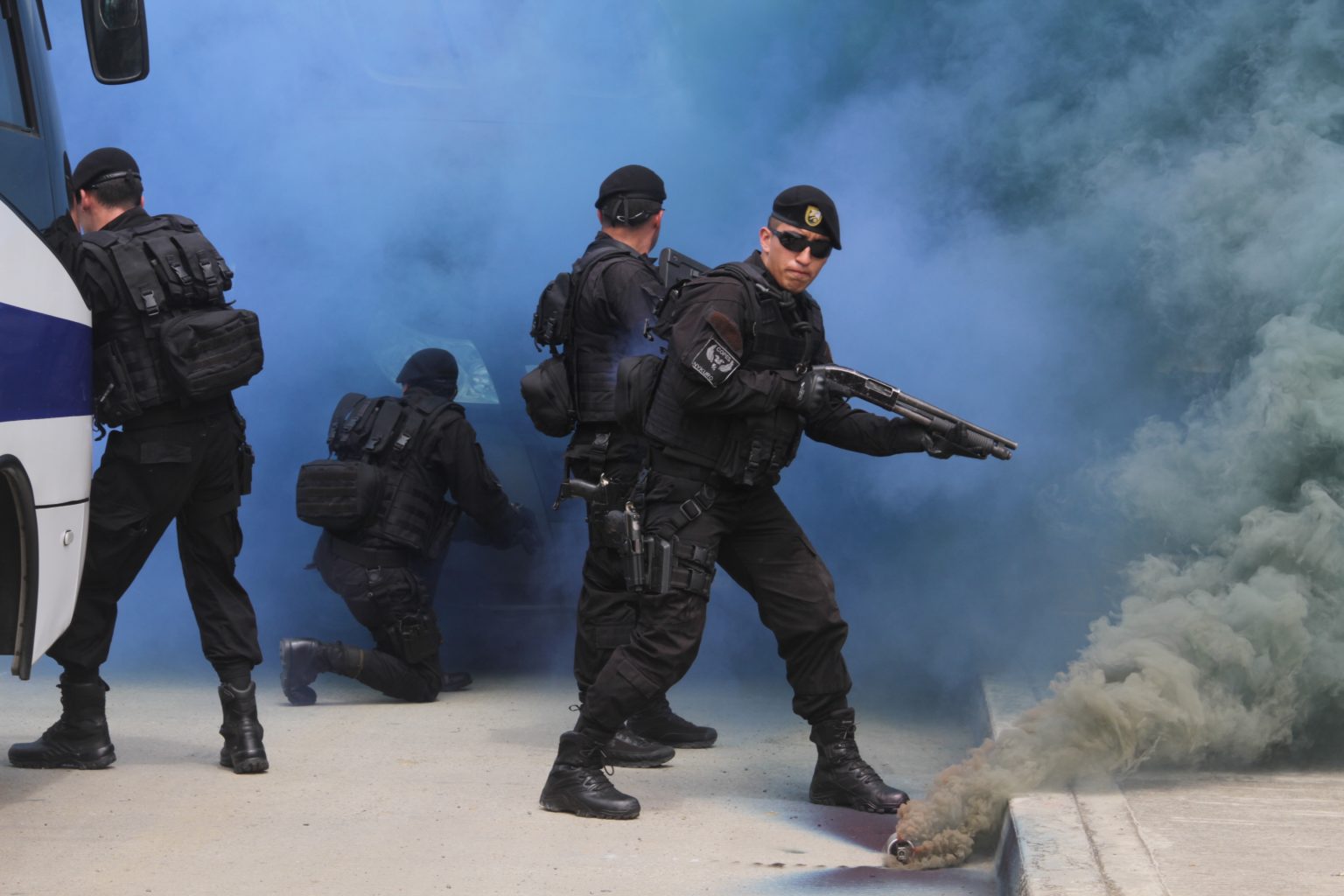 The British embassy in Bogotá is financing a new public relations campaign to “improve perceptions” of the U.K. in Colombia, Declassified can reveal.

The project has been launched while the U.K. is supporting the repressive Colombian security forces.

According to Foreign Office documents released to Declassified, the U.K. embassy spent £6,000 in 2019-20 to conduct a “perception analysis of the U.K.’s soft power in Colombia” which helped in “identifying future interests to combine in public messaging and social media.”

Polls of Colombians were undertaken “which helped the Embassy devise the most effective approach.”

After survey data emerged, Colin Martin-Reynolds, the British ambassador in Colombia since 2019, assigned £25,000 to create a new “environmental and biodiversity awareness campaign.”

The centerpiece would be a new U.K.-Colombia “season” to be called U.K.COL2021. It was officially launched in June.

At the time, Colombian police were putting down protests, which resulted in 63 people being killed, according to Human Rights Watch. The U.K. embassy in Bogotá made no statement condemning the killings.

From 2015-20, the U.K.’s National Crime Agency trained Colombia’s police in a multimillion-pound five-year program that is shrouded in secrecy, while a U.K. military team of up to nine soldiers is also “assisting” the Colombian police.

This team also supports the Colombian armed forces, which have killed thousands of civilians.

Colombia is an important ally for Britain in South America, with a number of major mining companies listed on the London Stock Exchange operating in the country.

The president of Colombia, Iván Duque, who has been in power since 2018, represents the right-wing Democratic Centre Party (PCD) and is viewed as the chosen successor of controversial former President Álvaro Uribe.

Uribe founded the PCD in 2013 as a reaction against the negotiations then taking place between the government and left-wing rebels which sought to put an end to the long-running civil war. 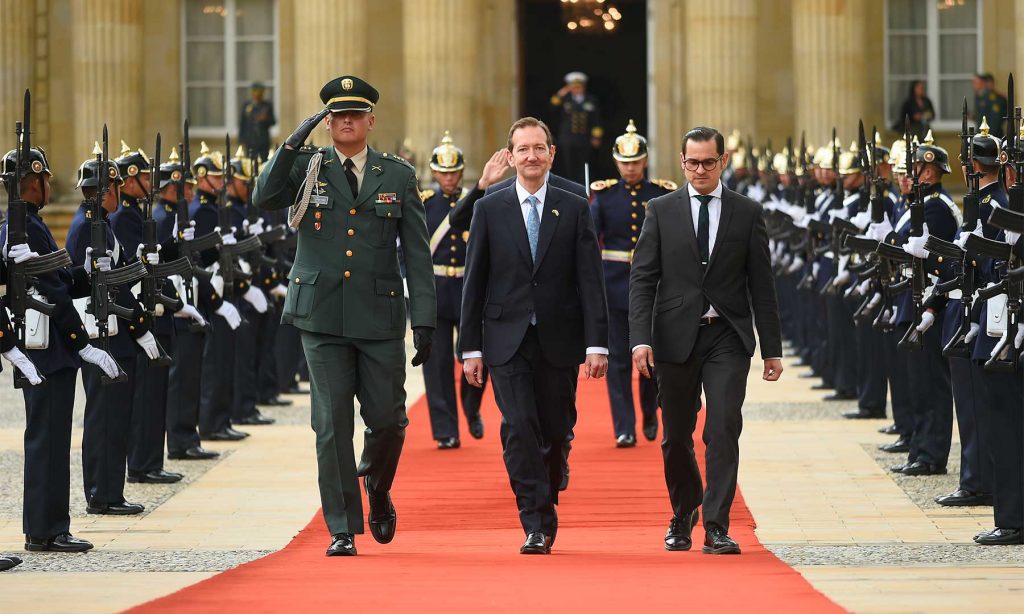 The documents note that the new U.K.COL2021 project, alongside some existing programs, would allow the embassy to “foster relationships and increase visibility — particularly to new audiences” as well as “overhaul outdated perceptions.”

They add that the new “commitment to the U.K.’s soft power strength in Colombia” would allow Britain “to create a pipeline for future influence and better understanding of the U.K. amongst younger generations of Colombian and other non-traditional audiences.”

The “long-term aim”, the British embassy in Bogotá notes, is “to establish new networks of influence and connections with more diverse audiences in Colombia … which would result in improved perceptions and changed behaviour towards the U.K.” It adds “the main vehicle” for this will be U.K.COL2021 whose “main focus” would be the environment.

The new perception management strategy was developed by a “local consultant” because the U.K. embassy in Bogotá “lacked specific expertise in strategic comms and the necessary connection with local media to implement such a strategy effectively.”

The embassy noted that the project includes “a number of areas of joint work with key Colombian stakeholders” through which the embassy would seek to “boost” its profile during 2021. Areas of coordination included “security and defence.”

The documents also state that “as part of the groundwork for 2021,” the U.K. embassy hired a local communications agency to set up “a series of conversations with local high profile activists with the [U.K.] Ambassador.” These had “an environmental angle and helped the Embassy to boost U.K. connections, with the Ambassador able to reach a younger audience.”

It added: “The engagement and access to an expanded network also allowed the Embassy to [have] much greater impact in other areas”, giving the example of a “specific case of [a] young environmental activist who was under threat from armed groups, drawing government attention to the case.”

Over half of the murders of environmental defenders around the world in 2020 were in Colombia, with some linked to those fighting U.K. corporate projects in the country.

A report last year found 44 percent of recent attacks connected to businesses in Colombia were against defenders who raised concerns about five companies. These included Cerrejón Coal — which is jointly owned by London-listed mining companies BHP, Anglo American and Glencore — and AngloGold Ashanti, also listed in London.

Last year, David Boyd, the UN special rapporteur on human rights and the environment, said the Cerrejón coal mine had “seriously damaged the environment and health of the country’s largest indigenous community.”

The local Colombian communications agency contracted by the U.K. embassy also set up a schools programme for YouTubers, again focused on the environment, which “expanded the Embassy’s network with a much younger base.”

The new information comes from a project list for a Foreign Office program in Colombia called “Frontline Diplomatic Enabling Activity,” which the U.K. government describes as a “small pot of money that [embassies] receive and have authority over to spend on projects supporting [embassy] activity.”

The perception management campaign was the most expensive project run through this program in Colombia in 2019-20. 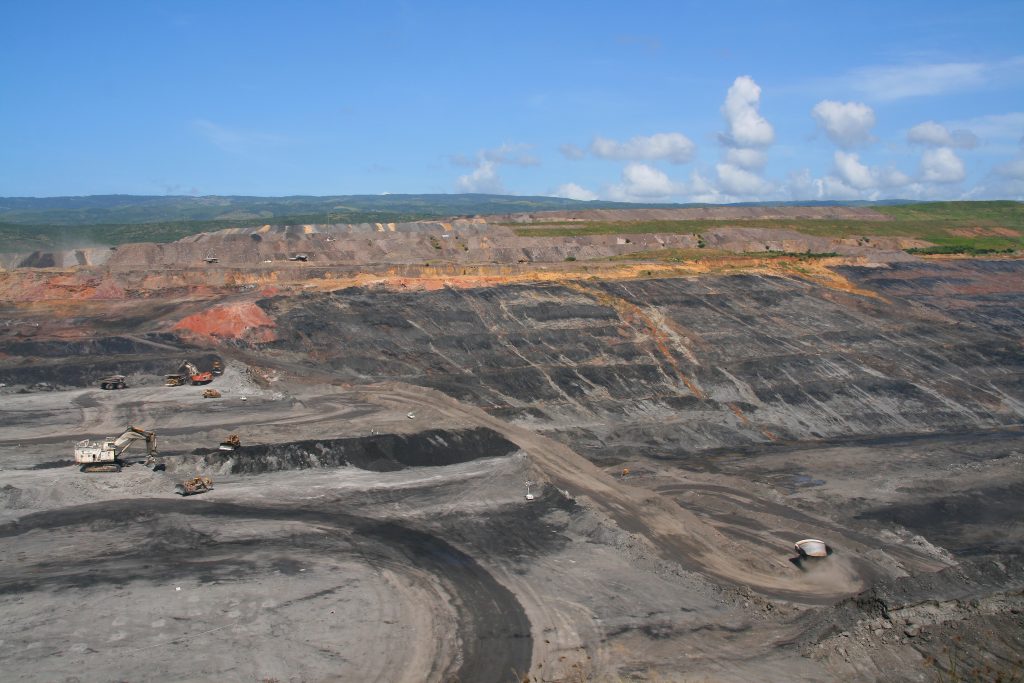 Machines at work at the El Cerrejón coal mine which is owned by three London-listed companies. (Creative Commons)

British investors appear to be a priority in the new U.K.COL2021 programme. At its launch in June, Colombia’s vice minister of foreign affairs, Francisco Echeverri, referred to the U.K. as “a historical ally” of Colombia and “our third most important investor.”

At the same event, Flavia Santoro, president of ProColombia, a government agency promoting foreign investment, said U.K.COL2021 marked a “milestone” in the relationship between the two countries, adding that “we have set goals aimed at increasing business in terms of British investment.”

One event during the launch of U.K.COL2021 presented a portfolio of 83 investment opportunities in Colombia in sectors such as agribusiness and energy.

After the event, ambassador Martin-Reynolds said in a video message hash-tagged #U.K.COL2021: “The message was clear and encouraging: despite the current challenging times, Colombia remains one of the most attractive markets in the region for U.K. companies and investors.”

“The work that the Colombian government has done and continues to do to provide a safe environment in terms of sustainable investment … is really helping to provide long-term certainty to our investors and profitable opportunities for U.K. suppliers.”

Before being appointed ambassador, Martin-Reynolds had been the Foreign Office’s chief information officer from 2013-18, which saw him “leading a major transformation programme overhauling how the Ministry, its global network and its diplomats exploit knowledge through technology.”

“The failure of the British government to issue an unequivocal public condemnation of the recent abuses committed by the Colombian police was stark. In less than two months 43 protesters were reportedly killed, over 80 people with eye injuries from police projectiles and 28 cases of sexual assault. In addition, there were thousands of arbitrary arrests.”

“If there is a desire to improve the profile of Britain in Colombia, then from the ambassador to ministers there needs to be far more outspoken criticism of the Colombian government’s flagrant disregard for human rights and the right to protest.”

The U.K. Foreign Office did not respond to a request for comment.

Matt Kennard is chief investigator at Declassified U.K.. He was a fellow and then director at the Centre for Investigative Journalism in London. Follow him on Twitter @kennardmatt.