There’s a lot of money to be made selling cures for the psychological wounds inflicted by the very system which enables that sale, writes Caitlin Johnstone. 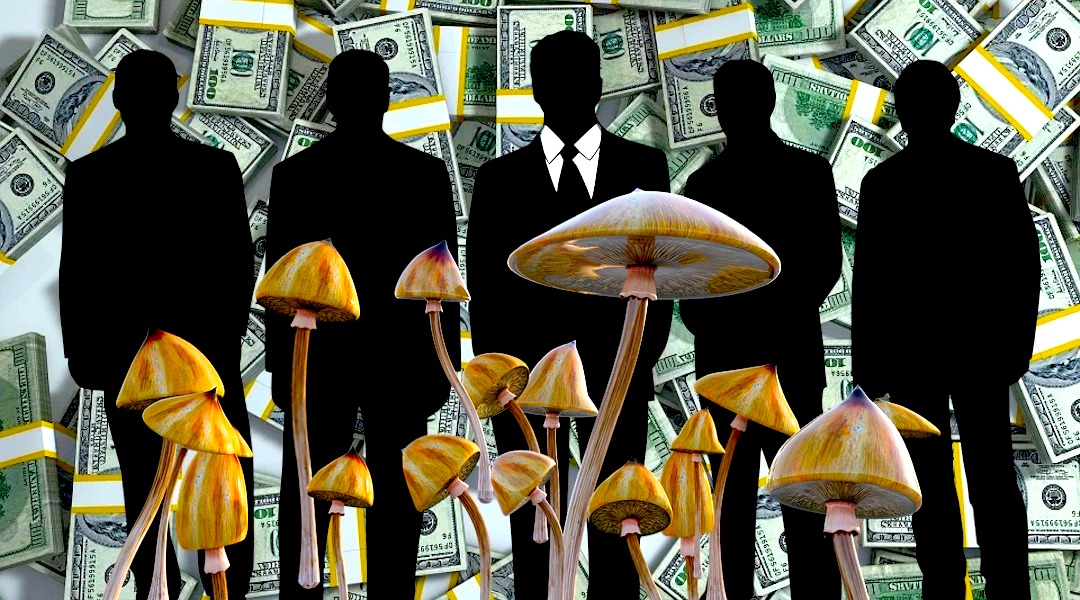 “Money has begun flowing into companies intending to monetize psychedelic therapy as new research has increasingly shown that blowing one’s mind can alter it for the better,” reads an article in The Los Angeles Times titled “Money is pouring into psychedelics. Meet the mystical hedge fund investor bankrolling the boom.”

“This scientific and commercial excitement rests on research showing that psychedelics can supercharge mental health treatment for PTSD, depression, anxiety, addiction, and other chronic ailments of the mind, enabling patients to dive deep, confront their traumas and — a rarity for mental illnesses — return healed,” the article reads. “That goes for synthetic chemicals such as MDMA and ketamine as well as plant-derived drugs such as psilocybin (the active ingredient in magic mushrooms), the South American plant brew ayahuasca, and the West African root-derived substance iboga.”

LA Times’ Sam Dean shares the personal journey of hedge fund investor Sa’ad Shah and his involvement in what has become a multibillion-dollar psychedelics industry long before even the legal infrastructure necessary for such companies to turn a profit is in place. We learn of Shah’s experience with ayahuasca, his interest in mystical traditions and personal growth, and his conviction in the shift that has for the last few years been known as the psychedelic renaissance.

And then, about halfway down the article, we get to the actual meat of the matter:

“Shah welcomes big pharma and big institutions to enter the fray in the interest of spreading the chemical gospel far and wide. He sees the financial and therapeutic potential for psychedelics not in the cannabis model, which would make psychedelics broadly available for retail purchase, but in the pharmaceutical mode — psychedelics as prescribed drugs, with patent rights, administered in medical settings.”

That “with patent rights” bit right there is behind the so-called psychedelic renaissance we’ve been hearing so much about: “favoring the FDA regulatory route over the Oregon route,” as a psychiatrist cited in the article put it. It’s being driven not by the need to free human consciousness from the prohibition-induced coma it’s been under since the sixties so that we can collectively navigate through the many existential hurdles our species is fast approaching with wisdom and insight, but by the agenda to make rich people even richer by forcefully controlling psychedelic substances via the pharmaceutical industry.

"[A] psychedelic renaissance has bloomed in the business world. Money has begun flowing into companies intending to monetize psychedelic therapy as new research has increasingly shown that blowing one’s mind can alter it for the better." @SamAugustDean https://t.co/vvVtoAh7bj

And I’ll take it a step further and say that the recent mainstreaming of psychedelics is also due to the fact that the abusive nature of capitalism is causing a widespread mental health crisis that our rulers have a vested interest in preventing so the slaves will keep turning the gears of the machine.

But this is changing. We’re now seeing support for psychedelic use from the same plutocratic class and its corporate media who always work to maintain the status quo upon which their kingdoms are built.

So, what changed? The situation changed. Global capitalist institutions are acutely aware that Western civilization is in the midst of a mental health crisis that only looks likely to get worse, with depression, anxiety disorders and substance abuse skyrocketing on myriad fronts for years. The increasingly widespread use of antidepressants has not led to an overall decline in symptoms and prevalence of mood disorders in the U.S., Australia, Canada, England and other wealthy countries. In America young people have been growing progressively more depressed and anxious for over 80 years, and no one knows why.

They'll make you poor,
then shame you for being poor,
then push you into a job that keeps you poor
at a billionaire megacorporation.

They'll make you crazy,
then shame you for being crazy,
then sell you the cure for crazy
at eighty bucks a pill.https://t.co/vI8ljB5sQ9

Well, I could hazard a guess why.

I would guess that continually pummeling people’s minds with messaging that they are inadequate if they don’t look a certain way, own the right products and make enough money is bad for their psychological health.

I would guess that hammering people with bootstrapping fallacies and telling them that they’re the problem if they can’t keep their head above water in a system that’s rigged against them drives people a bit crazy.

I would guess that a nonstop barrage of mass media propaganda shamelessly lying to people and telling them that everything’s fine when it clearly isn’t and that endless human butchery by the military is perfectly normal takes a toll on their psychological wellbeing.

I would guess that a population growing poorer and poorer and having more and more of its power taken away from as serfs under a corporate oligarchy would be alienating and depressing.

I would guess that working long hours at meaningless gear-turning for an amoral corporate machine while being inundated with artificial mainstream culture manufactured in Hollywood, New York and Langley is soul-destroying.

So, our mental health is deteriorating, the solutions that our systems have been offering are not working, and in fact it’s likely that the deterioration of mental health is due primarily to the abusive nature of those very systems. But the capitalism machine still needs workers, and those workers won’t turn the gears if they can’t get out of bed in the morning.

So desperate measures have been called in. Give the gear-turners tightly controlled doses of psychedelics, enough to get them functional but not enough to awaken them to the reality of their enslavement, and hopefully you’ve built some systemic scaffolding which enables their minds to put up with the relentless mass-scale psychological abuse that the status quo requires.

And made a massive fortune in the process. There’s a lot of money to be made selling cures for the psychological wounds inflicted by the very system which enables that sale.

“May the small candle of consciousness in the void that is humanity, never go out” @elonmusk

“ I think, generally, that people should be open to psychedelics.”#codecon pic.twitter.com/pgAVxJWv61

This is why nearly all of the chatter we are seeing about psychedelics is about fixing people’s psychological problems instead of helping them to attain self-actualization, transformation, transcendence and enlightenment. It’s not about waking people up, it’s about turning them from broken cogs into useful cogs. It’s not to free them from the machine but to help them better serve it, while also serving the interests of clever pharmaceutical investors.

Psychedelics are useful not for the hallucinations they provide but for the hallucinations they remove. At the shallower end of the pool, they can help dispel the psychological illusions which feed into our depression, anxiety and PTSD. At the deep end they have the potential to remove our fundamental hallucinations about ego, mind, separation and consciousness. The gamble appears to be premised on building a high fence to keep everyone playing in the shallow end of the pool, where they are useful.

But, as people often point out to me whenever I highlight this, that plan can easily backfire. You’re not dealing with something mundane and predictable here, you’re dealing with the most uncharted terrain in human consciousness. There’s a lot of wiggle room for miracles in that space.

If psychedelics were anything other than a threat to the status quo they wouldn’t have been banned for half a century and the CIA would still be dosing the public with LSD. It will be interesting to see how this thing unfolds. Maybe this time they finally bit off more than they can chew.