Margaret Hu calls it a lesson in the life-and-death consequences of data collection in conflict zones. 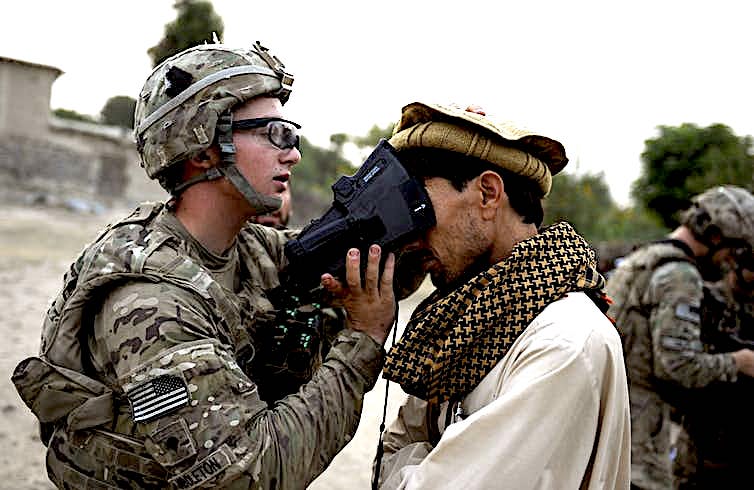 U.S. Army soldier scans the irises of an Afghan civilian in 2012 as part of an effort by the military to collect biometric information from much of the Afghan population. (Jose Cabezas/AFP via GettyImages)

This article, first published by The Conversation, reveals that the U.S. occupiers took 4.8 million records of biometric data from Afghans in what can only be seen as a humiliation of a nation’s people.  Americans might imagine what it would be like for them to be subjected to this by a foreign power on their own soil. That the Taliban may now have access to this data to pursue collaborators should be seen as consequence of the U.S. imperial project. Towards the end of the article the author writes: “The Pentagon should use this as an opportunity to question whether it was necessary to collect the biometric data in the first instance.”  The U.S. accuses WikiLeaks publisher Julian Assange of revealing the names of its informants, when he was actually redacting them. Now they’ve left many of those names, and their iris scans, behind.

In the wake of the Taliban’s takeover of Kabul and the ouster of the Afghan national government, alarming reports indicate that the insurgents could potentially access biometric data collected by the U.S. to track Afghans, including people who worked for U.S. and coalition forces.

Afghans who once supported the U.S. have been attempting to hide or destroy physical and digital evidence of their identities. Many Afghans fear that the identity documents and databases storing personally identifiable data could be transformed into death warrants in the hands of the Taliban.

This potential data breach underscores that data protection in zones of conflict, especially biometric data and databases that connect online activity to physical locations, can be a matter of life and death. My research and the work of journalists and privacy advocates who study biometric cybersurveillance anticipated these data privacy and security risks.

Investigative journalist Annie Jacobson documented the birth of biometric-driven warfare in Afghanistan following the terrorist attacks on Sept. 11, 2001, in her book First Platoon. The Department of Defense quickly viewed biometric data and what it called “identity dominance” as the cornerstone of multiple counterterrorism and counterinsurgency strategies. Identity dominance means being able to keep track of people the military considers a potential threat regardless of aliases, and ultimately denying organizations the ability to use anonymity to hide their activities.

By 2004, thousands of U.S. military personnel had been trained to collect biometric data to support the wars in Afghanistan and Iraq. By 2007, U.S. forces were collecting biometric data primarily through mobile devices such as the Biometric Automated Toolset (BAT) and Handheld Interagency Identity Detection Equipment (HIIDE).

In addition to biometric data, the system includes biographic and contextual data such as criminal and terrorist watchlist records, enabling users to determine if an individual is flagged in the system as a suspect. Intelligence analysts can also use the system to monitor people’s movements and activities by tracking biometric data recorded by troops in the field.

By 2011, a decade after 9/11, the Department of Defense maintained approximately 4.8 million biometric records of people in Afghanistan and Iraq, with about 630,000 of the records collected using HIIDE devices. Also by that time, the U.S. Army and its military partners in the Afghan government were using biometric-enabled intelligence or biometric cyberintelligence on the battlefield to identify and track insurgents.

In 2013, the U.S. Army and Marine Corps used the Biometric Enrollment and Screening Device, which enrolled the iris scans, fingerprints and digital face photos of “persons of interest” in Afghanistan. That device was replaced by the Identity Dominance System-Marine Corps in 2017, which uses a laptop with biometric data collection sensors, known as the Secure Electronic Enrollment Kit.

Over the years, to support these military objectives, the Department of Defense aimed to create a biometric database on 80 percent of the Afghan population, approximately 32 million people at today’s population level. It is unclear how close the military came to this goal.

In addition to the use of biometric data by the U.S. and Afghan military for security purposes, the Department of Defense and the Afghan government eventually adopted the technologies for a range of day-to-day governmental uses. These included evidence for criminal prosecution, clearing Afghan workers for employment and election security.

In addition, the Afghan National ID system and voter registration databases contained sensitive data, including ethnicity data. The Afghan ID, the e-Tazkira, is an electronic identification document that includes biometric data, which increases the privacy risks posed by Taliban access to the National ID system.

However, it’s possible the Taliban could turn to longtime ally Inter-Services Intelligence, Pakistan’s intelligence agency, for help getting at the data. Like many national intelligence services, ISI likely has the necessary technology.

Another report indicated that the Taliban have already started to deploy a “biometrics machine” to conduct “house-to-house inspections” to identify former Afghan officials and security forces. This is consistent with prior Afghan news reports that described the Taliban subjecting bus passengers to biometric screening and using biometric data to target Afghan security forces for kidnapping and assassination.

For years following 9/11, researchers, activists and policymakers raised concerns that the mass collection, storage and analysis of sensitive biometric data posed dangers to privacy rights and human rights. Reports of the Taliban potentially accessing U.S. biometric data stored by the military show that those concerns were not unfounded.

They reveal potential cybersecurity vulnerabilities in the U.S. military’s biometric systems. In particular, the situation raises questions about the security of the mobile biometric data collection devices used in Afghanistan.

The data privacy and cybersecurity concerns surrounding Taliban access to U.S. and former Afghan government databases are a warning for the future. In building biometric-driven warfare technologies and protocols, it appears that the U.S. Department of Defense assumed the Afghan government would have the minimum level of stability needed to protect the data.

The U.S. military should assume that any sensitive data — biometric and biographical data, wiretap data and communications, geolocation data, government records — could potentially fall into enemy hands. In addition to building robust security to protect against unauthorized access, the Pentagon should use this as an opportunity to question whether it was necessary to collect the biometric data in the first instance.

Understanding the unintended consequences of the U.S. experiment in biometric-driven warfare and biometric cyberintelligence is critically important for determining whether and how the military should collect biometric information. In the case of Afghanistan, the biometric data that the U.S. military and the Afghan government had been using to track the Taliban could one day soon – if it’s not already – be used by the Taliban to track Afghans who supported the U.S.

Margaret Hu is professor of law and of international affairs at Penn State.

7 comments for “US Collected 4.8 Million Biometric Records of Afghans”