Some fear this latest airstrike in Kabul could presage the future of U.S. involvement in Afghanistan if the Biden administration does not prioritize civilian protection. 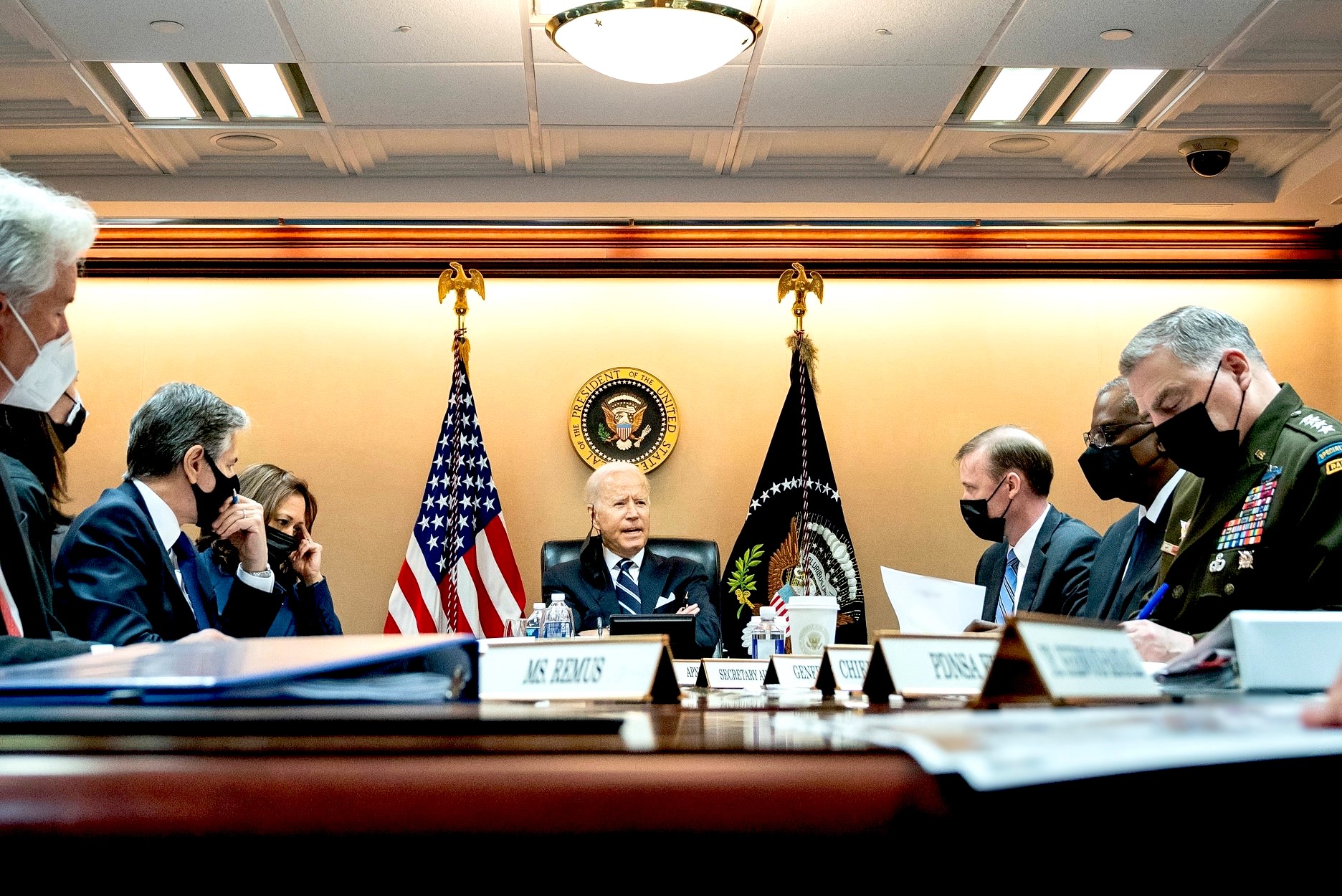 U.S. President Joe Biden discussing the fall of Kabul with the National Security Council on Aug. 18. (The White House)

The largest Muslim civil rights organization in the United States has demanded that the Biden administration immediately put in place a “moratorium on drone warfare” after the U.S. killed at least 10 Afghan civilians—including half a dozen children—with an airstrike in Kabul over the weekend.

“Enough is enough,” Edward Ahmed Mitchell, national deputy director of the Council on American-Islamic Relations (CAIR), said in a statement. “For more than ten years, our government’s drone strikes have killed thousands of innocent people in Pakistan, Afghanistan, Yemen, and elsewhere in the Muslim world—destroying family homes, wedding parties, and even funeral processions. The civilian casualties in Kabul are simply the latest victims of this misused technology.”

Mitchell said the Biden administration should impose a temporary moratorium on the U.S. drone program — which is largely shrouded in secrecy — “until the government establishes strict oversight rules that would prevent these tragedies by severely limiting and transparently accounting for our military’s use of drone warfare.”

According to press reports and accounts from relatives and witnesses, the 10 people reportedly killed by the U.S. airstrike in Kabul on Sunday were all members of a single extended family — and at least three of the child victims were girls just 2 years old or younger.

US imperialists killed seven children and three adults in a drone strike yesterday in Afghanistan. US war on Afghanistan began like that and ends like that. Imperialism is rooted in a disregard for basic human decency. Here are four of the children who were murdered: pic.twitter.com/W0O7krNjEp

“This is the latest in 20 years of innocent lives taken and children orphaned in Afghanistan and covert drone warfare around the world,” Rep. Ilhan Omar (D-Minn.) said Monday. “Impunity for these attacks continues to create a never-ending cycle of violence and retribution. Where should these victims go to seek justice?”

The Biden administration has yet to take responsibility for killing the civilians with its drone strike, which purportedly targeted an explosive-laden vehicle that the U.S. military claims ISIS-K was planning to use in another attack on Kabul’s international airport.

Maj. Gen. Hank Taylor, deputy director of the U.S. Joint Staff for Regional Operations, said during a press briefing on Monday that the Pentagon is “aware” of reports of civilian deaths in Kabul and that an investigation is underway.

In a statement, Amnesty International USA executive director Paul O’Brien said that the Biden administration “has a responsibility to the families of those killed to name the dead, acknowledge its actions, investigate, and provide reparations.”

The Pentagon is notorious for dramatically undercounting the number of civilians killed in U.S. military operations overseas. And when the U.S. government does admit to killing civilians, it often refuses to provide any compensation to the victims’ families.

Jet fighters circle the skies of #Kabul as the U.S. withdrawal concludes, and family members attending a mass funeral for the 10 they say were killed in a U.S. drone strike – look up and weep as the roar of the jet engines never ends. #afghanistanhttps://t.co/BxSHCpqqqr pic.twitter.com/7WxNRYgTU8

“The United States has been killing civilians in Afghanistan, Pakistan, Syria, and Somalia for years, under the guise of the so-called war on terror, with impunity,” said O’Brien. “For two decades, the United States has carried out strikes with no accountability to the public for how many civilians were killed.”

The latest airstrike in Kabul, O’Brien argued, could be “a glimpse into the future U.S. involvement in Afghanistan if the Biden administration pushes ahead with an ‘over the horizon’ counter-terrorism program that does not prioritize civilian protection.”

Earlier this year, the Biden administration quietly implemented temporary restrictions on drone strikes outside of “conventional battlefield zones” such as Afghanistan. But such limits did not stop U.S. military’s Africa Command (AFRICOM) from launching a lethal drone strike in Somalia in July, the first attack on that country of Joe Biden’s presidency.

It appears that Biden is prepared to keep carrying out drone strikes in Afghanistan in the future. In a statement Friday after the U.S. launched a drone strike targeting two “planners and facilitators” of the deadly attack on Kabul’s airport, Biden declared, “This strike was not the last.”

4 comments for “Call for Drone Moratorium After Latest Civilian Killings”