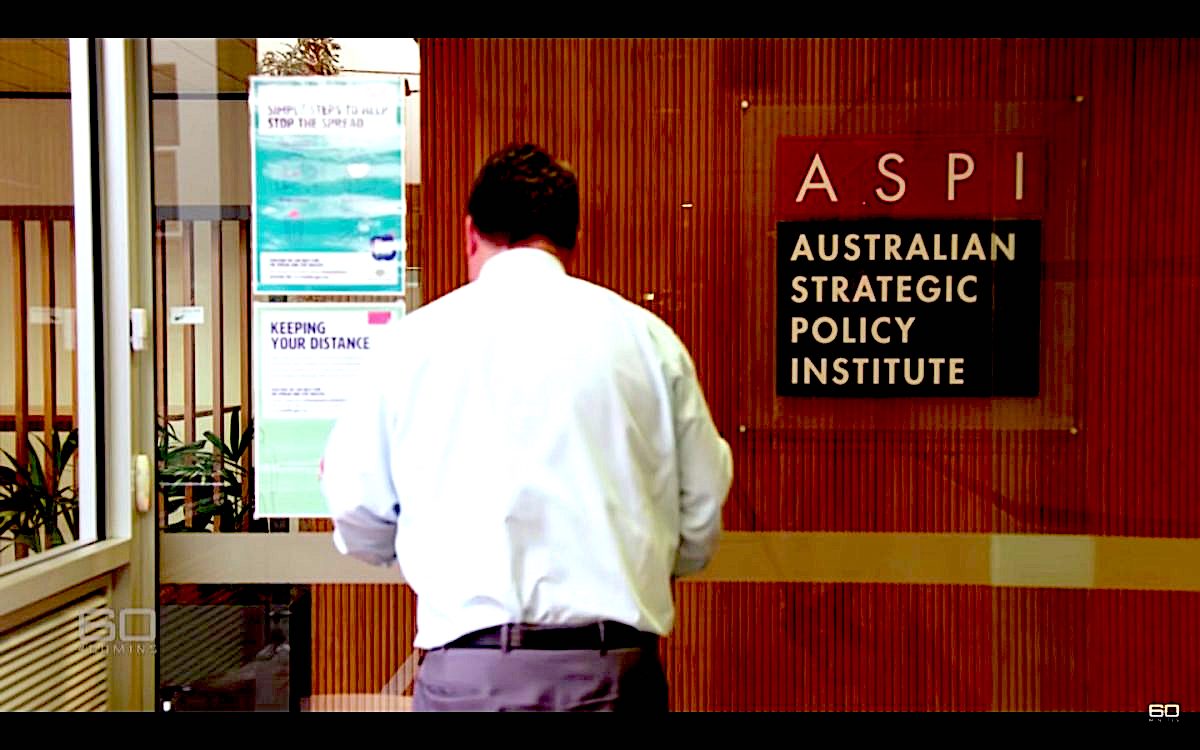 One of the weirdest things about the mass media propaganda that manipulates the way people think, act and vote to maintain the status quo is that mainstream news outlets routinely cite the employees of think tanks that are sponsored by war profiteers and government powers as expert sources for their reports. And they just get away with it.

To pick one of nearly infinite possible examples, here in Australia the Murdoch press are currently citing a report generated through the funding of governments and weapons manufacturers to whip up public hysteria about the ridiculous fantasy that China might attack us.

The most egregious of these is a write-up from Sky News with the headline, “Lowy Institute report: China possesses ability to ‘strike Australia’ with long-range missiles, bombers.“

On social media Sky News is sharing this story with the even more incendiary caption “China now has the military arsenal to pose the greatest threat to the Australian mainland since World War II, experts warn.”

China now has the military arsenal to pose the greatest threat to the Australian mainland since World War II, experts warn.https://t.co/FL30u21gpP

The “experts” in question are the Lowy Institute, named after its billionaire founder, which is funded by multiple branches of the Australian government including ASIO and the Department of Defence, by major financial institutions and by weapons manufacturers like Boeing.

The author of the Lowy Institute report  is Thomas Shugart, himself an employee of the notorious Center for a New American Security, a Biden administration-aligned warmongering think tank that receives funding from top war profiteers Boeing, General Dynamics, Lockheed Martin, Northrop Grumman and Raytheon, as well as the U.S. State Department and numerous other governments.

So, in summary, government agencies and war profiteers paid for a report which manufactures consent for their agendas among policymakers and the public, and mass media institutions passed this off as “news.”

And this is exactly what these think tanks exist to do: cook up narratives which benefit their immensely powerful and unfathomably psychopathic sponsors, and insert those narratives at key points of influence.

“Think tank” is a good and accurate label, not because a great deal of thought happens in them, but because they’re dedicated to controlling what people think, and because they are artificial enclosures for slimy creatures. Their job, generally speaking, is to concoct and market reasons why it would be good and smart to do something evil and stupid.

And it works. Because of the efforts of warmonger-funded think tanks like the Lowy Institute, Center for a New American Security, and the profoundly odious Australian Strategic Policy Institute (ASPI), more and more Australian brains are being turned into soup by ridiculous propaganda narratives about China posing a meaningful threat to them.

As The Conversation highlighted last month, a poll conducted by that same Lowy Institute claims that “only 16% of surveyed Australians [express] trust in China compared with 52% just three years ago,” that a “similar number of Australians think China will launch an armed attack on Australia (42%) as on Taiwan (49%),” and that “more Australians (13%) than Taiwanese (4%) think a Chinese invasion of Taiwan is likely sometime soon.”

You can understand why the Lowy Institute would want to show off numbers like that to potential sponsors, and I wouldn’t be surprised if they are entirely accurate; I’ve started conversations with complete strangers here in Victoria recently and seen them start babbling about how awful China is within a few minutes, completely out of the blue. It’s like watching a zombie outbreak in real time.

And this is of course entirely by design. Because of its useful geostrategic location in relation to China, Australia has been turned into a functional U.S. military/intelligence asset so crucial that multiple coups have been instituted here to ensure we remain aligned with the Pentagon against Beijing. You can’t have the locals meddling with the gears of your war machine with pesky little nuisances like the democratic process, so you’ve got to keep them aggressively propagandized.

This is why our consciousness is continually pummeled with think tank-manufactured narratives about China. An attention-grabbing headline about the big scary Chinese boogeyman will almost always be authored by a sleazy think tank denizen or be based on the work of one.

A few weeks ago 60 Minutes Australia ran an unbelievably hysterical segment branding New Zealand “New Xi-Land” because its government didn’t perfectly align with Washington on one particular aspect of its Cold War agenda, and it featured an interview with an Australian Strategic Policy Institute spinmeister as well as the actual ASPI office.

The Australian Strategic Policy Institute is cited by mass media outlets around the world and is funded by, you guessed it, governments and war profiteers. According to APAC News’ Marcus Reubenstein, ASPI is funded by all the usual weapons manufacturers, by the U.S. State Department and other governments.

“ASPI has received funding from the governments of Britain, Japan and Taiwan as well as NATO,” Reubenstein writes. “Among its corporate supporters are global weapons makers Thales, BAE Systems, Raytheon, SAAB, Northrop Grumman, MDBA Missile Systems and Naval Group. Yet their contribution of over $330,000 last year is dwarfed by that of a handful of government departments and agencies.”

Media citation of warmonger-funded think tanks is common throughout the Western world. Government-sponsored imperialist spin factories like Bellingcat are routinely cited by the mainstream media, and those citations are leant credibility by the fawning puff pieces which those media institutions regularly churn out about the propaganda firm.

I just grabbed a New York Times article at random about the events transpiring in Afghanistan and found its author citing the chief executive of the Center for a New American Security arguing against the Biden administration’s troop withdrawal, as well as a Center for American Progress employee arguing that the Taliban takeover could cause a PR nightmare. Center for American Progress is also partly funded by the war industry.

The fact that disguising statements by propagandists who are sponsored by governments and war profiteers is journalistic malpractice should be obvious to everyone in the world, and if media and education systems were doing their jobs instead of indoctrinating society into accepting the status quo, it would be. But propaganda only works if you don’t realize you’re being propagandized, and keeping people from realizing this is itself a part of the propaganda.

Make a fortune killing people and selling their bodies and you’d be remembered as the century’s worst monster. Make the same fortune selling the weapons used to kill the same number of people in wars you propagandized into existence and you’re a respected job creator.

← Undefinable: No Ideology & Belonging to No Camp
Rapid Taliban Takeover Shows How Little US Understood Afghanistan →