The Fairfax County, Virginia Board of Supervisors this week set up a task force to suggest renaming two major roads in the county named after Confederate generals, a topic discussed six years ago by CN‘s founding editor Robert Parry.

The task force will come up with new names for the Lee Highway and the Lee Jackson Memorial Highway, the first road named after Confederate General Robert E. Lee, and the second after Lee and Confederate General Stonewall Jackson, The Washington Post reported. Arlington County is about to rename its portion of the Lee Highway after John M. Langston, an abolitionist who was elected the first black Virginia congressman in the 1880s.

“In Fairfax County, our diversity is our greatest strength and it’s important that we honor and celebrate that diversity,” board Chairman Jeff C. McKay said in a statement. “We cannot ignore what the Lee and Lee Jackson Memorial Highway names represent in our community and especially to our African American neighbors.”

Robert Parry, the founding editor of Consortium News, was ahead of his time, arguing in this February 2015 piece, republished today, that Confederate leaders should not be honored with streets named after them. This was before the movement, now underway, to remove monuments and street names honoring defenders of slavery. Parry writes here about the Jefferson Davis Highway in Virginia and the resistance he met to his idea to change its name. In 2019 Arlington finally changed it to Richmond Highway.

CN‘s current editor’s residence is on Taney Avenue in Alexandria, Virginia, named after Supreme Court Chief Justice Roger B. Taney (1836-1864), who infamously ruled in 1857 with the majority to deny Dred Scott his freedom from slavery. In his written opinion, Taney decried “Northern aggression” against slavery, which he said was critical to “Southern life and values.” So far there is no indication that Alexandria is ready to join Arlington and Fairfax in erasing their connection to this shameful period of U.S. history.

A new study of Southern lynching of blacks, sharply raising the total to nearly 4,000 victims, adds some context to the decision in 1920 to attach the name of Confederate President Jefferson Davis to parts of Route One, including stretches near and through African-American neighborhoods. That period was a time when the number of lynchings surged across the South and whites were reasserting their impunity. [The Jefferson Davis Highway was a planned nationwide route.]

According to the study by the Equal Justice Initiative, the use of lynching mob killings and mutilations of blacks by hanging, burning alive, castration, torture and other means was nearly as high around 1920 as it was in the latter part of the Nineteenth Century. There was a gradual decline in lynchings in the early Twentieth Century, but the pattern reversed and the use of lynching surged to about 500 during a five-year period heading into 1920. 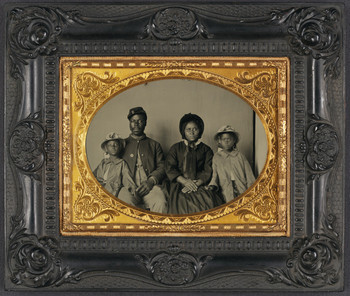 A Civil War-era African-American soldier and his family. (Encyclopedia Virginia)

That period also marked a determination by many Southern whites to reaffirm the rightness of the Confederate cause and to reassert white supremacy. Thus, in 1920, to drive home the point of who was in charge, the Daughters of the Confederacy had Southern states name portions of Route One after Jefferson Davis, who was hailed as the “champion of a slave society” when he was chosen to lead the Confederacy in 1861.

Besides honoring a dyed-in-the-wool white supremacist who favored keeping African-Americans in chains forever, the Daughters of the Confederacy saw these designations of Route One as a counterpoint to plans in the North for a Lincoln Highway in honor of assassinated President Abraham Lincoln.

But bestowing this honor on Jefferson Davis was also a political message of pro-Confederate defiance that was not limited to the brutal era of 1920. The Jefferson Davis designation was extended to parts of Route 110 near the Pentagon in Arlington, Virginia, in 1964 as Martin Luther King Jr. and the Civil Rights Movement were pressing for landmark civil rights legislation to end segregation and as white Virginian politicians were vowing to resist integration at all costs.

A year or so ago, I wrote to the five members of the Arlington County Board and urged them to seek an end to this grotesque honor bestowed on a notorious white racist. When my letter went public, it was treated with some amusement by the local paper, the Sun-Gazette, which described me as “rankled,” and prompted some hate mail.

One letter from an Arlington resident declared that it was now her turn to be “RANKLED by outsiders like Mr. Parry who want to change history because it is not to his liking. I am very proud of my Commonwealth’s history, but not of the current times, as I’m sure many others are.”

I was also confronted by a senior Democratic county official at a meeting about a different topic and urged to desist in my proposal to give the highway a new name because the idea would alienate state politicians in Richmond who would think that Arlington County was crazy.

But the new study on the terrorism of lynching reminds us that attaching Jefferson Davis’s name to roadways wasn’t just some romantic gesture to honor an historical figure beloved by Southern whites who in 1920 still pined for the ante-bellum days when they could own black people and do to them whatever they wished. 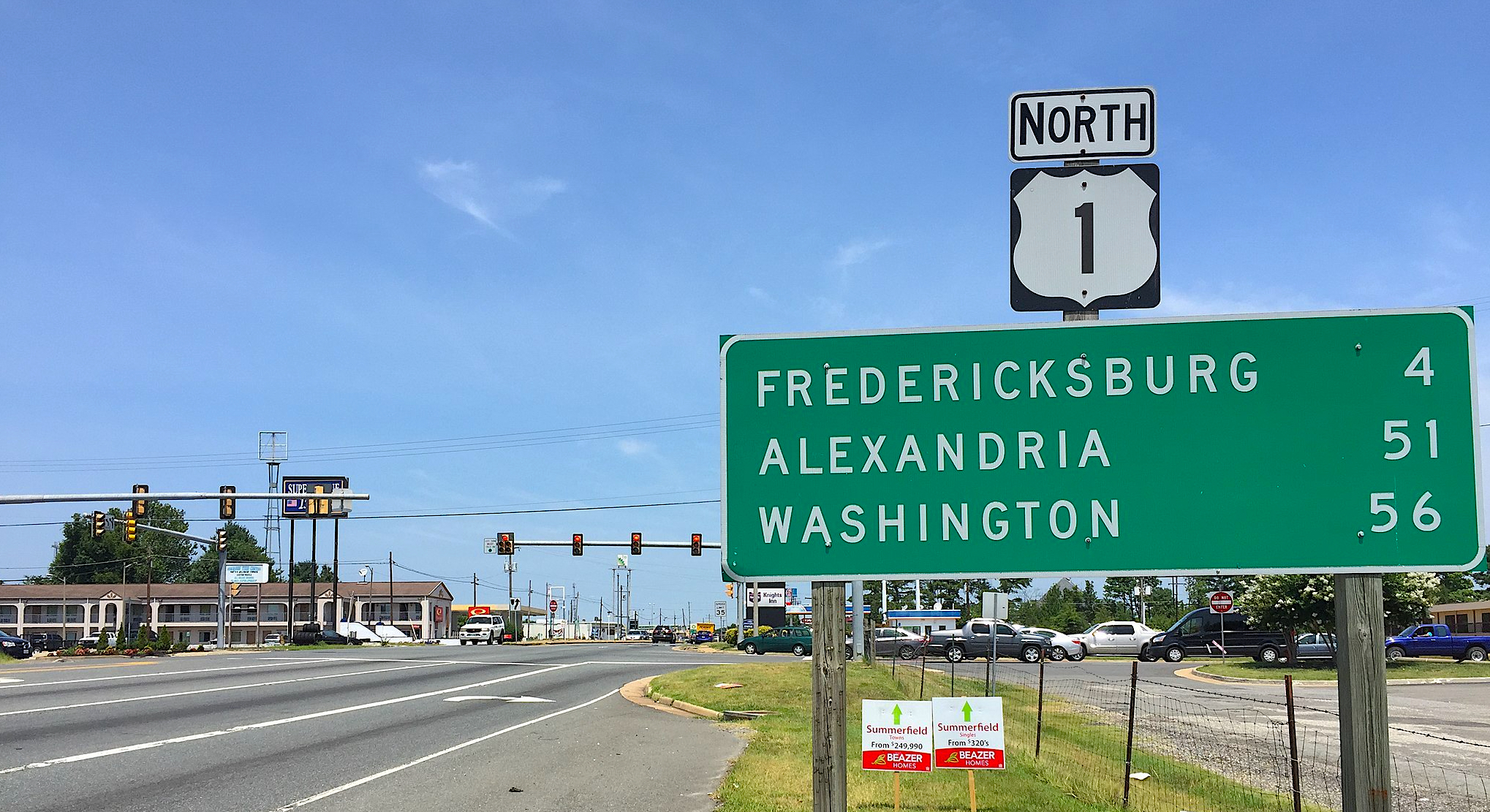 The years around 1920 marked a violent revival of the carnival-like scenes in which whites treated the lynching of blacks as a moment for community hilarity and celebration, often posing with their children for photographs next to the mutilated corpses. Stamping Jefferson Davis’s name on a highway that passed near and through black neighborhoods was another way to send a chilling message to African-Americans.

In my 37 years living in Virginia, I have always been struck by the curious victimhood of many Southern whites. Because of the Civil War, which some still call “the War of Northern Aggression,” and the Civil Rights Movement, which finally ended segregation, they have been nursing grievances, seeing themselves as the real victims here.

Not the African-Americans who were held in the unspeakable conditions of bondage until slavery was finally ended in the 1860s and who then suffered the cruelties of white terrorism and the humiliation of segregation for another century. No, the whites who lorded over them were the real “victims” because the federal government finally intervened to stop these practices.

Yet, while some white Virginians remain “very proud” of that history, there has been a studied neglect of other more honorable aspects of Arlington’s history, including the role played by Columbia Pike as an African-American Freedom Trail where thousands of former slaves, freed by Lincoln’s Emancipation Proclamation in 1863, traveled north to escape slavery.

Many were given refuge in Freedman’s Village, a semi-permanent refugee camp along Columbia Pike on land that now includes the Pentagon and the Air Force Memorial. Some of the men joined the U.S. Colored Troops training at nearby Camp Casey before returning to the South to fight for freedom, to end the scourge of slavery once and for all.

As blacks joined the Union Army, Confederate President Jefferson Davis ratified a policy that refused to treat black men as soldiers but rather as slaves in a state of insurrection, so they could be executed upon capture or sold into slavery.

In accordance with this Confederate policy, U.S. Colored Troops faced summary executions when captured in battle. For instance, when a Union garrison at Fort Pillow, Tennessee, was overrun by Confederate forces on April 12, 1864, black soldiers were shot down as they surrendered. Similar atrocities occurred at the Battle of Poison Springs, Arkansas, in April 1864, and the Battle of the Crater in Virginia. Scores of black prisoners were executed in Saltville, Virginia, on Oct. 2, 1864.

Yet, while Jefferson Davis’s name remains on roadways through Arlington — and as the Confederate president is effectively honored whenever people have to use his name — there is still no commemoration of Freedman’s Village (though something is supposedly being planned) and no one apparently even knows the precise location of Camp Casey, arguably one of Arlington’s most significant and noble historical sites. (Camp Casey is believed to have been located close to where today’s Pentagon now is, an area that in the 1860s was called Alexandria County before being renamed Arlington County in the Twentieth Century.)

Apparently, recognizing the place where free African-Americans were trained and armed to defeat the Confederacy and end slavery might “rankle” some white Arlington residents.

The late investigative reporter Robert Parry broke many of the Iran-Contra stories for The Associated Press and Newsweek in the 1980s and started Consortium News in 1995.

24 comments for “Lynching and the Jeff Davis Highway”