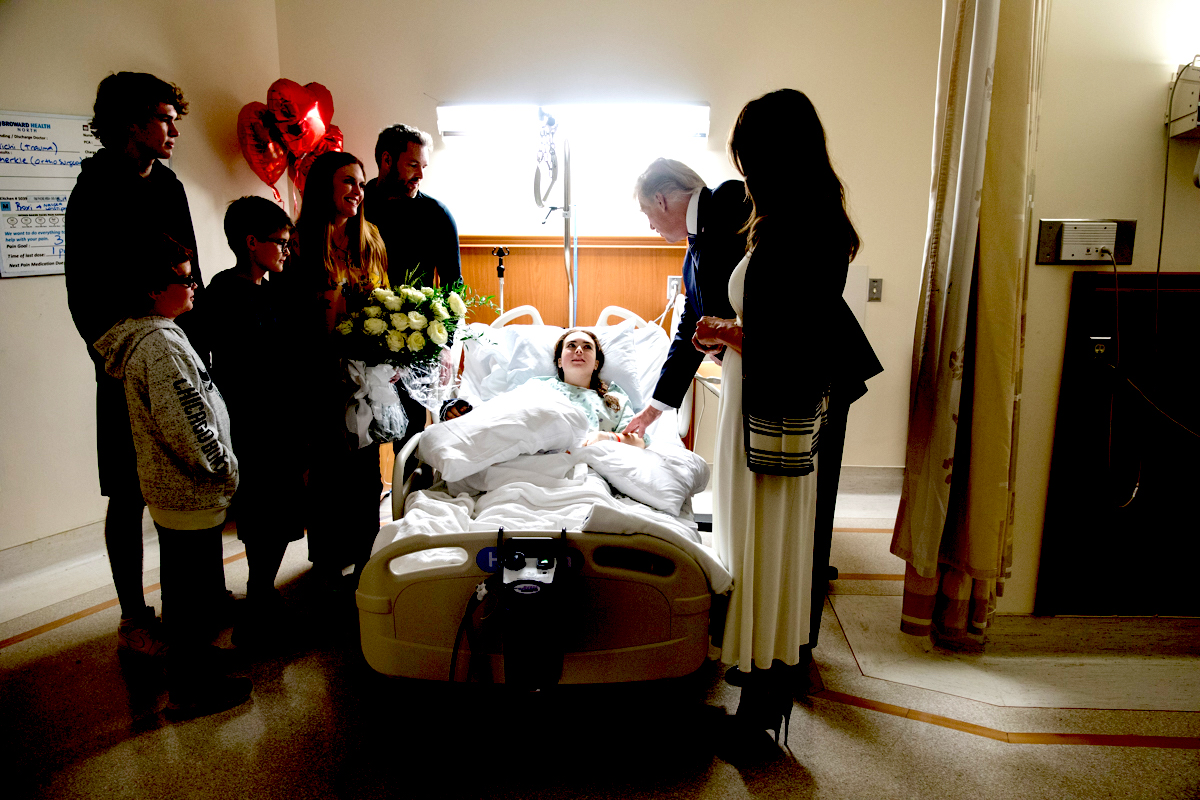 Back on July 22, 2012, I posted an analysis on the continuing affliction of American gun violence, noting the fact that there is a connection between the privately held 300 million firearms in the U.S.A., and the country having the highest gun-related homicide rate in the developed world. It is now almost nine years later, and the problem is still with us. Unfortunately, for this plague, there is no vaccine.

We are still at it. On March 16 eight people were killed at three Atlanta, Georgia, massage parlors, and on March 22 10 people were shot down in a Boulder, Colorado, grocery store. [See Wikipedia page tracking 2021 mass shootings.]

This is nothing new in the Land of the Free. Among the more notable victims of the nation’s love affair with deadly weapons have been Alexander Hamilton, Abraham Lincoln, James Garfield, William McKinley, John F. Kennedy, Robert Kennedy, Martin Luther King, Malcolm X, Ronald Reagan and, of course, John Lennon.

It is profoundly depressing that in the face of mass slaughter, there is a very powerful gun lobby, institutionalized in the National Rifle Association (NRA) and solidly allied to the Republican Party, that resists even the most moderate tightening of the nation’s presently useless gun laws. 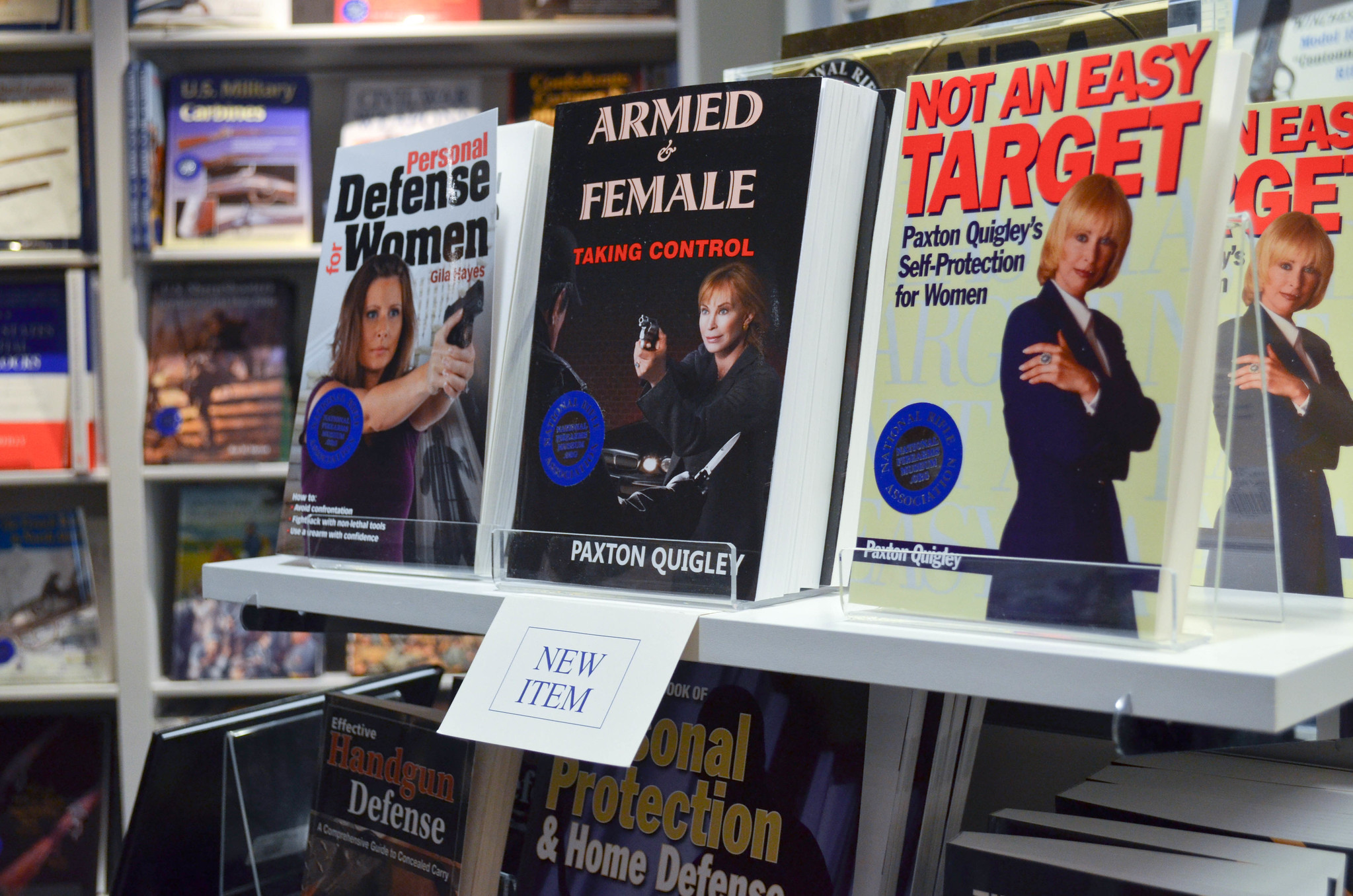 As we will see, there are deeply irrational reasons for this stance — ones tied to a perverted notion of freedom and an anarchistic fear of government — and these evoke strong emotions when challenged. In other words, from the gun advocate’s point of view, this is not an issue open to reasoned debate.

They refuse to make a connection between their advocacy and the 40,000 Americans killed by gunfire yearly. This failure to approach the topic of guns in a sane fashion undermines the logic of the excuses they use to defend their position. Here are those we hear most often.

It is certainly true that while sitting on a shelf, locked in a drawer, or carried in a holster, guns are inert pieces of machinery and, usually, it takes a finger to pull the trigger.  Yet this fact is actually beside the point. It’s not relevant because guns are not manufactured to stay on shelves, in drawers or in holsters. That inert status has nothing to do with why they exist or why most of us choose to possess them.

So, we can go on and ask, why are guns manufactured? Why do they exist? Primitive firearms were invented in China sometime in the 12th century. They were invented to be used in warfare, that is, to kill and injure other people. As the technology spread westward, first into the Arab lands and then to Europe, it was improved, but the weapon’s reason for being, to kill and injure others, stayed the same.

In most cases, guns became a monopoly of the state. However, some exceptions to this trend evolved. Particularly in the U.S., guns diffused into the population as a whole.

In the United States, this process of diffusion was and continues to be tolerated based on the gun lobby’s misinterpretation of the Second Amendment of the U.S. Constitution. That amendment states, “A well regulated militia, being necessary to the security of a free state, the right of the people to keep and bear arms, shall not be infringed.” 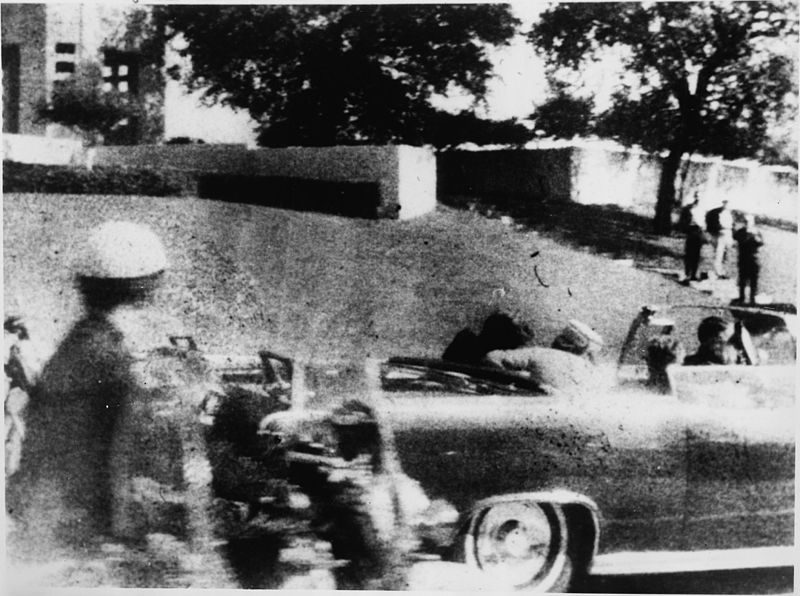 At the time the amendment was passed (1791), those who enlisted in “well regulated militias” usually supplied their own weapons. That is why the right to “keep and bear arms” was included in the amendment. However, the situation was quite different when the 1903 Militia Act turned militias into state-based national guards funded and equipped by the federal government. Thus by the 20th century, there was no longer any connection between a “well regulated militia” and “keeping and bearing arms.”

Here is another way to interpret the Second Amendment. Note that the part of the amendment referencing infringement is an independent clause modified by a phrase referencing the maintenance of “a well regulated militia.” Apart from the National Guard, the modern U.S. does not maintain “regulated” militias — though, unfortunately, there are a lot of unregulated ones out there. And, most of the membership of the NRA, along with the other gun-toting tough guys walking the streets of (particularly) the western and southern U.S. states, don’t even belong to a national guard. 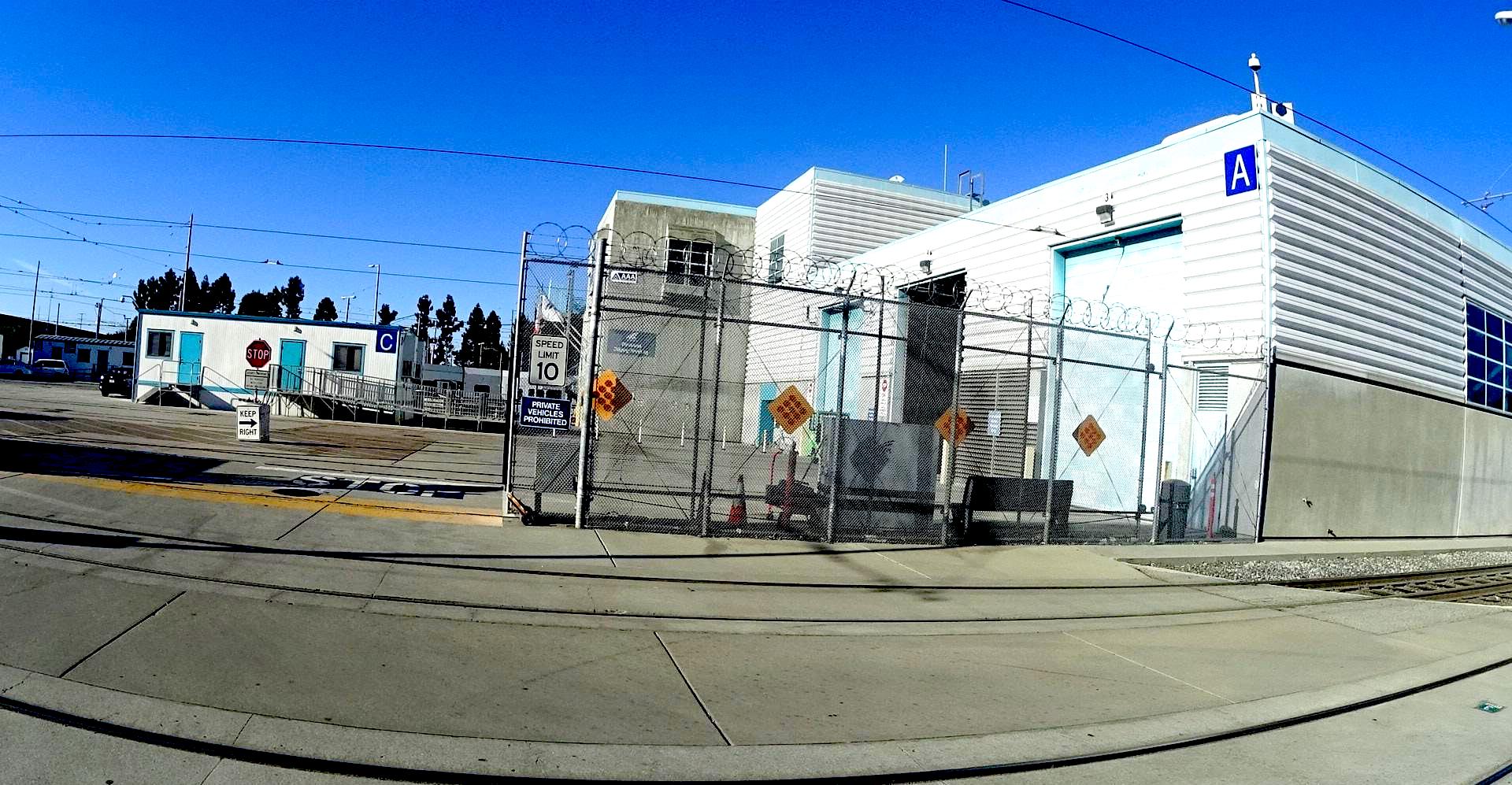 The hard truth is that guns were originally invented, and still today are primarily made, to shoot people. There are other uses: in hunting; to put holes in paper targets which often take the form of outlines of human bodies; to blast clay projectiles out of the air for fun; and to give a person a false sense of security; but these remain secondary to the gun’s original and primary purpose.

So the argument that “guns don’t kill people” is ahistorical and really a red herring. Guns are essentially our partners —intimate accessories if you will — in what is often criminal activity, facilitating the efficiency of acts of homicide, assault and suicide. At the rate we pursue these activities, we just couldn’t maintain the modern level of mayhem without them.
Excuse No. 2: Guns are most often used for self-defense.

If you go on the web, you can find claims that the use of guns for self-defense number in the thousands of episodes per year. However, these surveys are suspect — often carried out by pro-gun organizations, using questionable methodologies.

More reliable studies, some conducted by the FBI, suggest that few criminals are shot by law-abiding citizens; most criminals are shot either by the police or by other criminals; and firearms reported to have been used in self-defense are, most of the time, used against members of a family or erstwhile friends during arguments. 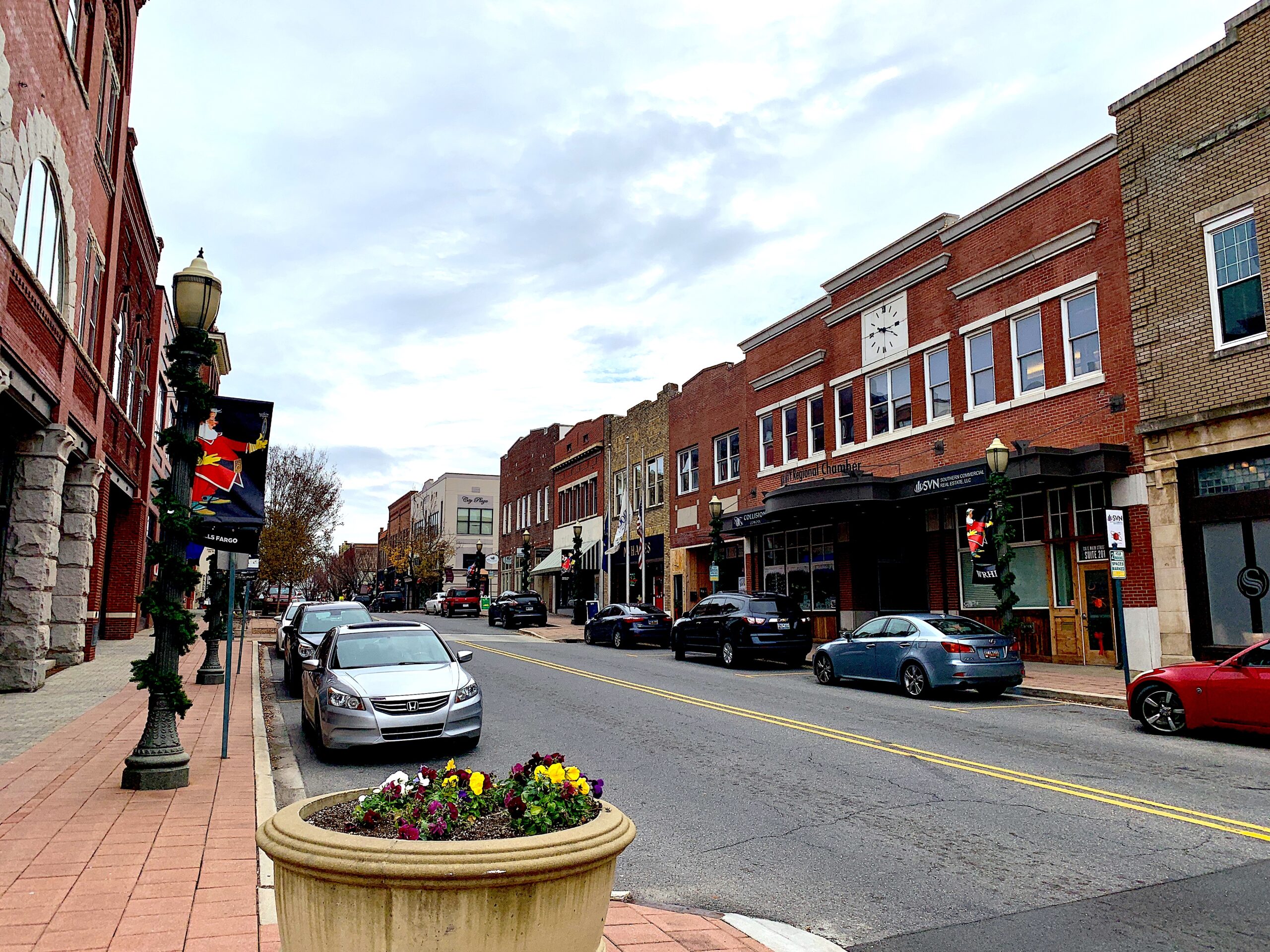 Main Street in Rock Hill, South Carolina. On April 7, six people were shot and killed in a house in the town. (CC BY-SA 4.0, Wikimedia Commons)

Nonetheless, gun advocates refuse to consider this side of the argument. Take for instance the response to the 2012 Colorado movie theater massacre issued by Luke O’Dell, a spokesman for the Rocky Mountain Gun Owners Association. His response reflected the fallacy that the answer to gun violence is more guns: “Potentially, if there had been a law-abiding citizen who had been able to carry [a gun] in the theater [in Colorado], it’s possible that the death toll would have been less.” One might more plausibly argue that if the shooter had not been able to procure a rifle, a shotgun and two handguns “to carry” into the theater, the death toll would have been zero.

The notion that more guns would actually make the U.S. a safer place is counter-intuitive and lacking in evidence.

Excuse No. 3: An armed citizenry is a safeguard against a tyrannical government.

Those who argue this point consider any gun regulation whatsoever as a first step down a slippery slope. So you take away someone’s semi-automatic assault-style weapon today and tomorrow you are confiscating their hunting rifle. This is an assumption often tied to a paranoid distrust of government (read: any sort of officially imposed regulation). It goes along with the claim that the only defense against tyranny is the unregulated “right” to acquire unlimited arms.

There is something pathetically naive about this attitude. Even if you have a private militia armed with military-grade weapons, you are not going to stand up to the tanks, aircraft, missiles, drones and battalions of armed and trained soldiers that would be deployed against a serious rebellion.

Excuse No. 4: If guns are criminalized, only criminals will have guns.

This assertion is, again, based on the belief that it is all or nothing when it comes to gun ownership. Maybe it should be, ideally. But, given American culture and history, that is not how this issue is ultimately going to work out. And, all but the paranoid understand this. Rational gun control is not synonymous with criminalizing all guns. 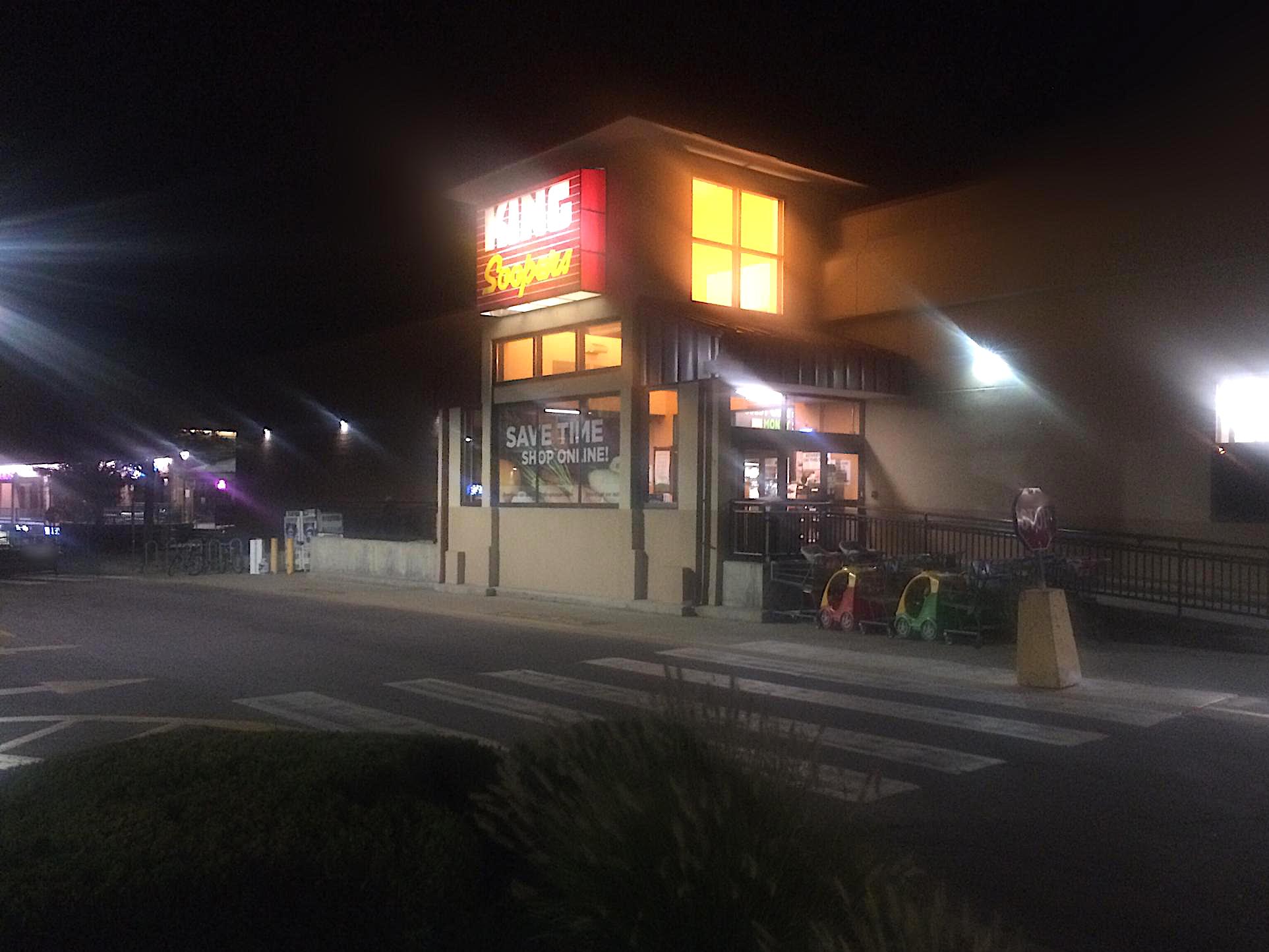 It has often been pointed out that national polls show that most Americans want stricter gun control. For instance, recent polls suggest that between 80 percent and 90 percent of Americans favor stronger background checks for gun purchases. But, politically, this seems not to matter. Why?

Perhaps because most Americans are not sufficiently focused on this single issue to politically compete with the organized minority who are — that minority who errantly believe that owning a gun (almost any gun) is “a birthright and an essential part of the nation’s heritage.” In other words, for these folks, being armed with a gun is a cornerstone of American freedom.

Isn’t this somehow a corruption of the democratic process? Shouldn’t that process demand that in matters of national security — and this certainly is such a matter — the safety of the citizenry should prevail? And, if almost unregulated gun ownership has been, prima facie, demonstrated to be a threat to that safety, should not more stringent gun control follow?

Unfortunately, this is not the American way of democratic politics. In truth the U.S. is not a democracy of individual citizens, but rather one of competing interest groups. The interest group that is the NRA is better funded and more politically influential than its opponents, and so, at least to date, in the matter of gun legislation, it wins.

That is why we can find the following article entitled “Still Little Interest in U.S. Gun Control” in the Philadelphia Inquirer of July 22, 2012. “Despite periodic mass shootings…the political calculus seems locked down. Most Republicans adamantly oppose tighter gun controls, and most Democrats would prefer to focus on other issues.” 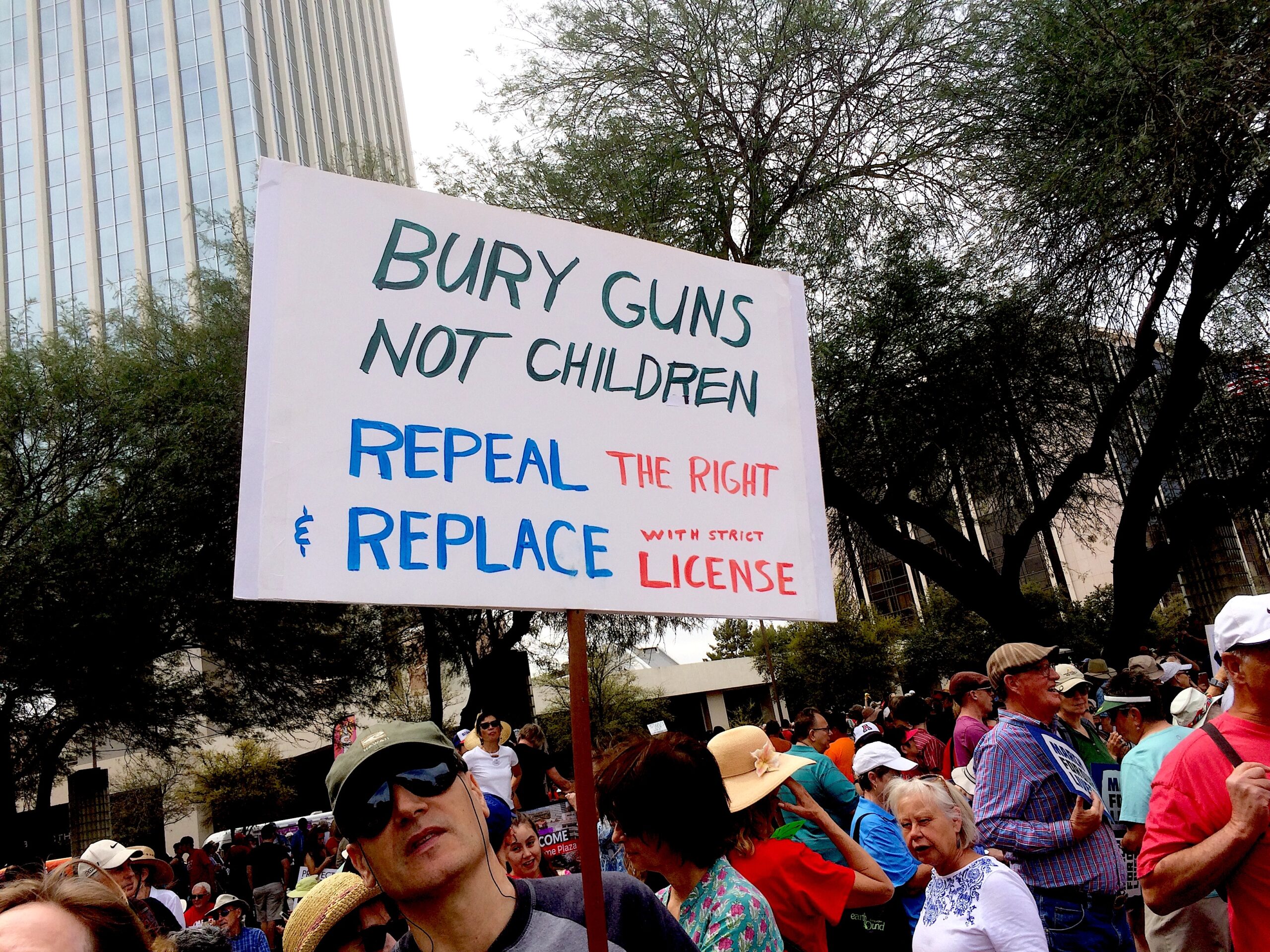 The American political system is in need of multiple reforms. As it now stands, too few people can command too much power in the name of relatively small minority groups. We need campaign finance reform and much more transparency when it comes to the operations of special interests. We need shorter election campaigns and limits on how much it can cost to run for any office. We need honest and open regional and national debates on both domestic and foreign policies that affect large numbers of our citizens — whether those citizens know it or not.

But there are other things needed — things that reflect clear thinking and analytical effort. For instance, we need a rational rethinking of what the word “freedom” means. For the NRA and its allies, the linchpin of freedom is the right to own unlimited semi-automatic assault rifles.

Does “freedom” mean that if you have a lot of money you can use it to corrupt the nation’s politicians so that they distort the positions and policies of government to such a degree that they cease to have any connection to commonsense definitions of collective community interest?

This article is from TothePointAnalysis.com.