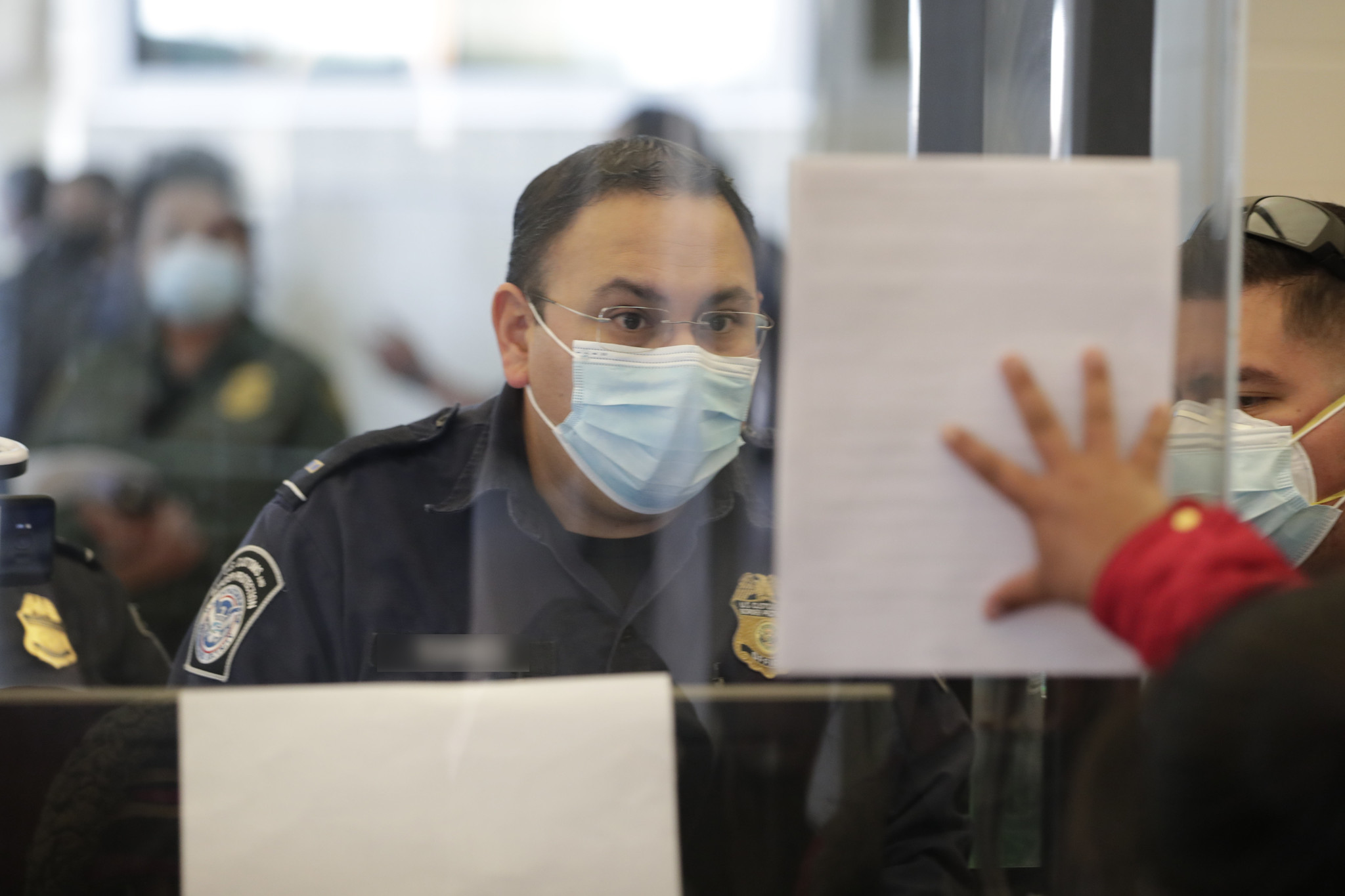 Last week’s news of the Biden-Harris administration’s about-face on U.S. refugee policy was a win for all the progressive forces that have been pressuring Biden to discontinue former President Donald Trump’s egregiously low cap on the number of refugees accepted each year. But the victory did nothing to change the other massive structural ways in which the Biden-Harris administration is continuing to perpetuate the humanitarian crisis at the border through its embrace of Trump’s other asylum policies.

For example, even as the Biden-Harris administration now says it will increase the refugee cap to 62,500 — rather than adopting Trump’s annual cap of 15,000 refugees as it had earlier announced it would do — the Biden-Harris administration is still continuing the Title 42 program that Trump imposed a year before, effectively closing the border to most refugees with no due process, court date or record of an asylum application.

Republicans and Democrats alike are preoccupied with the so-called border crisis. “There is no crisis at the border caused by migrants,” Nicole Phillips, legal director of the Haitian Bridge Alliance, told Truthout. “There is a humanitarian and human rights crisis because the U.S. government has effectively closed the border to asylum seekers and has not allowed them to file for asylum since March of 2020.”

More Haitians were returned to Haiti in the first two months of the Biden-Harris administration than in all of fiscal year 2020, according to a report titled, “The Invisible Wall,” that was released on March 25 by the Haitian Bridge Alliance, the UndocuBlack Network and the Quixote Center. Haitians, who make the long, treacherous journey to the U.S.-Mexico border are fleeing instability, violence and persecution “only to be abused by ICE [Immigration and Customs Enforcement] and CBP [Customs and Border Protection] officers,” the report notes.

The Biden-Harris administration’s continuation of Title 42 to expel asylum seekers is causing family separations, as documented in an April report published by Human Rights First, Haitian Bridge Alliance and Al Otro Lado. The policy propels desperate families to send their children over the border to protect them from kidnapping, sexual assault and other forms of violence. Moreover, CBP is still separating children from aunts, uncles and grandparents with whom they traveled to the border and expelling those relatives to Mexico.

In addition, the administration has continued Trump’s policy of expelling mothers who have just given birth in the U.S. along with their newborn U.S. citizen children to Mexico with no proof of citizenship for their babies.

The “Biden-Harris [administration] is hiding behind Title 42 in order to justify keeping the border closed because they’re afraid of the backlash from Republican and right-wing media,” Phillips said. “Harris should know better,” as she opposed Title 42 when she was a senator. Harris, along with Sens. Bernie Sanders, Elizabeth Warren and Ed Markey, signed a letter calling for an end to Title 42. In March, Biden made Harris his point person on immigration. 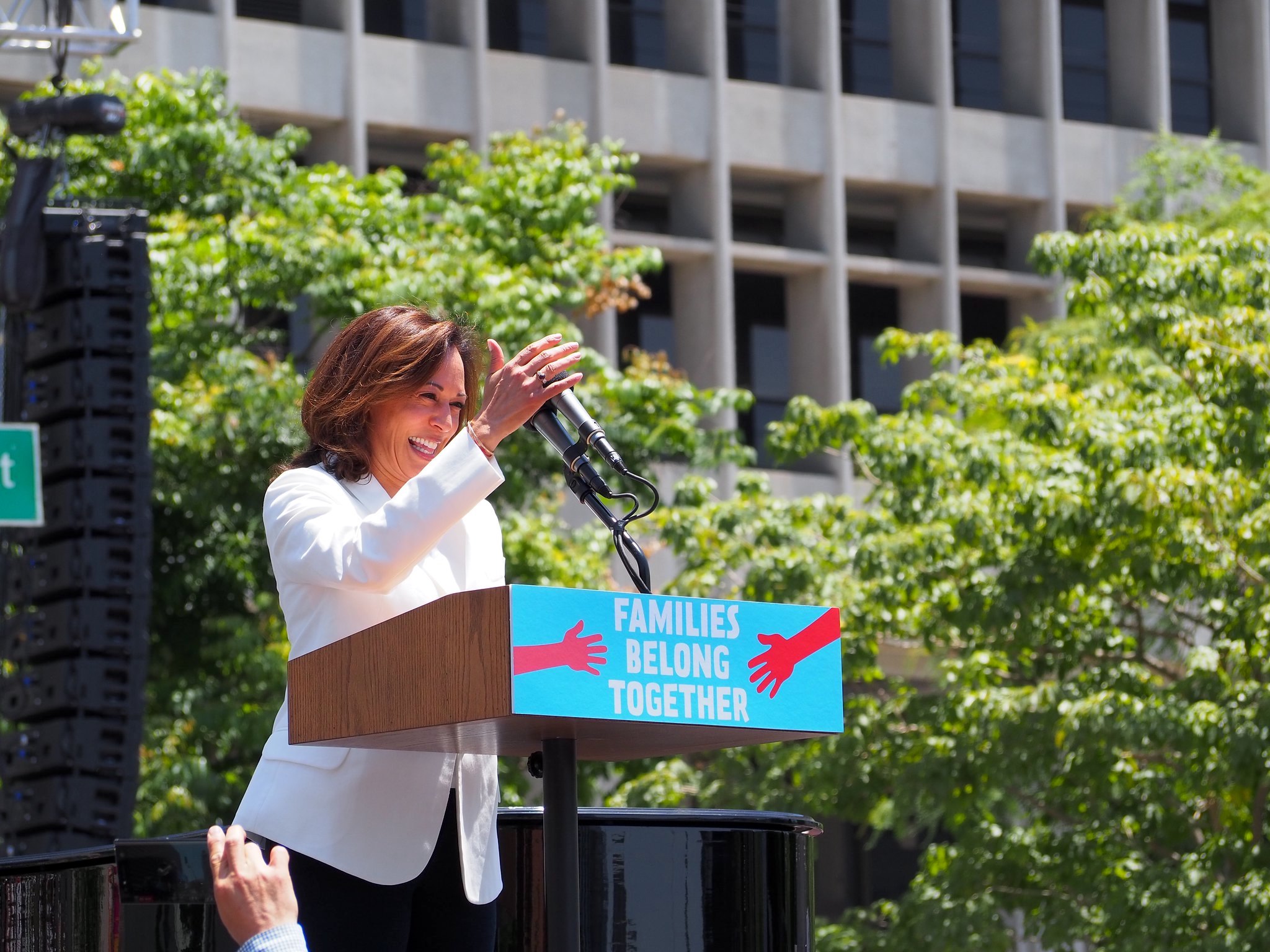 The Title 42 expulsion policy is based on the misapplication of an obscure public health law. The Public Health Service Act of 1944 was designed to grant quarantine authority to health officials which would apply to all persons, including U.S citizens, arriving from a foreign country. It was never intended to be used to distinguish between noncitizens who could or could not be removed or expelled from the U.S., according to Human Rights Watch.

Like Trump, the Biden-Harris administration is disingenuously using the excuse of health hazards from the Covid virus to justify continuing the Title 42 closure, in spite of the consensus by experts that there is no correlation between the entry of migrants and increased risk of Covid infection. It is really a political decision.

Using Title 42 to keep migrants out of the United States was the brainchild of Stephen Miller, Trump’s immigration adviser. Although the CDC opposed the program because it was not supported by a public health rationale, the director succumbed to pressure by Vice President Mike Pence and other administration officials. “It has become clear that the Trump Administration used the coronavirus pandemic as a pretext for its larger racist, xenophobic and anti-immigrant plan to close the U.S.-Mexico border to migrants seeking humanitarian protection,” according to “The Invisible Wall” report. 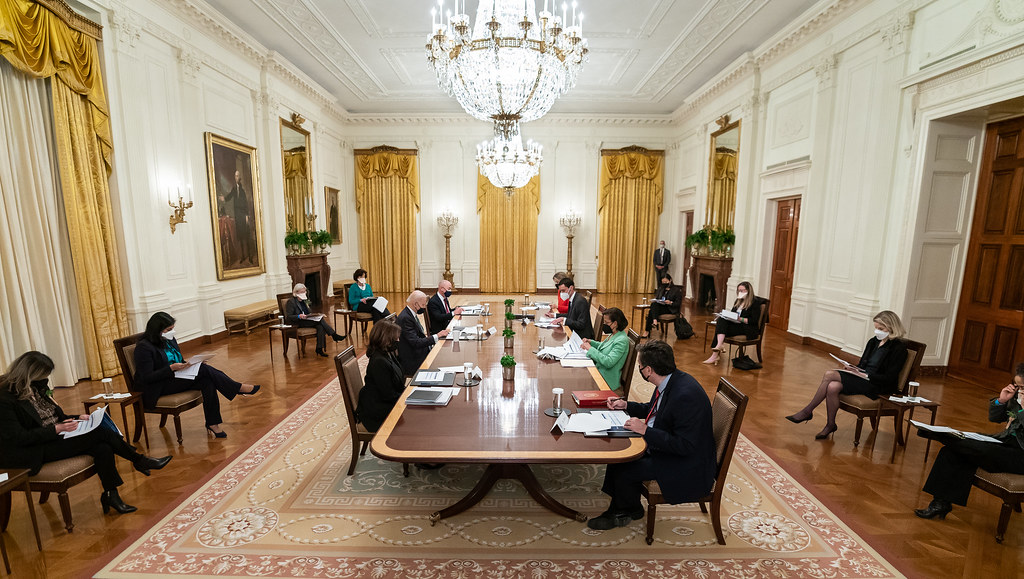 Migrants whom the U.S. government turns back at the border — including mothers with young children — are “sitting ducks” for kidnappers and others when they are returned to Mexico. Human Rights First identified at least 492 reports of violent attacks since Jan. 21, including kidnapping, rape and assault against people who were stranded at the border and/or expelled to Mexico. Eighty-one percent of LGBTQ asylum seekers have reported attacks, including rape, kidnapping, trafficking and other violent assaults.

About 1,500 people are living in a tent encampment in Tijuana near the port of entry at San Ysidro. Many of them have been stranded there for more than a year because they can’t apply for asylum due to the Title 42 expulsion policy.

The people who are not sent to Mexico are kept in ICE or CBP detention and sent back to their home countries with no chance to apply for asylum. CBP officers and Border Patrol agents abuse the migrants in their custody, denying them emergency medical care, stealing their belongings and conducting expulsions at night to dangerous border towns, according to Human Rights First.

In 2016, the Obama administration initiated a policy called “metering,” in which migrants take a number “as if they were at an ice cream store, in order to be able to file an asylum case,” Phillips said. Metering “prevented asylum seekers from meaningfully accessing their right to seek asylum because it forced them to remain in Mexico.” As of February, more than 16,000 asylum seekers remained on metering waitlists. There may be 10,000 to 15,000 Black migrants who are stranded at the southern border, Haitian Bridge Alliance estimates.

Meanwhile, the migrants wait at the border, compelled to stay in Mexico — some for as long as two-to-four years just to be able to file for asylum. CBP used Trump’s March 2020 Title 42 order, which continued the metering program, to turn away almost 13,000 unaccompanied children. Biden has promised to end the metering program.

The Department of Homeland Security (DHS) is now receiving and processing unaccompanied children. On Nov. 18, 2020, a federal judge ruled that expelling them violates the Trafficking Victims Protection Act. Although a federal court stayed that order in January, the Biden-Harris administration amended the CDC’s Title 42 order to exempt unaccompanied children arriving at the border. As a result, they haven’t been expelled since November 2020.

“That shows that DHS has the capacity to process the backlog of asylum seekers at the border who haven’t been able to enter ports of entry because of Title 42 since March of 2020,” Phillips said. 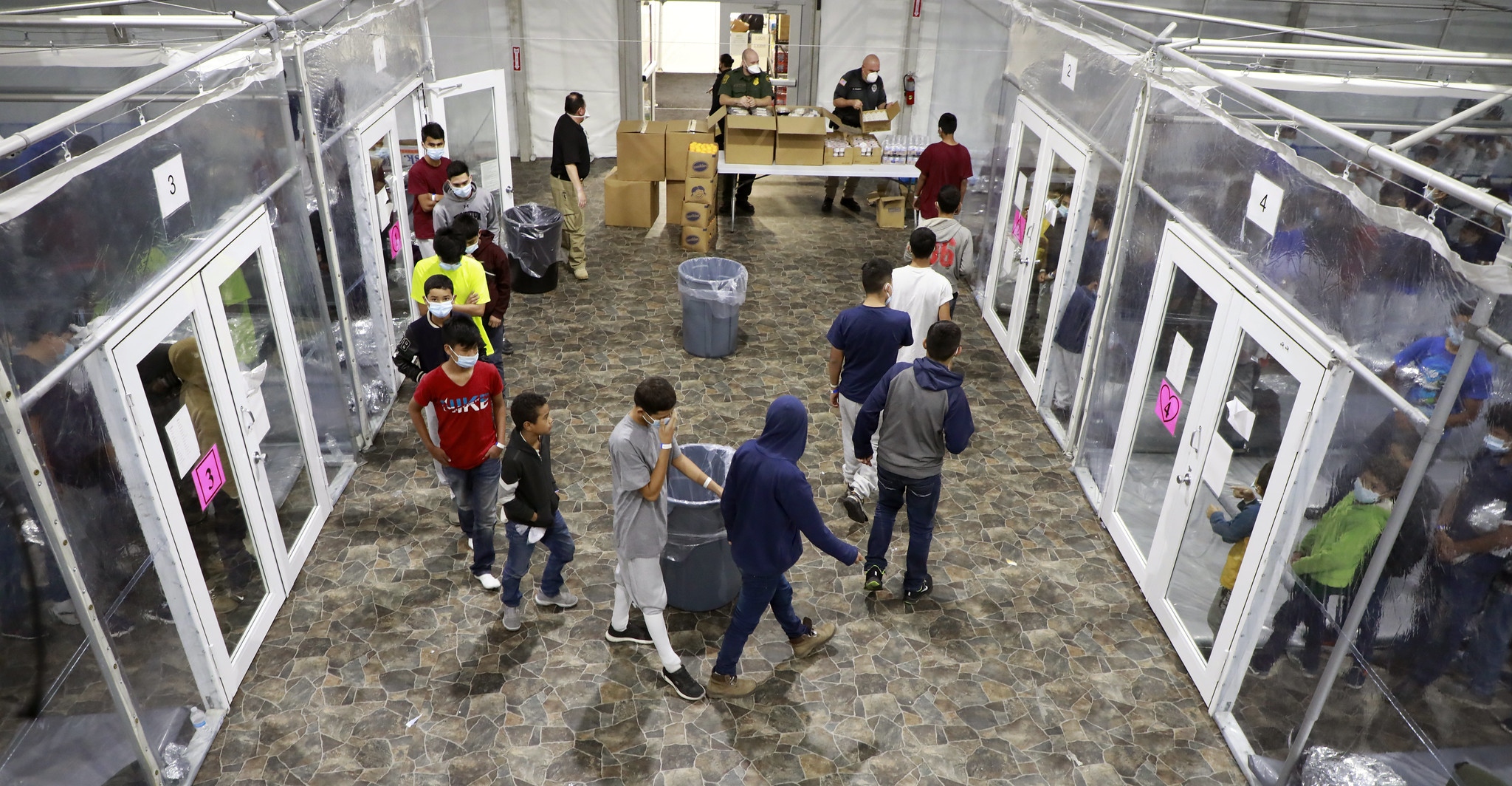 Scene at a temporary facility in Donna, Texas, that processes family units and unaccompanied alien children encountered and in the custody of the U.S. Border Patrol, March 17. (CBP Flickr, Jaime Rodriguez Sr.)

Title 42, which has never been applied in the immigration context, violates the Immigration and Nationality Act as well as the Refugee Convention, which grant noncitizens the right to asylum if they can demonstrate a well-founded fear of persecution due to race, religion, nationality, membership in a particular social group or political opinion, if they are sent back to their home countries.

The Refugee Convention forbids refoulement, sending an individual to a country where it is more likely than not that the individual would face persecution on one of the protected grounds. The Title 42 procedure also violates the Convention Against Torture and Other Cruel, Inhuman or Degrading Treatment or Punishment, which contains a non-refoulement provision. It forbids sending an individual to a country where there is a substantial likelihood he or she would be subjected to torture.

The U.N. Refugee Agency (UNHCR) has confirmed repeatedly during the pandemic that expelling asylum seekers and refugees at the border with no individualized determination of their needs to be protected violates the non-refoulement provisions of international law. The UNHCR Assistant High Commissioner for Protection declared, “The right to seek asylum is a fundamental right. The COVID-19 pandemic provides no exception.”

Using Title 42 to keep migrants out the United States under the guise of protecting health is a cynical and racist policy. “President Biden and the Department of Homeland Security must be reminded that their inaction to protect vulnerable immigrant communities seeking refuge in the U.S. is not only putting lives on the line; it upholds a white nationalist immigration system that seeks to expel and keep Black and brown immigrants out at any cost,” Cynthia Garcia, national campaigns manager for community protection of United We Dream, said in a statement. “Biden could instruct the CDC to lift the [Title 42] policy,” Phillips suggested.

Many Black migrants and asylum seekers from Africa and the Caribbean are disproportionately harmed by the expulsion policy. Sixty-one percent of Haitian asylum seekers who were denied U.S. asylum protections were crime victims while languishing in Mexico. Many are targets of anti-Black violence.

To its credit, the Biden-Harris administration suspended the repressive Trump administration policy called the Migrant Protection Protocols (MPP), also known as the “Remain in Mexico” program. Those migrants could file for asylum in the United States but then had to leave the U.S., return for court hearings and then leave again. It left approximately 25,000 asylum seekers in Mexico living in dangerous conditions as their cases progressed through the U.S. legal system. Six thousand of them are now being processed and they no longer have to stay in Mexico.

“This is a big victory for them and their families,” Phillips said. But it only applies to migrants from South and Central America and the Caribbean. This doesn’t help the thousands of Haitians languishing at the border, who don’t come under the MPP. “The border isn’t open to Haitians and Africans,” Phillips added.

The administration’s quick reversal on refugee caps demonstrates the power of political pressure in holding their feet to the fire. The importance of continued opposition to their inhumane asylum policies and demands for humane ones cannot be overestimated.