No matter how much time Chauvin gets, he’s going to spend all of it in solitary confinement.

When former Minneapolis police officer Derek Chauvin was convicted of murdering George Floyd on April 20, his bail was revoked, he was handcuffed, he was taken into custody and sent to a prison in Stillwater, Minnesota. A police spokesman told the media Chauvin was being held in solitary confinement for his own safety. Most of us won’t give him much more thought until his name pops up in the news again for his sentencing in June.

There’s actually a lot to talk about, though. First, is how long will Chauvin’s sentence be and how it will be calculated? Second, is in what conditions will he be held over the long term? Both issues are more complicated than they might seem.

Chauvin was convicted of second-degree unintentional murder, third-degree murder, and second-degree manslaughter. He faces as many as 45 years in prison, although state sentencing guidelines call for 12 ½ years because the murder of Floyd is Chauvin’s “first offense.” There’s a big difference between 12 ½ and 45 years. So how will such a decision be made?

All states, like the federal government, have complicated charts that show categories of “criminal history” and levels of the severity of crimes. Take a look at the federal chart here. 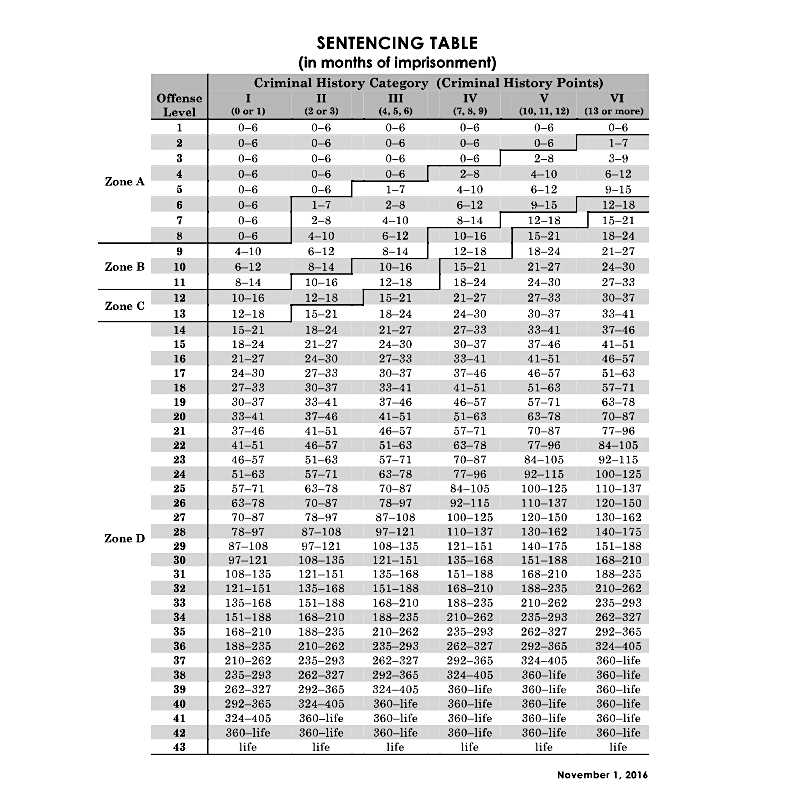 Chauvin’s three convictions are a result of a single crime, the murder of George Floyd. So his sentences will almost certainly be served concurrently. That is, he will serve sentences for all three crimes at the same time, rather than having to serve one after the other. The most serious crime, second-degree murder, is a criminal level of 32 on the sentencing chart. That calls for 121-151 months in prison. But that’s just a baseline. Myriad factors could change it to make it either longer or shorter.

On the other hand, the defense will offer evidence of “mitigation,” which would shorten the sentence. They could argue that perhaps Chauvin was abused as a child. Perhaps he has a drinking problem. They could argue that the drugs that Floyd had in his system contributed to his death. Mitigation is unlikely in such a high-profile case.

Thousands march on March 7, the day before the start of jury selection in the Derek Chauvin murder trial in Minneapolis. (Chad Davis/Wikimedia Commons)

At the end of the day, the final decision on sentencing belongs to the judge. If I could make an educated guess, I would say that the minimum of 12 ½ years is not going to happen. There are legitimate enhancements. Chauvin is probably looking at something closer to 15-20 years.

No matter how much time Chauvin gets, he’s going to spend all of it in solitary confinement. In almost any other circumstance, when a law enforcement officer is convicted of a crime and sentenced to prison, he is assigned to solitary for his own safety. In a prison’s general population, any number of people could be expected to do a former cop harm. Not only is Chauvin a former cop, though. He’s an internationally infamous murderer. He wouldn’t last five minutes in gen pop.

Derek Chauvin will not get any special treatment in prison because he’s a former cop. On the contrary, his will be hard time. He’ll spend the coming decades either truly alone or looking over his shoulder to see if anybody is coming to kill him. Those of us who wished to see him punished for his crime have gotten what we wanted.

3 comments for “JOHN KIRIAKOU: The Formula for Sentencing Derek Chauvin”