Now is the time for these congresspeople to turn their talk into action, write Medea Benjamin and Marcy Winograd. 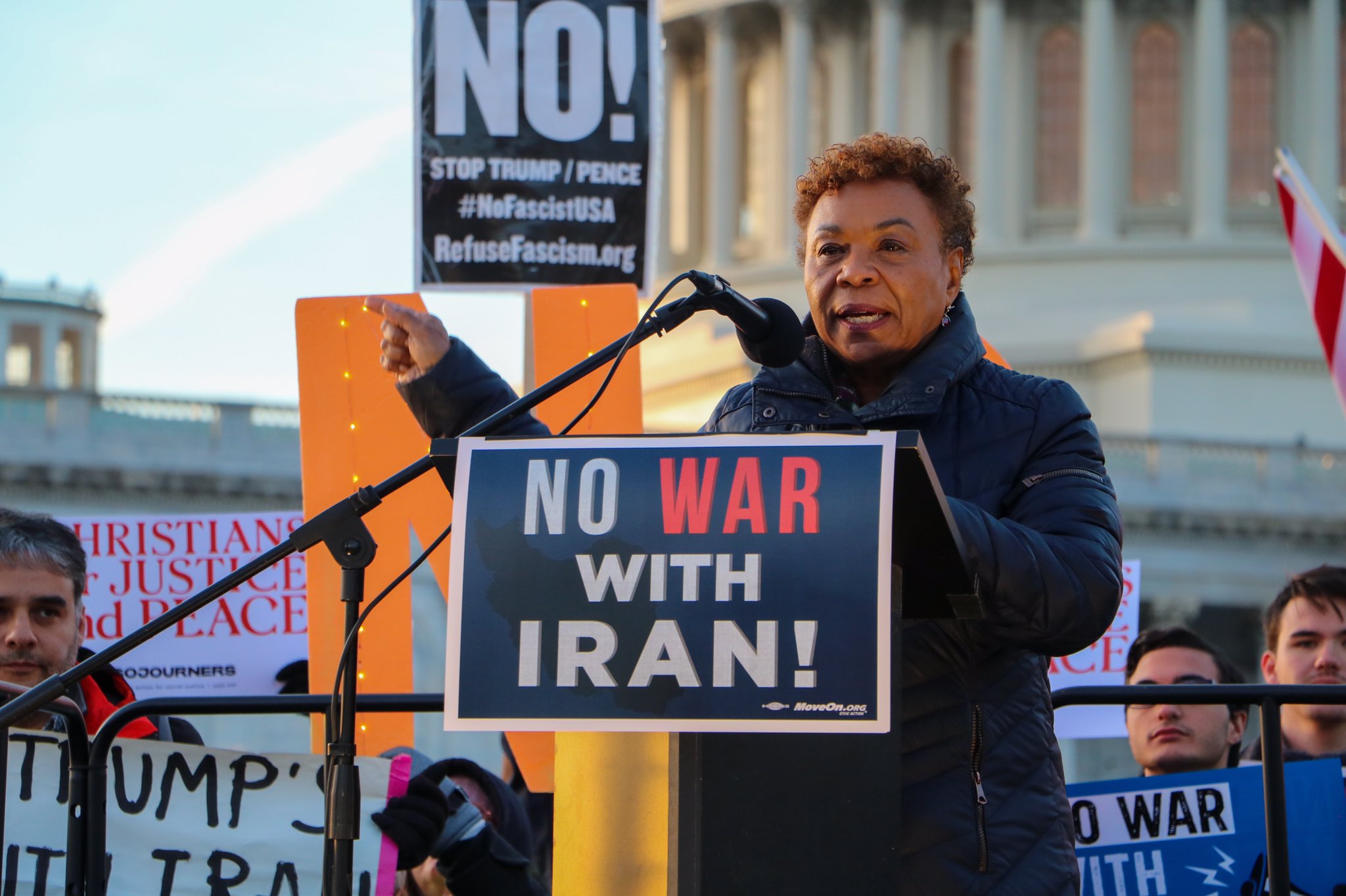 By Medea Benjamin and Marcy Winograd

A month before the vote on the federal budget, progressives in Congress declared, “We’ve studied President Biden’s proposed $753 billion military budget, an increase of $13 billion from Trump’s already inflated budget, and we can’t, in good conscience, support this.”

Now that would be a show stopper, particularly if they added, “So we have decided to stand united, arm in arm, as a block of NO votes on any federal budget resolution that fails to reduce military spending by 10-30 percent. We stand united against a federal budget resolution that includes upwards of $30 billion for new nuclear weapons slated to ultimately cost nearly $2 trillion. We stand united in demanding the $50 billion earmarked to maintain all 800 overseas bases, including the new one under construction in Henoko, Okinawa, be reduced by a third because it’s time we scaled back on plans for global domination.”

“Ditto,” they say, “for the billions the president wants for the arms-escalating U.S. Space Force, one of Trump’s worst ideas, right up there with hydroxychloroquine to cure Covid-19, and, no, we don’t want to escalate our troop deployments for a military confrontation with China in the South China Sea. It’s time to ‘right-size’ the military budget and demilitarize our foreign policy.”

Progressives uniting as a bloc to resist out-of-control military spending would be a no-nonsense exercise of raw power reminiscent of how the right-wing Freedom Caucus challenged the traditional Republicans in the House in 2015. Without progressives on board, Biden may not be able to secure enough votes to pass a federal budget that would then green light the reconciliation process needed for his broad domestic agenda.

For years, progressives in Congress have complained about the bloated military budget. In 2020, 93 members in the House and 23 in the Senate voted to cut the Pentagon budget by 10 percent and invest those funds instead in critical human needs. A House Spending Reduction Caucus, co-chaired by Reps. Barbara Lee and Mark Pocan, emerged with 22 members on board.

Meet the members of the House Defense Spending Reduction Caucus: 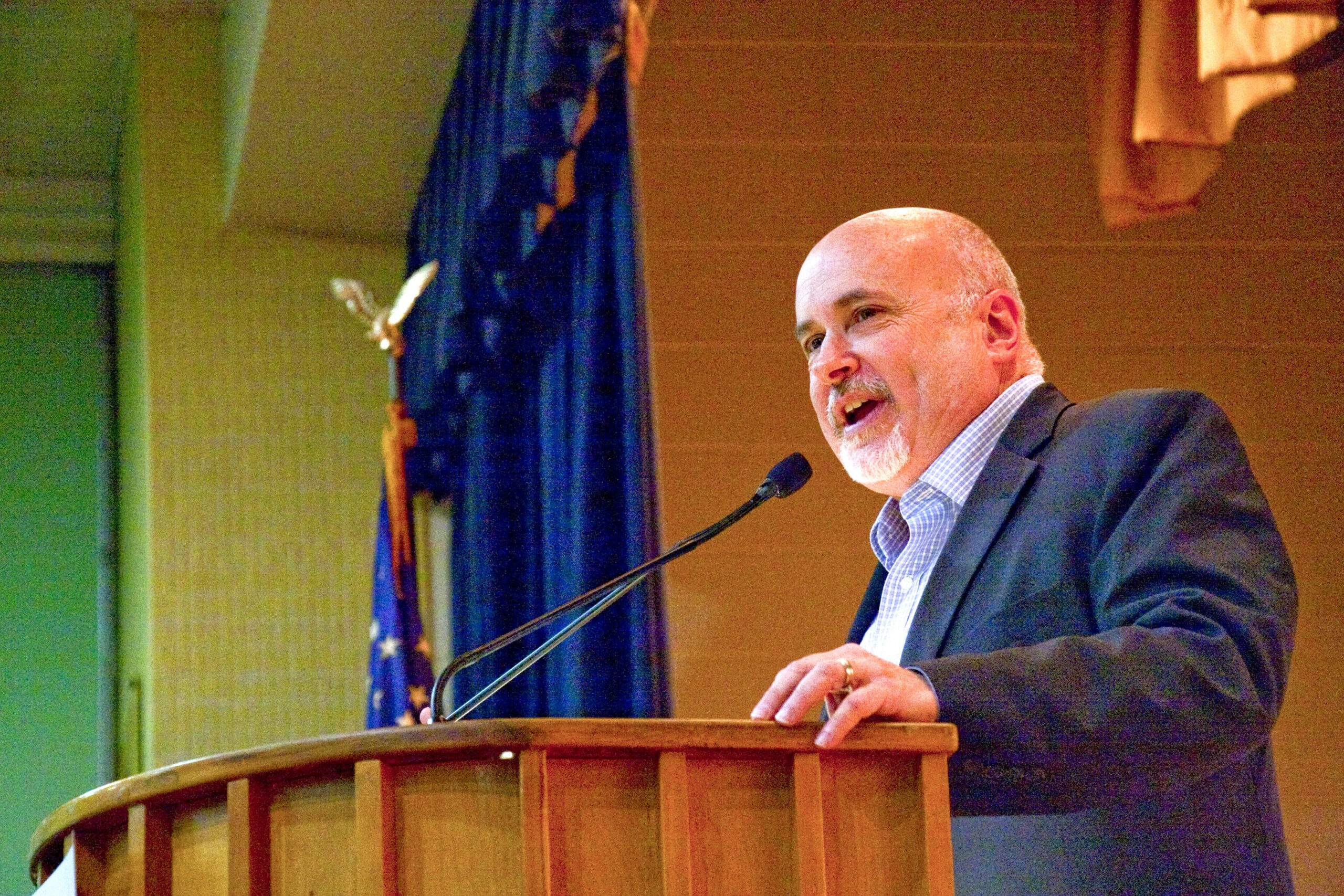 We also have the Progressive Caucus, the largest Caucus in Congress with almost 100 members in the House and Senate. Caucus Chair Pramila Jayapal is all for cutting military spending.

“We’re in the midst of a crisis that has left millions of families unable to afford food, rent, and bills. But at the same time, we’re dumping billions of dollars into a bloated Pentagon budget,” she said. “Don’t increase defense spending. Cut it — and invest that money into our communities.” 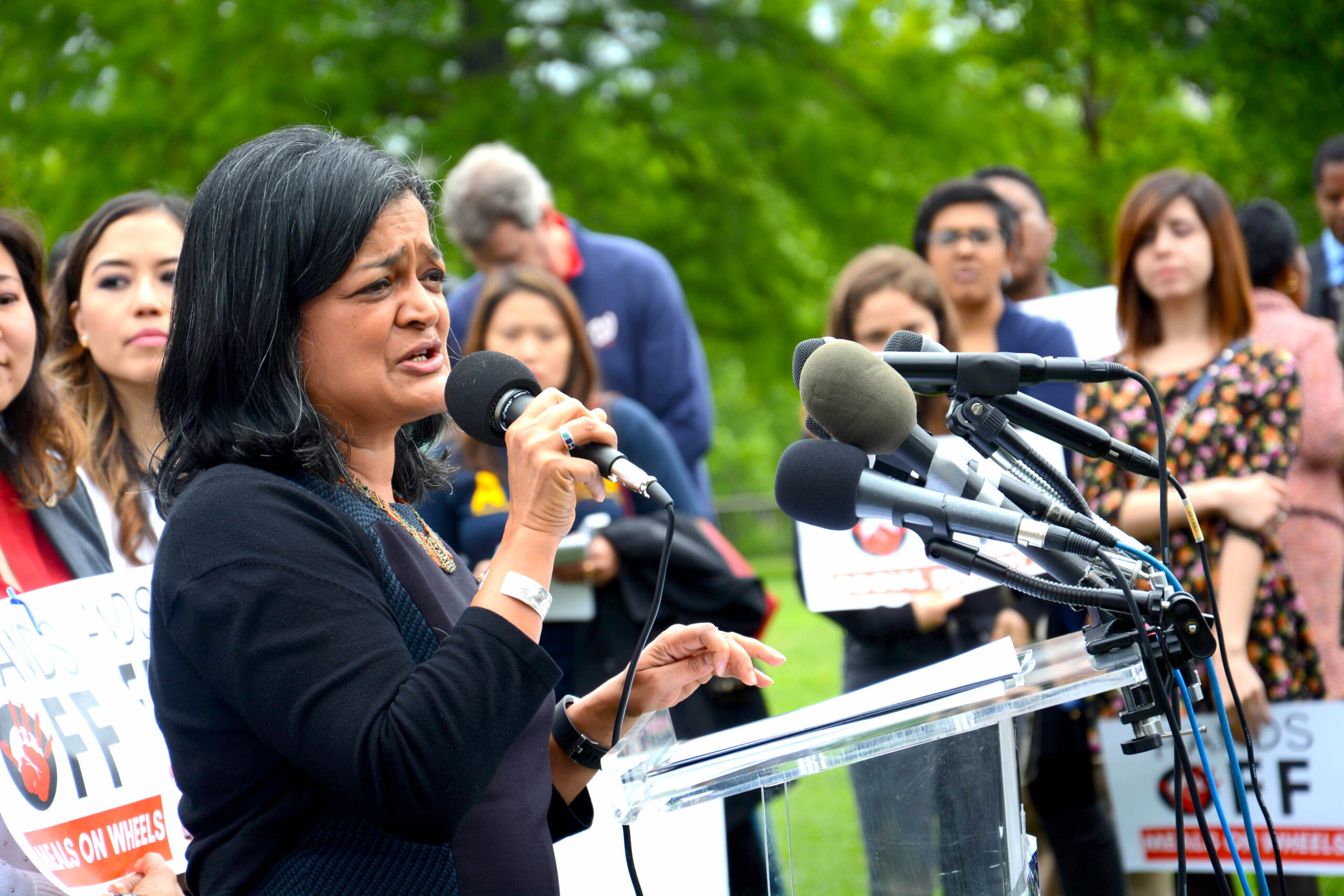 Now is the time for these congresspeople to turn their talk into action.

Consider the context. Biden urgently wants to move forward on his American Families Plan rolled out in his recent State of the Union address. The plan would tax the rich to invest $1.8 trillion over the next 10 years in universal preschool, two years of tuition-free community college, expanded healthcare coverage and paid family medical leave.

Biden, in the spirit of FDR, also wants to put America back to work in a $2-trillion infrastructure program that will begin to fix our decades-old broken bridges, crumbling sewer systems and rusting water pipes. This could be his legacy, a light Green New Deal to transition workers out of the dying fossil fuel industry.

But Biden won’t get his infrastructure program and American Families Plan with higher taxes on the rich — almost 40 percent on income for corporations and those earning $400,000 or more a year — without Congress first passing a budget resolution that includes a top line for military and non-military spending. Both the budget resolution and reconciliation bill that would follow are filibuster proof and only require a simple majority in the House and Senate to pass. 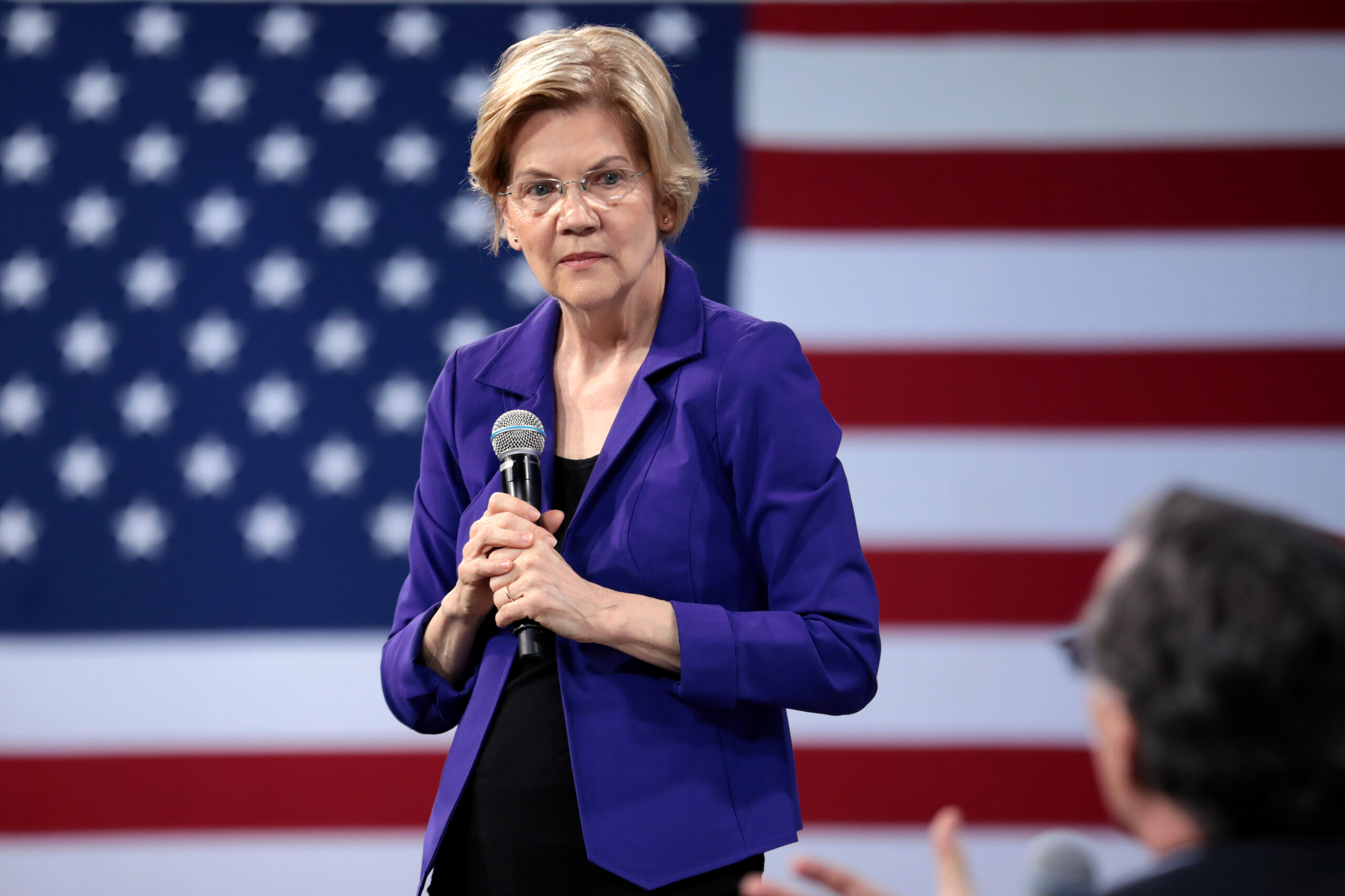 To flex their muscles, Republicans may refuse to vote for a budget resolution crafted by the Democratic Party that would open the door to big spending on public goods, such as pre-kindergarten and expanded health care coverage. That means Biden would need every Democrat in the House and Senate on board to approve his budget resolution for military and non-military spending.

So how’s it looking?

In the Senate, Democrat Joe Manchin from West Virginia, a state that went for Trump over Biden more than 2-to-1, wants to scale back Biden’s infrastructure proposal, but hasn’t sworn to vote down a budget resolution. As for Sen. Bernie Sanders, the much-loved progressive, ordinarily he might balk at a record-high military budget, but if the budget resolution ushers in a reconciliation bill that lowers the age of Medicare eligibility to 60 or 55, the chair of the Senate Budget Committee may hold his fire.

That leaves anti-war activists wondering if Sen. Elizabeth Warren, a critic of the Pentagon budget and “nuclear modernization,” would consider stepping up as the lone holdout in the Senate, refusing to vote for a budget that includes billions for new nuclear weapons.

Perhaps with a push from outraged constituents in Massachusetts, Warren could be convinced to take this bold stand. Another potential hold out could be California Sen. Dianne Feinstein, who co-chairs the Senate Appropriations Subcommittee on Energy and Water Development, the committee that oversees the

Over in the House, Biden needs at least 218 of the 222 Democrats to vote for the budget resolution expected to hit the floor in June or July, but what if he couldn’t get to 218? What if at least five members of the House voted no — or even just threatened to vote no — because the top line for military spending was too high and the budget included new “money pit” nuclear land-based missiles to replace 450 Minute Man missiles.

The polls show most Democrats oppose “nuclear modernization” — a euphemism for a plan that is anything but modern given that 50 countries have signed on to the Treaty on the Prohibition of Nuclear Weaponsmaking nuclear weapons illegal and the Nuclear Non-Proliferation Treaty (NPT) requires the U.S. to pursue nuclear disarmament to avoid a catastrophic accident or intentional atomic holocaust.

Now is the time for progressive congressional luminaries such as the Squad’s AOC, Ilhan Omar, Rashida Tlaib, and Ayanna Presley to unite with Congressional Progressive Caucus Chair Pramila Jayapal, as well as Barbara Lee, Mark Pocan and others in the House Spending Reduction Caucus to put their feet down and stand as a block against a bloated military budget.

Will they have the courage to unite behind such a cause? Would they be willing to play hardball and gum up the works on the way to Biden’s progressive domestic agenda?