It goes back to Obama’s decision to re-enter Iraq in 2014, writes Caitlin Johnstone. And Westerners were fed a lie about what  happened there. 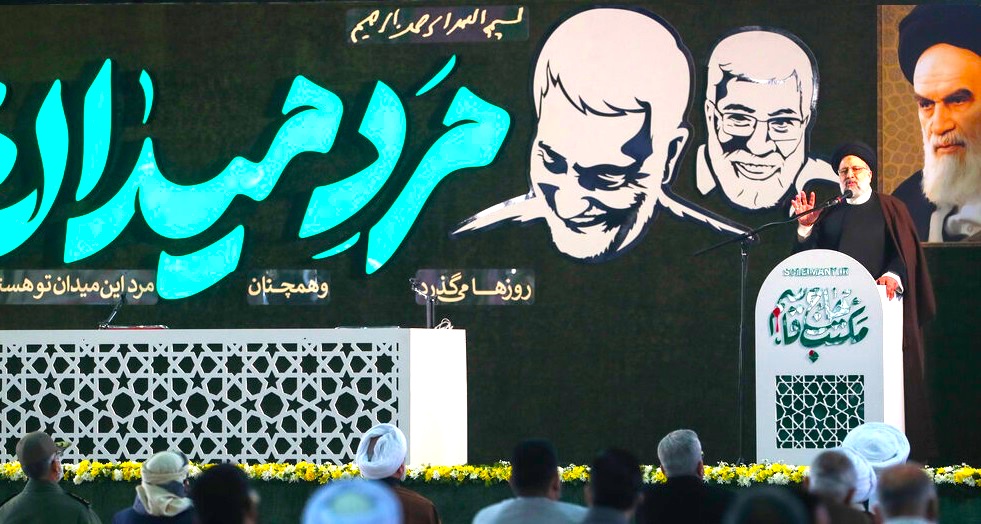 Former National Security Advisor and literal psychopath John Bolton has a new opinion piece out in Foreign Policy titled “‘Bring the Troops Home’ Is a Dream, Not a Strategy,” which should surprise no one and enrage everyone at the same time. The fact that this reptile continues to be elevated on mainstream platforms after consistently revealing himself to be a bloodthirsty liar is all the evidence you need that we are trapped inside a globe-spanning empire fueled by human corpses.

John Bolton has pushed for deranged acts of mass military slaughter at every opportunity. He not only remains one of the only people in the world to continually insist that the Iraq invasion was a great idea, but has actually argued that the destabilization and chaos caused by the invasion cannot be attributed to President George W. Bush’s war because you can’t prove that “everything that followed from the fall of Saddam Hussein followed inevitably, solely, and unalterably from the decision to overthrow him.”

There are harrowing accounts of Bolton threatening, assaulting and intimidating anyone with less power than him if they got in his way; he once threatened to harm the children of former OPCW Director General Jose Bustani because Bustani was interfering in attempts to manufacture consent for the Iraq war.

In an even remotely sane civilization, such a creature would be driven from every town he entered until he is forced to crawl into a cave for the rest of his miserable life eating bats alone in the darkness. Instead he is given the mainstream spotlight whenever he wishes while truthful and intelligent anti-imperialists are relegated to fringe blogs and podcasts. This would not be the case if we did not live in an empire that is held together by war and war propaganda.

And now look at me, off on a tangent before my article has even begun.

The American people are tired of foreign military engagements. Academics agree, Democrats almost unanimously agree, and even some Republicans agree.

But they are all wrong, writes former U.S. national security advisor John Bolton.https://t.co/hRVZlZfXu4

Anyway, in his Foreign Policy article Bolton argues that withdrawing U.S. troops from Afghanistan would be a mistake, because it would lead to the nation being overrun by ISIS and al Qaeda.

“If the Taliban return to power in all or most of the country, the almost universal view in Washington today is the near certainty that al Qaeda, the Islamic State, and others will resume using Afghanistan as a base of operations,” Bolton writes.

The US Empire Consensus

These are very strange words to have to type, but, John Bolton is right. There is a consensus within the hub of the U.S. empire that that is what will happen. You can tell because that’s what the empire’s media have been blaring all year.

In a March article from Vox titled “The best case against withdrawing all US troops from Afghanistan,” a senior fellow from the military industrial complex-funded think tank Center for a New American Security named Lisa Curtis explains that withdrawing troops can lead to a disastrous terrorist insurgency that will only result in having to send them back again.

“Let’s look at Iraq,” says Curtis. “When the US withdrew troops, ISIS rose and took over Mosul in 2014. We had to put troops back into Iraq and in even greater numbers, and we had to redouble our efforts to stem the rise of ISIS.”

A Bloomberg article from this month titled “Biden’s Afghan Pullout Is Risky Politics and Geopolitics” conveys the same message:

“And once the U.S. is out of Afghanistan, on grounds that it needs to focus on other priorities, it will inevitably become harder to summon the top-level attention and political will needed to stay on top of emerging threats. This is what happened in Iraq in 2013-2014: Midlevel officials were warning, publicly, that ISIS was on the march, but only after a third of the country had fallen did the issue reach the top of the Barack Obama administration’s agenda.”

“Biden himself is well aware of the risks. It was he, in 2011, who took charge of America’s final pullout from Iraq. Within two years US forces were sucked back into the region by the rapid spread of Isis across Iraq and Syria. Then, as now, the temptation to proclaim an end to America’s ‘forever wars’ trumped the benefits of retaining a US footprint to insure against new deterioration.”

We hear this same narrative over and over and over again whenever there’s talk about withdrawing U.S. troops from a region, whether it be Afghanistan, Iraq or Syria: this is going to be President Barack Obama’s disastrous Iraq withdrawal all over again.

Obama withdrew the troops in the early part of his term, but by 2014 Iraq had become so overrun by Islamic State that they needed to return to fight them off.

As soon as it became feasible we had malignant warmongers like former U.S. Vice President Dick Cheney penning op-eds about how bad and wrong the troop withdrawal was, effectively screaming “SEE??? It’s ALWAYS wrong to end wars!” to ensure that a reduced global military presence never becomes the new normal for the U.S. empire. From that day onwards Obama’s Iraq withdrawal has been used to hammer home this narrative that withdrawing troops from anywhere is “risky” and irresponsible. There was a manic, almost orgasmic delight among warmongers at the fact that at last, at long long last, they finally had some evidence that scaling back military expansionism is bad.

In any case the warmongers aren’t actually worried they’ll lose control of Afghanistan, they’re just worried about people becoming too peace-happy; they threw all these melodramatic fits when Trump sought withdrawals that never happened as well.

Secondly, it’s bullshit because the warmongers are lying about why the U.S. re-entered Iraq in 2014.

This is absolutely a big part of the equation in Baghdad.

As one senior Iraqi official put it to me last night: "Remember [Soleimani] was the first to come help us fight ISIS. Without him, Baghdad and Erbil might have fallen." https://t.co/srjgklk44e

This is not a secret. In 2014 the commander of Iran’s Quds Force was already helping to beat back Islamic State in Iraq, and Iraqi officials reminded the world after his assassination last year at the hands of the Trump administration that Soleimani had played a key role in early victories in that fight. Iraq’s Sunni leaders had already been openly saying that they would turn to Iran for help if the U.S. didn’t take the lead in defeating ISIS, and Iran was already demonstrating a willingness to put Soleimani’s notoriously effective fighting forces to work on that endeavor.

If the United States had been a normal country, and not the hub of a globe-spanning empire bent on indefinite global domination, the obvious choice in that moment would have been to let the people in that part of the world sort out their own affairs in whatever way seems best to them. Because the United States is the hub of an empire that cannot tolerate the idea of another power being dominant in an oil-rich region it seeks to control for geostrategic reasons, allowing Iran and Iraq to become allied that closely was unthinkable.

So, as usual, the narrative that Westerners were fed about U.S. troops being in the Middle East to “fight terrorists” was a lie. It was about geostrategic control of the world and its resources, just like it always is.

The so-called war on terror has never been about defeating violent extremist factions, it’s been about keeping the nations in the region from relying on Iran and its allies to defeat them, and about justifying endless military expansionism in a key geostrategic part of the world. It’s been about ensuring the U.S. power alliance is the dominant military force in the Middle East, not Iran and other unabsorbed powers like Russia and China.

General Qassem Soleimani was the best argument against the “war on terror” and was the leader best suited for bringing the region out of danger from violent extremist factions like ISIS and al Qaeda.

That’s why he is dead now.

The world does not need the U.S. empire to police it. People can sort out their own problems around the world if they were only allowed to. Iraq and its neighbors can sort out their own problems, as can Afghanistan and its neighbors. The only violence at risk of coming toward America and its easily-defended borders is the direct result of the US empire’s relentless aggression and belligerence that has killed millions and displaced tens of millions just since the turn of this century. There is no reason we can’t all just let each other be, collaborating and trading in peace without all these invasions, occupations and toppling of sovereign governments.

The empire’s need to control the world’s affairs is like a macrocosm of the human ego, which also exists out of a fear that something bad will happen if I can’t remain in control of it all. But the world is forever out of control, and attempts to reign it in can only lead to disorder and suffering. Our species will not survive if we cannot collectively learn to relinquish the impulse to control, both within and without, and let life dance to its own beat on this beautiful blue world.

14 comments for “The Bogus Argument for Keeping US in Afghanistan”