As`ad AbuKhalil boils down what’s left of the U.S. president’s campaign promise to hold the Saudi crown prince accountable for the assassination of Jamal Khashoggi. 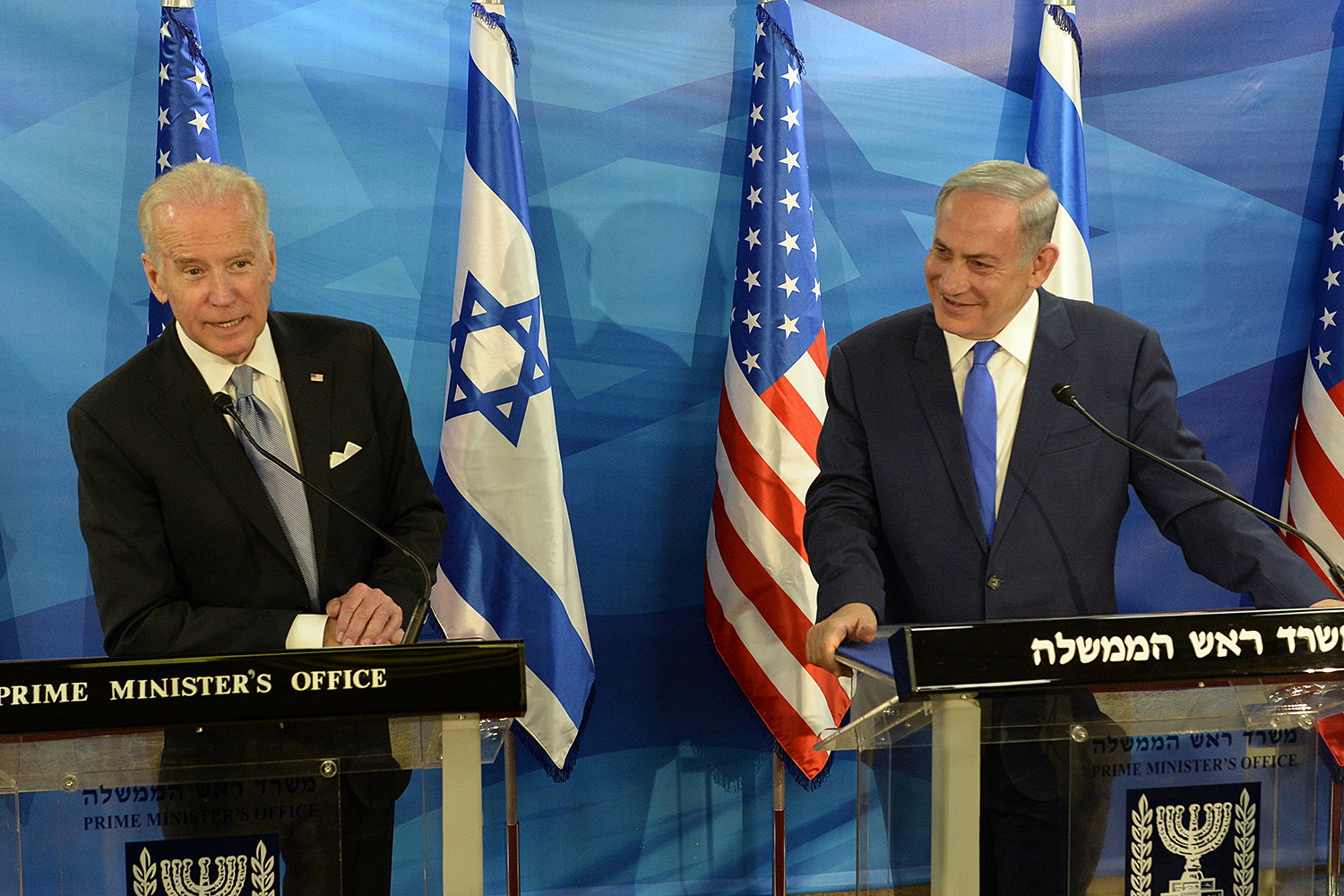 Joe Biden, at left, with Israeli Prime Minister Benjamin Netanyahu in March 2016 during a visit by the U.S. vice president to Israel. (CC BY 2.0, Wikimedia Commons)

After much anticipation, the U.S. government released a declassified, four-page report on the CIA’s conclusions about the assassination of Jamal Khashoggi.

The report squarely blames Crown Prince Muhammad Bin Salman (MbS), the actual ruler of Saudi Arabia, for the crime. The report clearly links the assassination of Khashoggi with other targeting of Saudi dissidents by MbS, but it gives no details at all —perhaps to provide extra political protection for the crown prince.

MbS’ responsibility for the murder (and for all crimes in Saudi Arabia during the reign of King Salman) has never been in doubt. But it is healthy to always exercise some skepticisms toward any U.S. intelligence reports which are released to the media for political reasons.

The report was hailed by the Biden administration and its supporters as evidence of its determination to link its foreign policy to human rights.

But this is not the first time a U.S. president has linked his foreign policy to human rights. Jimmy Carter hailed his own human-rights advocacy in office, while known for championing Anwar Sadat, Saudi Crown Prince Fahd, Pakistan’s Muhammad Zia-ul-Haq and the Shah of Iran, among many other dictators armed and supported by the U.S. government during the Cold War (and after).

Carter still lists Sadat as his best friend and source of inspiration, while Sadat was one of the worst dictators in Egyptian history (until the arrival of another pro-U.S. dictator, Gen. Abdel-Fattah Al-Sisi, in Cairo in 2014).

The U.S., refreshingly, only dropped its human rights pretense under President Donald Trump.  Trump was more honest than other presidents in conceding that U.S. foreign policies are determined by economic and political factors, and have little to do with human rights and democracy.

Even the right-wing Elliott Abrams, in his book Realism and Democracy, admitted that human rights did not play a role in shaping U.S. foreign policy — even under George W. Bush who made “freedom” his catch word.

Biden was a traditional realist in foreign policy as a senator.  He supported all the pro-U.S. despots around the world and was known for championing Israeli occupation and aggression.  He once described Egyptian dictator Hosni Mubarak as “family” and supported all U.S. Middle East wars.

But in Obama’s White House, Biden was in fact less hawkish and less pro-war than Obama and his aides (see the biography of Biden by Evan Osnos, Joe Biden: The Life, the Run, and What Matters Now). 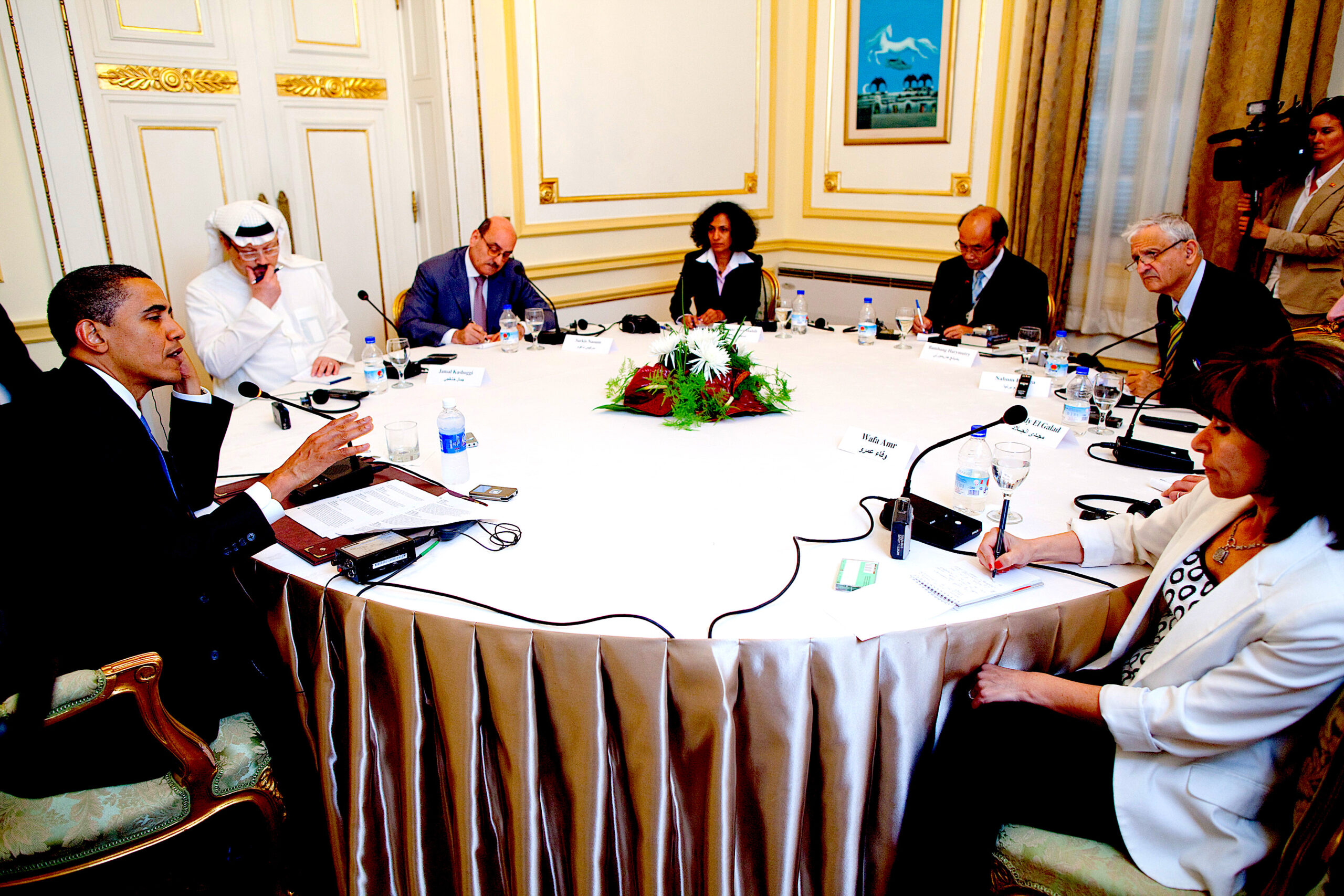 U.S. President Barack Obama at far left, with Jamal Khashoggi to his left, during a June 4, 2009, roundtable. (The White House, Wikimedia Commons)

Biden in the Obama White House was far more liberal than Biden as a senator. He supported same-sex marriage before Obama and most Democratic leaders, and he recommended diplomacy over war.  It is possible that Biden has been freer as he has no more campaigns to run, and no special interests to attend to.  Furthermore, his advanced age makes his lack of political ambition liberating.

When running for president, Biden expressed strong views about the Saudi regime and the murder of Khashoggi, the Washington Post columnist, which became a central preoccupation for the D.C. media elite.

Decades of Israeli killing of Palestinians was of no concern to the mainstream media, but they took the murder of Khashoggi personally, because he was writing for the Post, a main outlet of the media elite (regardless of the extent to which Khashoggi actually wrote his articles).

Biden promised to hold bin Salman accountable for the crime of killing Khashoggi and he even described the Saudi regime as “pariah” — a label that the U.S. reserves for its enemies.

But the Biden administration, unsurprisingly, failed to deliver on its promise. It not only failed to hold bin Salman accountable for the crime, but it has not treated the Saudi regime like a “pariah.”

Saudi newspapers have been filled in recent days with stories of meetings and phone conversations between Saudi and U.S. officials.  Central Command reassured the Saudi regime of the alliance between the two countries and the Near East Bureau of the State Department hailed the Saudi government for its generous help to the people of Yemen (actually, U.S. Special Envoy for Yemen Tim Lenderking delivered that message of American gratitude to the Saudi finance minister). 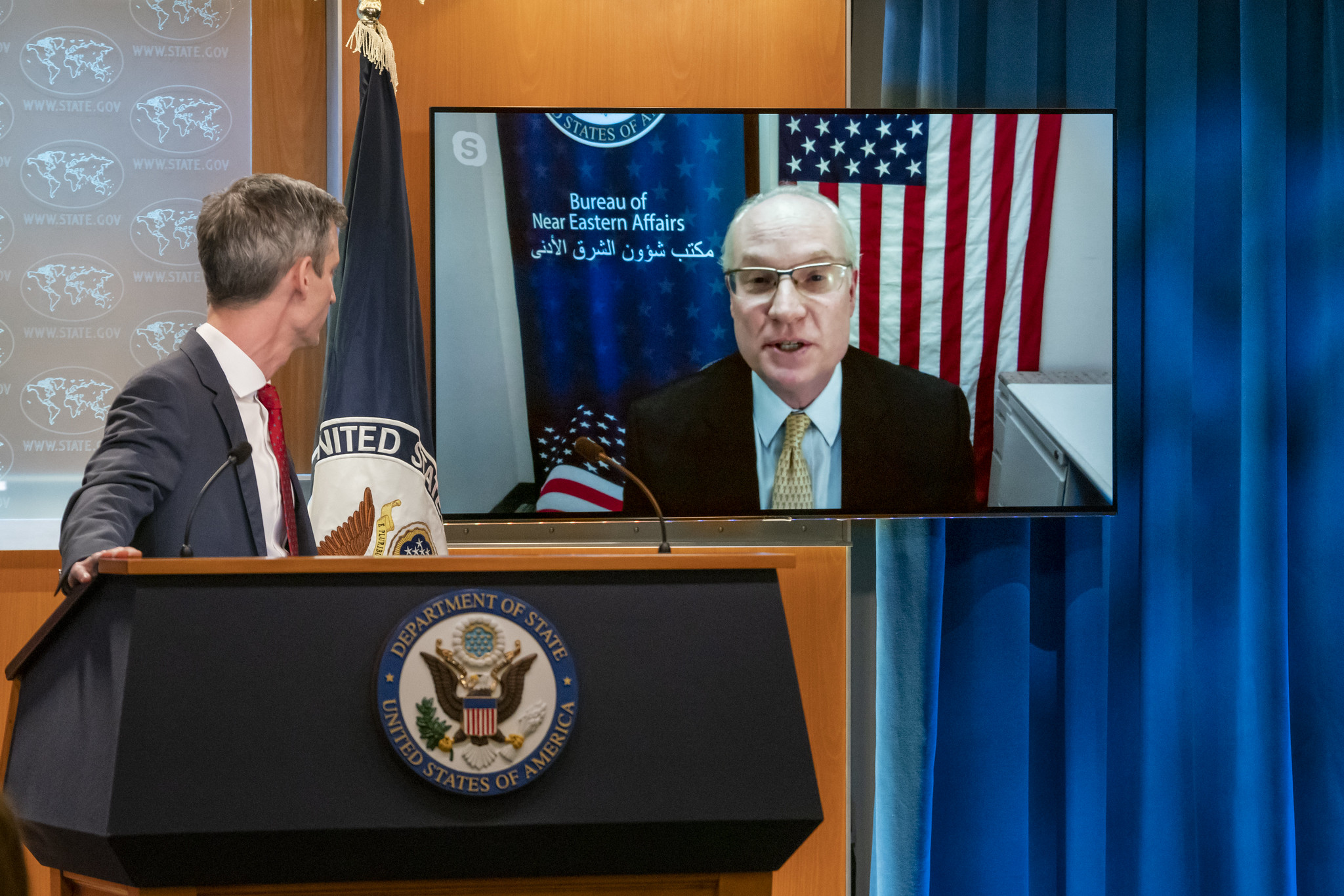 Lloyd Austin III, the new secretary of defense, spoke with MbS and stressed U.S. commitment to defend the regime, and Secretary of State Antony Blinken spoke with his Saudi counterpart (a cousin of MbS and a member of the royal family).

Biden’s toughness on MbS has been reduced to a reluctance to speak directly to him, although he did speak with his father, the king, who is something of an MbS hostage. We are told that Biden firmly insisted that the crown prince not be present during the phone call. But how could Biden know whether MbS was in the room or not? It’s most likely that he was there, coaching his father.

The Biden administration is simply following in the footsteps of the previous administration: prioritizing arms sales, regional domination and services to Israel in its policies in the Middle East. At the same time, it preserves the myth of U.S. concern for human rights by taking up violations in a handful of countries that don’t follow U.S. dictates. 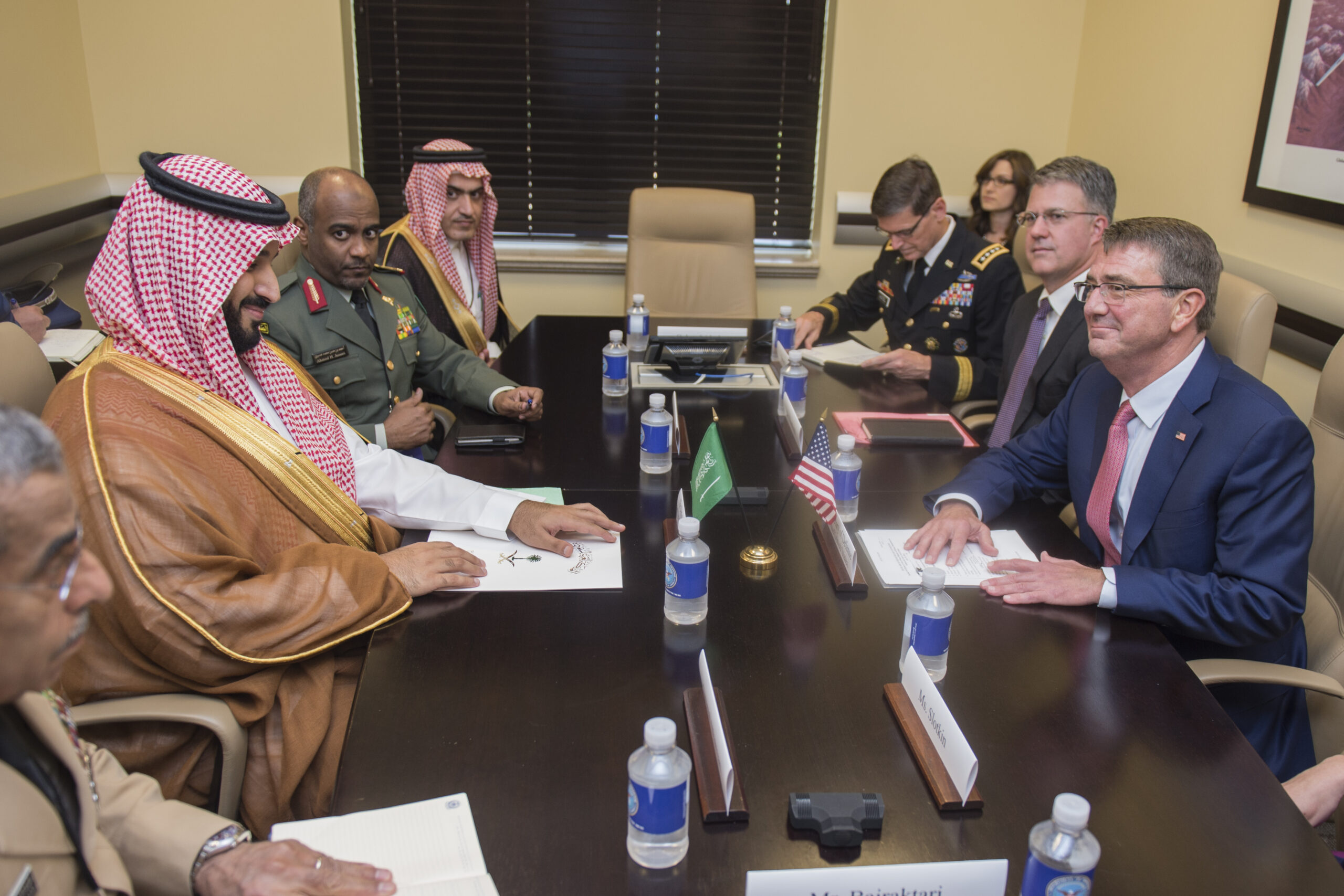 Thus, the U.S. is concerned over human rights in Russia and Venezuela but not in the UAE where the prison sentence for the “wrong tweet” reaches 15 years.  Biden is, like all Democratic and Republican presidents, trying to have it both ways: to preserve the U.S. regional tyrannical order while claiming — merely rhetorically — that his foreign policy upholds human rights.

Biden is sounding firm about MbS while all his subordinates are reassuring Saudi regime officials — often cousins of MbS and even MbS himself — that the U.S. is committed to defending “the country” — which basically means defending the regime against domestic opposition and foreign threats.

Biden’s policies sound farcical: the U.S. is planning to punish subordinates of MbS, whom it knows did not plan those murders; they simply committed them on behalf of the one-man ruler.  None of the 76 Saudis who are slapped with a ban are responsible for a decision that was taken by MbS. It is this one man who is spared any punishment by the tough administration of Biden.

Moreover, the Biden administration’s “calibration” of its policies toward the Saudi regime seem to mysteriously echo the recommendations of the Washington Institute for Near East Policy (long considered the research arm of the Israeli lobby).  One of the co-authors of the report was Dennis Ross himself, who was previously paid by Elliott Brody to write a pro-Saudi-regime article in The Hill.  Ross delivered on many occasions and he urged the U.S. to stand behind the Saudi despot, who he dubbed as “revolutionary”.

Trump was correct: none of those Gulf emirates, sultanates, sheikhdoms and kingdoms would have lasted if it was not for Western (chiefly American after the 1960s) military and political support.

A battle during the 1960s civil war in Yemen. (Public Domain/Wikipedia)

In the 1960s, many of those archaic regimes were tottering during the heyday of Nasserist Arab nationalism.  Israel and the West threw their lot in with the most reactionary forces in the Arab world and invested heavily in the destructive 1962-70 war in Yemen. (Typically, the U.S. was on the side of the reactionary, conservative monarchy, while Nasser was supporting the progressive republican forces).

The fate of MbS is in Biden’s hands and the president has made a determination — most likely at the behest of Israeli Prime Minister Benjamin Netanyahu with whom Biden spoke for an hour — to keep MbS in power.

Had Biden declared MbS persona non grata, it would have made it easier for opponents of MbS to take over. Now, MbS has been saved and the man who saved him had falsely promised to hold him accountable for his crimes. That man called the regime that he is now pledging to defend a “pariah” — but that was when he was running for office. That was a very long time ago.

14 comments for “THE ANGRY ARAB: Biden’s Waning Outrage at MbS”