Morocco’s aggression has not only put an end to the UN peace process but has also unleashed a second war, writes Sidi Omar. 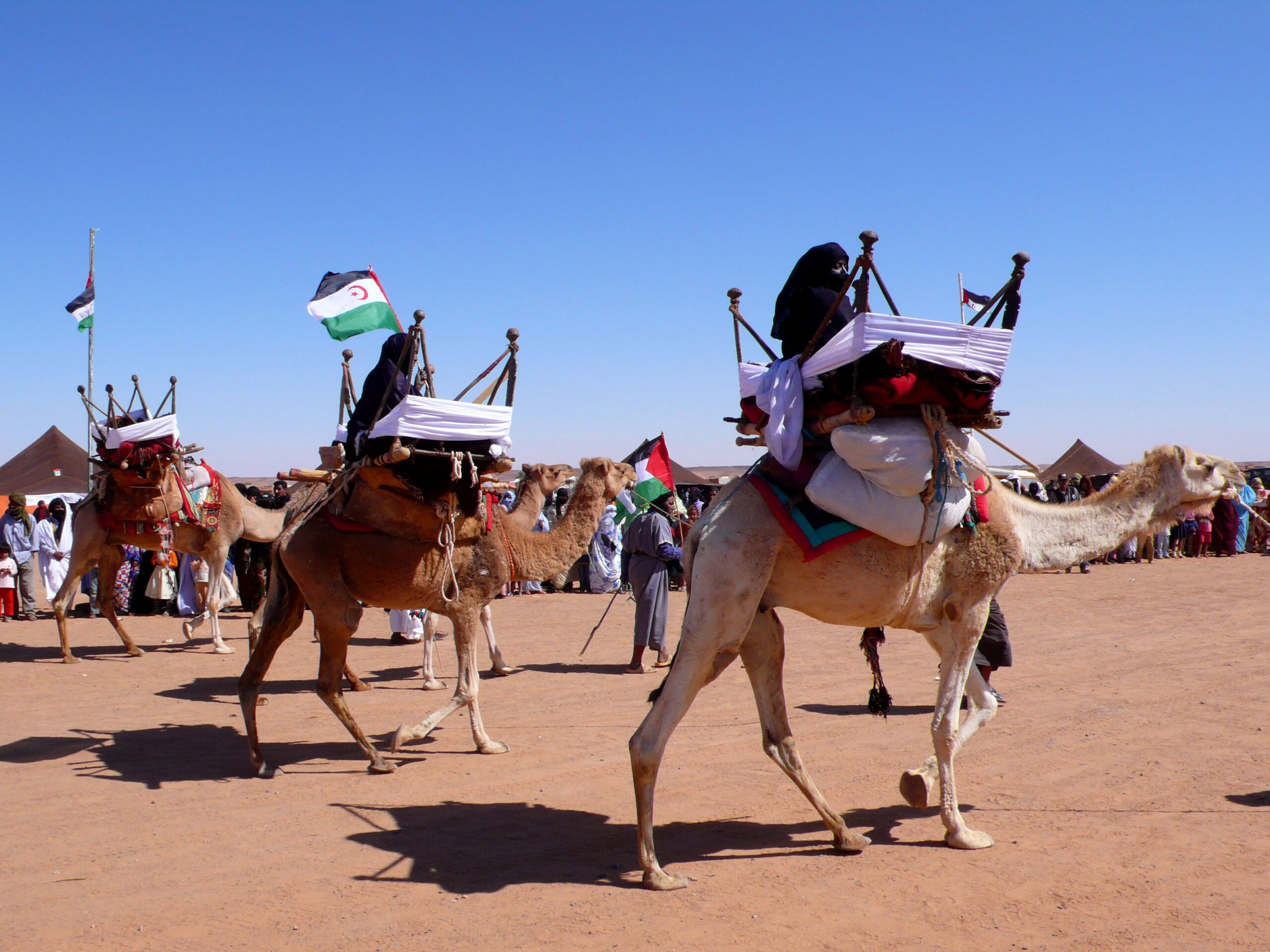 The first occurred on Nov. 13, 2020, when Moroccan forces breached the 1991 ceasefire by attacking Sahrawi civilians who were demonstrating peacefully in Guerguerat in southern Western Sahara.

Moroccan forces are reported to have moved into the Buffer Strip, in violation of ceasefire agreement, and attacked Sahrawi civilians protesting peacefully in #Guerguerat in south-west #WesternSahara. #Morocco assumes full responsibility for the consequences of its aggression. pic.twitter.com/P3TAjQlQkf

The second took place on Dec. 10, 2020, when outgoing U.S. President Donald Trump made a proclamation declaring U.S. recognition of “Moroccan sovereignty” over Western Sahara, which Morocco has been occupying since October 1975.

As expected, Morocco’s breach of the ceasefire forced the people of Western Sahara under the leadership of their legitimate representative, the Frente POLISARIO, to resume their legitimate liberation struggle put on hold since 1991.

At that time both parties, the Frente POLISARIO and Morocco, under the UN-OAU auspices, agreed on a ceasefire that came into effect on Sept. 6, 1991.

This arrangement was the first step in a process leading to the holding of a referendum in which the people of Western Sahara would choose, without military or administrative constraints, between independence and integration with Morocco.

To this end, on April 29 ,1991, the Security Council established under its authority the United Nations Mission for the Referendum in Western Sahara (MINURSO).

Notwithstanding the ups and downs, in January 2000 MINURSO was able to establish the list of potential voters for the referendum thus paving the way for the vote to take place. It was precisely at that moment that Morocco declared that it was no longer willing to procced with the self-determination referendum, obviously for fear of losing at the ballot box. It was as simple as that.

The failure of the UN Security Council to hold Morocco accountable for reneging on its solemn commitment to the mutually agreed referendum on self-determination brought the UN peace process in Western Sahara to a standstill, which continues to date.

Despite Morocco’s complete volte-face, for almost three decades the Frente POLISARIO maintained its commitment to the ceasefire and made many — often painful — concessions for the UN peace process to succeed.

The almost 30 years’ ceasefire in Western Sahara was however violently broken when Moroccan forces attacked Sahrawi civilians on Nov. 13, 2020, forcing the Frente POLISARIO to respond in self-defense. 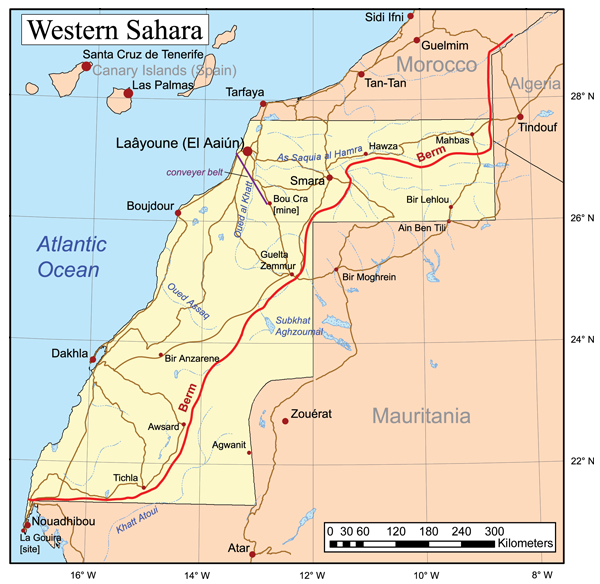 The proclamation made by the outgoing U.S. president in December has dealt another heavy blow to the UN peace process in Western Sahara. It is no secret that Trump’s ill-advised decision was a quid pro quo for the deal that Morocco concluded with Israel to normalize their relations — another example of his transactional diplomacy.

Trump’s decision however violates UN resolutions, including Security Council resolutions that the United States drafted and approved over the past decades, and upends the traditional U.S. policy regarding Western Sahara. 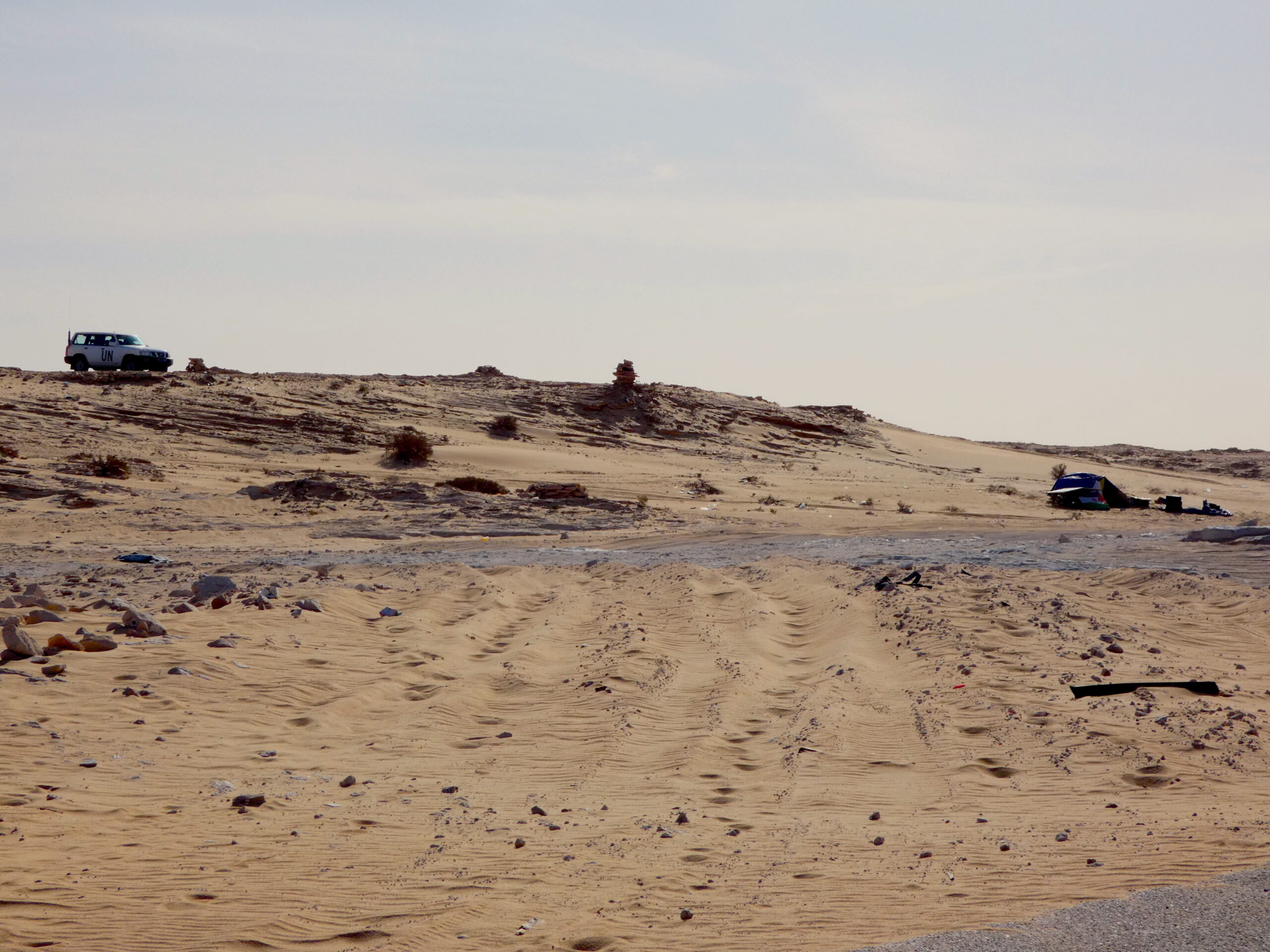 It flies in the face of fundamental rules underpinning the international order that prohibit the acquisition of territory by force and establish peoples’ right to self-determination and as an inalienable right and a peremptory norm.

It also hampers the ongoing efforts of the United Nations and the African Union to achieve a peaceful solution to the question of Western Sahara, thereby fueling tension and threatening peace and stability in the region.

The legal status of Western Sahara is unequivocally clear. The International Court of Justice (ICJ), which is the United Nations principal judicial organ, issued an advisory opinion on Western Sahara on Oct. 16, 1975. The ICJ ruled that there was no tie of territorial sovereignty between the Territory of Western Sahara and the kingdom of Morocco.

By rebutting Morocco’s claims of sovereignty over Western Sahara, the ICJ established clearly that the sovereignty over the territory was vested in the Sahrawi people who have the right to decide, through the free and genuine expression of their will, the status of the territory in accordance with UN General Assembly resolution 1514 (XV) of 1960 on the “Declaration on the Granting of Independence to Colonial Countries and Peoples.”

The United Nations and the Organisation of African Unity (now the African Union) as well as the European Union have never recognized Morocco’s forcible and illegal annexation of parts of Western Sahara that remains on the UN list of Non-Self-Governing Territories to be decolonized.

Trump’s proclamation also affirmed the U.S. support for Morocco’s “autonomy proposal.” This proposal, besides its proven illegality, emanates from an autocratic regime that seeks only to legitimize its forcible acquisition and occupation of parts of Western Sahara.

US Should Advise Morocco 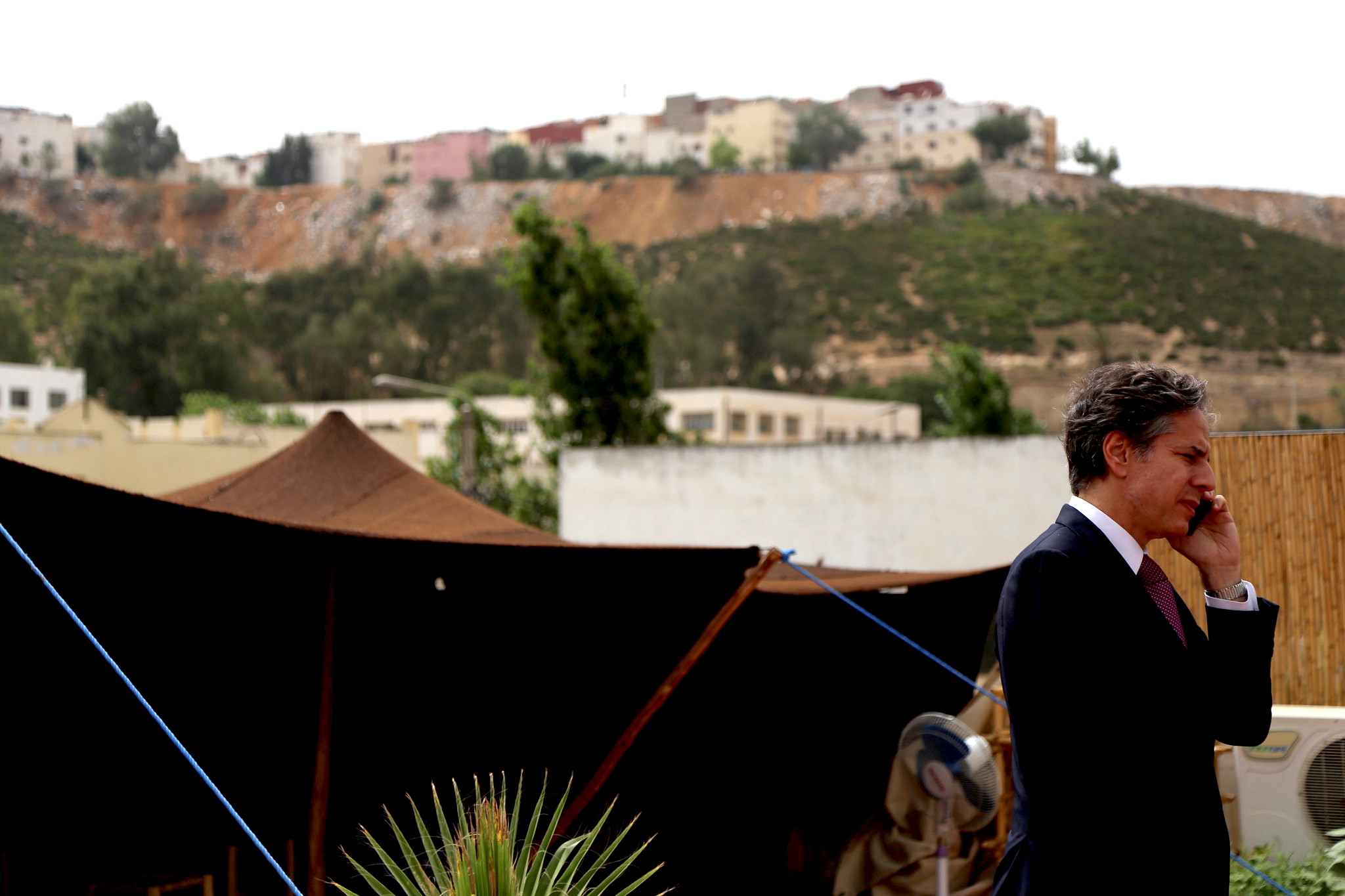 July 20, 2016: Then Deputy Secretary of State Antony Blinken — now secretary of state —  on a phone call in Morocco ahead of a UN climate conference. (State Department)

The United States should therefore advise Morocco to address the legitimate grievances of its own people instead of trying to pursue its expansionism that has had disastrous consequences for the entire region.

As a matter of historical fact, Morocco did not only claim Western Sahara but also Mauritania in 1960s. It was Morocco that included “the problem of Mauritania” in the agenda of the 50th session of the UN General Assembly in 1960 on the grounds that Morocco had legitimate rights over Mauritania. It then took Morocco nine years to recognize Mauritania as an independent country.

Morocco moreover used force against Algeria in October 1963 and Spain (Perejil Island) in July 2002, always in pursuit of its territorial claims, which demonstrates the real nature of the ruling regime in Morocco. 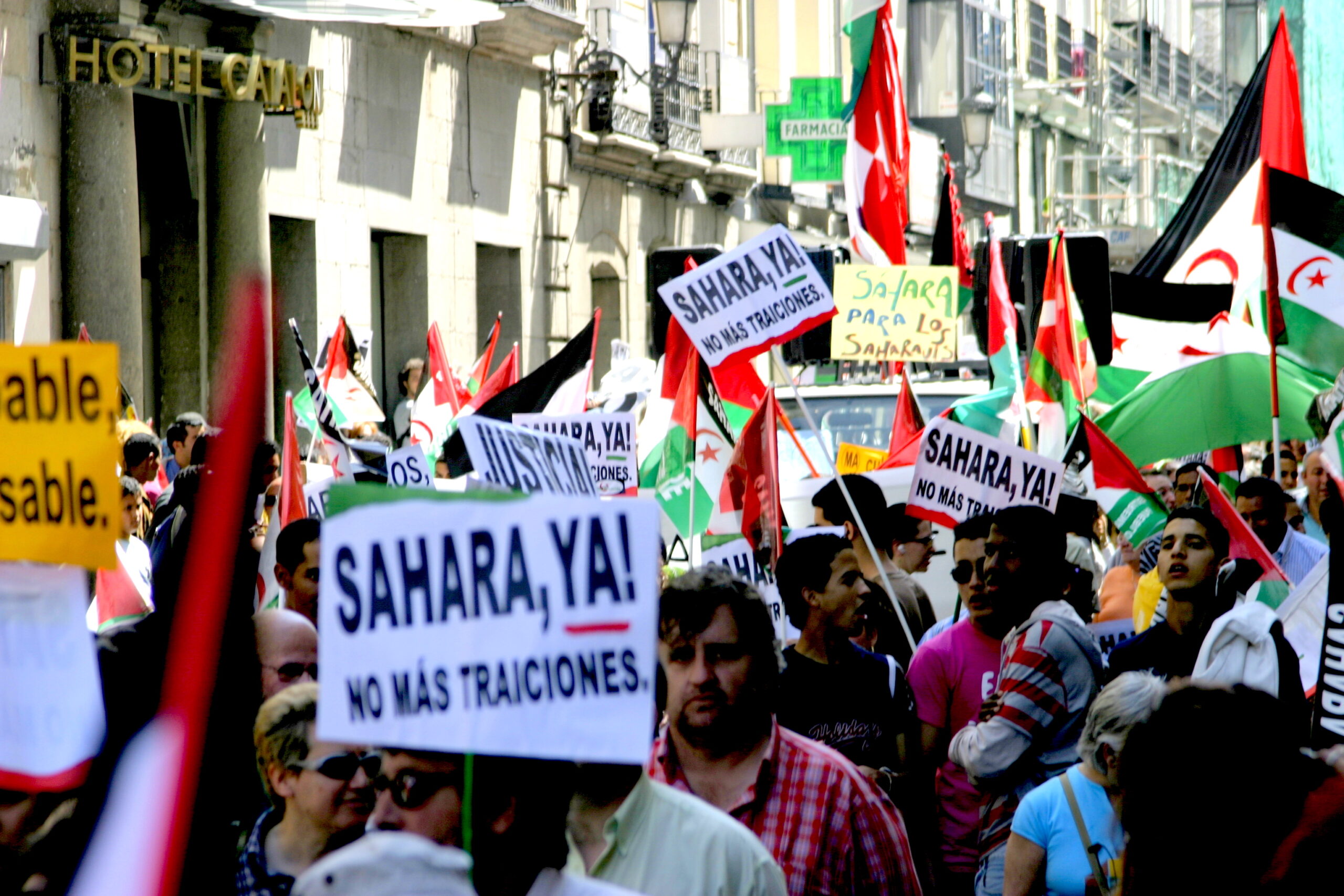 2007 demonstration in Madrid for the independence of Western Sahara. (viajar24h.com 097, CC BY 2.0, Wikimedia Commons)

This also shows the extent to which the regime owes its survival to territorial conquest as a tool to divert attention from its deep-rooted domestic legitimacy crisis that had led to two coups against the monarchy in July 1971 and August 1972.

Morocco’s expansionism is therefore the root cause of the enduring tension in North Africa and the main obstacle to the achievement of a united, prosperous, and inclusive Maghreb that brings together all its nations and peoples.

As expected, strong voices from the U.S. Congress, civil society and the political arena, including former U.S. Secretary of State James A. Baker, have expressed their shock and disappointment regarding the attempt to trade away the self-determination of the people of Western Sahara.

They have also called on the new president to reverse Trump’s decision, which is at odds with the new administration’s declared pledge to recommit the U.S. to multilateralism.

Today, @SenatorLeahy and I led 25 of our Senate colleagues in sending a letter urging @POTUS to reverse the previous misguided decision and recommit the U.S. to the pursuit of a referendum on self-determination for the Sahrawi people of Western Sahara. https://t.co/lceKxCoczP pic.twitter.com/dTaDvqUT2e

Now the question is whether President Joe Biden is willing to reverse Trump’s decision and bring back the United States to its traditional position on Western Sahara.

It is certain that Trump’s proclamation — if maintained — will not change anything substantially in terms of the realities on the ground and the legal status of Western Sahara that is determined by the UN resolutions. It will however put the United States in a rather difficult situation given its membership of the Group of Friends on Western Sahara and the penholder for MINURSO.

In other words, it will not only cast doubt on U.S. neutrality vis-à-vis the question of Western Sahara but will also raise the question of whether the United States could continue to play a constructive role in the UN peace process.

For these reasons, the Sahrawi people remain hopeful that Biden would rescind Trump’s proclamation so that the United States could return to its traditional position on Western Sahara.

The legal and political nature of the issue of Western Sahara as a decolonization case is unquestionably clear. Therefore, the question before the international community, in particular all peace- and justice-loving countries, comes down to this: do they allow the rule of “might makes right” to prevail in the case of Western Sahara, and thus allow the Moroccan military occupation of parts of the Territory to continue with impunity, or do they defend the fundamental principles underpinning the existing international order and thus implement UN resolutions on the issue?

This means that no solution will prove either just or lasting if it does not have the consent and full support of the Sahrawi people.

This support can only be expressed through a credible, democratic, and genuine self-determination process that gives our people the opportunity to make their choice among a full range of options including independence.

United Nations resolutions, rules of international law and basic democratic principles all support this understanding of self-determination and its implementation. It is time the international community support it, too, not only in words but also in deeds.