These accounts could remain demonetized for months, or forever,  writes Caitlin Johnstone. This is censorship. 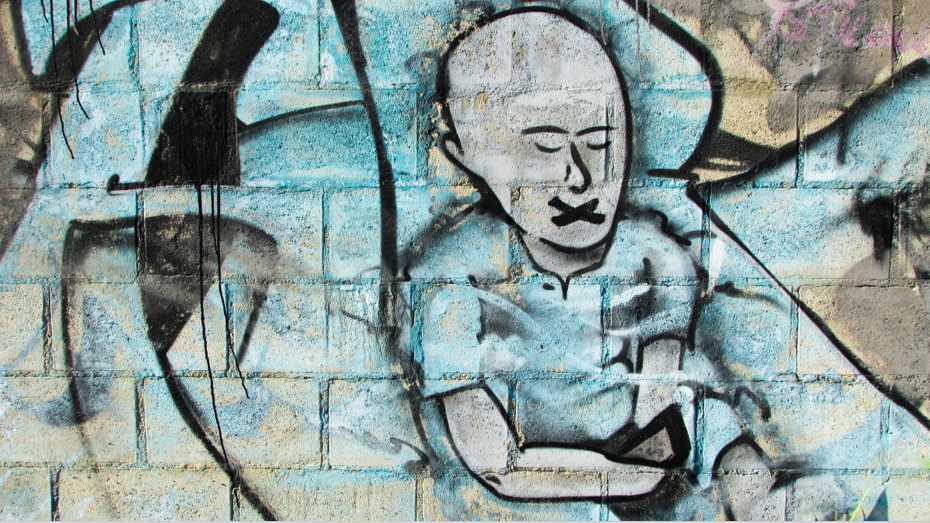 Progressive commentators Graham Elwood, The Progressive Soapbox, The Convo Couch, Franc Analysis, Hannah Reloaded and Cyberdemon531 have all received notifications from YouTube that their videos are no longer permitted to earn money through the platform’s various monetization features, as has Ford Fischer, a respected freelancer who films U.S.  political demonstrations. No explanation has been offered for this decision beyond the vague claim that “your channel is not in line with our YouTube Partner Program policies” due to “harmful content.”

You guys have destroyed my channel without legit explanation as to why. No videos are given – and frankly there is literally zero "harmful' content on my channel. This is a radically bad error that needs to be corrected. @TeamYouTube @YouTubeCreators @YouTube

Like all large online platforms, YouTube’s appeals process is notoriously opaque and unaccountable. These accounts could remain demonetized for months, or forever, without any clear explanation at all. Ford Fischer, who has been in this situation before, said on Twitter that his account was left demonetized for seven months before YouTube reversed its decision.

“Last time you demonetized my channel, I spoke out for seven months. I didn’t delete a single piece of content. You admitted you were wrong. I forgive you. Please don’t do this again,” Fischer tweeted. 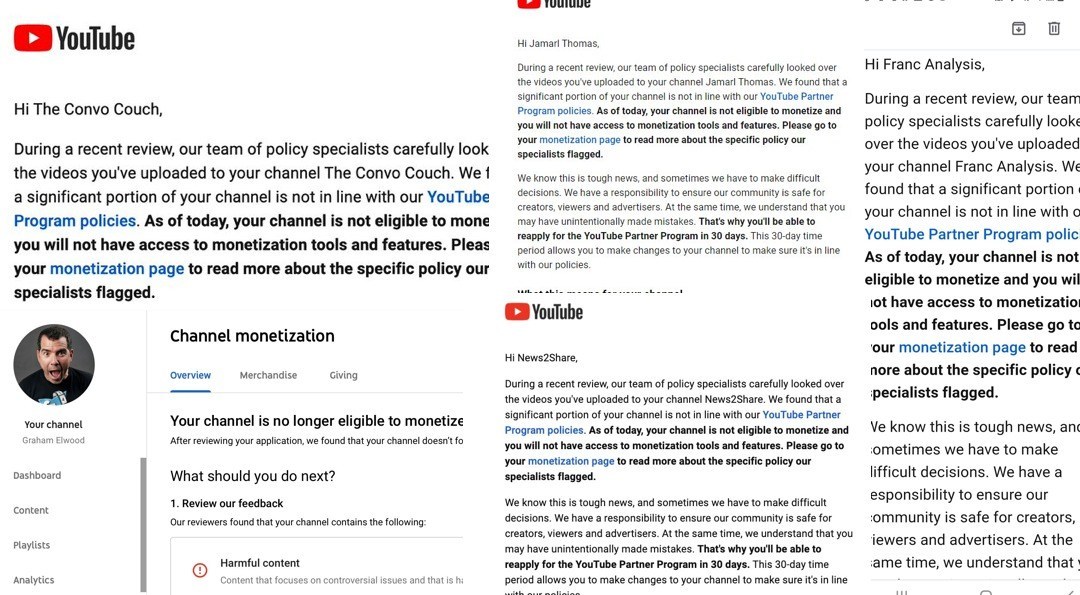 “No superchats, no ad revenue, no YouTube premium money,” tweeted Elwood, who also said “I have a call with my lawyers later today.”

“You guys have destroyed my channel without legit explanation as to why,” tweeted Jamarl Thomas of Progressive Soapbox. “No videos are given – and frankly there is literally zero ‘harmful’ content on my channel. This is a radically bad error that needs to be corrected.”

The Convo Couch’s Jonathan Mayorca tweeted the notification he received from YouTube which gave the reason as “Harmful content: Content that focuses on controversial issues and that is harmful to viewers,” saying no specific video or subject was named. Nobody receiving these notifications appears to have any idea what is meant by “harmful” or “controversial” or why YouTube is mentioning them in the same breath as though these two things are connected or synonymous in some way.

Demand @YouTubeCreators allow @grahamelwood to monetize his channel! Open discussion is crucial to a healthy society. Graham’s livelihood is being taken away because he doesn’t bow down to corporate talking points! https://t.co/fAXom5OPAy

YouTube has been providing template responses saying “We recommend making the needed changes to your content and reapply in 30 days” while refusing to specify what the “needed changes” even are.

I would not be able to create content at anywhere near the pace I do were I not making enough money from it to do it full time. Life is far too demanding with far too much else going on for me to be able to maintain anything like daily output; being financially de-platformed and having to get another job would force me down to an essay a week in my spare time, if that. Anyone who works in independent media full time knows this, and so do the powerful people who are steadily ratcheting up the campaign to silence anyone who hasn’t passed through the gatekeepers of the plutocratic media.

Financial de-platforming is censorship. People were given an opportunity to devote themselves to the vocation of creating media outside the gatekeeping apparatus of billionaire news institutions, which is arguably the single most important vocation anyone can give themselves to in our world right now, and they built their lives around their ability to do this. Now it’s being ripped away from them; their literal jobs are being taken away. They were offered a reason to think they’d be able to make a living doing very important work, and then they were sucker punched with what amounts to political censorship.

This has been a continually escalating trend for years. The general population is herded onto huge monopolistic social media platforms offering democratization of information where your voice can be heard, and then those platforms proceed to censor an increasing amount of political speech in increasing coordination with the U.S.  government.

If the democratization of information online is successfully reversed and the mass media gatekeepers are again the sole authorities on what’s real and true, people will be locked into forming their ideas on how to think, act and vote based on what they are told by the same plutocratic media institutions which have been deceiving them into every war and manipulating them into accepting the status quo for generations.

If the door is locked to the possibility of a grassroots information rebellion against the narrative hegemony of our rulers, we will remain doomed to continue along the same ecocidal, omnicidal trajectory these bastards have us on until it reaches its inevitable conclusion. This must be resisted.

Caitlin Johnstone is a rogue journalist, poet, and utopia prepper who publishes regularly at Medium. Her work is entirely reader-supported, so if you enjoyed this piece please consider sharing it around, liking her on Facebook, following her antics on Twitter, checking out her podcast on either Youtube, soundcloud, Apple podcasts or Spotify, following her on Steemit, throwing some money into her tip jar on Patreon or Paypal, purchasing some of her sweet merchandise, buying her books Rogue Nation: Psychonautical Adventures With Caitlin Johnstone and Woke: A Field Guide for Utopia Preppers.

← In Search of Tomorrow
LETTER FROM LONDON: Craig Murray, Independence for Scotland, and a Trial in Edinburgh →