An honorable democracy movement that held its head high for many decades now falls to Beijing’s heavy hand after U.S. meddling. 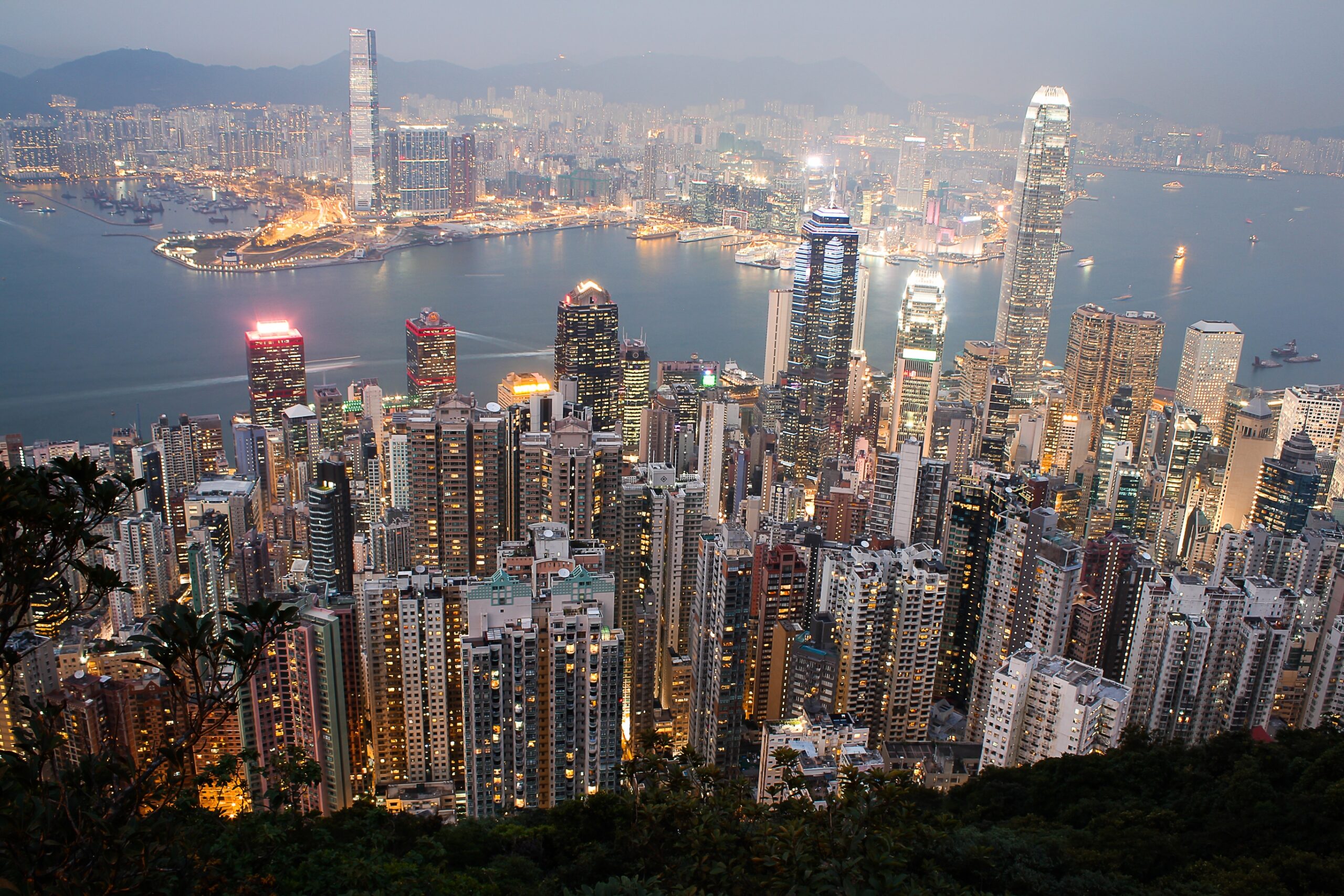 Midway in a week of shocking news, I awakened last Wednesday to a piece in  Asia Sentinel that made my heart sink lower than everything else I had read by then. Our apple-pie authoritarianism, now manifest in a frenzy of censorship, is frightening enough. What is going on in Hong Kong is magnitudes worse.

An honorable democracy movement that held its head high for many decades now falls to Beijing’s heavy hand. Six months after China imposed a Draconian, vaguely worded National Security Law on the former British colony, we now read of mass arrests and imminent charges of sedition.

As of last week, this goes well beyond window-smashing student protesters swept up in street demonstrations. Elected legislators, professors, and other professionals are now being detained to face trials and potential prison terms. If this is not the end of Hong Kong’s principled quest for a democratic future, it begins to look awfully like it.

The worst of this tragedy — the very worst — lies in the bitter reality that cynical, covert American meddling in pursuit of another “color revolution” has made a mess of a once-admirable campaign and left China, which has fretted over its territorial integrity for millennia, little choice but to intervene.

The Sentinel, an always-informative online journal that publishes in Hong Kong, reported last Wednesday that the Hong Kong authorities had overnight arrested 53 opposition legislators and political activists for “subverting state power,” as a police spokesman put it. Among these was Claudia Mo, one of the pro-democracy members of the Legislative Council who recently resigned en masse to protest the National Security Law and its vigorous enforcement since it was enacted last June.

All but one of those arrested last week were subsequently released on bail. But on Sunday, more bad news. From the Sentinel :

Most of the 53 people arrested in Hong Kong on Jan. 6 are likely to be re-arrested and charged under the National Security Law, with some expected to be sentenced to prison, according to a well-wired Hong Kong-based risk consultant. All have had their passports seized to prevent them from leaving the territory.

Some background here. Mo was an Agence France–Presse correspondent before going into politics and is married to Philip Bowring. Bowring, long the most distinguished journalist active in Asia, co-founded Asia Sentinel after editing the sadly defunct Far Eastern Economic Review. Hong Kong authorities have confiscated Mo’s and Bowring’s computers, though the latter was not arrested.

In observance of transparency, Claudia Mo and Philip Bowring are friends of many years. The thought that one of them may now go to prison and the other prevented from practicing his craft is an ending to the Hong Kong democracy story that no one who knows the story could possibly have imagined even a few years ago.

Hong Kong’s democracy movement has its roots in the early 1980s, when Beijing and London were negotiating what became the Sino–British Declaration, which set the terms for Hong Kong’s status as a Special Administrative Region (with a high degree of autonomy) for 50 years after the territory reverted to Chinese sovereignty in 1997.

I knew the story intimately, having reported it for several years for The Christian Science Monitor and subsequently for the International Herald Tribune. The integrity and passion of those leading the movement were authentic and beyond doubt. So was their intelligent assessment of the chessboard across from which sat those Beijing officials charged with managing relations with a territory that had become a matter of considerable sensitivity after the 1997 handover.

Hong Kong had developed an identity of its own by then — a point the Chinese missed. The British either missed it or were indifferent to it, and I was never quite certain which.  But there was no question of independence then, so far as I could discern. The project was to achieve self-determination within the bounds of the Sino–British accord and the constitution it included, known as the Basic Law. With the Dengist reforms gathering momentum on the mainland at the time, this was broadly accepted as a legitimate aspiration. 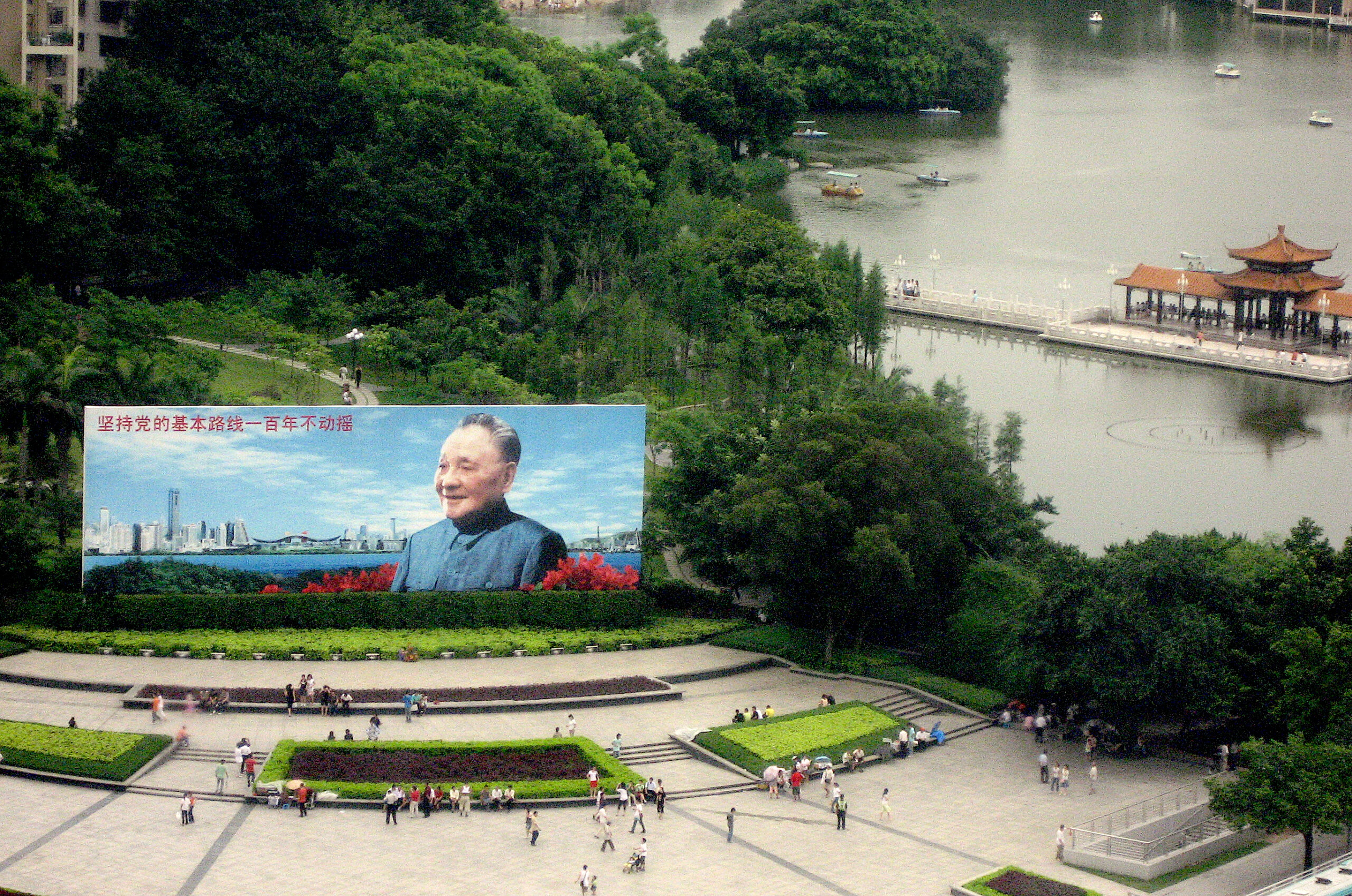 Just when the complexion and tilt of the movement began to change is a very good question, and there may be no precise answer. But we have a good clue. In 2012 the National Democratic Institute (NDI), which functions as a subsidiary of the U.S. National Endowment for Democracy (NED), began funding “civil society” projects in Hong Kong. These expenditures, underwritten by the NED, reportedly came to nearly $500,000 yearly, a figure I cannot confirm but have no reason to doubt.

The NED, funded by an annual grant from Congress, is well-known for its destabilization programs abroad by way of its support for various “civil society” groups and nongovernmental organizations opportunistically open to covert American interventions.

It was notably active in various of the “color revolutions” in nations previously in the Soviet orbit: Georgia (rose, 2003), Ukraine (orange, 2004), Kyrgyzstan (tulip, 2005). The NED was founded in 1983, when the national security state determined to shift the coup function from the Central Intelligence Agency to the cover of “democratization” campaigns that gave a prettier appearance, as The Washington Post‘s  David Ignatius explictly spelled out in 1991. 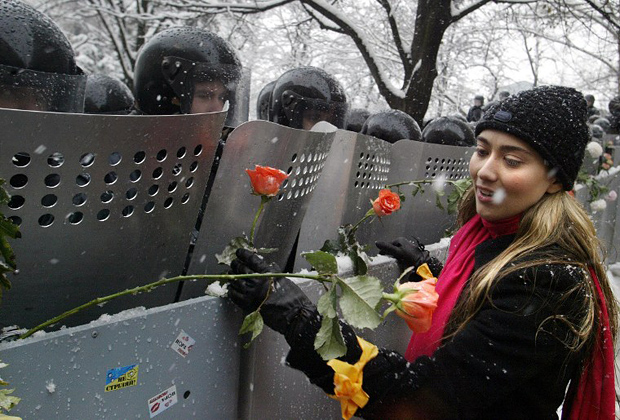 As to the NDI , it is chock-a-block with interventionists in the liberal mode. It is chaired by none other than Madeleine Albright, the former secretary of state and a faithful apostle of American aggressions. On its board are Denis McDonough, Barack Obama’s deputy national security adviser and later chief of staff; Barbara Mikulski, the former Maryland senator, and Suzy George, chief of staff on Obama’s National Security Council. Let there be no doubt as to the importance the Democratic elite attaches to this group and its activities.

The NDI was also founded in 1983 and has been increasingly active in Hong Kong since the handover. It is the usual menu: The institute has cultivated dense contacts with political parties, the universities, the media, and the civil-society scene “to discuss the political environment in Hong Kong,” as one of its reports explains. 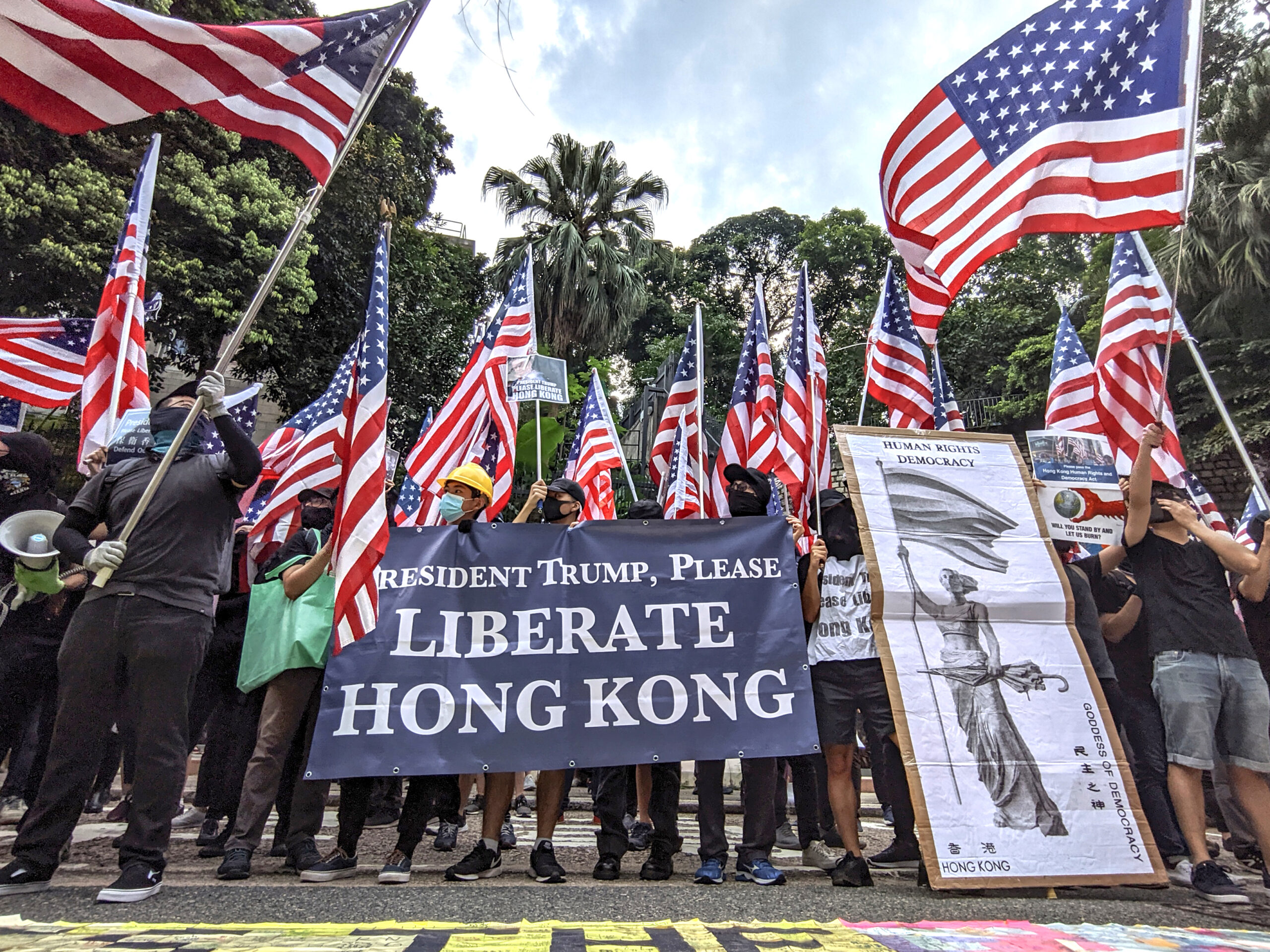 Two years after the NDI began funneling funds into Hong Kong, the Occupy Central movement shut down the business and financial district. Then the NED stepped in and began to support various Hong Kong groups directly. This figure is a matter of record. The NED spent upward of $1.8 million on civil society groups in Hong Kong from 2017 to 2020.

This is very unlikely to be the full picture of Washington’s doings in Hong Kong. But of what we know, where did all this money go? The NDI has reportedly supported the Confederation of Trade Unions, the Hong Kong Journalists Association, and the Civic, Labor, and Democratic parties.

NDI documents also indicate it has taken an abiding interest over many years with various pro-democracy groups associated with the recent unrest, including Scholarism and Demosisto, both of which were founded by Joshua Wong, the celebrated activist. Scholarism disbanded in 2016; Demosisto did so a few hours after the national security law was promulgated last June. 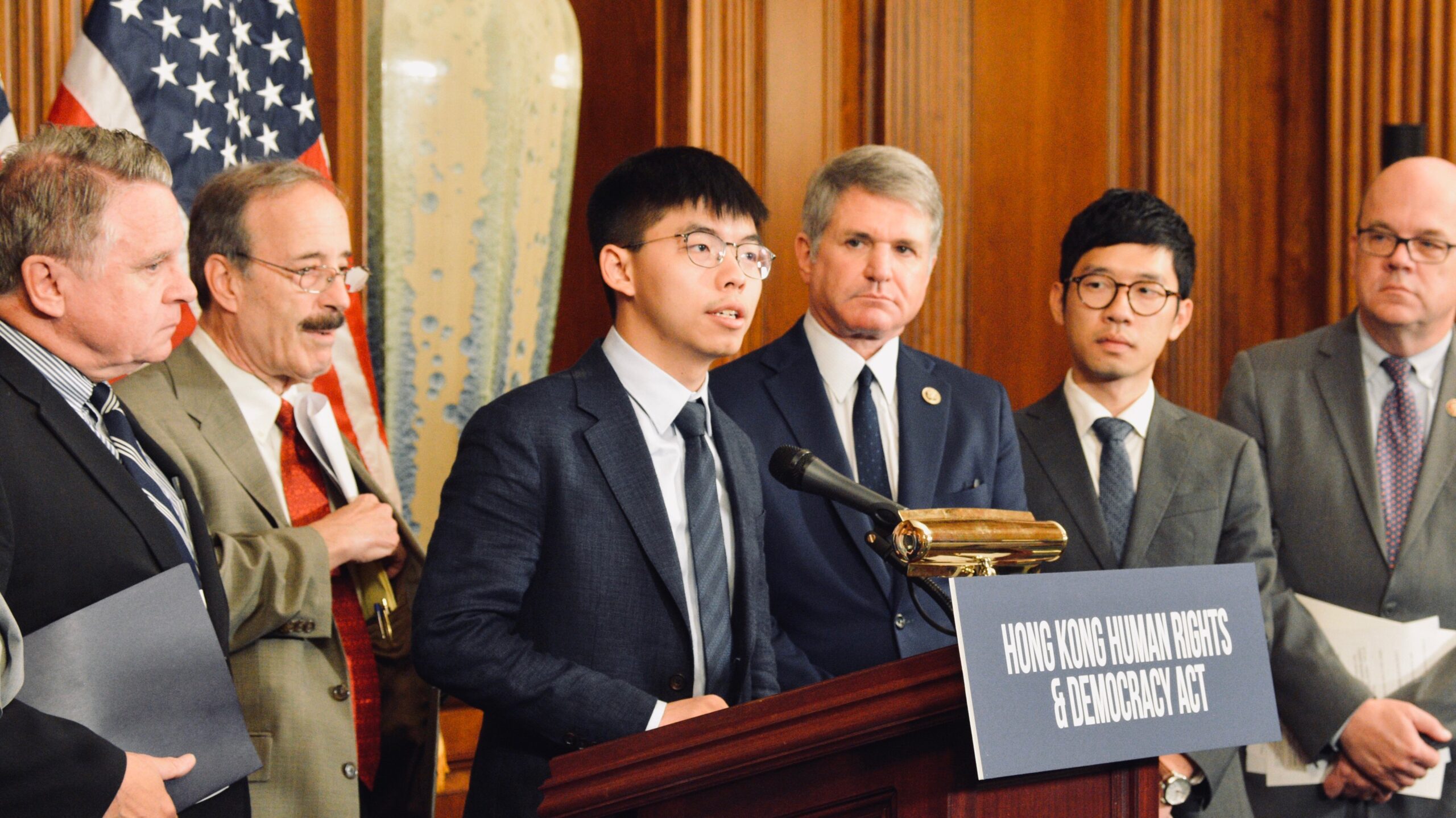 I count those in Hong Kong who accepted funds from Washington’s two coup-cultivating organizations traitors to a worthy cause. However well-intentioned, I also count them stupid, tactically and strategically. Did they think the Chinese would remain unaware of or indifferent to their connections with the NDI and NED?

Did Joshua Wong, all of 23 at the time, think it wise to meet with Julie Eadeh, a political officer from the U.S. Consulate, and later testify on the Hong Kong question before Congress? Did Jimmy Lai, the anti–Beijing newspaper publisher, think it nifty to meet with Vice–President Mike Pence and the crazily anti–Chinese Mike Pompeo, secretary of state at the time?

The Americans, if this is not already evident, do not give a tinker’s damn about democracy in Hong Kong — or anywhere else they intervene in democracy’s name, for that matter. They wanted a provocative geopolitical incident on China’s southern flank and they got one. Did the activists with too much influence and too little experience miss this?

These people ought to have held to first principles and told the Americans: This is our movement and our fight. We will wage it while guarding our independence and take no interest in your machinations. Instead, they gave Beijing just the cause it needed to intervene and are now responsible for Claudia Mo and numerous others facing trials and imprisonment.

No matter now, I suppose. Good people may now be headed for prison, having been let down by others too young to know what they are doing or too unsophisticated to navigate treacherous waters to the best-possible outcome.

It is done. It is a shame and did not have to be.

Footnote: We lost two great correspondents in recent weeks. Tak Oka, a long-serving Tokyo correspondent for The Christian Science Monitor and a wonderful man to all who knew him, died Dec, 2. Neil Sheehan, who reported Vietnam honorably for UPI and The New York Times and later broke the Pentagon Papers story, left us Jan. 7 . They don’t make them like this anymore.

20 comments for “PATRICK LAWRENCE: US Meddling in Hong Kong”