Jonathan Cook says that opponents have become brilliant at deploying smears that alienate some of the natural constituencies of victims such as Assange, Corbyn and  Varoufakis. 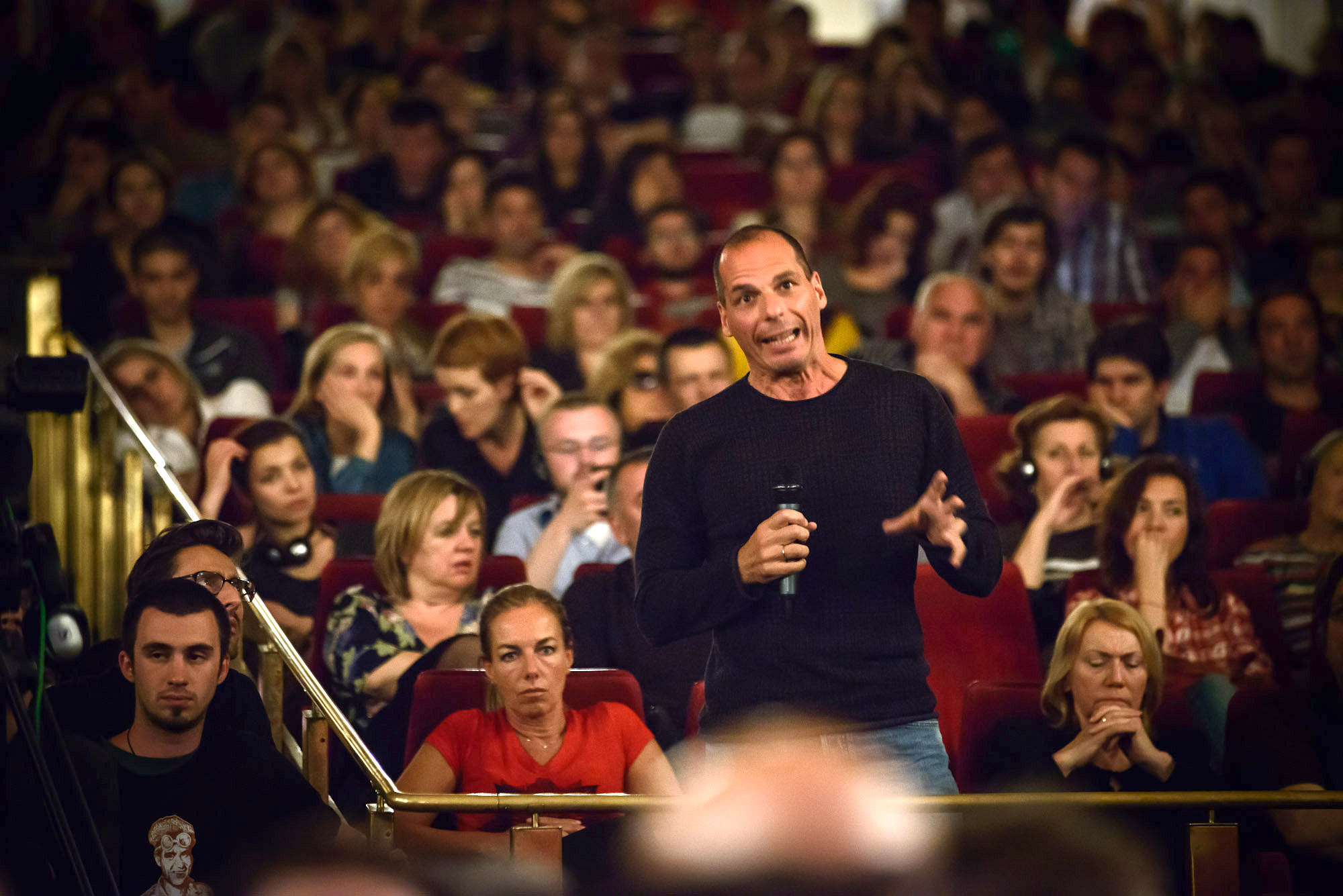 There was a fascinating online panel discussion on Wednesday night on the Julian Assange case that I recommend everyone watch. The video is at the bottom of the page.

But from all the outstanding contributions, I want to highlight a very important point made by Yanis Varoufakis that has significance for understanding current events well beyond the Assange case.

Varoufakis is an academic who was savaged by the Western political and media establishments when he served as Greece’s finance minister. Back in 2015 a popular leftwing Greek government was trying to oppose the imposition of severe loan conditions on Greece by European and international financial institutions that risked tipping the Greek economy into deeper bankruptcy and seemed chiefly intended to upend its socialist program. The government Varoufakis served was effectively crushed into obedience through a campaign of economic intimidation by these institutions.

Varoufakis describes here the way that leftwing dissidents who challenge or disrupt Western establishment narratives – whether it be himself, Assange or the U.K.’s former Labour Party Leader Jeremy Corbyn – end up not only being subjected to character assassination, as was always the case, but nowadays find themselves being manipulated into colluding in their own character assassination.

Here is a short transcript of Varoufakis’ much fuller comments – about 48 minutes in – highlighting his point about co-option:

“The establishment, the Deep State, call it whatever you want, the oligarchy, they’ve become much, much better at it [character assassination] than they used to be. Because back in the 1960s and 1970s, you know, they would accuse you of being a Communist. They would accuse me of being a Marxist. Well, I am a Marxist. I’m really not going to suffer that much if you accuse me of being a left-winger. I am a left-winger!

Now what they do is something far worse. They accuse you of something that really hurts you. Calling somebody like us a racist, a bigot, an antisemite, a rapist. This is what really hurts because if anybody calls me a rapist today, right, even if it’s complete baloney, I feel as a feminist I have the need to give the woman, implied or involved somehow in this accusation, the opportunity to speak against me. Because that is what we left-wingers do.”

Varoufakis’ point is that when Assange was accused of being a rapist, as he was before the U.S. made clear the real case against him – by trying to extradite him from the U.K.  for exposing its war crimes in Iraq and Afghanistan – he could not defend himself without alienating a significant constituency of his natural supporters, those on the left who identify as feminists. Which is exactly what happened.

Similarly, as Varoufakis notes from earlier conversations he had with Assange, the WikiLeaks founder was in no position to properly defend himself against accusations that he colluded with Russia and Donald Trump to help Trump win the 2016 U.S.  presidential election against Hillary Clinton and the Democrats.

At the time, Assange’s supporters were able to point out that the leaked emails were true and that they were in the public interest because they showed deep corruption in the Democratic Party establishment. But those arguments were drowned out by a narrative confected by the U.S.  media and security establishments that WikiLeaks’ publication of the emails was political interference because the emails had supposedly been hacked by Russia to sway the election result.

Because Assange was absolutely committed to the principle of non-disclosure of sources, he refused to defend himself in public by confirming that the emails had been leaked to him by a Democratic Party insider, not the “Russians.” His silence allowed his vilification to go largely unchallenged. Having already been stripped of support from much of the feminist left, particularly in Europe, Assange now lost the support of a sizeable chunk of the left in the U.S.  too.

In these cases, the one who stands accused has to defend themselves with one hand tied behind their back. They cannot hit back without further antagonizing a substantial section of their supporters, deepening divisions within the left’s ranks. The victim of this kind of character assassination is caught in the equivalent of reputational quicksand. The more they fight, the deeper they sink.

Which is, of course, exactly what happened to the former U.K. Labour Party Leader Jeremy Corbyn when he was accused of being a racist. If he or his supporters tried to challenge the claim that the party had become anti-Semitic overnight under his leadership – even if only by citing statistics that showed the party hadn’t – they were immediately denounced for supposed “anti-Semitism denial,” posited as the modern equivalent of Holocaust denial.

Notice Ken Loach, who was also on the panel, nodding in agreement as Varoufakis speaks. Because Loach, the noted leftwing, anti-racist film-maker who came to Corbyn’s defense against the confected media campaign smearing him as an anti-Semite, soon found himself similarly accused.

Jonathan Freedland, a senior columnist at the liberal Guardian, was among those using precisely the tactic described by Varoufakis. He tried to discredit Loach by accusing him of denying Jews the right to define their own experience of anti-Semitism. 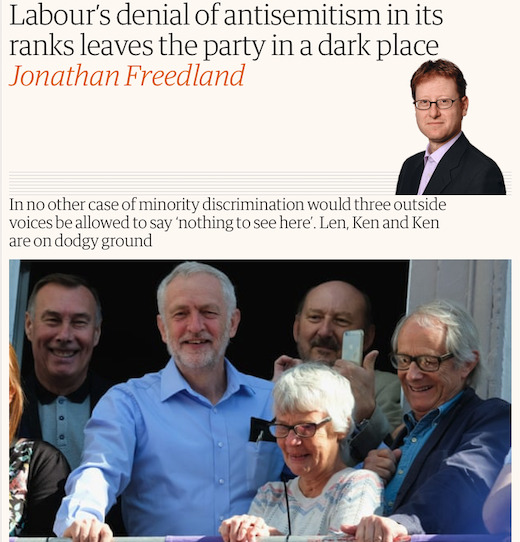 Freedland sought to manipulate Loach’s anti-racist credentials against him. Either agree with us that Corbyn is an anti-Semite, and that most of his supporters are too, or you are a hypocrite, disowning your own anti-racist principles – and solely in the case of anti-Semitism. And that, QED, would prove you too are motivated by anti-Semitism.

Loach found himself with a terrible binary choice: either he must collude with Freedland and the corporate media in smearing Corbyn, a long-standing friend, or else he would be forced to collude in his own smearing as an anti-Semite.

It’s a deeply ugly, deeply illiberal, deeply manipulative, deeply dishonest tactic. But it is also brilliantly effective. Which is why nowadays rightists and centrists use it at every opportunity. The left, given its principles, rarely resorts to this kind of deceit. Which means it can only bring a peashooter to a gun fight.

My latest: George Monbiot, supposedly the Guardian's 'conscience of the left', offered his followers two feeble excuses for failing to raise his voice in support of Julian Assange against the US extradition bid. But this time his excuses simply won't wash https://t.co/ACc0vdN0fF

This is the left’s dilemma. It’s why we struggle to win the argument in a corporate media environment that not only denies us a hearing but also promotes the voices of those like Freedland trying to destroy us from the center and those supposedly on the left like George Monbiot and Owen Jones who are too often destroying us from within.

As Varoufakis also says, the left needs urgently to go on the offensive.

We need to find ways to turn the tables on the war criminals who have been gaslighting us in demanding that Assange, who exposed their crimes, is the one who needs to be locked up.

We need to make clear that it is those who are so ready to smear anti-racists as anti-Semites – as Corbyn’s successor, Sir Keir Starmer, has done to swaths of Labour Party members – who are the real racists.

And we need to unmask as war hawks those who accuse the anti-war left of serving as apologists for dictators when we try to stop Western states conducting more illegal, resource-grab wars with such devastating results for local populations.

We must get much more sophisticated in our thinking and our strategies. There is no time to lose.

← Capitol Incident a Dress Rehearsal
Forever Wars: Will They Ever End? →

20 comments for “Colluding in Character Assassination”