Biden’s nominee is a drone assassin who played a key role in covering up the U.S. torture program, write Medea Benjamin and Marcy Winograd. 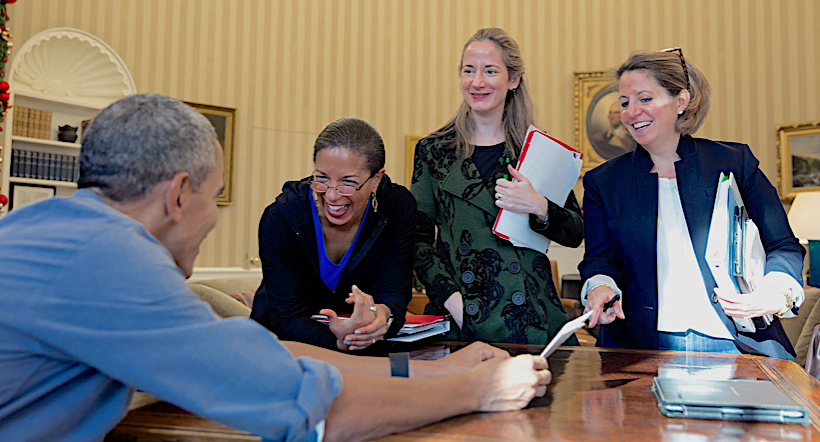 By Medea Benjamin  and Marcy Winograd
World BEYOND War

Even before President-Elect Joe Biden sets foot in the White House, the Senate Intelligence Committee may start hearings on his nomination of Avril Haines as director of national Intelligence.

President Barack Obama’s top lawyer on the National Security Council from 2010 to 2013 followed by CIA deputy director from 2013 to 2015, Haines is the proverbial wolf in sheep’s clothing. She is the affable assassin who, according to Newsweek, would be summoned in the middle of the night to decide if a citizen of any country, including our own, should be incinerated in a U.S. drone strike in a distant land in the greater Middle East. Haines also played a key role in covering up the U.S. torture program, known euphemistically as “enhanced interrogation techniques,” which included repeated water boarding, sexual humiliation, sleep deprivation, dousing naked prisoners with ice cold water and rectal rehydration.

For these reasons, among others, the activist groups CODEPINK, Progressive Democrats of America, World Beyond War and Roots Action have launched a campaign calling on the Senate to reject her confirmation.

In 2015, when Haines was CIA deputy director, CIA agents illegally hacked the computers of the Senate Intelligence Committee to thwart the committee’s investigation into the spy agency’s detention and interrogation program. Haines overruled the CIA’s own inspector general in failing to discipline the CIA agents who violated the U.S. Constitution’s separation of powers. According to former CIA whistleblower John Kiriakou, she not only shielded the hackers from accountability but even awarded them the Career Intelligence Medal.

And there’s more. When the exhaustive 6,000-page Senate Intelligence Committee report on torture was finally complete, after five years of investigation and research, Haines took charge of redacting it to deny the public’s right to know its full details, reducing the document to a 500-page, black-ink-smeared summary. 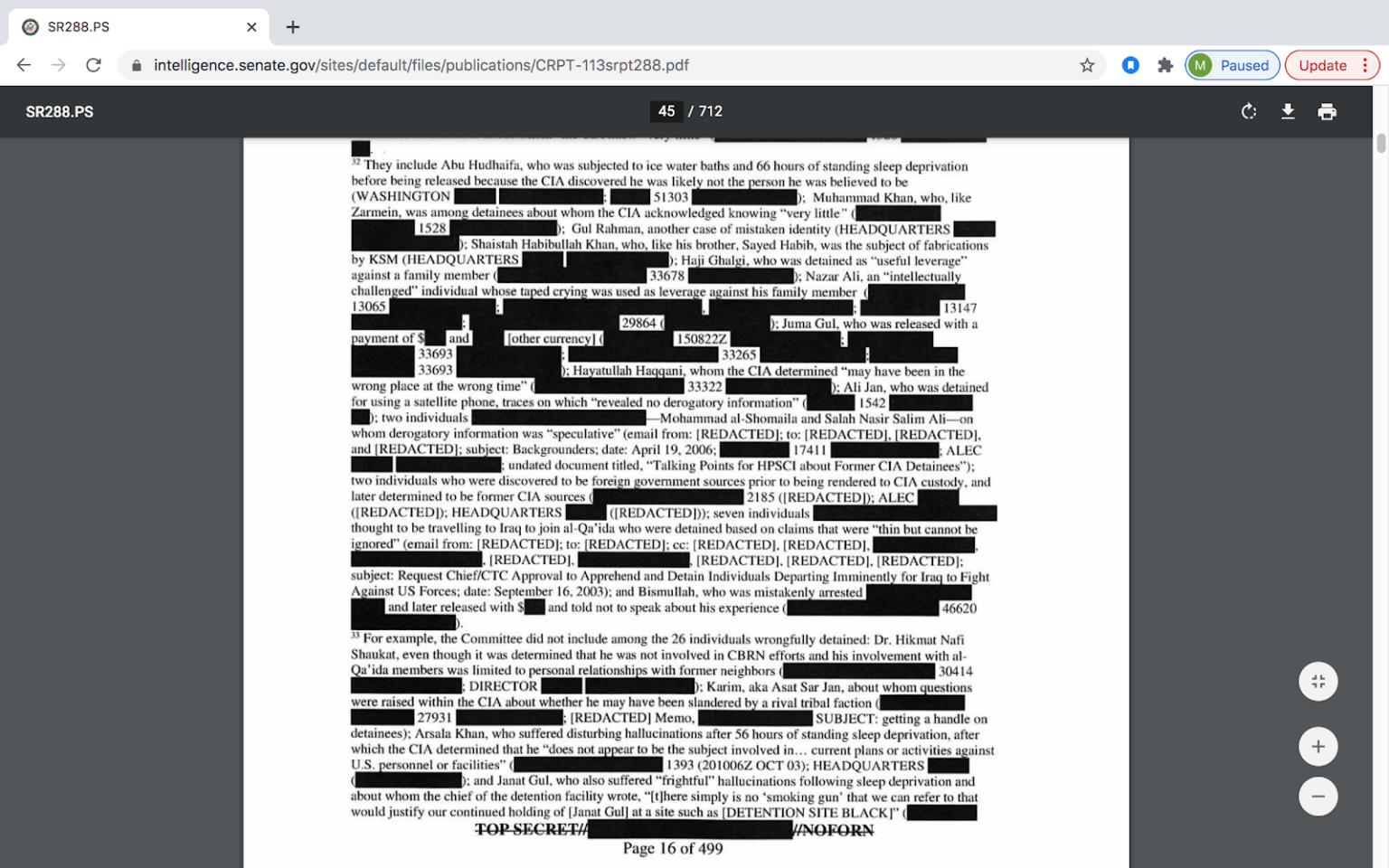 This censorship went beyond merely “protecting sources and methods.” It avoided CIA embarrassment, while ensuring her own career advancement.

“Haines has an unfortunate record of repeatedly covering up for torture and torturers. Her push for maximalist redactions of the torture report, her refusal to discipline the CIA personnel who hacked the Senate and her vociferous support for Gina Haspel — which was even touted by the Trump White House as Democrats stood in nearly unanimous opposition to the then-nominee to lead the CIA — should be interrogated during the confirmation process.”

This sentiment was echoed by Mark Udall, a Democratic senator on the intelligence committee when it finished the torture report.

“If our country is going to turn the page on the dark chapter of our history that was the CIA’s torture program, we need to stop nominating and confirming individuals who led this terrible program and helped cover it up.”

Another reason Haines’s nomination should be rejected is her support for the proliferation of killer drones. There has been a concerted effort by former Obama colleagues to paint Haines as a voice of restraint who tried to pro­tect­ civil­ians. But according to former CIA whistleblower John Kiarikou, Haines regularly approved the drone bombings that killed not only suspected terrorists, but entire families, including children, who died as collateral damage.” It was Avril who decided whether it was legal to “incinerate someone from the sky,” said Kiriakou.

“The unassuming spy  … enabled murder by remote control and wielded a thick black pen to cover up CIA torture.”

When human rights groups denounced Obama’s rash use of extrajudicial killings, including the assumption that all military-age males in the strike zone were “enemy combatants” and therefore legitimate targets, Haines was enlisted to co-author a new “pres­i­den­tial pol­i­cy guid­ance” to tighten the regulations. But this new “guidance,” issued on May 22, 2013, continued to blur the line between civilians and combatants, nor­mal­izing tar­get­ed assas­si­na­tions and effectively repudiating the “presumption of innocence” that has been the bedrock principle of civilian law for over 800 years.

The drone playbook, “PROCEDURES FOR APPROVING DIRECT ACTION AGAINST TERRORIST TARGETS LOCATED OUTSIDE THE UNITED STATES AND AREAS OF ACTIVE HOSTILITIES,” says on page 1 that any “direct action must be conducted lawfully and taken against lawful targets,” yet the guidelines never reference international or domestic laws that define when extrajudicial killings outside of an active war zone are permitted.

On page 4, the guidelines for drone strikes allow for lethal action against those who are not “high value targets,” without explaining the criteria the CIA would use to identify someone as an imminent threat to the security of the United States. On page 12, the co-authors, Haines among them, redacted the minimum profile requirements for an individual “nominated” for lethal action. The very term “nominated” suggests an effort to sugarcoat targeted assassination, as though the bombing target is recommended for a U.S. presidential cabinet position. [NOTE: You might (somewhat sarcastically) want to put “[sic]” after the first use of the word “nominated”] 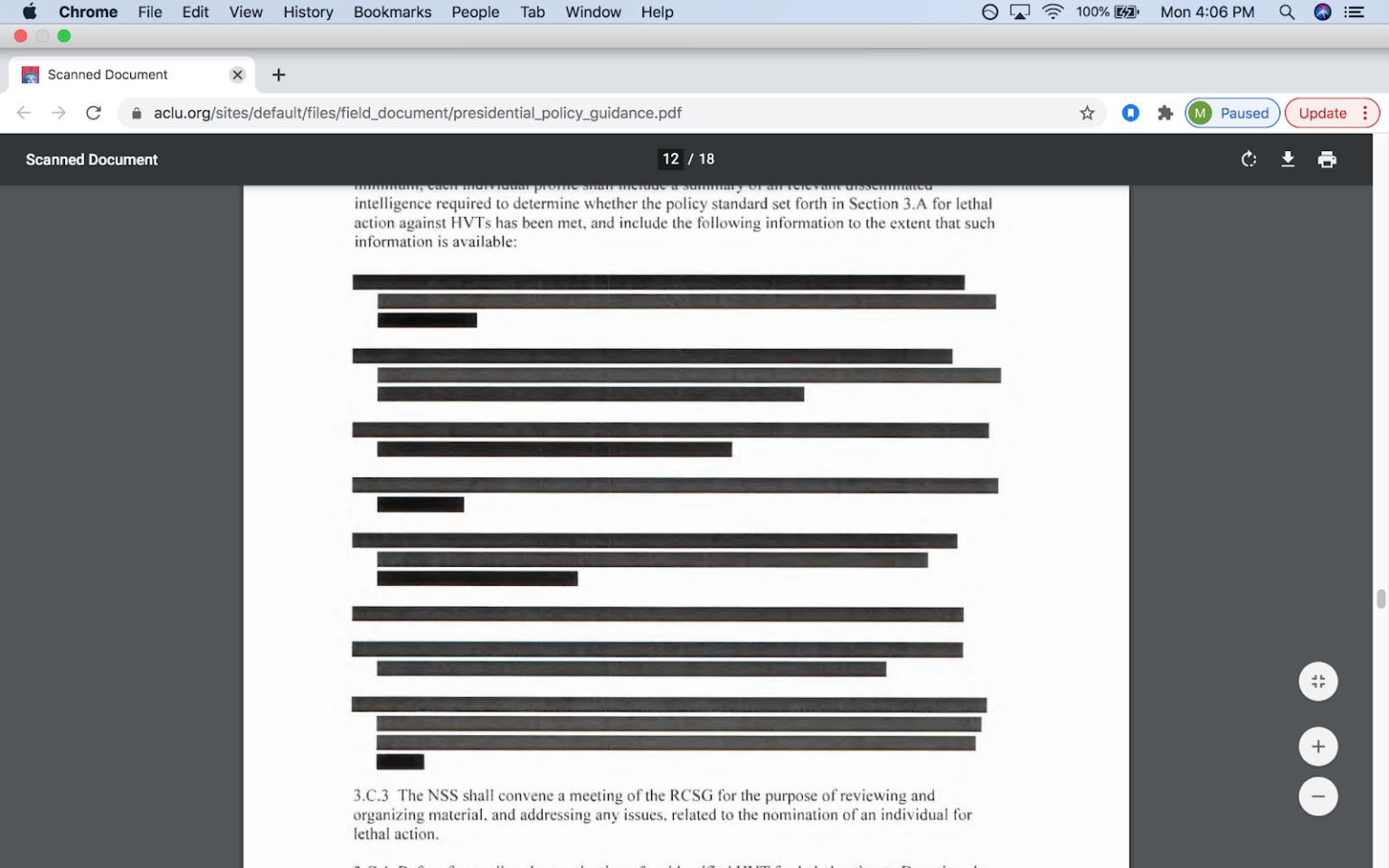 Moreover, the guidelines themselves were often totally disregarded. The policy states, for example, that the U.S. “prioritizes, as a matter of policy, the capture of terrorist suspects as a preferred option over lethal action” and that lethal action should be taken “only when capture of an individual is not feasible.” But the Obama administration did nothing of the sort. Under President George W. Bush, at least 780 terrorist suspects were captured and thrown into the U.S.-run gulag in Guantanamo. Haines’ guidelines prohibit transfer to Guantanamo so, instead, suspects were simply incinerated.

The guidelines required “near certainty that non-combatants will not be killed or injured,” but this requirement was routinely violated, as documented by the Bureau of Investigative Journalism.

Haines’s policy guidance also states that the U.S. would respect other states’ sovereignty, only undertaking lethal action when other governments “cannot or will not” address a threat to the U.S. This, too, became simply empty words on paper. The U.S. barely even consulted with the governments in whose territory it was dropping bombs and, in the case of Pakistan, openly defied the government.

In December 2013, the National Assembly of Pakistan unanimously approved a resolution against U.S. drone strikes in Pakistan, calling them a violation of “the charter of the United Nations, international laws and humanitarian norms” and Pakistan’s former Prime Minister Nawaz Sharif stated:

“The use of drones is not only a continual violation of our territorial integrity but also detrimental to our resolve and efforts at eliminating terrorism from our country.”

But the U.S. ignored the pleas of Pakistan’s elected government. 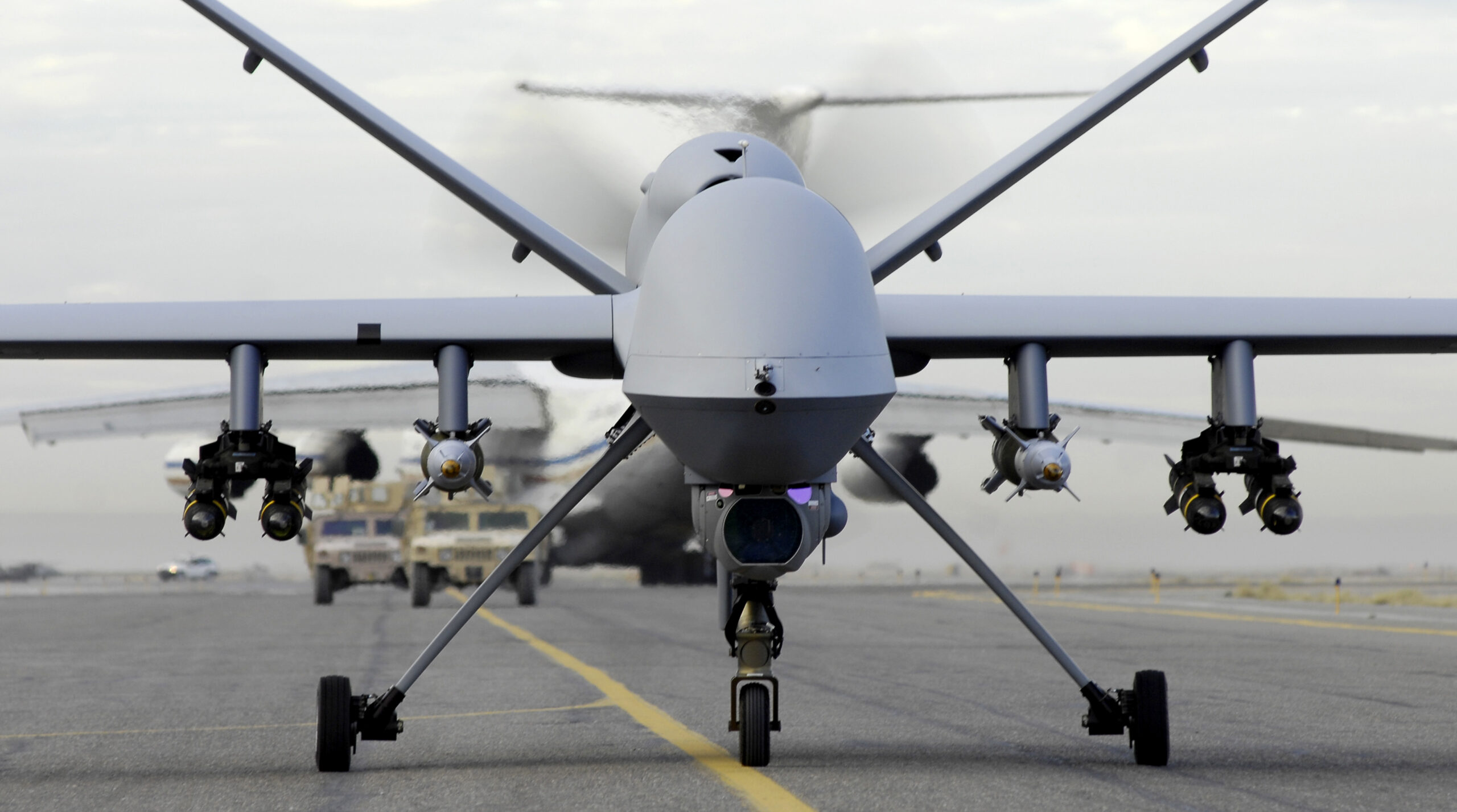 The proliferation of drone killings under Obama, from Yemen to Somalia, also violated U.S. law, which gives Congress the sole authority to authorize military conflict. But Obama’s legal team, which included Haines, circumvented the law by insisting that these military interventions fell under the 2001 Authorization for the Use of Military Force (AUMF), the law Congress passed to target Afghanistan in the wake of the 9/11 attacks. This specious argument provided fodder for the out-of-control misuse of that 2001 AUMF which, according to the Congressional Research Service, has been relied on to justify U.S. military action at least 41 times in 19 countries.

In addition, the guidelines don’t even require the CIA and other agencies participating in the drone program to notify the president, the commander-in-chief, as to who is to be killed in a drone strike, except when a targeted individual is a U.S. citizen or when the agencies in charge cannot agree on the target.

There are many other reasons to reject Haines. She advocates intensifying crippling economic sanctions on North Korea that undermine a negotiated peace, and “regime change”—hypothetically engineered by a U.S. ally — that could leave a collapsed North Korea vulnerable to terrorist theft of its nuclear material; she was a consultant at WestExec Advisors, a firm that exploits insider government connections to help companies secure plum Pentagon contracts; and she was a consultant with Palantir, a data-mining company that facilitated Trump’s mass deportations of immigrants.

But Haines’ record on torture and drones, alone, should be enough for senators to reject her nomination. The unassuming spy — who got her start at the White House as a legal adviser in the Bush State Department in 2003, the year the U.S. invaded Iraq—might look and sound more like your favorite college professor than someone who enabled murder by remote control or wielded a thick black pen to cover up CIA torture, but a clear examination of her past should convince the Senate that Haines is unfit for high office in an administration that promises to restore transparency, integrity, and respect for international law.

Tell your senator: Vote NO on Haines.

Marcy Winograd of Progressive Democrats of America served as a 2020 DNC Delegate for Bernie Sanders and co-founded the Progressive Caucus of the California Democratic Party. Coordinator of CODEPINKCONGRESS, Marcy spearheads Capitol Hill calling parties to mobilize co-sponsors and votes for peace and foreign policy legislation. Follow her on Twitter: @marcywinogrand

This article is from World BEYOND War.

← JOHN KIRIAKOU: The Dark Past of Biden’s Nominee for National Intelligence Director
The ICC’s Indefensible Decision on Alleged UK War Crimes in Iraq →

6 comments for “The Trouble With Avril Haines for Intelligence”