While illegal deforestation is not new, there is no moment in history that has attracted as much attention to it as now — or generated so much alarm, writes Adriana Erthal Abdenur. 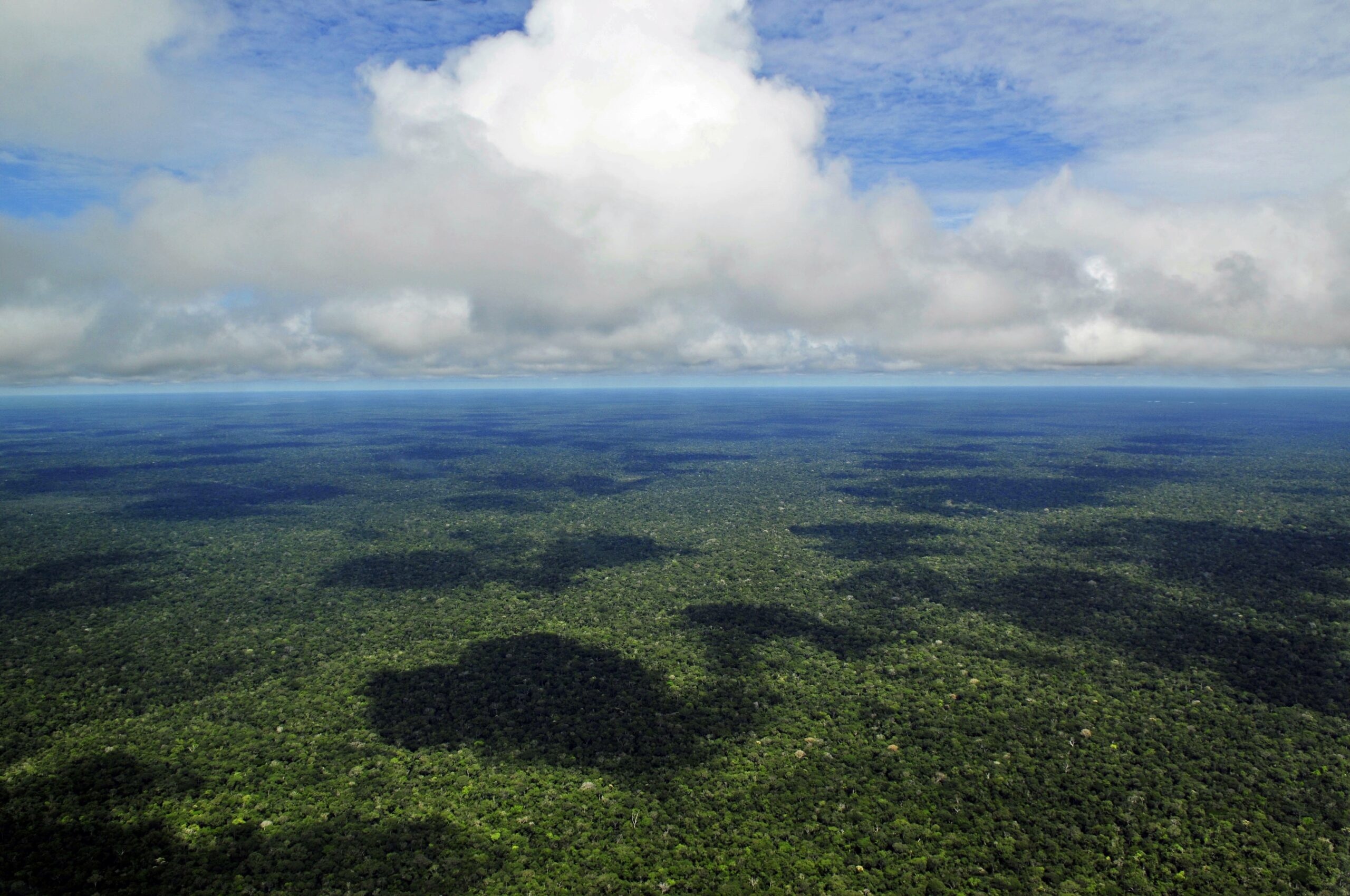 Illegal deforestation has become a defining problem of our time, but its place in global governance remains piecemeal. Just a few months ago, the idea of an international agreement on forests would have been unthinkable because of the spread of climate denialism and nationalist populism. But the winds of geopolitical change have blown open a new opportunity.

It is time to create a global treaty to protect forests — one with meaningful involvement from a wide range of parties. And with legal force.

While illegal deforestation is not new, there is no moment in history that has attracted as much attention to it as now — or generated so much alarm. From 2015 to 2020, the global rate of deforestation was estimated to be 10 million hectares, or about 25 million acres, a year. The area of primary forest worldwide has decreased by more than 80 million hectares, or 198 million acres, since 1990. Destruction of heavily forested spaces, which contain 80 percent of all biodiversity on the planet, accounts for 10 percent of all global greenhouse gas emissions.

But these climate and environmental threats represent only part of the problem. The clearing of trees sustains organized environmental crime, including transnational networks that drive unlawful deforestation through illegal land invasions for agriculture and ranching, human-made forest fires, illegal wood extraction, illegal mining and wildlife trafficking, to name only some of the transgressions.

Deforestation tends to leave not only massive environmental destruction in its wake but also poverty, the end of traditional livelihoods and rampant violence. It is no coincidence that deforestation hot spots are home to some of the highest homicide rates on the planet. Deforestation brings about enormous human suffering, as well as enormous economic losses, to the tune of $5 trillion annually. Equally important, tree clearing and extinctions actually make pandemics more likely to occur. 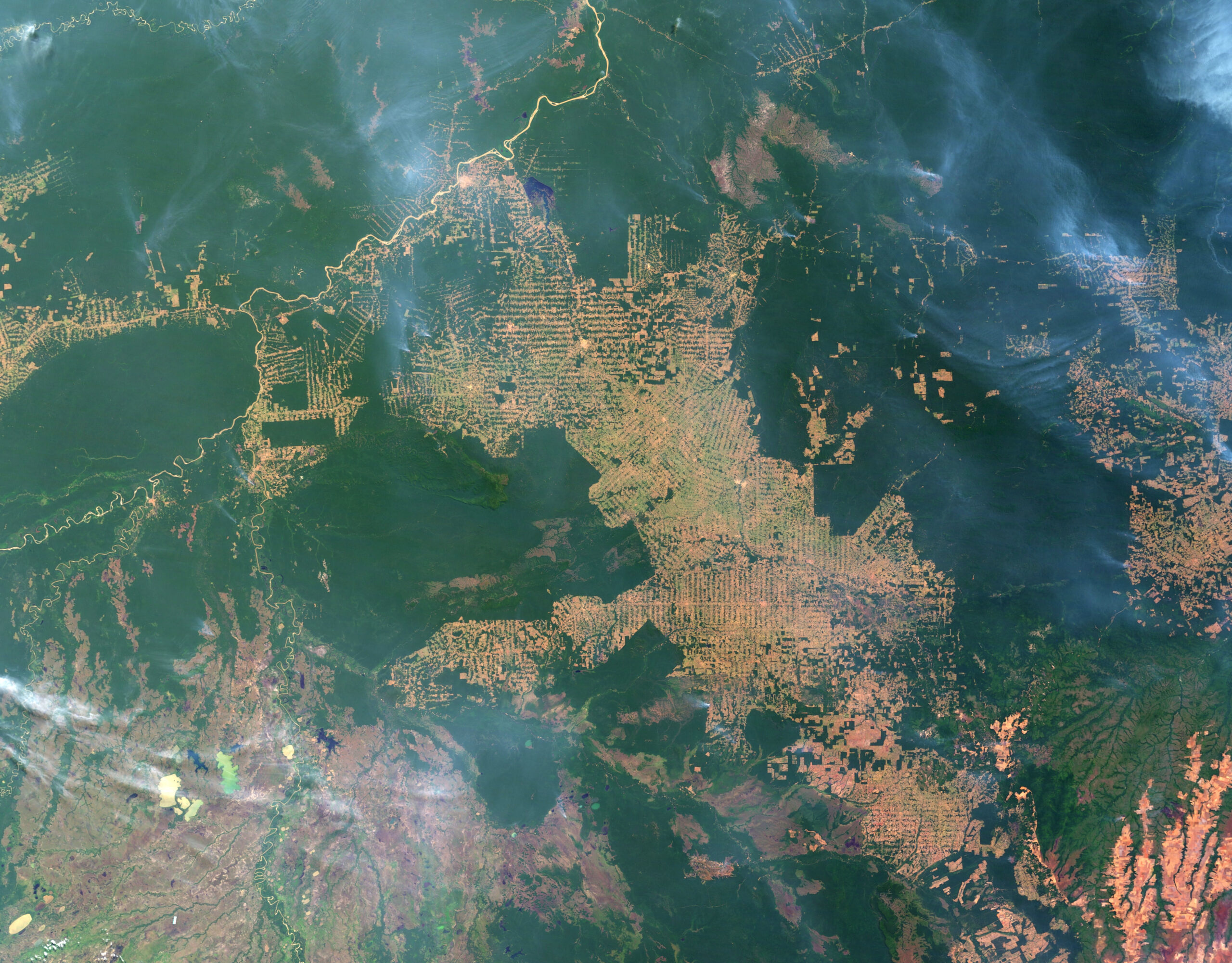 Fires and deforestation in the state of Rondônia, Brazil. Intact forest is deep green; cleared areas are tan  or light green. The fish bone pattern of small clearings along new roads is the beginning of one of the common deforestation trajectories in the Amazon.  (Jesse Allen and Robert Simmon, NASA Earth Observatory)

While some of these damaging socioenvironmental effects are felt locally, particularly by indigenous groups and other traditional people who live in the forest, their reach extends to all continents. In addition to helping to regulate climate, forests are sources of water and food security for much broader geographies. The transnational effects mean that cities and communities far from rain forests also suffer the consequences of distant deforestation.

For instance, studies have shown that in the mid-2010s, deforestation in the Amazon contributed to a severe drought in São Paulo, a city of some 12 million people thousands of kilometers away, because the “flying rivers,” clouds carrying moisture from the rain forest, were interrupted. In many cases, deforestation impacts cross-international borders.

In the Congo Basin, deforestation of wood for fuel threatens food and water supplies across Africa. The proceeds from environmental crimes committed in the forests of Southeast Asia and Latin America, from illegal wood extraction to illegally mined gold to money laundering, often cross not only borders with neighboring countries but also even oceans, ending up in Europe and elsewhere.

While national and subnational players are working on the front line to curb and reverse deforestation, international cooperation at the highest level, with binding commitments, is also needed. 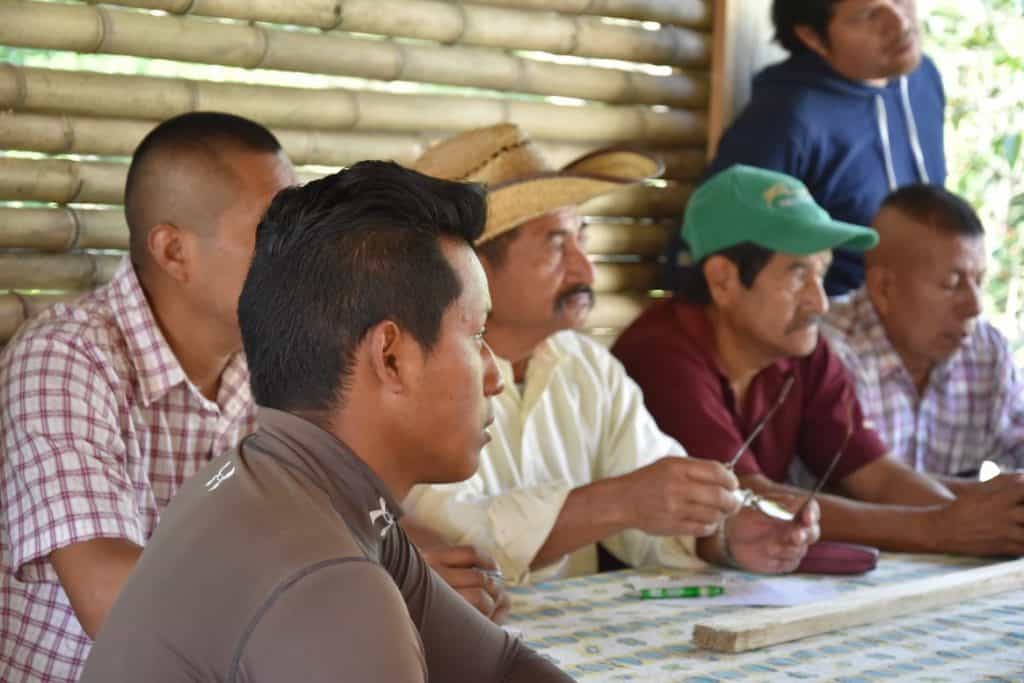 There are precedents for such cooperation. The Forest Principles, a somewhat vague statement produced at the 1992 Rio Conference, paved the way for more institutionalized arrangements, such as the Intergovernmental Forum on Forests, which lasted from 1997 to 2000, and the UN Forum on Forests, launched in 2000 to support member states with capacity development.

There are also regional arrangements, such as the Amazon Treaty Cooperation Organization, or ATCO, which — despite spurring a detailed framework regional environmental protection — has been unable to yield concrete results.

In addition, at least 12 environmental and climate conventions address deforestation to some extent. They include the Paris Agreement, the Convention on Biological Diversity, the Desertification Convention and the Indigenous and Tribal Peoples Convention. Such instruments recognize the importance of forests and provide incentives, such as REDD+ (reducing emissions from deforestation and forest degradation).

However, each governance model comes with pros and cons. When there is significant resistance to an agenda, generally a trade-off has to be made between attaining universality among UN member states and achieving enforceable norms. Since the Kyoto Protocol, interstate agreements on climate issues have been non-binding.

The lack of a legally binding global instrument to protect forests has left some biomes highly vulnerable to land invasions, forest fires and predatory extractive processes, especially in countries where leaders deny climate change and view the forest as an obstacle to development. In those settings, excessively rigid discourses of national sovereignty, aimed at undermining international cooperation, can flourish.

Forests also remain subject to predatory practices by multinational corporations that ignore environmental standards, even when the standards are high in their own home countries.

While the idea of a legally binding global instrument for forests failed to gain traction in the last 30 years, the idea is now ripe for action. Despite the reversals to the Paris Agreement — including the United States’ withdrawal process begun by President Donald Trump this fall, bandwagoning by aligned governments such as Brazil and noncompliance by countries on mitigation and adaptation commitments — we have reached a turning point in global climate politics. 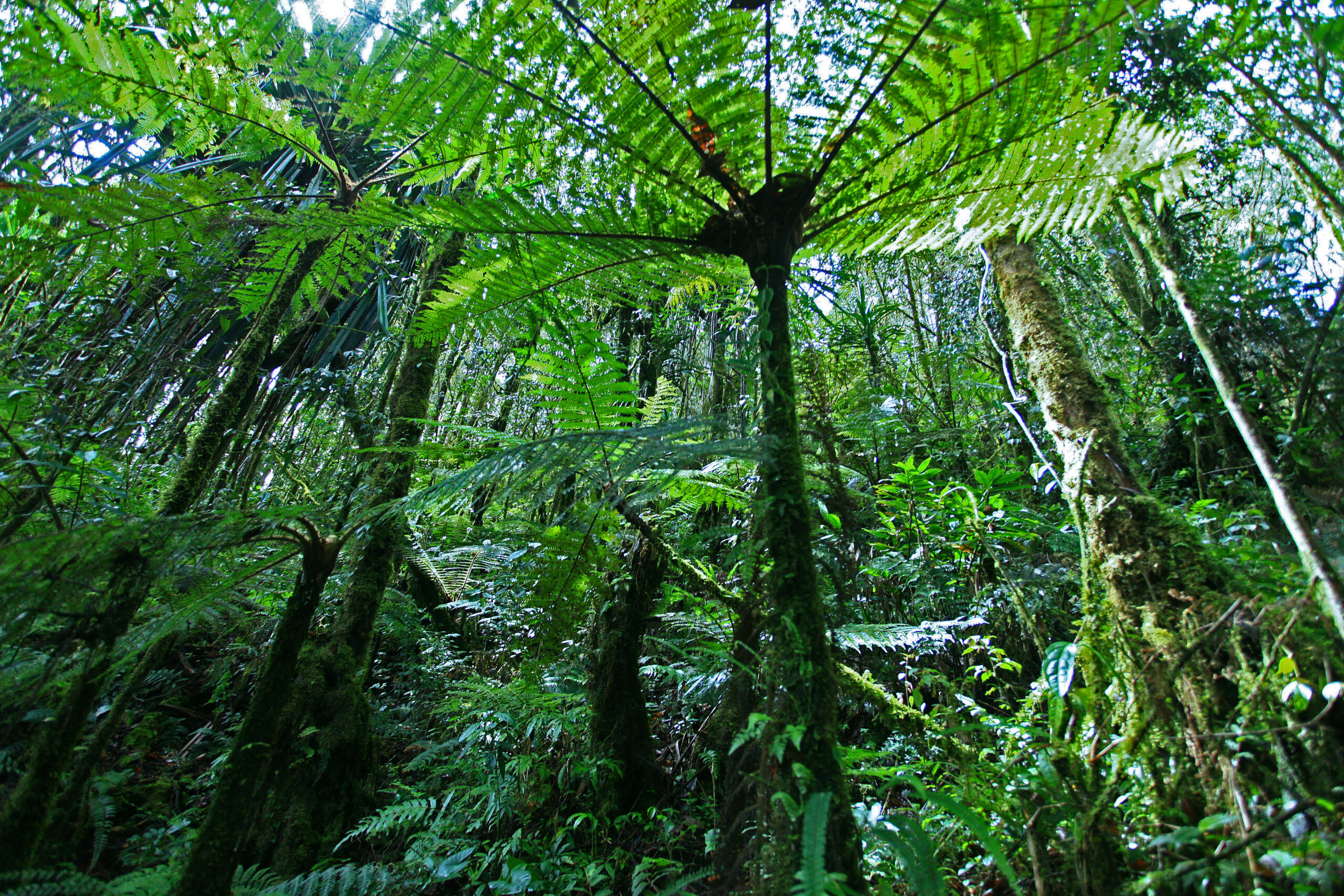 First, the climate agenda, including the green transition, has leaped to the top of agendas in Europe, the U.S. (beyond the federal government), Britain and China. New Zealand has officially acknowledged the climate emergency. A growing array of countries — Sweden, Britain, France, Denmark, New Zealand, Hungary, China, Japan and South Korea — have announced ambitious yet feasible goals for carbon neutrality by midcentury, as has the European Union.

Major gaps and blind spots remain in some of these net-zero plans, such as uncertainty about the extraterritorial emissions. But if the “race to net zero” keeps its momentum, especially with the announced return of the U.S. to the Paris Agreement, other countries may adopt similar stances.

Second, many other developing countries, including those with heavily forested areas, are innovating on the climate front: Peru has recently established its first specialized court, Costa Rica is mainstreaming sustainable development practices and Senegal has been leading the ambitious transnational Green Wall tree-planting initiative. Small Island Developing Countries (SIDs) are major voices on global climate justice.

Even in climate-skeptic governments, such as Brazil, state and municipalities have launched climate initiatives, underscoring their alignment with the Sustainable Development Goals. Finally, there is growing pressure from citizens and consumer groups who realize that what happens in forests affects them and their communities directly, regardless of where they live.

Whereas just two years ago it would have been difficult to find enough champions for a global forest initiative, it is now possible to rally strong support among developing, middle-income and rich countries to trigger a “norms cascade” for a forest treaty.

This is why loose arrangements, such as the Alliance for Rainforests — an open consortium of countries, established in 2020 by France to help protect tropical forests and to bring donor countries and major forest countries into the plan — provide yet another basis for widespread backing for a major intergovernmental venture.

However, a traditional treaty model will not suffice. Multiparty engagement, including effective follow-up processes and independent monitoring of the agreement, will be needed. While countries are sine qua non actors in fighting against illegal deforestation, there is plenty of evidence that without involvement of the private sector, civil society and subnational governments, curbing illegal deforestation remains almost useless.

For example, when Brazil significantly reduced deforestation rates even as it increased agribusiness productivity from 2004 to 2014 — showing that the two are not mutually exclusive — it did so largely because of cross-sector collaboration.

In addition, such a treaty should emphasize the relevance of forests to a wide range of countries and include ways to overcome the South-North divide that has often hampered climate negotiations. Such a treaty, for instance, would address not only the need to curb illegal deforestation but also the need for restoring forests, even in places that were cleared long ago.

Additionally, specific mechanisms for cooperation and innovative financing should be made available, and exchanges should feature ample technology transfer and payments for environmental services.

The components for a forest treaty with broad, serious geopolitical engagement already exist. Now is the time to bring them all together.

Adriana Erthal Abdenur is the executive director of lataforma CIPÓ, a Brazil-based, women-led institute dedicated to issues of climate, governance and peace.

← Judgement Day for Julian Assange is January 4. Here’s How You Can Help Us Cover It.
Our Distance from Dirt →