A new law in Uttar Pradesh adds to the attack on the country’s core values of secularism and pluralism, Betwa Sharma reports. 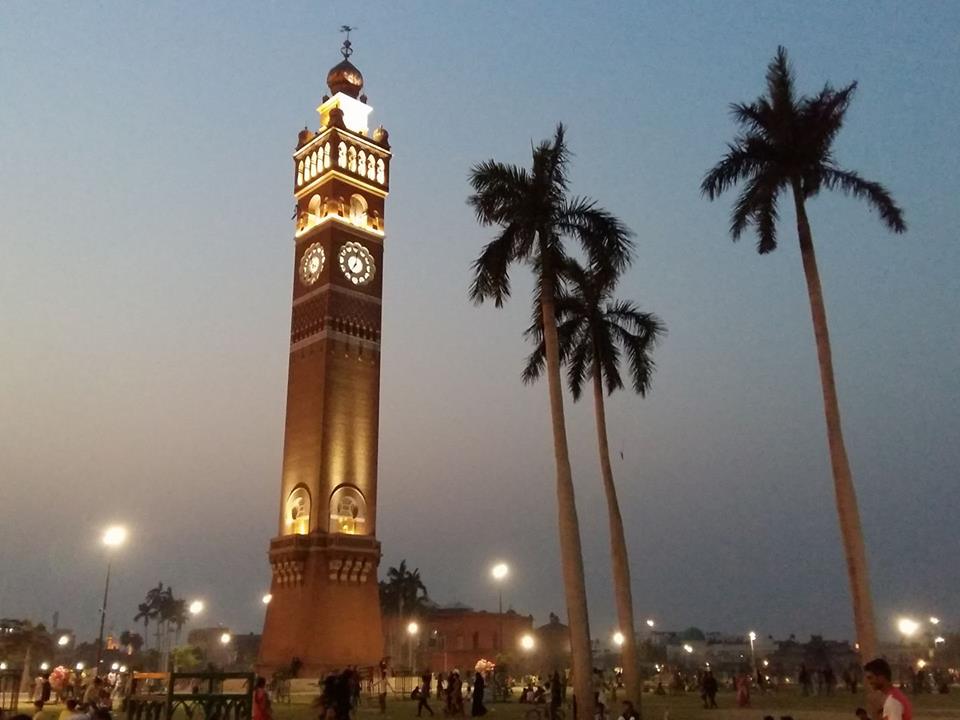 The Indian state of Uttar Pradesh (UP) has passed a law against a baseless conspiracy theory called “love jihad,” which claims Muslim men are attempting to change India’s demography by enticing Hindu women and converting them to Islam through marriage.

The new law exposes interfaith couples and makes it much harder for them to get married in a society where families and even the local constabulary resort to threats and violence to stop intercaste and interfaith marriages.

The law violates fundamental constitutional rights of life and liberty, privacy, religious freedom and equality. It further poisons a country where religious polarisation brought on by the Hindu nationalist government of the Bharatiya Janata Party (BJP), which has roots in an Indian fascist movement from the 1920s, has already made people far less invested in India’s core values of secularism and pluralism.

The law comes amid continuing tension between Hindus and Muslims following riots in late February, stoked by the BJP central  government, that left more than 40 people dead in Delhi.

Even though the new law violates rights guaranteed in the Indian Constitution, at least three other states ruled by the  BJP are planning to bring similar laws to fight the bogeyman of “love jihad.” 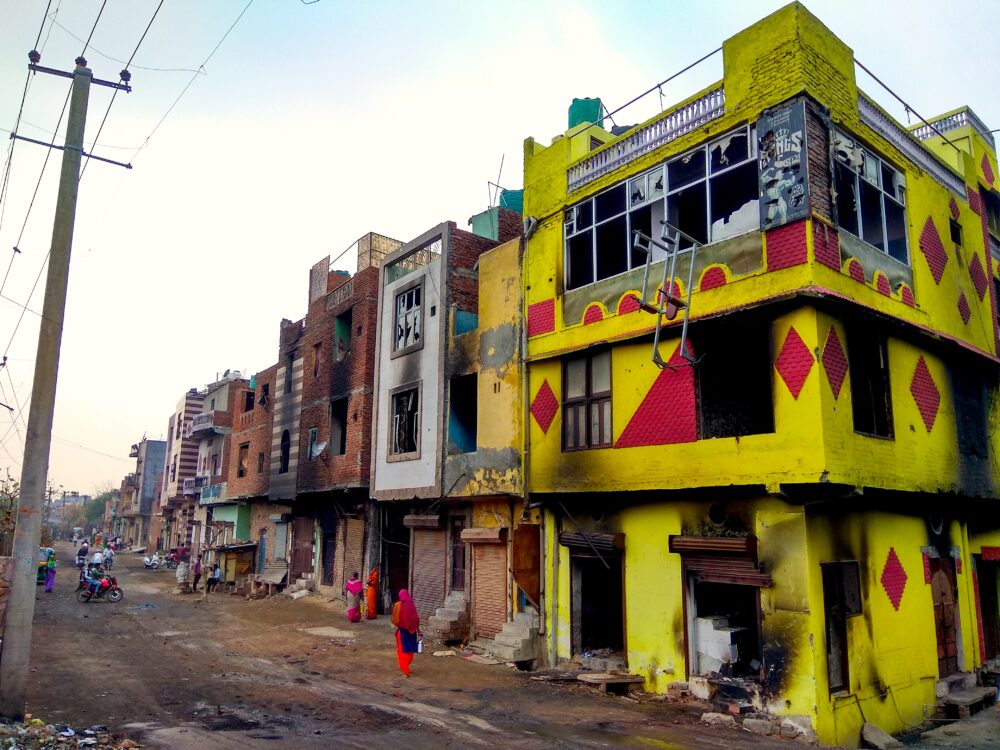 Uwais Ahmed, a 21-year-old Muslim man, was the first person to be arrested under the new law on Wednesday. The complainant is the father of the Hindu woman who Ahmed allegedly tried to convert to Islam. She married someone else earlier this year.

It also came even after the BJP central government told Parliament that “love jihad” has no meaning in Indian law and no cases have been reported by any central agency. A probe carried out by the National Investigation Agency in 2018 in the southern state of Kerala found no evidence of it. A probe carried out by a Special Investigation Team in the city of Kanpur in Uttar Pradesh in November also found no evidence for it.

The BJP is the political wing of the Rashtriya Swayamsevak Sangh (RSS), a 100-year-old Hindu nationalist organization, whose ideologues were infamously motivated by Nazism and fascism in Italy. Recent laws like the Citizenship Amendment Act (CAA), which makes religion the basis of granting Indian citizenship, and UP’s “love jihad” law, have been  compared to Nazi Germany’s Nuremberg Laws that stripped Jews of German citizenship, and banned marriages between Jews and non-Jewish Germans.

Six years ago, in the national election in which Prime Minister Narendra Modi swept to power in India, Hindu nationalist leaders injected the term “love jihad” into India’s political discourse. While there were those who laughed at the absurdity of the claim, and others who found it dangerous, it was hard to imagine that it would be the trigger for an anti-conversion law in India’s most populous state, home to 200 million people, 19 percent of them Muslim. 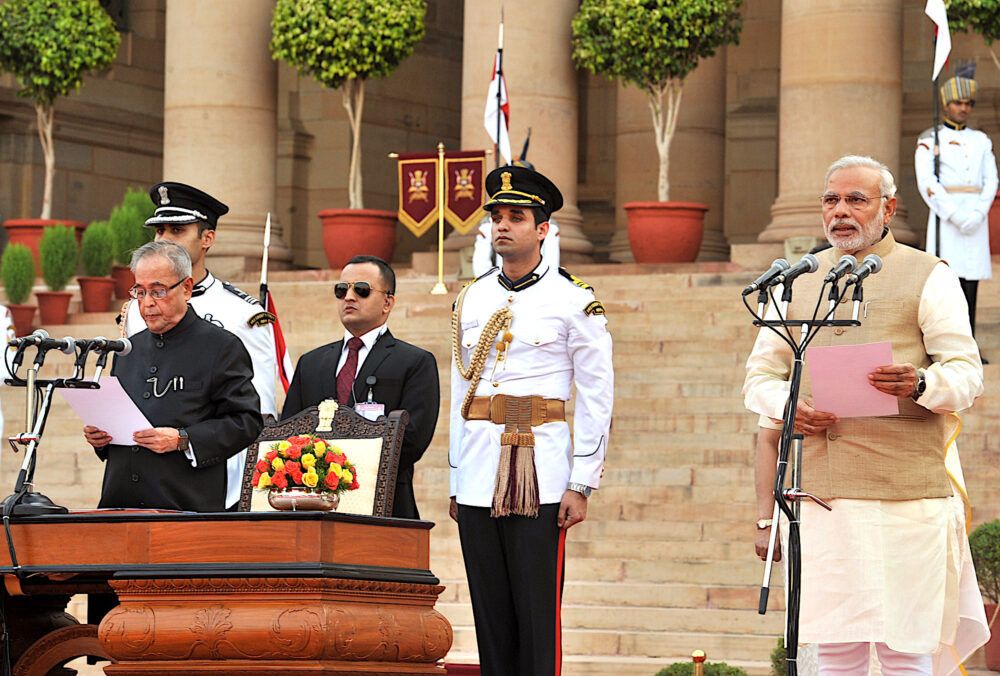 Narendra Modi takes oath of office as prime minister of India in New Delhi on May 26, 2014.
( Government of India, Wikimedia Commons)

Yogi Adityanath, the firebrand Hindu nationalist who became the chief minister of UP in 2017, has been speaking about “love jihad” for many years. Adityanath, who wears the saffron robes of a Hindu holy man, ran a rightwing outfit that claimed to be fighting this imaginary conspiracy in the eastern part of the state.

When Adityanath came to power three years ago, the outfit moved to western UP and, together with the newly formed “anti-Romeo squads” of the UP police, harassed and shamed young couples.

On Oct. 31, Adityanath said that posters of those indulging in “love jihad” would be put up on roads, and promised a law to fight it.

In India, people from two faiths can marry under the Special Marriage Act of 1954, without changing their religion, but the legal inquiry carried out by the police is a gruelling affair, with hostile family members raising objections and rightwing goons making trouble to prevent the marriages.

The Uttar Pradesh Prohibition of Unlawful Conversion of Religion Ordinance of 2020 does not use the term “love jihad,” but it outlaws interfaith marriages that are done with the sole purpose of changing a woman’s religion. It bars conversion before and after marriage. The punishment is up to 10 years in prison, and a fine of Rs 25,000 ($340).

The law says that anyone who wants to change their religion has to submit a declaration to a local official called the District Magistrate (DM), stating that the impending conversion is by free will, and the DM has two months to carry out an investigation into the “real intention, purpose and cause of the proposed religious conversion.” 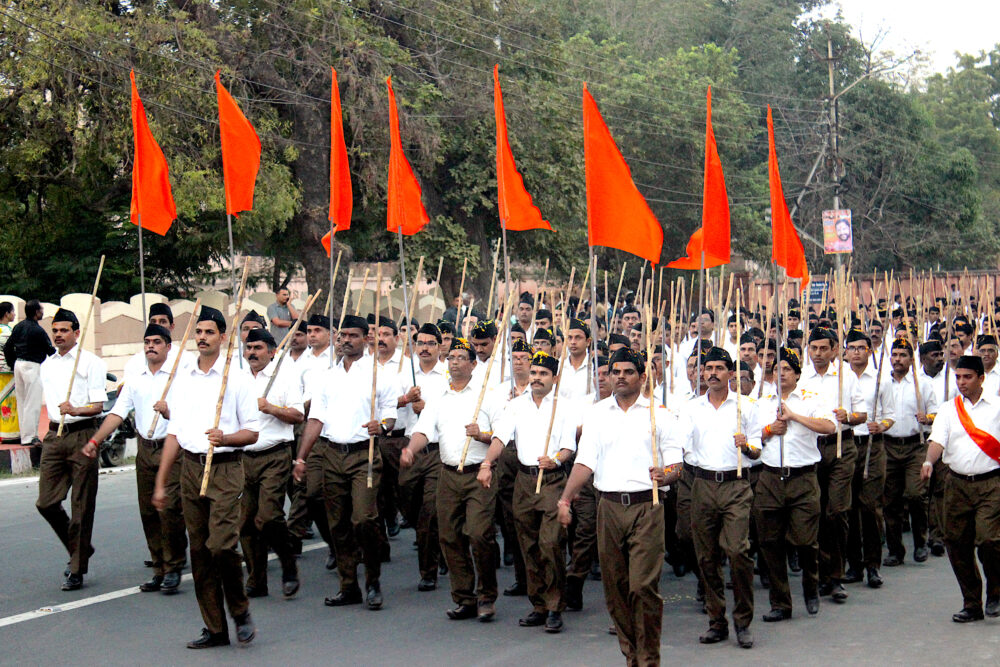 While the grounds for objection are laid out in the Special Marriage Act (age, already married, a partner is not of sound mind), the new Uttar Pradesh law says nothing about grounds for objection. In India, where parents routinely object to inter-caste and interfaith marriages, there is tremendous scope for abusing such an open-ended statute.

In a gross invasion of the right to privacy, the new law also authorises the district magistrate to exhibit a copy of the declaration of conversion, containing the personal details of the person who has converted, on a noticeboard in his office.

“This is an atrocious law,” said Faizan Mustafa, a law professor and vice chancellor of NALSAR University of Law, Hyderabad.

“With the overwhelming support that BJP has, what is the reason for this regressive agenda? That is not clear to me,”  Mustafa told Consortium News. “Unless, the support is only for that agenda. Why do you need to pass such a law when your support and vote base is increasing? In any case, legally speaking, it violates personal freedom.”

Mustafa said the Supreme Court needs to review its position on religious conversions in light of the right to privacy, which became fundamental in 2017. “That judgment was given in an age when fundamental rights were not liberalized,” he said. “Whom you marry, whom you follow, whom you denounce and again you follow, is no more the business of the state. There is no compelling state interest.”

On the 1977 Supreme Court judgment, the late H.M. Seervai, an eminent jurist, said, “The judgment of the Supreme Court is clearly wrong and it is productive of greatest public mischief and ought to be overruled.”

At least nine of the 29 states in India have enacted laws against conversions deemed forcible, at least two of which go back to the 1960s. These lawmakers believed that Christian missionaries were converting India’s most marginalized sections — Dalits and tribals — by giving them free medical care and education as “inducements.”

Hindu nationalist leaders see Christain missionaries as a threat and have continually fanned the theory that Christians — 2.3 percent of 1.2 billion people — will one day surpass the number of Hindus (80 percent of the population). For many Dalits, conversion can be an escape from a Hindu caste system that has enforced untouchability even after it was abolished when India became a free country. 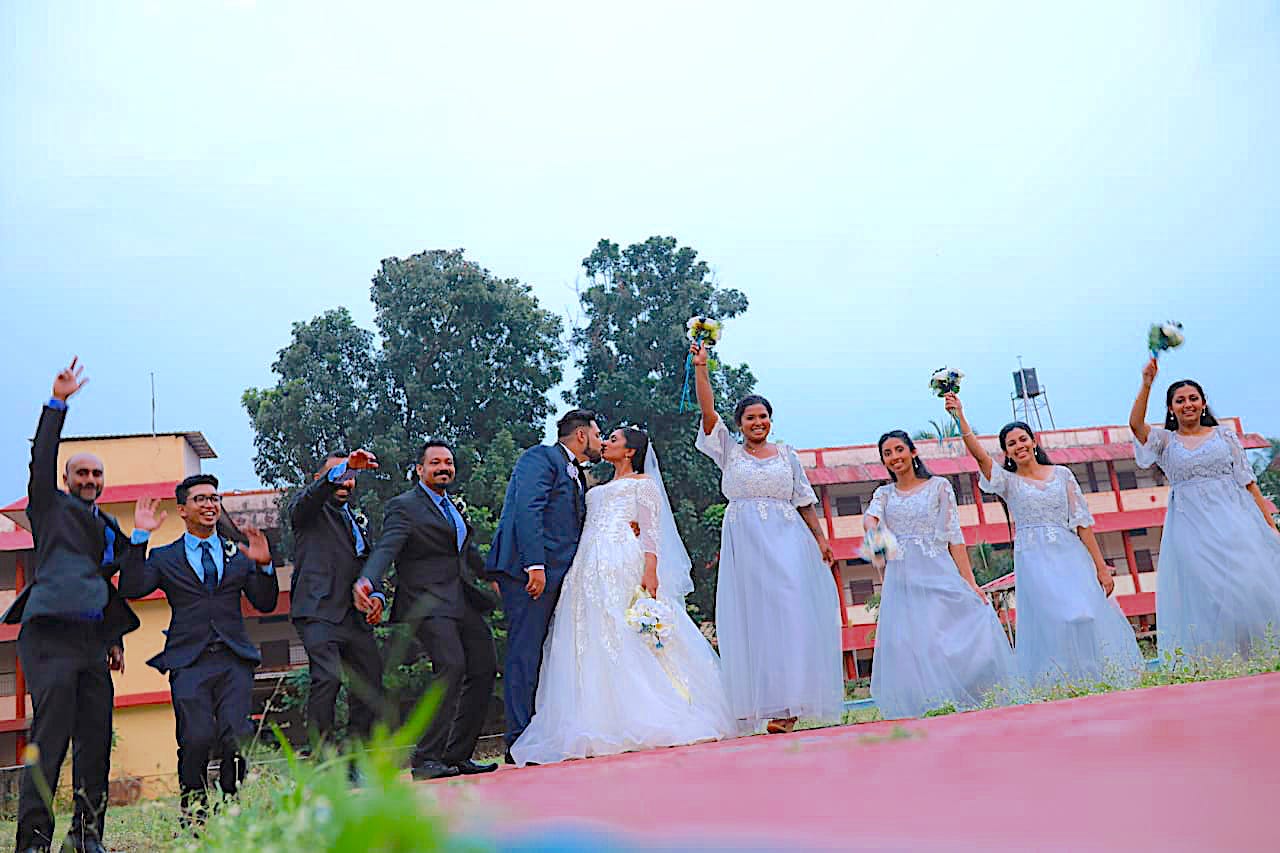 Madhya Pradesh was the second state to outlaw conversions for marriage in 1968. While UP’s inclusion of marriage in its anti-conversion law has triggered outrage, at least two other states ruled by the BJP — Uttarakhand and Himachal Pradesh — have outlawed marriage done for the sole purpose of religious conversion in the past two years.

When Himachal Pradesh passed its anti-conversion law in 2006, it was ruled by the Congress Party, the party of India’s first prime minister, Jawaharlal Nehru, and India’s first crop of secular leaders.

The Congress, which thrived for a half a century without another national party to challenge it, claims to have retained its secular credentials. But over decades, the Congress exploited India’s religious divide to win elections, passed regressive laws for cow protection, did little to stop Hindus killings Sikhs after the assassination of Indira Gandhi in 1984, and pandered to Hindu majoritarian sentiments that eventually led to the demolition of a 16th century mosque, and emboldened the BJP.

Why is UP Getting So Much Attention? 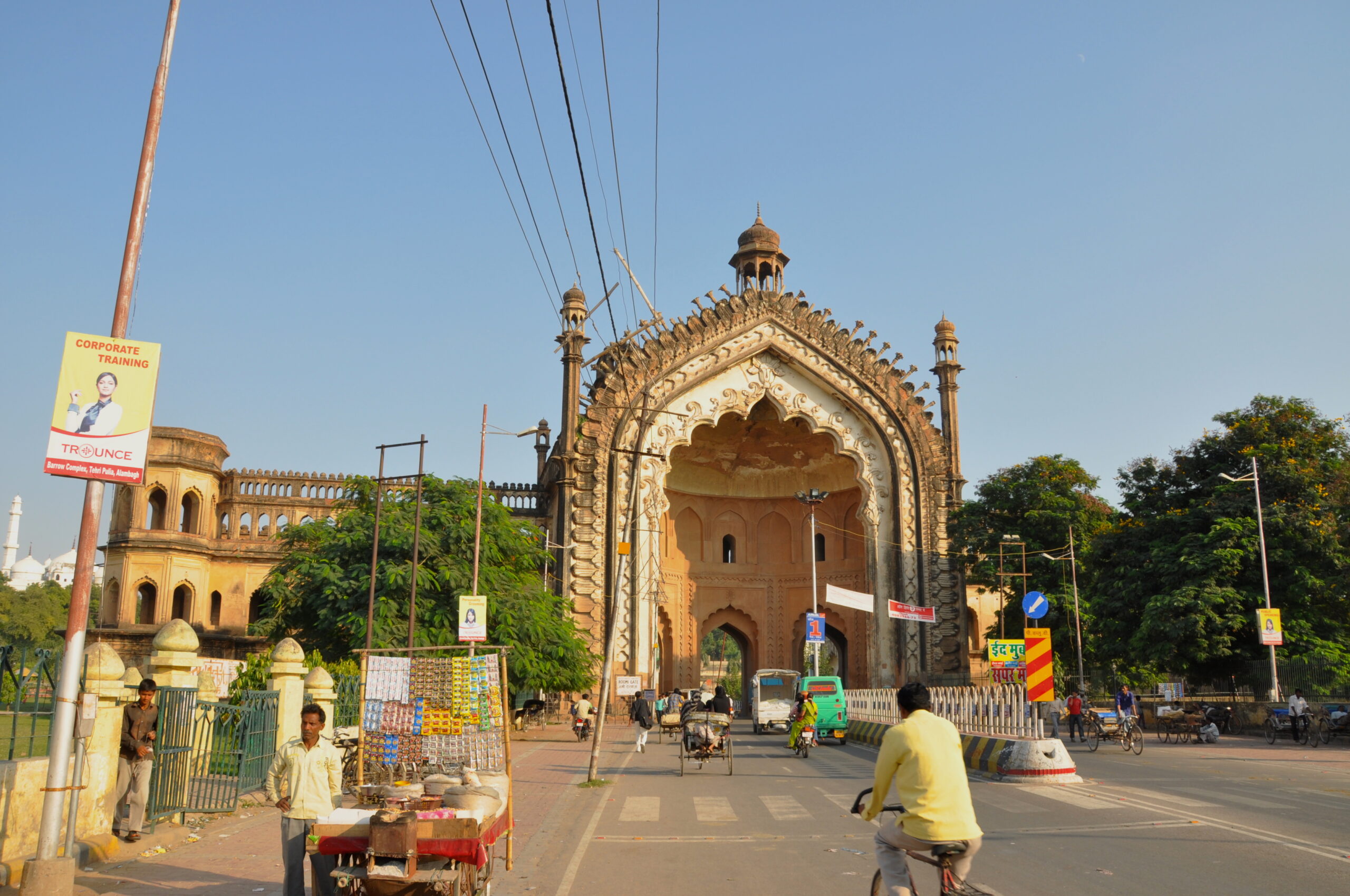 India’s most populous state is also its most politically significant. It is often said that the road to Delhi passes through Lucknow, the capital of UP. Of India’s 14 prime ministers since 1947 , nine have fought the national election from UP.

In the six years since the BJP took UP by storm in the 2014 general election and the 2017 state election, the state has recorded the highest number of atrocities against Muslims and Dalits, and the most cow-related violence.

The UP state election is due in 2022, and the recent legislation needs to be seen in light of BJP’s propensity to polarize the electorate along religious lines before any poll.

Two lawyers and a legal researcher on Thursday petitioned  the Supreme Court, challenging UP’s new law as an affront to the Indian Constitution.

The most recent judgment is by the Allahabad High Court, the highest court in Uttar Pradesh, which struck down two previous rulings that forbade conversions for the sake of getting married. Justices Pankaj Naqvi and Vivek Agarwal on Nov. 23 said invalidating these conversions was an unnecessary interference in a personal relationship and violated the right to life guaranteed under the Indian constitution.

“We do not see Priyanka Kharwar and Salamat as Hindu and Muslim, rather as two grown-up individuals who, out of their own free will and choice, are living together peacefully and happily over a year,” wrote Justice Naqvi.

But UP Chief Minister Adityanath’s cabinet went ahead and cleared the law on Nov. 24 and it was signed into law by the Uttar Pradesh governor four days later.

While its position on religious conversions might be outdated, the Supreme Court has reiterated many times that once an adult, a person can marry anyone they like.

In 2018, while reinstating the marriage in Kerala of a Hindu woman who converted to Islam and a Muslim husband, the Indian Supreme Court ruled that the choice of a marriage partner is an absolute right.

“The choice of a partner whether within or outside marriage lies within the exclusive domain of each individual … Choices of faith and belief as indeed choices in matters of marriage lie within an area where individual autonomy is supreme …Neither the state nor the law can dictate a choice of partners or limit the free ability of every person to decide on these matters.”