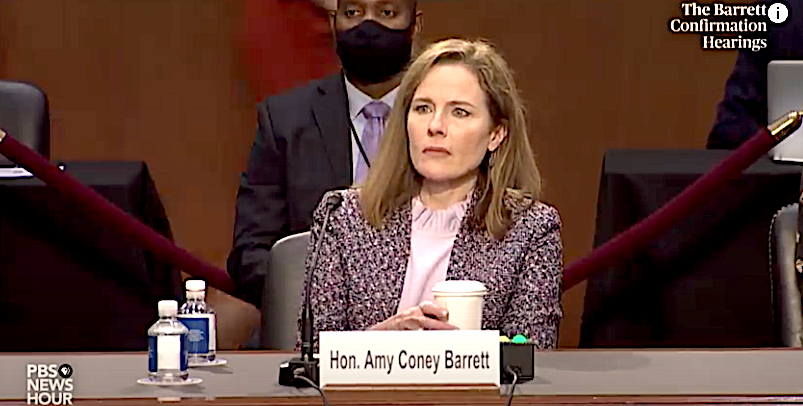 During her Supreme Court confirmation hearing before the Senate Judiciary Committee, Amy Coney Barrett refused to say that voter intimidation is illegal, that armed poll watchers are intimidating, that voter discrimination exists, whether the president could deny someone the right to vote based on race or that Congress has a constitutional duty to protect the right to vote.

She refused to affirm that Medicare is constitutional; that married couples should not lose their right to contraceptives; that a Black worker repeatedly called the N-word was subjected to a hostile work environment; that it’s wrong to separate children from their parents at the border; or that marriage equality, the right to consensual gay sex and LGBTQ workers’ rights should be protected. Barrett would not say that human beings are responsible for climate change or that the Constitution requires a peaceful transfer of power.

Barrett’s answers — and refusals to answer — confirm that she will be the most radical right-wing member of the Court.

Even Chief Justice John Roberts, who wrote the decision in Shelby County v. Holder, which struck down Section 5 of the Voting Rights Act (VRA), noted, “Voting discrimination still exists. No one doubts that.” Apparently, Barrett does. Roberts also said at his confirmation hearing, “I agree with the Griswold court’s conclusion that marital privacy extends to contraception and availability of that.”

Even Kavanaugh wrote in a court of appeals opinion that, “being called the N-word by a supervisor suffices by itself to establish a racially hostile work environment,” Sen. Cory Booker (D-New Jersey) told Barrett. 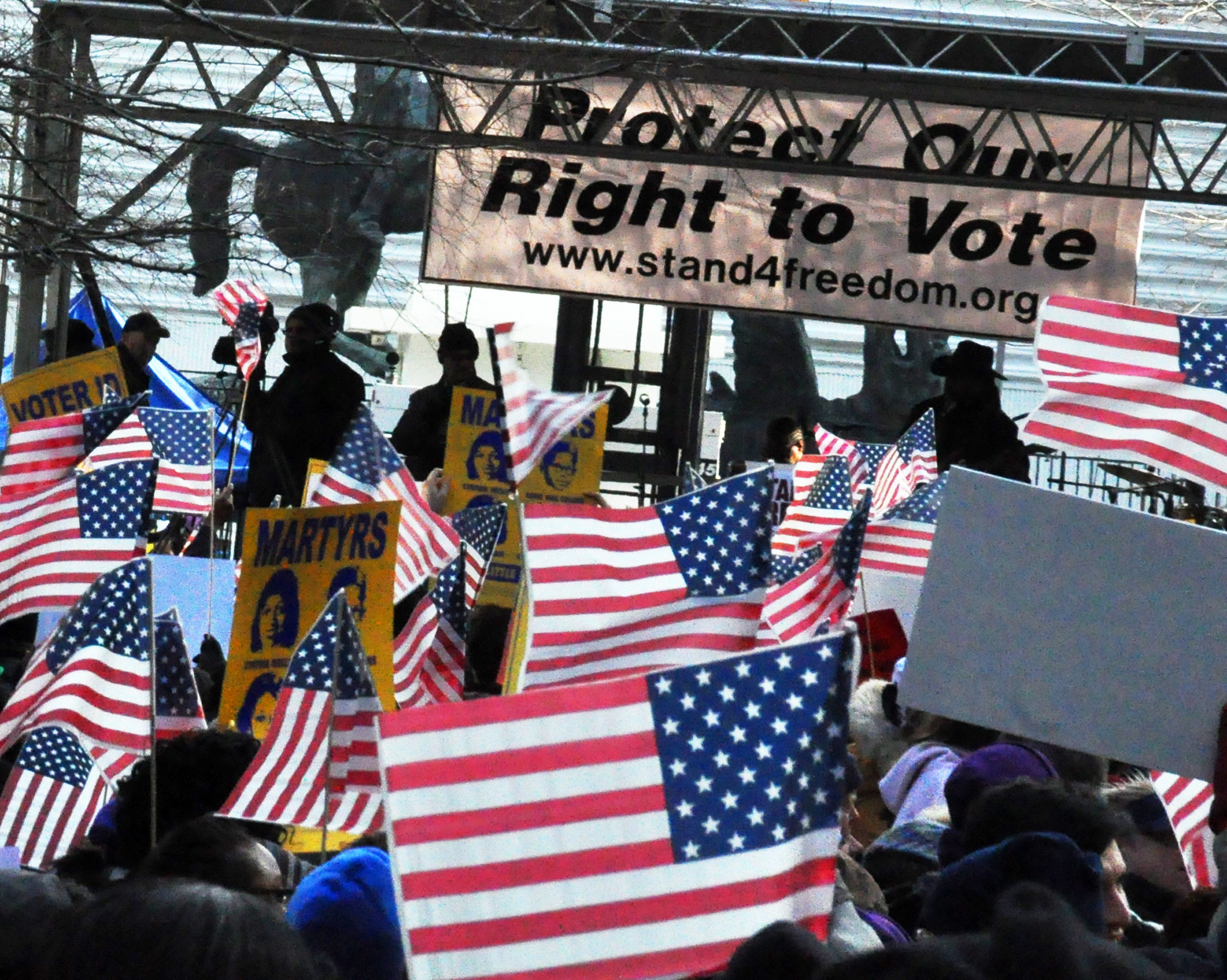 Barrett was asked whether she agreed with her mentor Antonin Scalia’s characterization of the Voting Rights Act as “a perpetuation of racial entitlement.” Barrett refused to answer. “This should sound an alarm for anyone in our country who cares about protecting voting rights for all Americans,” Kristen Clarke, president and executive director of the Lawyers’ Committee for Civil Rights Under Law, testified at Barrett’s hearing.

An Arizona case on the Court’s docket will test another anti-discrimination provision of the VRA, Section 2, which prohibits voting practices or procedures that discriminate on the basis of race. “Given Judge Barrett’s unwillingness to recognize the threats that Black people and communities of color face in voting, I’m deeply concerned about how she would handle this case and many other such cases that will come before the Court,” Clarke told the committee.

Barrett admitted to Leahy that she didn’t know how many people are covered by the Affordable Care Act (ACA), how many people under age 26 have health insurance under their parents’ plans thanks to the ACA, or how many Americans have tested positive for coronavirus.

If she was being straight with Leahy, Barrett is a judge wildly out of touch with the people of this country.

Barrett also refused to tell Sen. Amy Klobuchar (D-Minnesota) that she was aware Donald Trump had opposed the ACA before he nominated her. When Sen. Kamala Harris (D-California) asked Barrett whether she had heard Trump’s statement committing to nominate judges who would strike down the ACA, the judge replied, “I don’t recall hearing about or seeing such statements.”

Has Barrett been hiding under a rock? Or is she lying?

On Nov. 10, the Court will hear arguments in California v. Texas, which will determine the fate of the ACA. The Trump administration’s brief in the case says, “The entire Affordable Care Act must fall.” Barrett wrote in a 2017 law review article that Roberts’s 2012 majority opinion upholding the law “pushed the Affordable Care Act beyond its plausible meaning to save the statute.” 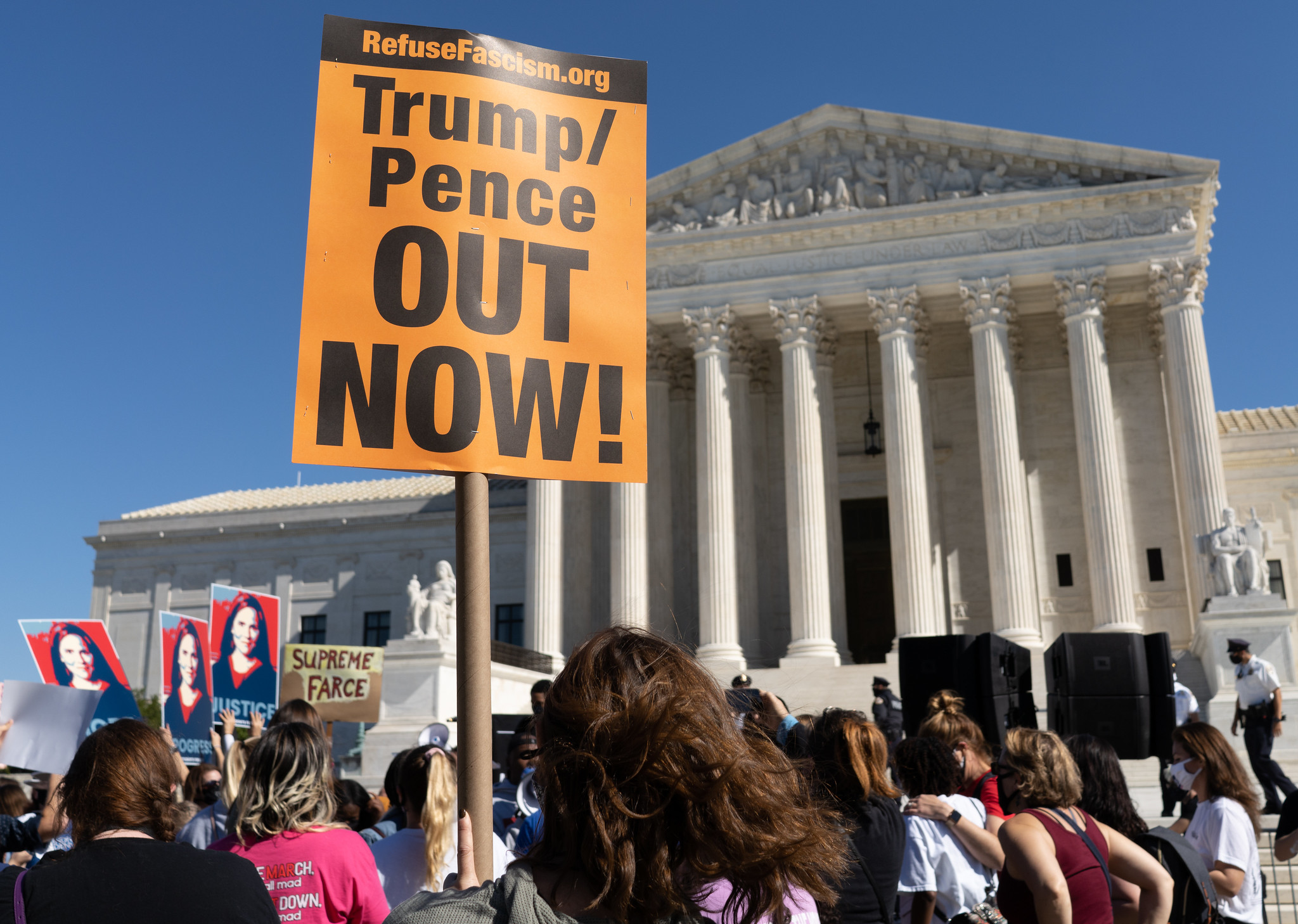 The Democrats on the Senate Judiciary Committee spent most of their time providing personal stories demonstrating the tragedy that would befall tens of millions of Americans who would lose their health care if the Court repeals the ACA, especially in the midst of a pandemic.

But they could have better explained why Trump is so eager to repeal “Obamacare” and why congressional Republicans have tried to abolish it 70 times. It’s the powerful insurance lobby that has Trump and GOP congress members in their pocket. Although Republicans have been promising for years that they would replace Obamacare with a better plan, no plan has ever been forthcoming.

Dr. Farhan Bhatti, CEO of a Michigan nonprofit clinic, testified that without the ACA, insurance companies could discriminate against anyone who has tested positive for Covid-19, which would constitute a pre-existing condition, as well as any other pre-existing conditions. They could refuse to provide coverage or raise costs. “Any judge who opposes the ACA endangers a lifeline that my patients count on to stay healthy, and in many cases, to stay alive,” Bhatti told the senators.

In light of the national discourse and public protests against systemic racism and police brutality, Booker asked Barrett what books or law review articles she’s read about racial disparities in the criminal legal system. Barrett cited the sentencing guidelines, sentencing commission reports and “conversations” she’d had. Booker said there are books on the bestseller list, including The Color of Law, Just Mercy and The New Jim Crow, because “people are seeking to know what the facts are.”

Booker told Barrett that the “war on drugs” is a war on Black and Brown people “because of the outrageous disparities.” He confronted Barrett with a lengthy blog post she wrote questioning whether people sentenced under the racially discriminatory cocaine law should have their sentences adjusted retroactively after the law was overturned. Booker noted that of the 20,000 people affected, 98 percent were Black or Brown. He pointed out that Barrett never mentioned that the prior law, with its racially biased sentencing disparities for crack and powder cocaine disproportionately affecting Black people, was unjust.

When asked about the standard for overruling Supreme Court precedent, Barrett called Brown v. Board of Education — which held that “separate but equal” schools discriminated against Black children — a “super-precedent,” that is, “precedent that is so well-established that it would be unthinkable that it would ever be overruled.”

But Barrett refused to say that Roe v. Wade is also a super-precedent because many people are trying to overturn it. That’s not surprising as she signed a statement referring to Roe as “barbaric” and a “raw exercise of judicial power.” She also opposed access to contraception under the Affordable Care Act, calling it “an assault on religious liberty.”

Sen. Mazie Hirono (D-Hawaii) cited 14 abortion cases winding their way through the courts. They include abortion bans between six and 24 gestational weeks, bans on dilution and extraction (which account for almost all second trimester abortions), requirements that fetal remains be buried or cremated, unnecessary requirements imposed on abortion providers like transfer agreements with hospitals, reason bans, and parental notification and consent requirements.

Many of these cases could reach the Supreme Court. Although no case has yet squarely presented the issue of whether Roe should be overturned, right-wingers have erected procedural barriers aimed to cause death of abortion by a thousand cuts.

Make no mistake: Reproductive rights are on the line if Barrett joins the Court.

Sen. Sheldon Whitehouse (D-Rhode Island) did a masterful job of explaining how dark (secret) money has been spent to overturn the ACA and put Barrett and other right-wingers on the high court. He described “orchestrated” campaigns with amicus briefs written by right-wing organizations and signed by GOP senators. Whitehouse cited “the Judicial Crisis Network campaigning for Supreme Court nominees, writing briefs for senators against the Affordable Care Act, supporting the Republicans who are bringing this case, and leading the selection process for this nominee.”

Whitehouse displayed a list of 80 cases decided by a 5 to 4 vote with no Democrats joining the majority. These cases were backed by identifiable GOP donor interests and they won all of them. They’re not about Roe or the ACA, Whitehouse told Barrett. “They’re about power,” he said, listing three categories of cases: (1) unlimited dark money in politics (Citizens United); (2) diminishing the civil jury (“annoying to big corporate powers”); and (3) weakening regulatory agencies (favoring polluters like the fossil fuel industry and Koch industries).

Barrett explained the process by which a case gets to the Supreme Court: Someone suffers an injury, gets a lawyer, sues, and the case winds its way up to the high court. But Whitehouse clarified how big funders inject cases into the system to serve their political and economic interests. He described “a whole array of legal groups also funded by dark money, which … bring cases to the court. They don’t wind their way to the court, your honor, they get shoved to the court by these legal groups. Many of which asked to lose below so they can get quickly to the court to get their business done there.” Whitehouse cited the example of a $45 million campaign to get rid of union dues which succeeded when the Court decided Janus v. AFSCME in 2018 and overruled its 40-year-old decision in Abood v. Detroit Board of Education.

Trump has made clear he wants Barrett confirmed to the Court in time to decide election challenges. Nevertheless, Barrett refused to commit to recusing herself in any cases that come before the Court contesting the election results.

The Democratic senators repeatedly said that the GOP’s hypocritical rush to install Barrett on the Court while people are already voting in the middle of a pandemic is “not normal.” They should instead be working to pass COVID-19 relief for the millions of people who are suffering.

Barrett will be confirmed to the Court and at age 48, she could serve for decades. She will create a 6 to 3 right-wing majority on the Court. But if the Democrats win both the presidency and the Senate, two of the three branches of government could check and balance the judicial one.