Why did Trump agree to this book: Details recounted are less important than the projection of the Oval Office’s powerful, intoxicating atmosphere dominated by the commanding presence of the Chief Executive, writes Michael Brenner.

The purpose is similar: to immortalize the ruler at the height of his powers. To show a forceful leader mastering a daunting problem with resolve, sobriety and dedication to the interests of his fellow citizens.

This being America, the occasion has to be one of action and suspense. Bush the Younger seeking retribution for 9/11. Barack Obama exorcising the devils of Afghanistan. Now, Donald Trump outsmarting the corona virus.

A narrative account does have a few drawbacks. It cannot fix the image at a single moment that will last for eternity. However laudatory, the written account is liable to be viewed differently as time goes by. A picture wings the flying hour; a story is part of the flow of events.

There is the further drawback that the chronicler may depict persons and things in ways that are not entirely complimentary to the main protagonist in the drama. Woodward’s talents may be available for lease but they do not come with a money back guarantee. 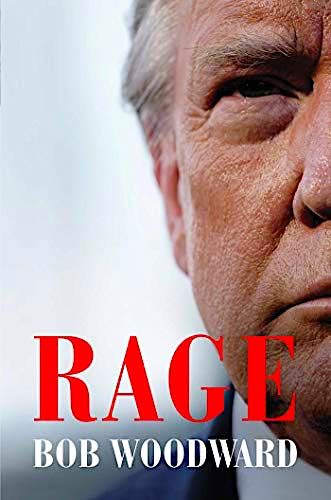 For the exchange currency is not hard cash but access. The White House gets surefire blockbuster publicity; Woodward gets to further enhance his standing as the ultimate insider in the world of political celebrity. The latter’s value necessitates his presuming to keep a measure of distance as disinterested observer.

That means doing an only modest amount of airbrushing of character and action. A further complication is that while the president is the patron, the commission is loosely written to allow the artist unmonitored access to other members of the court. Their vanities and ambitions are not identical with his.

The Intoxication of Celebrity

In the light of the ensuing risks, why does the prickly Donald Trump enter into such a pact? Our celebrity culture provides part of the answer. Publicity is what it is all about – and Woodward in the past assured that it will be favorable publicity, on the whole.

A public figure whose meteoric rise is a testament to star power must be acutely sensitive to the imperative of how vital to success are mythic imagery and turns in the limelight. The stage lights have the special glow when energized by a bestselling insider account of high performance.

The details of what is recounted is less important than the projection of the Oval Office’s powerful, intoxicating atmosphere dominated by the commanding presence of the Chief Executive of the United States. That in itself dulls the reader’s critical instincts and holds at bay skeptical impulses.

Yes, lots of attention is given a few difficult moments and personality clashes. But that often does little to detract from the intended overall positive impact.

Then there is the simple truth that presidents want to celebrate themselves. They are the ultimate celebrity in a celebrity culture. They in fact feel proud of what they do and how they do it. They are not big on self-reflection which they see as a sign of weakness.

Doubts and second thoughts are avoided as activities that can reduce the sense of potency and competence crucial to the job.

To hell with yesterday; today is where the action is and there is tomorrow’s challenges in waiting. The past always can be spun; truth is ductile; reality is clay in my hands. A successful leader must never allow the future to be hostage to history – even yesterday’s history. Except where history can be bent better to serve fresh exigencies – going forward.

“How much time do you think you need, Mr. Woodward?” 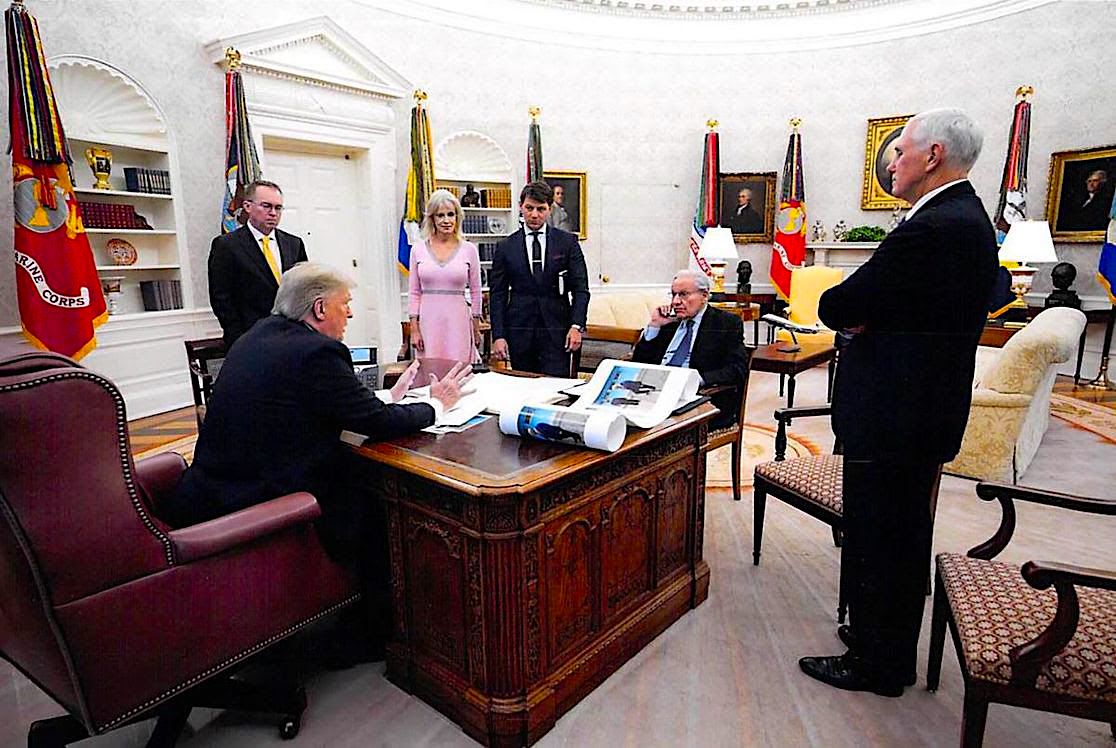 Trump with Woodward in the Oval Office. (White House Photo)

Successive presidents have fallen prey to this vanity – starting with Bill Clinton. George Bush, for his part, experienced repeated embarrassments yet went down this road on three successful occasions. So, too, did Barack Obama – a far more guarded, and prudential personality. The latter indulgence gave us Obama’s War.

That volume provided us with valuable insights that are highly instructive as to how great matters of state are addressed in contemporary America – the singular wackiness of Donald Trump aside. Most striking is that the process of deliberation and decision bears little resemblance to the exalted images that we hold as derivatives of uncritical popular history and hagiographic documentaries.

The persons we see are not paragons of integrity devoted only to serving the commonweal by making the soundest decisions possible. They exhibit vanity, careerism, dogmatism and a readiness to skirt the standards of honest debate. They are very much political animals who keep their eyes on multiple arenas: the electorate, Congress, bureaucratic rivals, future histories of what transpires.

Hence, the aggregate of their acts amounts to something well short of coherent, intellectually disciplined discourse. Applying academic models of a sound policy process only highlights how deeply flawed that real life process is. One searches in vain for a clear, crisp statement of what the problem is.

Whether the subject is Syria, Afghanistan, China, Russia or Covid-19 – the fog quickly sets in. At their worst, deliberations have the odor of a frat bull session marked by a lot of “I feels,” “it just seems to me,” “there is no way that we can accept that…etc”). That is true even when the president sitting at the head of the table is an Ivy League law school graduate. And, of course, electoral political considerations loom over everything.

To Act or Merely to Be

This practice of commissioning word portraits of sitting presidents may hark back to the age of monarchy, but it is something quite novel in this time and place. It is hard to imagine Abraham Lincoln or Franklin Roosevelt confiding in a predecessor to Woodward.

They weren’t inclined toward vanity projects. A key difference is that they were fully absorbed with purposes of historic consequence. They had better things to do with their time than participating in a glorified promotional campaign. Their staffers were similarly engaged.

What we are seeing is yet another post-modern deformation of public life. The United States predictably is in the vanguard. The practice, though, has spread to Western Europe. There, Tony Blair, Nicolas Sarkozy and Francois Hollande have imitated.

It comes down to whether one is prepared to act as president (prime minister) or, instead, is content simply to be president. Serious leaders like Putin or Xi never would contemplate anything of the sort. Their legacies are transformations which will endure well beyond Trump’s contributions to the science of immunology.

The commissioning of Woodward stems from the same mindset that impels movie actors to crave a star on the Hollywood walk of fame – and all manner of celebrities to view an invitation from Oprah for an extended one-on-one as a way to leave a votive memorial for posterity. 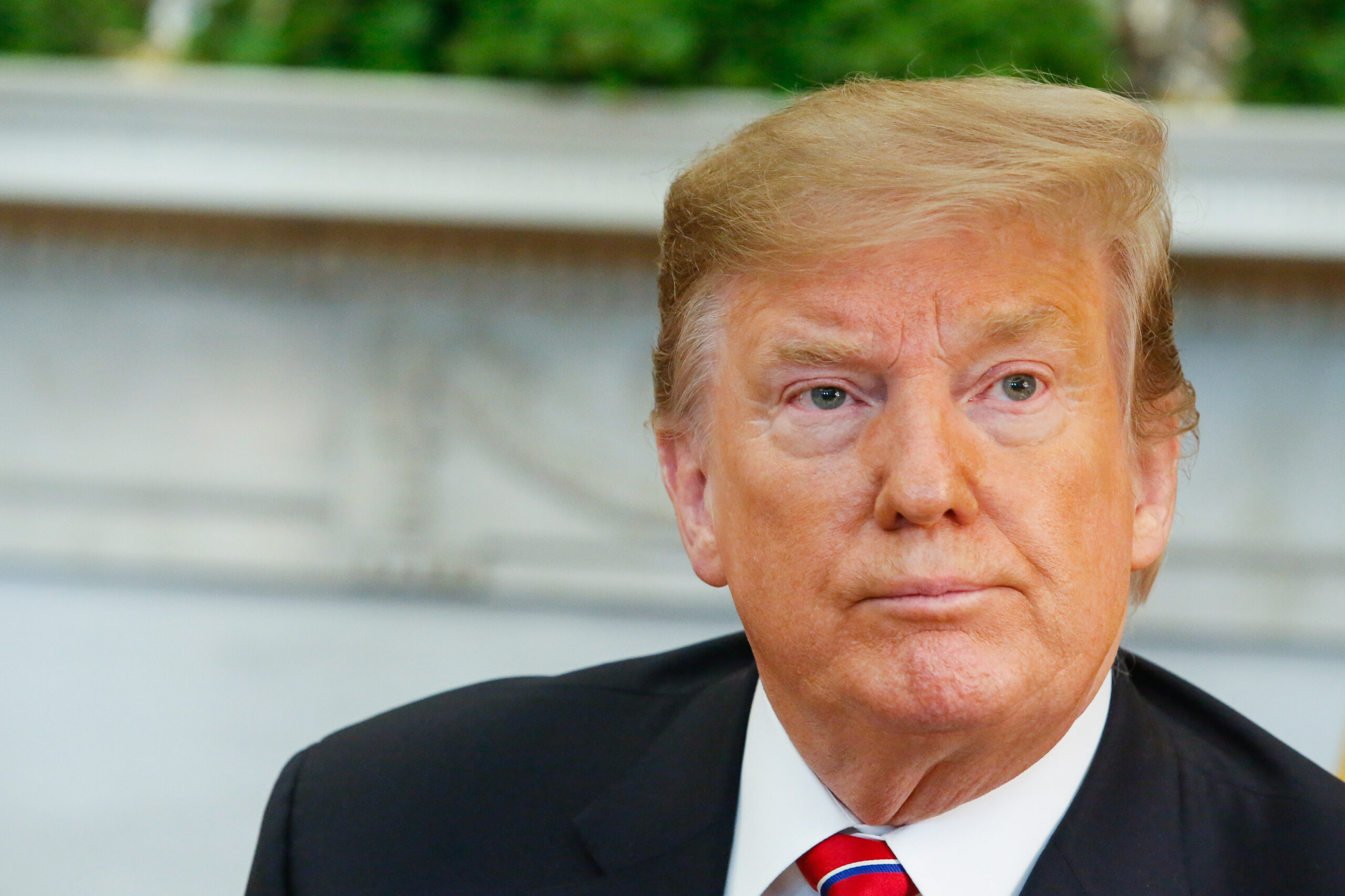 There are two ways of looking at the contents of the Woodward book. One is to focus on the documented revelation of how the president systematically lied about COVID-19, deceiving the country about the seriousness of the virus’ pandemic. In this respect, there is the confirmation from Trump’s own lips that he knew of the coronavirus’ lethality but was determined to downplay it so that the country’s attention would not be diverted from the story line he had scripted for his presidential re-election campaign.

The portrait thereby drawn is of a narcissist who lacks any sense of public responsibility and empathetic concern for the welfare of others.

The other approach is to wonder why any of this should come as a surprise. The man’s crassness; his utter disregard for the obligations of the office he holds; his fanciful self-images as world-beater, heroic figure and national savior; his cavalier arrogation to himself of privileges denied every other person on the face of the planet; his brazen shamelessness; the toadying of the sycophants who hang around him; the ease with which he intimidates public officials – including the most senior, distinguished scientists who, too, savor their moment in the limelight; the absence of professional and personal integrity on the part of all those recruited to act in the Trump production of his life’s triumphs – all of this has been on display for years.

Only a few anecdotal bits-and-pieces in the Woodward account are fresh. Anyone half-sentient has seen, heard and read all about this since 2016. Since then, a trove of insider books by people who worked closely with Trump in the Oval Office have been published and publicized. By Bolton, by McMaster, by Comey, by Amoroso, by Anonymous – and now by Michael Cohen.

Their picture of our deranged president has been reinforced by the testimony of other close collaborators like former Chief-of-Staff General Francis Kelly and General James Mattis former secretary of defense. Moreover, we have the testimony of his own sister, and his niece (a trained psychologist) that all of Trump’s deranged personality traits have been there since childhood.

Never has there been such an abundance of evidence as to the character, and emotional/mental state, of a president in full view. Trump makes no attempt to conceal it. It is out there in the limelight daily.

It is the man’s shamelessness, his living in a fantastic world wherein actual reality and the imaginary are totally fungible, that permits him to carry on in this fashion. Here have been two noteworthy enabling factors:

One is the extreme reluctance on the part of the psychiatric profession to point out the obvious: the man is seriously ill. Thanks to Trump’s extreme extroversion, and the lifetime monitoring by intimate family members, an observant analyst probably knows more about his psychological make-up than they do most of their client/patients. Narcissists, in particular, usually are impenetrable since they compulsively devise ingenious stratagems to protect their inner being from any self-awareness.

The other, more critical factor is the willingness of nearly half the country to lend their support – if not always to view favorably – the antics of this dangerous madman who rules them. Isn’t the foundational truth that in our increasingly nihilistic society, the abnormal has become accepted as the normal?

The frequency and variety of behaviors previously deemed disqualifying or disabling blurs all standards – changes in quantity alter perceptions of kind. It is as if the old benchmarks have been lost in the gnarled grain of our tangled contemporary lives.

← Hey Buddy, Can You Spare Five Bucks to Keep a Great Webcast on the Air?
THE ANGRY ARAB: The Franco-American Designs on Lebanon →