There is no doubt that if thousands follow his lead we will have a world transformed, writes David Swanson. Kevin Zeese died suddenly early Sunday morning at 64. 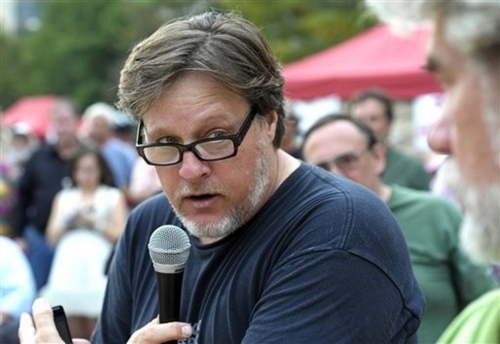 Kevin Zeese was a major constant reliable presence in the movement for peace and justice. He used writing, editing, online and all other forms of communication. He organized events, protests, occupations. He risked arrest. He ran for office. He was an attorney and used the courts and shared his expertise. He thought independently. He acted collaboratively. He maintained good relations with those he disagreed with — even those he disagreed with over that most disagreeable of topics in a collapsing oligarchy: elections.

Kevin and his partner in recent years Margaret Flowers combined art, civil resistance, music, journalism, radio and coalition building to cross issue areas and energize. Losing Kevin is a horrible blow, but nobody can say he didn’t put his time to good use. Nobody can say that if thousands followed his lead we wouldn’t have a world transformed. Nobody can say that he didn’t make a major difference, exposing injustice and changing public policy and culture for the better.

When I type in “Zeese” on davidswanson.org I find this radio show. Take a listen.

Then I find an old announcement of a shadow cabinet with myself as Secretary of Peace and Kevin as Attorney General.

I find plans for event and joint statements — pages and pages and pages of them. I find that Kevin was part of protecting an embassy against a coup, occupying Washington, D.C.; legalizing drugs; opposing NATO; meeting with the U.S. Institute of Peace to ask them to support peace; rallying in support of numerous whistleblowers; speaking out powerfully for countless causes. Kevin was an environmentalist, an anti-racist, a socialist, a war abolitionist, a poverty abolitionist. He supported World BEYOND War from the get-go and served on our advisory board, not only in name, but actually strategizing and advising, wisely and creatively.

Kevin took on the plutocrats, the lobbyists, the Chamber of Commerce, the weapons dealers, the politicians, and the pundits — fairly and fearlessly. Going back through my own website I see how many times I interviewed him and he interviewed me, and I recall how many other people he influenced. But looking up “Zeese” on worldbeyondwar.org, is overwhelming.

Another:
“Iran Wants Peace. Will The US Allow Peace With Iran?”
By Kevin Zeese and Margaret Flowers

See Kevin’s portrait and bio on “Americans Who Tell the Truth.”

But perhaps best of all, watch this video of a speech that Kevin made at World BEYOND War’s conference in Toronto in 2018, in which Kevin discusses his understanding of how to build a social movement that succeeds. Listen carefully.

David Swanson is available to speak to classes and at events in-person or via Zoom/Skype/etc. He isan author, activist, journalist, and radio host. He is executive director of World BEYOND War and campaign coordinator for RootsAction.org. Swanson’s books include War Is A Lie and When the World Outlawed War. He blogs at DavidSwanson.org and WarIsACrime.org. He hosts Talk Nation Radio. He is a Nobel Peace Prize Nominee. Swanson was awarded the 2018 Peace Prize by the U.S. Peace Memorial Foundation. Here is his email: david@davidswanson.org

This article is from DavidSwanson.org

← John Pilger: The Stalinist Trial of Julian Assange
Kevin Zeese, a Fighter for Truth, Dies at 64 →