Civil rights attorney Ben Crump said 29-year-old Jacob Blake’s children were in the car he was attempting to enter as police fired seven shots at his back. 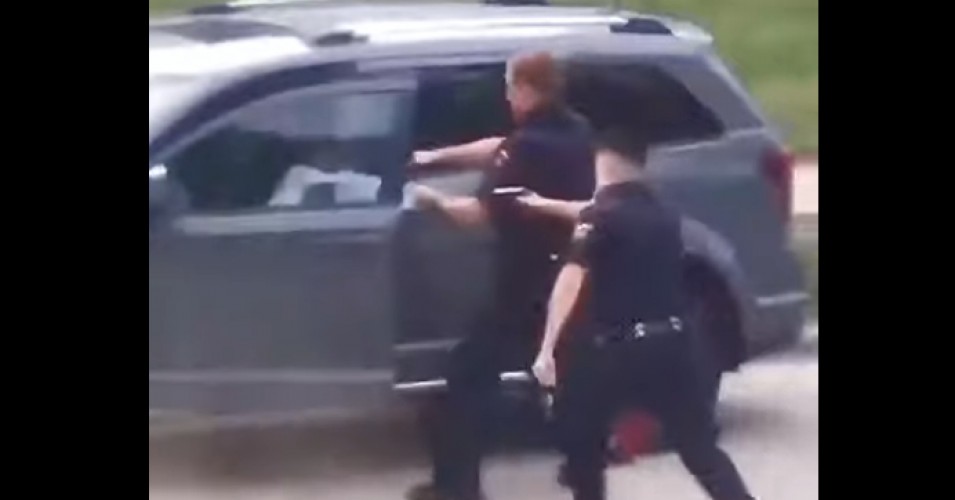 Protests broke out in Kenosha, Wisconsin, and the state’s Justice Department launched an investigation Sunday evening after police officers shot 29-year-old Jacob Blake in the back multiple times at point-blank range as he tried to enter his vehicle.

Witnesses told local reporters that Blake was attempting to break up a fight prior to being shot by the officers, who closely followed Blake to his car and fired seven shots after he opened the driver-side door. According to civil rights attorney Ben Crump, Blake’s children were in the car when the officers shot their father.

Blake is reportedly in serious condition. “He is out of surgery and in the ICU,” tweeted Daniel Poneman, a friend of Blake’s family. “He can make it through this. He is fighting for his life.”

WARNING: Police fire several shots at point blank range towards the back of an unarmed Black man walking away and into a car in #Kenosha Wisconsin. Neighbors report that he was trying to break up a fight between 2 women. Why the use of lethal force? pic.twitter.com/Y0RWQ1y9Jn

In a statement posted to Twitter after cellphone footage of the police shooting circulated on social media, Wisconsin’s Democratic Gov. Tony Evers said: “Tonight, Jacob Blake was shot in the back multiple times, in broad daylight, in Kenosha, Wisconsin. Kathy and I join his family, friends, and neighbors in hoping earnestly that he will not succumb to his injuries.”

“While we do not have all of the details yet, what we know for certain is that he is not the first Black man or person to have been shot or injured or mercilessly killed at the hands of individuals in law enforcement in our state or our country,” Evers said. “We stand with all those who have and continue to demand justice, equity, and accountability for Black lives in our country — lives like those of George Floyd, of Breonna Taylor, Tony Robinson, Dontre Hamilton, Ernest Lacy, and Sylville Smith.”

Following the police shooting, hundreds of Wisconsinites marched through the streets of Kenosha and gathered outside the Kenosha County Public Safety Building chanting, “No justice, no peace!”

At police station right now in protest of Black man shot several times in the back in Kenosha, Wisconsin by police he has not been confirmed dead but in serious condition, state DOJ will probe officer. pic.twitter.com/Yg625gxRW0

As the Washington Post reported, Kenosha police quickly arrived at the site of the demonstration “with riot gear and armed with rubber bullets.”

A video from the scene shows police deploying tear gas against protesters:

Officers deployed tear gas in effort to disperse hundreds of people who took to the streets following police shooting in Kenosha after video appeared to show officers shoot at a Black man seven times as he leaned into a vehicle. https://t.co/Q3Fo0flhCE pic.twitter.com/XgDX8Wu9gz

Jeffery Robinson, the director of the ACLU’s Trone Center for Justice and Equality, said in a statement Monday that “with each of the seven shots fired, police made their intent clear — they believed they had the right to kill an unarmed Black man for the crime of walking away from them.”

“The fact that incidents of police violence like this, the murder of Breonna Taylor as she slept in her home, the murder of George Floyd across the street from a grocery store, the murder of Eric Garner outside of a neighborhood bodega, and countless others have become commonplace shows that the very institution of American policing is rotten at its core,” Robinson added.

Fires have broken out in Kenosha during the protests, including this one at a car dealership.

The Kenosha county courthouse was not set on fire, but protestors entered and damaged the building forcing it to be closed.  Trucks outside the courthouse were set ablaze, as seen in this video:

Here is a live stream of the unfolding events:

← COVID-19: Will Public Schools Survive a Reopening?
WATCH: On the History of US-Backed Coups—Consortium News Editor Speaks to George Galloway →

10 comments for “UPRISING: Protests Break Out in Wisconsin After Police Shoot Black Man in the Back Multiple Times at Point-Blank Range”