The Israeli army has been bombing Gaza and the U.S. just ordered an airstrike on Syria. In a sane and just world, Caitlin Johnstone says both would command intense, international attention. 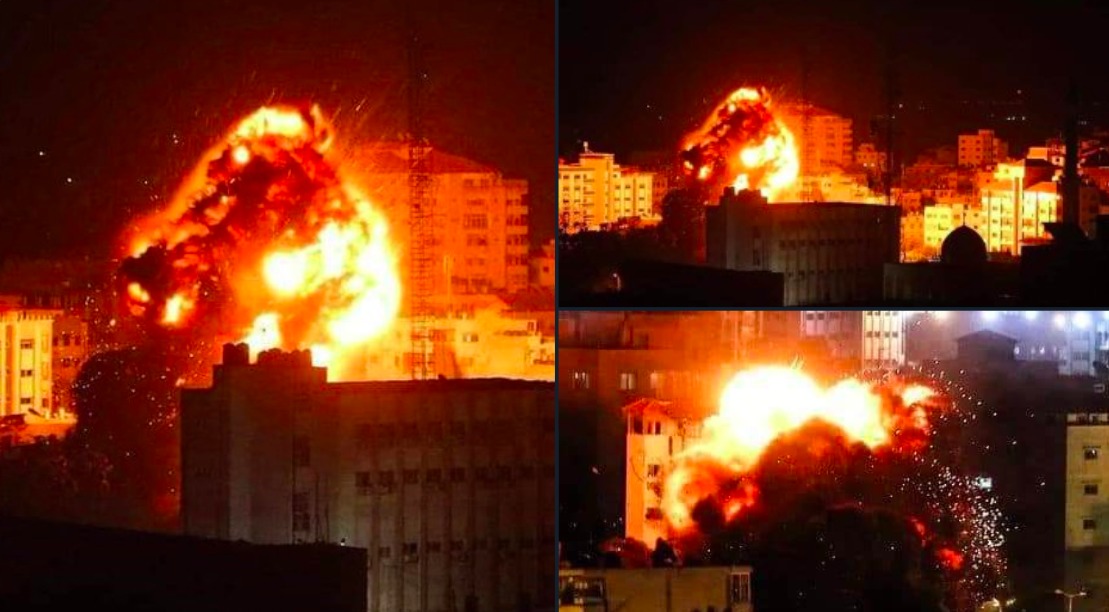 For a full week now the Israeli army has been bombing Gaza, a population that is about to run out of fuel for its only power plant due to a years-long Israeli program of deliberate siege warfare.

On Monday, the U.S. ordered an airstrike on Syrian forces, killing one, when they refused to let the illegal occupying force past a checkpoint in northern Syria.

In both cases an arm of the U.S.-centralized empire used wildly disproportionate force against people who stood against a hostile occupation of their own country. In both cases the more powerful and violent occupiers claimed they were acting in “self-defense.” In both cases dropping explosives from the sky upon human beings barely made the news.

ISRAEL is dropping bombs on Gaza and no one is talking about it.. WHYYYYY.????#Gaza #GazaUnderAttack pic.twitter.com/gGhl8bYKOk

Bombs should not exist. Explosives designed to blow fire and shrapnel through human bodies should not be a thing. In a sane world, there wouldn’t be bombs, and if some mentally unbalanced person ever made and used one it would be a major international news story.

Instead, bombs are cranked out like iPhones at enormous profit, and nearly all bombings are ignored. Many bombs are being dropped per day by the U.S. and its allies, with a massive civilian death toll, and almost none of those bombings receive any international attention. The only time they do is generally when a bombing occurs that was not authorized by the U.S.-centralized empire.

This is one of those absolutely freakish things about our society that has become normalized through careful narrative management, and we really shouldn’t allow it to be. The fact that explosives designed to rip apart human anatomy are dropped from the sky many times per day for no other reason than to exert control over foreign countries should horrify us all.

An interesting social experiment when you talk to someone might be to tell them solemnly, “There’s been a bombing.” Then when they say “What?? Where??”, tell them “The Middle East mostly. Our government and its allies drop many bombs there per day in order to keep a resource-rich geostrategic region balkanized and controllable.”

Then watch their reaction.

I think we don't talk enough (or at all) about how US bombed Laos 270 Million times, making it the most bombed country ever.

There were approximately more than 580,000 bombing missions on Laos between 1964 and 1973, that’s one every eight minutes, every day, for NINE YEARS pic.twitter.com/n9O6ieW5bH

You will probably notice a marked change in demeanor as the person learns that what you meant is different from what they thought you meant. They will likely act as though you’d tricked them in some way. But you didn’t. You just called a thing the thing that it is, and let their assumptions do the rest.

When someone gravely tells you “There’s been a bombing,” what they almost always mean is that there has been a suspected terrorist attack in a Western, majority-white nation. They don’t mean the kind of bombing that kills exponentially more people and does exponentially more damage than terrorism in western nations. They don’t mean the kind of terrorism that our government enacts and approves of.

There’s a lot of pushback nowadays against the racism and prejudices that are woven throughout the fabric of our society, and rightly so. But what doesn’t get nearly enough attention in this discourse is the fact that while some manifestations of bigotry may have been successfully scaled back somewhat in our own countries, it was in a sense merely exported overseas.

Yet even the more conscious among us fail to give this relentless onslaught of violence a proportionate degree of recognition and condemnation, even while the consent for it is largely born of the unexamined bigoted notion that violence against people in developing and non-Western countries does not matter.

Is there an "-ism" to describe a complete lack of regard for the lives of people in developing nations?https://t.co/M1Hm3sF0jL

Like many other forms of bigotry, this one has been engineered and promulgated by powerful people who benefit from it. If the mainstream news media were what it purports to be, namely an institution dedicated to creating an informed populace about what’s truthfully going on in the world, we would see the bombings in foreign nations given the same type of coverage that a bombing in Paris or London receives.

This would immediately bring consciousness to the unconscious bigotry that those in the U.S.-centralized empire hold against people in low- and middle-income countries, which is exactly why the plutocrat-owned media do not report on it in this way. The U.S,-centralized empire is held together by endless violence, and the plutocrats who run it have built their kingdoms upon the status quo of that empire.

When people set out to learn what’s really going on in their world they often start cramming their heads with history and geopolitics facts and figures, which is of course fine and good. But a bigger part of getting a clear image of what’s happening in the world is simply turning your gaze upon things you already kind of knew were happening, but couldn’t quite bring yourself to look at.

← COVID-19: Pentagon Secrecy on Virus at Guantanamo Another Reason to Shut Offshore Prison, Democratic Senators Say
Whose Century Is It? Don’t Ask Trump →