Patrick Maynard connects U.S. and U.K. influence to the indifference of the West’s top anti-corruption NGO toward the imprisoned WikiLeaks founder. 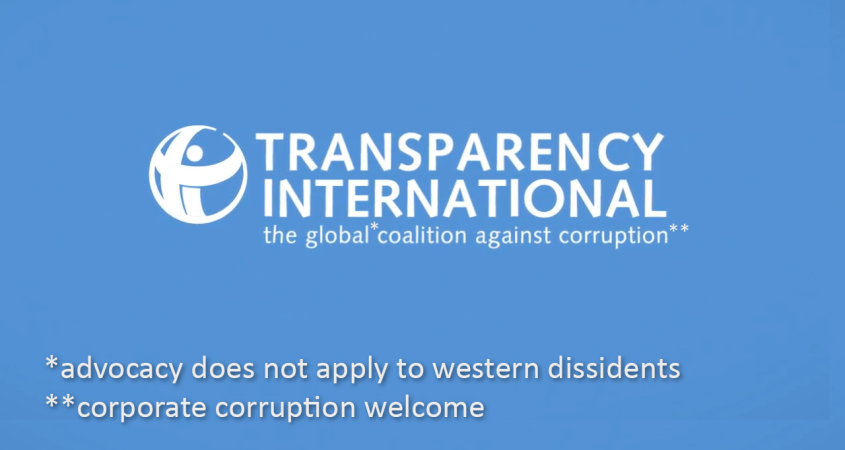 By Patrick Maynard
in Berlin
The Grayzone

On a cool July day, the Berlin neighborhood where Transparency International’s global headquarters is situated feels a thousand miles away from London’s Belmarsh Prison. But it is not just the pleasant setting a few blocks from the Spree River that makes the influential nongovernmental organization seem so detached from the maximum security penitentiary’s most famous inmate, WikiLeaks founder Julian Assange.

Transparency International has been vocal in defending jailed opposition activists in states such as Zimbabwe, Russiaand Venezuela. But when it comes to Assange – far-and-away the world’s most prominent imprisoned transparency activist – the NGO has not said a word since a week after his arrest in April 2019.

When Transparency International did mention Assange’s arrest, it came in the form of a mealy-mouthed blog post that referred to the WikiLeaks founder as “polarizing” and failed to condemn his persecution.

Transparency International happens to be funded by the U.K. government which is currently jailing Assange, and by the U.S. State Department, which is headed by Mike Pompeo – the former CIA director, who presided over a black operations campaign to destroy WikiLeaks.

Much has changed since Transparency International last issued a statement about Assange. A UN special rapporteur found evidence that Assange may have been tortured. The judge on the case was switched after significant conflicts of interest were discovered.

Assange’s bail-jumping penalty of 50 weeks was also exhausted in April, meaning that for many weeks, the British have been holding him purely as a favor for their American allies, without Assange being formally charged with a British crime. And, perhaps most relevant to the case, 36 members of the European Parliament have recently called for Assange to be released from Belmarsh on press freedom and humanitarian grounds.

Unlike Transparency International, several other large NGOs have been vocal about the case within the last year. Those groups include Amnesty International, the American Civil Liberties Union, the Courage Foundation, Reporters Without Borders, and the Freedom of the Press Foundation. A total of 40 rights groups recently signed an open letter urging Assange’s release.

The Most Prominent Jailed Transparency Activist

Julian Assange first became well-known when WikiLeaks published a series of document troves that embarrassed the United States and its allies. Several stashes of military information exposed possible war crimes on the part of U.S. soldiers, while a collection of State Department cables from 1966 through 2010 showed American diplomatic officials being manipulated to act on behalf of U.S. companies abroad.

Shortly after those releases, Assange was investigated over a possible sexual assault in Sweden. Assange and his team worried that the investigation might be a pretext to detain and extradite him into U.S. hands, so they offered to have him testify via video link from Britain. Swedish authorities refused. Assange jumped his British bail and took refuge in the Ecuadorian embassy, where he lived for nearly seven years. The sexual assault investigation was later dropped.

By 2018, the Ecuadorian government had apparently had enough of being ostracized on Assange’s behalf. The government of President Lenin Moreno went into talks in the summer of 2018 as a prelude to Assange’s extraction from the embassy and detention, which happened in April 2019. A federal grand jury in the U.S. returned an 18-count superseding indictment charging Assange with computer intrusion and with breaking the U.S. Espionage Act of 1917.

A key part of the U.S. government’s case is the idea that, by publishing leaked information, WikiLeaks damaged the safety abroad of people friendly to the American cause. Asked by The Grayzone by email if the Justice Department would be willing to name a single person who had been killed or injured as a result of WikiLeaks material, the DOJ declined to comment.

There was an initial groundswell of solidarity from abroad after Assange’s arrest, with publications including The New York Times and The Washington Post commenting on how the Espionage Act charges threatened press freedom. A few major international human rights NGOs spoke out as well.

That support has been uneven over the last 15 months or so, however. After the initial burst of coverage, the hearings faded into the background, with few mainstream American or British media organizations reporting on Judge Lady Emma Arbuthnot’s ties to U.K. intelligence and defense interests while she presided over pre-extradition hearings.

The group’s silence over the past year stands in contrast to earlier times when it had been vocal about freedom of speech, and had not been shy about bringing up Assange’s name as a hook for its blog posts on the topic.

Tracking outside influence on Transparency International can be difficult, as it is made up of more than 100 independent chapters around the globe. The organization’s USA chapter honored the notoriously war-profiteering oil services giant, Bechtel, with its  “corporate leadership award” in 2016. Two years earlier, Transparency USA honored the arms manufacturer Raytheon “for anti-corruption efforts.” Both Bechtel and Raytheon were major donors to the organization at the time. 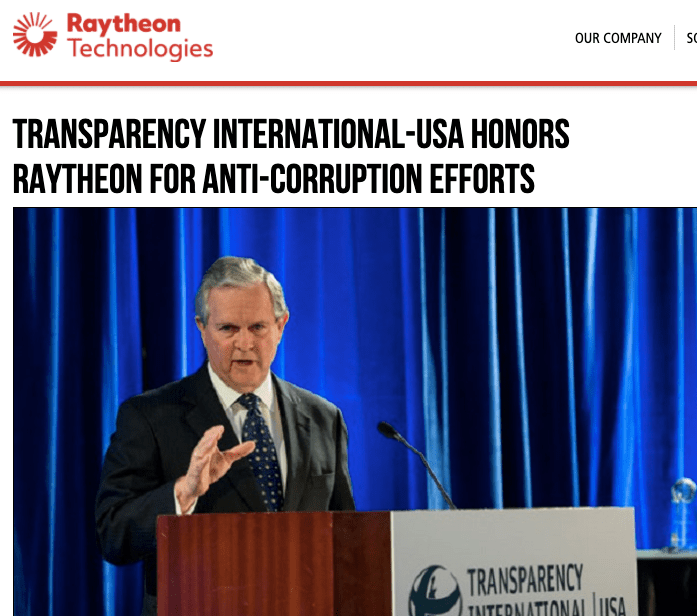 In 2017, Transparency USA was finally disaccredited for fostering apparent pay-for-play relationships under the guise of anti-corruption efforts. However, Transparency’s Secretariat defended the USA chapter’s honoring of Hillary Clinton with its “integrity award” in the face of revelations of influence-peddling by the Clinton Global Initiative.

The Little Sis database, which tracks relationships of organizations by analyzing their donors, board members and leadership – indicates that Transparency has shared adjacencies with organizations including the U.S. Chamber of Commerce, the US Agency for International Development (USAID) and Infraguard – a “partnership between the FBI and the private sector” that is “dedicated to sharing information and intelligence to prevent hostile acts against the U.S.”

Transparency International currently lists funding from the U.S. Department of State, whose current leader, Pompeo, apparently authorized the spying ring that targeted Assange inside the Ecuadorian embassy. It also receives support from the Department of International Development of the U.K. government, which is currently prosecuting Assange. In fact, much of the NGO’s funding comes from EU governments.

Bell, the Transparency spokesman, stated in an email to The Grayzone that his organization’s international board has not received pressure regarding the Assange extradition hearings from U.S. or U.K. entities, including governments.

Assange has made some powerful enemies over the years. He angered Republicans by exposing inconvenient truths behind the military interventions initiated by President George W. Bush, and infuriated Democrats by dumping a cache of embarrassing emails from Hillary Clinton’s personal server just before the 2016 election.

Parker Higgins, the advocacy director at Freedom of the Press Foundation, argues that individual feelings about Assange shouldn’t get in the way of a clear-eyed view of the gravity of the extradition case.

“The importance of this case goes far beyond the facts of who Julian Assange is and what he is alleged to have done,” Higgins declared in an email to The Grayzone. “There is a principle and a precedent at stake that are important considerations for press freedom, no matter how you feel about Julian Assange himself.”

Higgins asserted that large countries are now attempting to extend their own jurisdiction globally – especially on what he calls “borderless issues” like censorship – and that an Assange extradition would be a deepening of that trend.

China, for example, has recently attempted to assert that non-citizens in foreign countries are subject to its new national security law regarding speech about Hong Kong. That has chilled activism as far away as Canada. In the case of Assange, the United States is attempting to apply its rarely used 1917 Espionage Act to an Australian journalist operating in Europe, activists argue. In doing so, they say, the U.S. government is extending its jurisdiction and setting up a potentially dangerous template for future generations to follow.

There are other aspects of the case that trouble many close observers.

Assange‘s lawyer, Edward Fitzgerald QC, said in April that there had been no “direct access” with his client for “more than a month.” That situation has gotten worse as the Covid-19 outbreak has continued, with a recent hearing featuring Assange literally boxed in inside a glass container, through which it was difficult to hear.

Back when Assange did have regular access to legal counsel – during his time in the Ecuadorian embassy – his interactions with others were secretly recorded by a Spanish contractor with ties to the CIA, as The Grayzone’s Max Blumenthal has documented in detail. In most American court cases, surveillance of attorney-client meetings would result immediately in a mistrial being declared.

Additionally, Assange’s health has been declining. Last month, 216 doctors from 33 countries wrote to medical journal the Lancet protesting what they called “torture and medical neglect of Julian Assange” and stating that “under the Convention Against Torture, those acting in official capacities can be held complicit and accountable not only for perpetration of torture, but for their silent acquiescence and consent.”

While some reporters have argued that Assange’s extradition would not set a precedent for cases against other journalists, since Assange is accused of helping a source crack a password, Higgins argues that future judges are not necessarily likely to parse that difference.

“There’s no guarantee that the line a journalist draws now is going to be the one that future judges follow,” Higgins stated. “The threat of criminal charges for talking to sources is sure to have a chilling effect.”

Patrick Maynard is a journalist whose work has featured in The Baltimore Sun, Truthout, Vice and The Grayzone.