Australian Prime Minister Scott Morrison held a somber press conference on Friday to announce that the Australian Federal Police (AFP) and the Australian Security Intelligence Organisation (ASIO) had conducted a raid on a sitting member of the New South Wales parliament all because, so far, he’d said favorable things about China and had gone on junkets to the country.

The Murdoch-owned Australian newspaper reported that the office and Sydney home of NSW Labor MP Shaoquett Moselmane had been raided because he “has repeatedly praised Beijing, even describing Chinese President Xi Jingping’s response to the COVID-19 pandemic as ’emphatic’ and ‘decisive.’”

Moslemane was portrayed as an “extremely serious” threat because he had written about China: “Failure to contain the epidemic could mean thousands if not hundreds of thousands of lives would be lost. The combined phenomenal effort of the state and the people in the fight to contain the virus was breathtaking.”   The MP was also deemed a threat because, as The Australian reported:

“In April, Mr Moselmane resigned as Upper House assistant president after being caught on camera again praising President Xi’s handling of the virus, even as concerns arose that China had underplayed the severity of the crisis.

In one 2015 trip to Shanghai, Mr Moselmane met with the chairwoman of the Chinese People’s Consultative Conference of Songjiang, Jie Ju. That organisation was described by the United States as ‘the highest ranking entity overseeing the United Front system’”.

The Sydney Morning Herald, which broke the story, reported: “The probe is examining if covert activities or agents directed by the Communist Party of China may have sought to influence Mr Moselmane, his part-time staffer John Zhang, or others in Mr Moselmane’s office and, if that can be proven, whether the politician and his staffers had any knowledge or involvement.” So it’s not proven and he may not have even known about it.

The newspaper thought it necessary to add: “The Sydney Morning Herald and The Age [in Melbourne] is not suggesting the allegations involving Mr Moselmane and his office are proven, only they are the subject of an ASIO and federal police inquiry.”

So far this is all that is known about what Moselmane may have done. Federal police questioned him in his parliamentary office.  Even aggressive prosecutors in the U.S. Department of Justice wait to hold a press conference until formal charges against someone are filed. [UPDATE: Moselmane said Monday that he was not the subject of the investigation.] 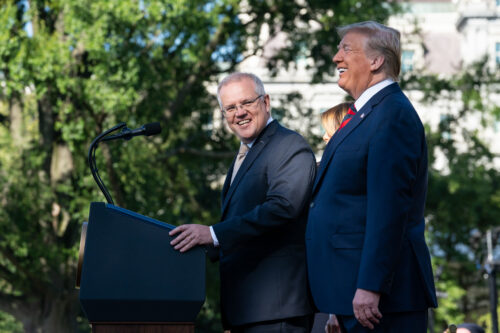 Despite having no other publicly available evidence, Morrison said at the press conference: “I think – the actions of the Australian Federal Police and ASIO demonstrate that the threats in this area are real. The need to take action is necessary and the government is absolutely determined to ensure that nobody interferes with Australia’s activities.”

Morrison added: ““We won’t cop anyone coming and seeking to interfere in our political system, in our energy sector, in any area of perceived area of opportunity for an outside actor. We won’t cop it. We are a resilient people. We will stand up to it. And we will take action, as what you’ve seen today demonstrates.”

The prime minister spoke with certainty about Moselmane’s implied guilt, when it’s not even known what crimes he may have committed. Such an announcement could have waited until solid evidence of wrongdoing was ready to be made public, unless other motives are involved.

The Australian Broadcasting Corporation reported: “If Mr Moselmane is charged, he will be the first person to face legal action under the Federal Government’s legislation to counter foreign interference. The ABC has previously been told that national security organisations have been ‘chomping at the bit’ to get a few scalps.’ The AFP and ASIO statements said, despite the raids, there was ‘no current or impending threat to community safety.'”

Then came the kicker from AFP and ASIO: “As this investigation remains ongoing, there will be no further comment.” The investigation has always been ongoing so one wonders why any comment was made at all, let alone a press conference by the prime minister speaking about “threats” that the police say don’t exist.

The legislation to counter foreign interference is supposed to be applied to all countries. The country that interferes most in Australian affairs is clearly the United States, a fact well-known by China, which might want to bring Australia closer to Beijing and further from a threatening Washington.

The reaction of Moselmane’s party was no better.  The opposition showed it was a good soldier by suspending him and banning him from its caucus.

Jodi McKay, the NSW opposition leader, said “It’s dreadfully concerning. It’s terrible. There is an expectation on MPs that whatever they do is in the best interest of this state.” She then said his suspension from the party was underway.

Inevitably, the United States, the ringleader of the anglophone Five Eyes intelligence system (U.S., Canada, Britain, Australia and New Zealand) played a subtle role in describing the Chinese People’s Consultative Conference of Songjiang, which Moselmane met with, as  “the highest ranking entity overseeing the United Front system,'” described by The Australian as “Beijing’s secretive network of foreign influence operations.” At this point, this seems to be classic guilt by association.

Five Eyes media has been amplifying the story. The BBC reported it, quoting The Sydney Morning Herald as saying that “the investigation had been running for months. No allegations had been proven, the newspaper reported.”  The New York Times, which rarely reports on Australia, ran a staff-written report about a local politician saying, “Australian authorities raided the home and office of a state lawmaker on Friday as part of a sweeping investigation into allegations of a Chinese government plot to manipulate the country’s politics and policy.”

Cooper is the correspondent who relied on a secret Canadian intelligence document to report falsely that Consortium News was “part of a cyber-influence campaign directed by Russia.”

A man’s reputation may be being sacrificed on the altar of the new Cold War against China emanating from Washington and eagerly followed by Canberra. Moselmane may or may not be guilty of a crime. But at this stage of speculation, it is scurrilous to portray him as a threat, to suspend him from his party and smear him when he has so far committed no “crime” except saying favorable things about China and traveling there.

That Morrison wouldn’t wait until the state had evidence to present—if there is any—is indeed evidence of a campaign to smear a politician in the midst of Australia’s and America’s orchestrated anti-China campaign, even though it runs against Australia’s economic interests.

It has become a lynch-pin of Donald Trump’s re-election efforts to deflect blame to China for his nearly criminal mishandling of the pandemic (in which he’s threatening lives with public rallies and insisting on holding the Republican Party convention in August.)

“It looks as though Moselmane is being purged for his publicly expressed  favorable  political views on China,” said Tony Kevin, a former Australian ambassador to two countries and a Consortium News contributor. “Even if ASIO and AFP do not discover any evidence of foreign interference in his activities, he is destroyed anyway as a Labor politician. It looks like pure McCarthyism.”

← Doctors for Assange Say UK May be Liable for His Torture
ASSANGE EXTRADITION: ‘Free Speech’ in the US Empire is as Illusory as ‘Free-Range’ Eggs →

34 comments for “McCarthyism Down Under”