It’s hard for Radio Free Europe / Radio Liberty to sell the USA as a shining example of civil liberties and democracy when the internet is drowning in pics of police violence, writes Yasha Levine. 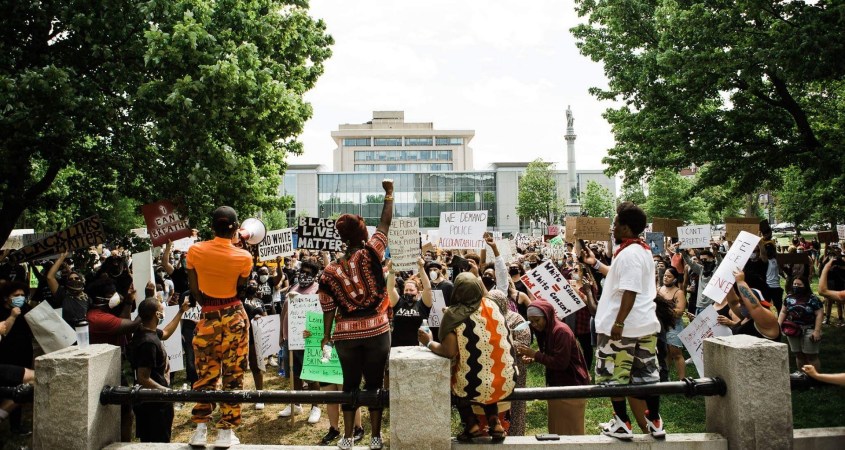 By Yasha Levine
The GrayZone

Here’s the front page of the RFE/RL English-language portal from June 5, 2020. (Thanks to Bryan MacDonald for catching it.) 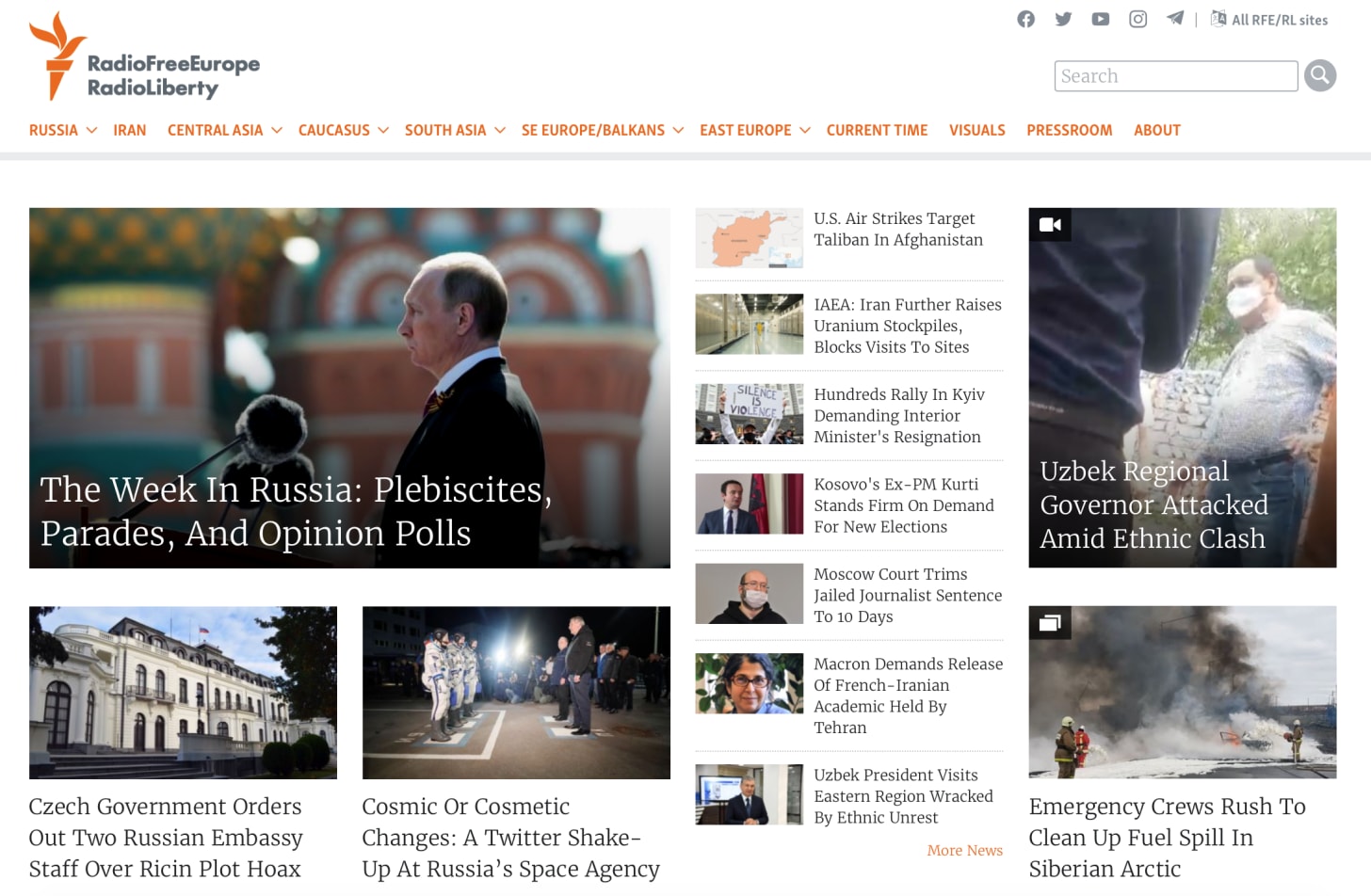 Now compare it to other state-funded media. For example, here’s Germany’s Deutsche Welle — also for June 5: 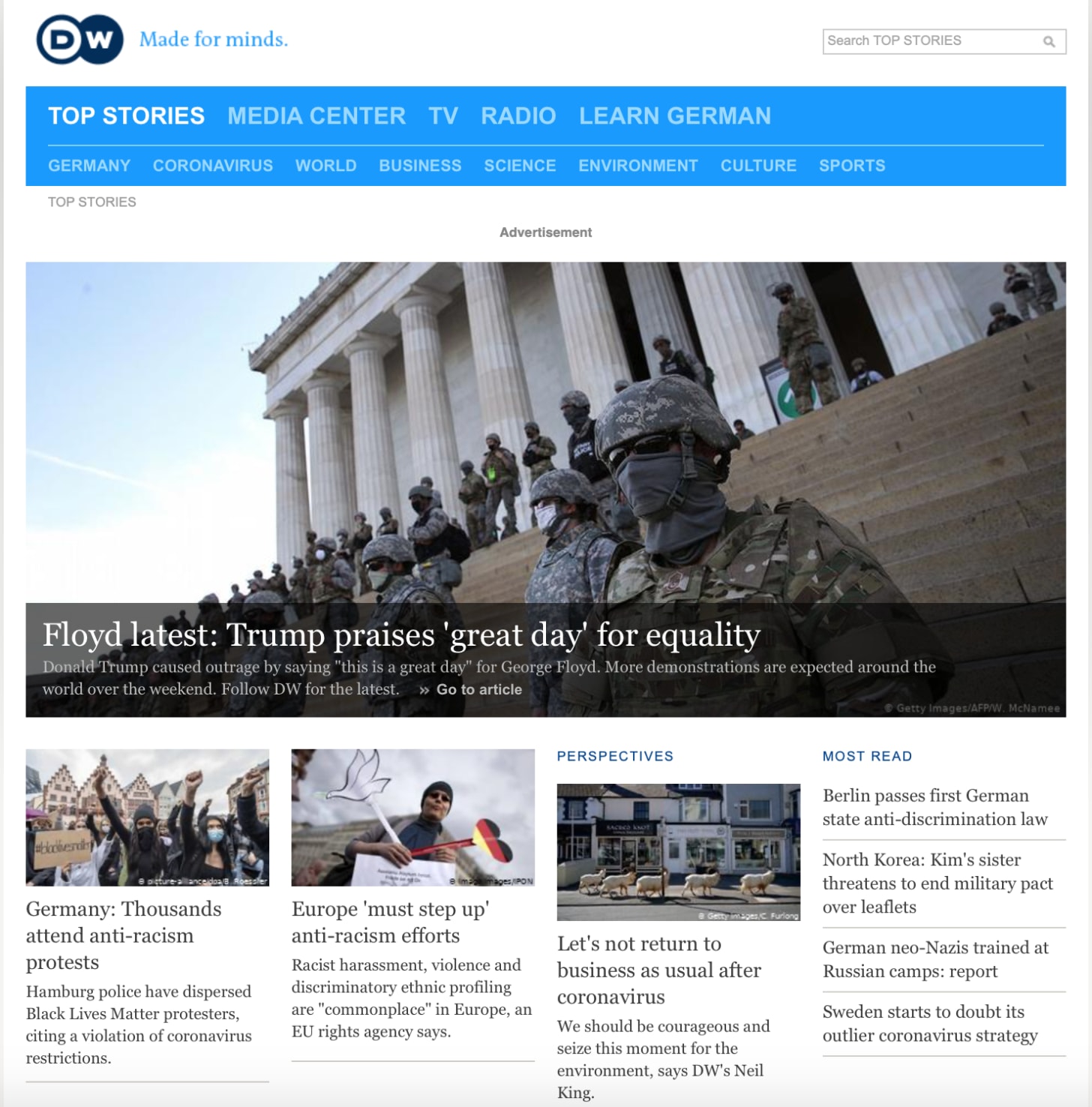 And the BBC for the same day: 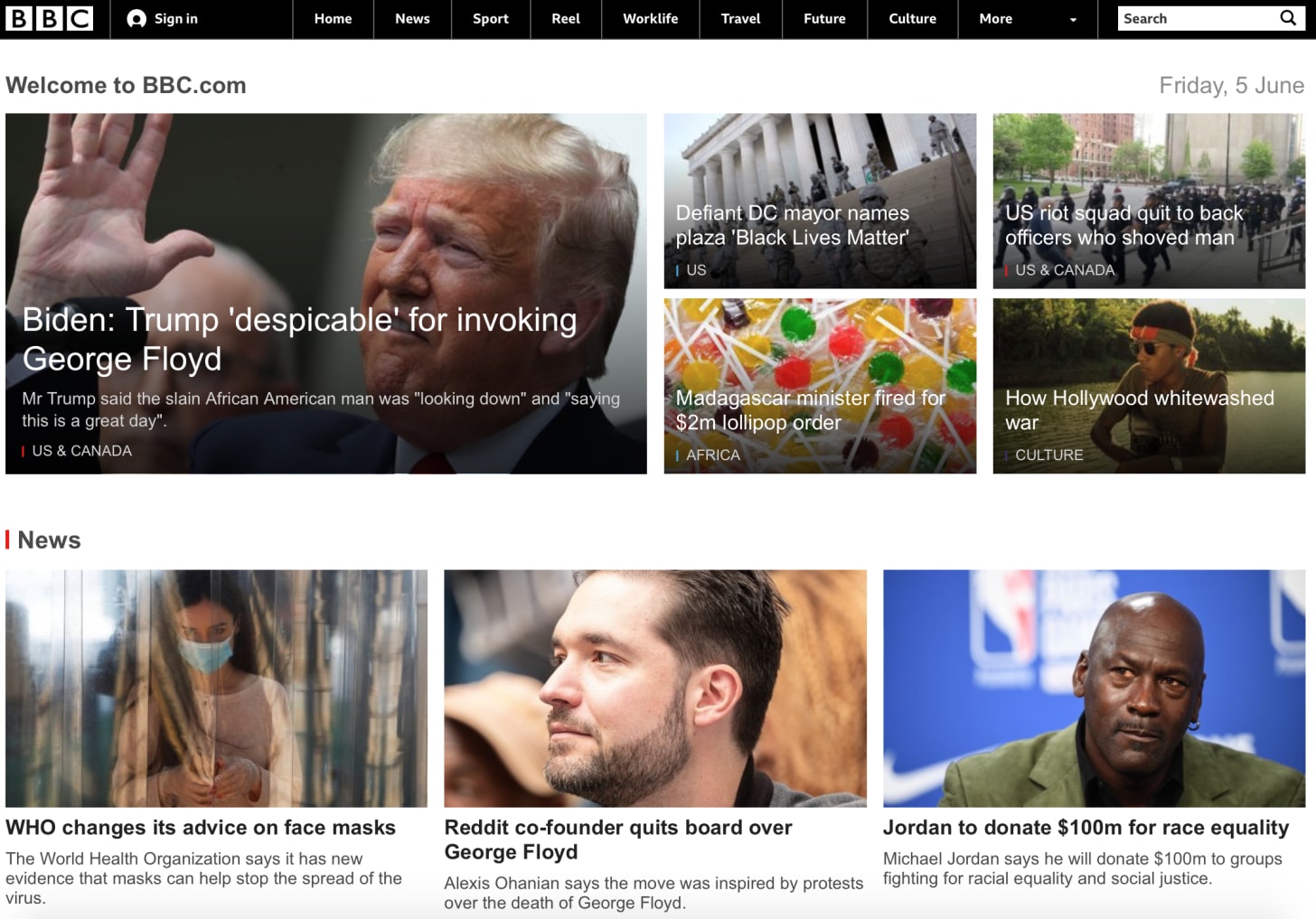 It’s hard not to notice a difference: Both the BBC and Deutsche Welle carry multiple front-page stories about the protests, while there is absolutely nothing on America’s premier regime propaganda outlet.

With a budget that hovers around $100 million, RFE/RL broadcasts to something like to 22 countries in 26 languages. And the same censorship regime extends to just about every RFE/RL language division.

I’ve looked at about a dozen of them. Most have no coverage of the protests at all. A couple — like the Russian and Afghanistan division — do have a tiny protest stories, but they are given very little attention.

In the case of RFE/RL’s Russian coverage, the protests are presented from the most reactionary perspective possible: denying racism and blaming the violence on organized armed anarchist communist groups — aka Antifa.

On the whole, these protests are not treated as the major political event that they are, and the police violence appears to be majorly downplayed all across the board.

All this isn’t that surprising.

These outlets started in the early 1950s as covert psychological warfare and espionage ops run out of Europe by the CIA. They employed a whole army of immigrants — Nazi collaborators, anti-communists, fascists, prisoners of war — and were explicitly set up to inflame and weaponize nationalism against communism and the Soviet Union.

After they were exposed in a series of reports in the late 1960s and early 1970s, there was a weak movement to shut these propaganda ops down completely — an effort driven by Senator J. William Fulbright. But instead of getting canned, the went “legit” and were expanded.

In 1972, Senator Fulbright wanted to shut down America's government-fnded propaganda radio stations RFE/RL: "I submit that these radios should be given an opportunity to take their rightful place in the graveyard of cold?war relics."

They weren't shut down, but expanded.

In the 1970s, RFE/RL came out of the shadows and began operating in the open, with funding annually appropriated Congress.

From then on, RFE/RL was supposed to get more professional and objective. And they frequently were. (Well, aside from the glorification of fascists, anti-Semites, and Nazi collabos.) I personally know people who work there and they’re good journalists.

Still, this regime media outfit has stayed true to its original purpose: to promote the interests of American Empire. And the bloody police repression of protesters taking place in cities all across the USA right now really fucks with its central ideological and rhetorical weapon.

It’s hard to sell America as a shining example of civil liberties and human rights and orderly democracy when the internet is drowning in pics of killer cops and soldiers beating down on anyone in sight. So, the censorship is really not that hard to get!

The LAPD shot a homeless man in a wheelchair in the face. pic.twitter.com/sYXy1eKONJ

This article is from The GrayZone and first appeared on the author’s newsletter, Immigrants as a Weapon.