To achieve the changes we need, people must stay in the streets and connect the problems we face to the demand for systemic changes, write Kevin Zeese and Margaret Flowers.

The nationwide uprising sparked by the murder of George Floyd and other recent racially-motivated events is a response to the bi-partisan failed state in which we live. It comes in the midst of the Covid-19 pandemic and the largest economic collapse in the U.S. in more than a century. These three crises have disproportionately impacted people of color and added to long-term racial inequality and injustice.

Black Lives Matter erupted six years ago when a police officer shot and killed Mike Brown in Ferguson, Missouri. Since that time, police have murdered approximately 1,100 people every year. The response of the government at all levels to the crisis of police killings has been virtually nonexistent. While people seek to avenge the death of George Floyd, the problems are much deeper and the changes needed are much broader.

Root Of Problem Is Failed State

During the pandemic, millionaires and billionaires have been bailed out by the government with trillions of dollars while working people were given a pittance of $1,200 per person and a short-term increase in unemployment benefits for the more than 40 million people who have lost their jobs. Many workers who provide essential services have had to continue to work putting themselves and their communities at risk.

Urgently needed healthcare is out of reach for millions with no or skimpy health insurance resulting in people dying at home or not going to the hospital until their illness became serious. For this and other reasons, Covid-19 is disproportionately impacting communities of color.

Glen Ford of Black Agenda Report puts the mass revolt in the context of the long history of white supremacy that has existed since Africans were brought to the United States. Chattel slavery was enforced by the earliest form of policing, with the first formal slave patrol created in the Carolina colonies in 1704. After the Civil War and a brief period of Reconstruction where African people could participate in civic life, Jim Crow followed with white racists, often allied with Southern police, inflicting terrorism against the Black population through lynchings and other means. Black people were arrested for laws like vagrancy and then punished by being forced to work picking cotton or other jobs. This new form of slavery continues as inmates are forced to work for virtually no pay in prisons, are leased out to dangerous jobs like meat processing, or are used as scabs.

George Floyd’s murder enraged people who have seen too many deaths as a result of police violence. The murder in broad daylight with cameras filming and scores of witnesses showed the impunity of police who are used to not being held accountable for their violence. During the uprising, police have used extreme violence and targeted people with cameras and the media even saying they were the problem.

The root of the problem is a failed state that does not represent the people and has a deep history of racism and inequality that are being magnified by the current crises. The failure to respond to these crises is resulting in an ungovernable country as the social contract has been broken.

Lawlessness among the wealth class, corruption of politicians by campaigns financed by the wealthiest with payoffs to their children and relatives has set the stage for no respect for the law. As one protester exclaimed, “Don’t talk to us about looting, you are the looters. You have been looting from black people. You looted from the Native Americans. Don’t talk to us about violence, you taught us violence.” 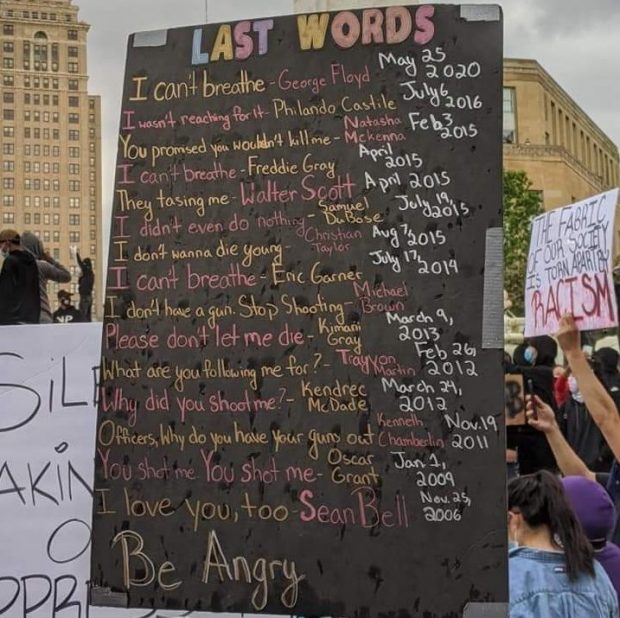 The Failed State Cannot Reform Itself

George Floyd’s final words, “I can’t breathe,” echoed the same words of Eric Garner, who was killed six years ago by a New York police officer. Although there were protests then, not much has changed. The system failed to respond.

Failure starts at the top. There have been years of inaction at all levels of government. The New York Times reports “The administration has largely dismantled police oversight efforts, curbing the use of federal consent decrees to overhaul local police departments. Mr. Barr has said that communities that criticize law enforcement may not deserve police protection, and Mr. Trump has encouraged officers not to be ‘too nice’ in handling suspects.”

Trump poured gasoline on the current fire with incendiary rhetoric promising “looting leads to shooting” echoing racists of the past and promising to send in the U.S. military if Democrats can’t stop the uprising. Trump has put the military on alert to deploy to civilian protests. He maintains power by dividing people; praising armed protesters who demanded that the economy reopen despite the pandemic and calling unarmed protesters against police violence “thugs.”

Both Republicans and Democrats are responsible for the current rebellion. Joe Biden has described himself as a “law and order” Democrat from the beginning of his career. He was the primary architect of the federal mass incarceration of black people and helped add hundreds of thousands of police with militarized equipment to urban communities. He courts police unions that defend killer cops. And Biden opposed the integration of schools. 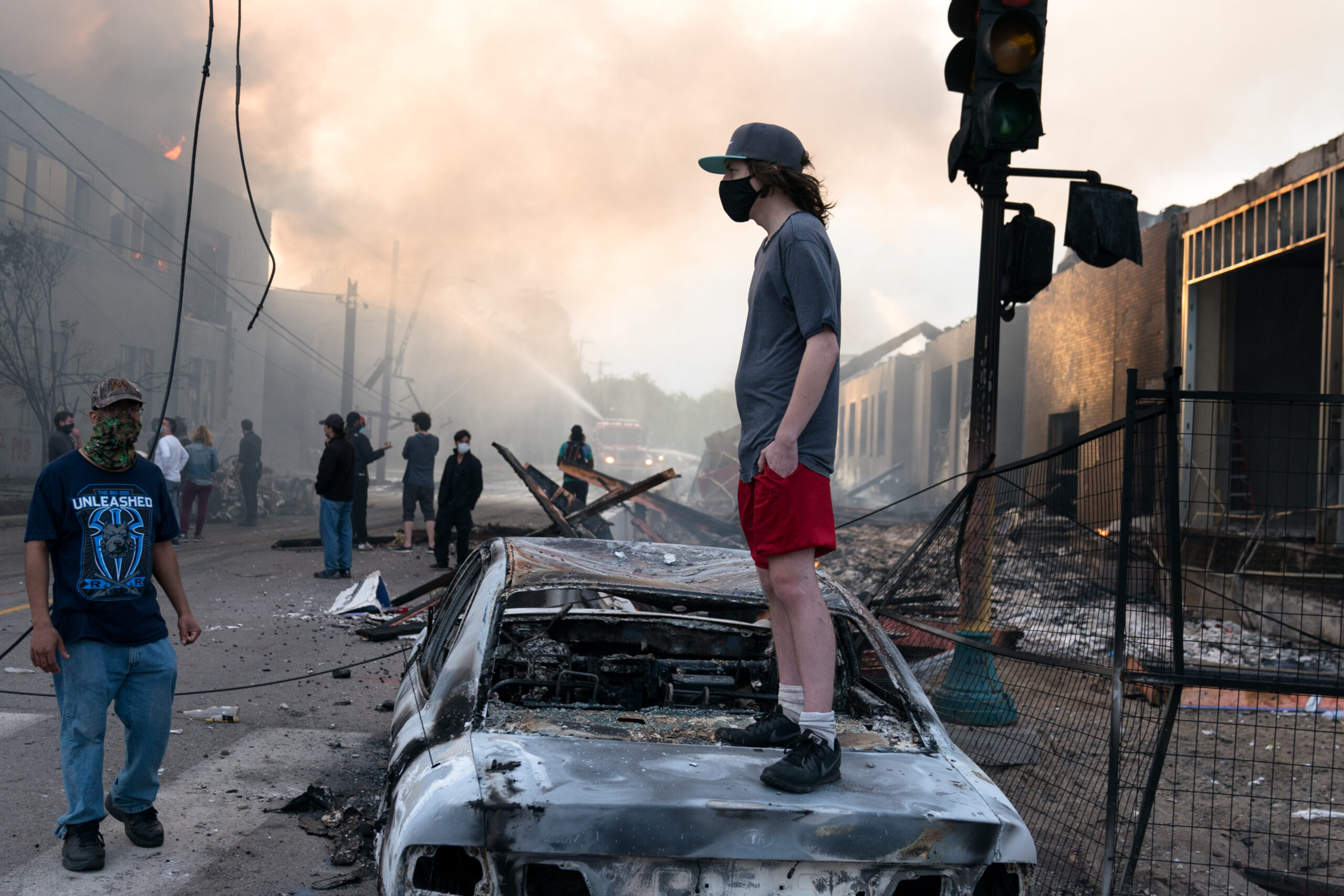 The failure of leadership continues at the state and local levels with politicians closely tied to the Fraternal Order of Police, which aggressively defends police who kill civilians. Every city can point to a series of police killings with no prosecutions or acquittals and few convictions. Minneapolis has a long history of race-based police violence. Indeed, violence against indigenous peoples led to the formation of the American Indian Movement.  The Intercept summarizes some of the cases:

Protests have led to some changes but they haven’t solved the problem. Money has been spent on body cameras, which have rarely had any impact. Similarly, training on de-escalation and racial sensitivity has made little difference.

Over the last six years, cities have increased funding for police departments at the expense of health, education and other underfunded urban programs. Rather than providing people with necessities, the government has relied on controlling neglected communities with an occupying police force. Some of the police are even trained by the Israeli occupiers.

Even in the midst of a pandemic and economic collapse, the government cannot give people access to healthcare, protect their jobs, suspend their rents or control food prices. As Rosa Miriam Elizalde writes in her comparison of the United States to Cuba, the difference is a matter of values. The United States government spends more than 60 percent of the discretionary budget on weapons and war. It should be no surprise that the government acted more quickly to suppress people with militarized police, thousands of National Guard troops, and curfews than it did to protect their lives when the pandemic and recession started.

Reform Is Not Enough 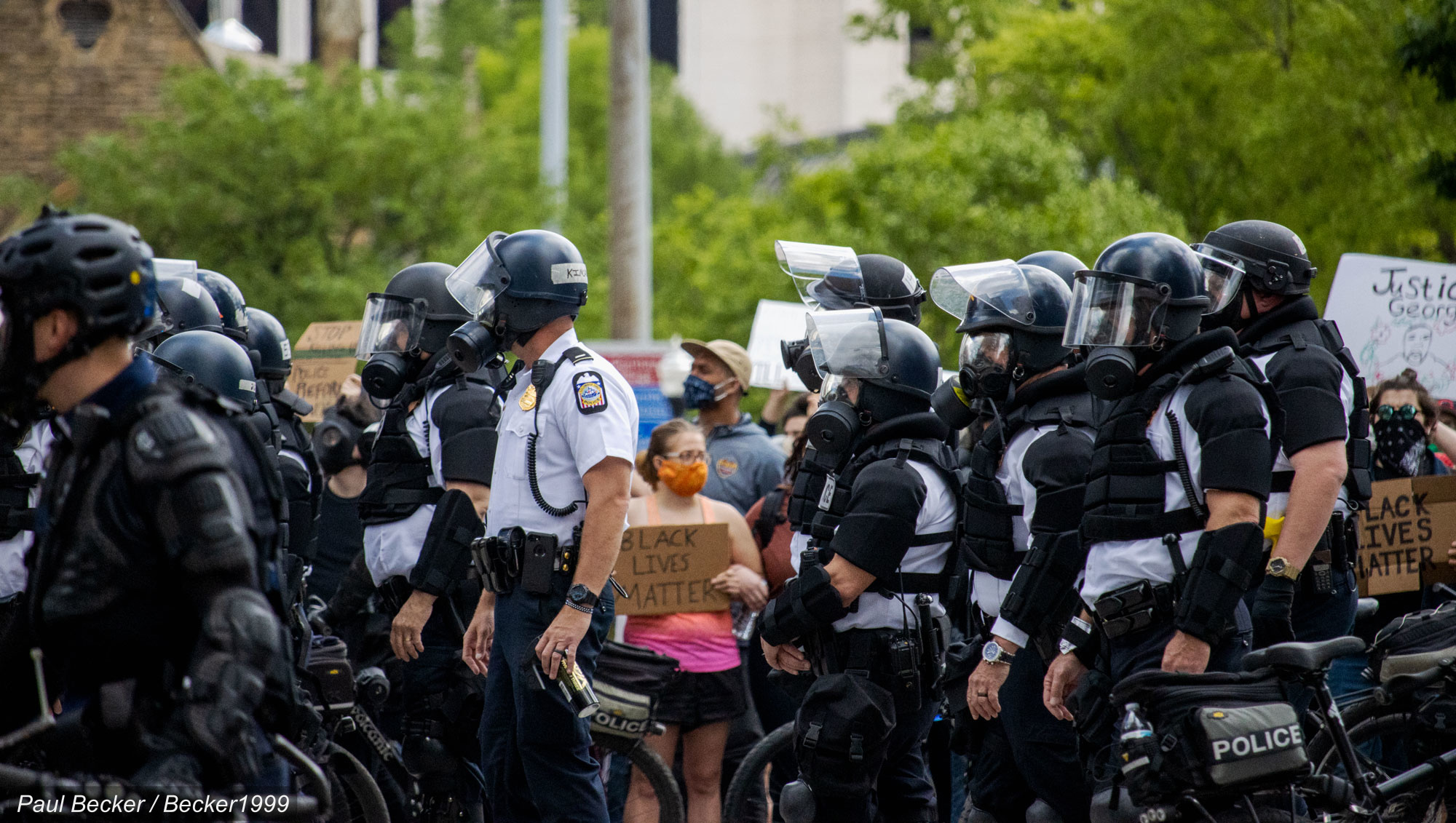 The country must look more deeply at policing. Retired police major, Neill Franklin, the executive director of the Law Enforcement Action Partnership told The Intercept, “We need a new paradigm of policing in the United States. It needs to be completely dismantled and reconstructed, not changing a policy here or there.”

The Minneapolis group, Reclaim the Block, wrote a statement calling on the city council to defund the police department. Last week, they made four demands of their city council:

This is an agenda that makes sense for cities across the country. A growing movement demands the defunding of police departments. It is evident that the way to reduce police violence is to fund alternative non-law enforcement approaches to conflict resolution, safety strategies, and mental health as well as investing in neglected communities.

Another growing movement calls for democratic community control of the police where communities elect a Civilian Police Accountability Council (CPAC). The critical difference between this and Civilian Police Boards is that the Accountability Council is democratically elected not appointed by the police chief or politicians who are allied with the police. Neill Franklin urges a national database of officers terminated for misconduct so they will not be hired by other police departments.

The New York Times reports that “in 2012, the civilian board in Minneapolis was replaced by an agency called the Office of Police Conduct Review. Since then, more than 2,600 misconduct complaints have been filed by members of the public, but only 12 have resulted in an officer being disciplined.”  The most severe censure was only a 40-hour suspension. Derek Chauvin, who killed George Floyd, has at least 17 misconduct complaints, none of which derailed his career, in nearly two decades with the Minneapolis Police Department.

Chauvin was involved in the fatal shooting in October 2006 when Senator Amy Klobuchar was Minneapolis’ district attorney. Rather than prosecuting Chauvin, she sent the case to a grand jury that declined to indict Chauvin. In 2011, Chauvin was involved in a high-profile shooting of a Native American. He was placed on administrative leave but was reinstated to the force when no charges were brought. If democratic community control of the police were in place, it is highly likely Chauvin would have been removed as a police officer and George Floyd would still be alive.

Support for change is growing. Bus drivers refused to transport arrested protesters for the police in Minneapolis and New York. Payday Report wrote transit union leaders nationwide are instructing members not to cooperate with police in arresting protesters. And universities are dropping their contracts with the Minneapolis Police Department.

Protests continue nationwide. Thus far escalating police violence and the use of the National Guard has failed to stop them. The government may use the military, although by law there are restrictions on that. There will be efforts to pacify the protests by political leaders and non-profits who will try to take over the leadership. These must be rejected.

To achieve the changes we need, people must stay in the streets and connect the problems we face to the demand for systemic changes. We will need to support each other as many are doing by distributing food and providing medical care, jail support and legal representation. We urge people to meet in assemblies to discuss what their goals are, their vision of how communities could be organized differently and what actions they can take.  We need to build confidence in each other that we can work together for the future we want. That is how we will get there.

This article is from PopularResistance.org.

← UPRISING: Militarization Has Fostered a Police Culture That Sets Up Protesters as ‘The Enemy’
RAY McGOVERN: US-Russia Ties, from Heyday to MayDay →