A robust schedule of military maneuvers and exercises is either underway or planned for Europe and the Pacific this year, with more in store for 2021, Ann Wright reports.

During the pandemic the U.S. military is running the largest maritime military maneuvers in the world, with Rim of the Pacific (RIMPAC) coming to the waters off Hawaii Aug. 17-31, bringing 26 nations, 25,000 military personnel, up to 50 ships and submarines and hundreds of aircraft.

Hawaii hasstringent measures to combat the spread of Covid-19, with a mandatory 14-day quarantine for all persons arriving in the state; returning residents as well as visitors. This quarantine is required until at least June 30, 2020.

The U.S. Army is also pursuing a 6,000-person war game in Poland, June 5-19, with a Polish airborne operation and a U.S.-Polish division-size river crossing.

If these weren’t too many military operations during an epidemic in which personnel on 40 U.S. Navy ships have come down with the hyper-contagious virus and during which military personnel and their families have been told not to travel, plans are also underway  for a U.S. Army division-sized exercise in the Indo-Pacific region  in less than a year.  Known as Defender 2021, the U.S. Army has requested $364 million to conduct the war exercises throughout Asian and Pacific countries.

The pivot to the Pacific, begun under the Obama administration, and maintained by the Trump administration, is reflected in a U.S. National Defense Strategy (NDS) that sees the world as “a great power competition rather than counterterrorism and has formulated its strategy to confront China as a long-term, strategic competitor.”

Earlier in May, the U.S. Navy sent at least seven submarines, including all four Guam-based attack submarines, several Hawaii-based ships and the San Diego-based USS Alexandria to the western Pacific in what the Pacific Fleet Submarine Force announced as simultaneous “contingency response operations” for all of its forward-deployed subs. This was all in support of the Pentagon’s “free and open Indo-Pacific ” policy — aimed at countering China’s expansionism in the South China Sea — and as a show of force to counter ideas that the capabilities of U.S. Navy forces have been reduced by Covid-19. 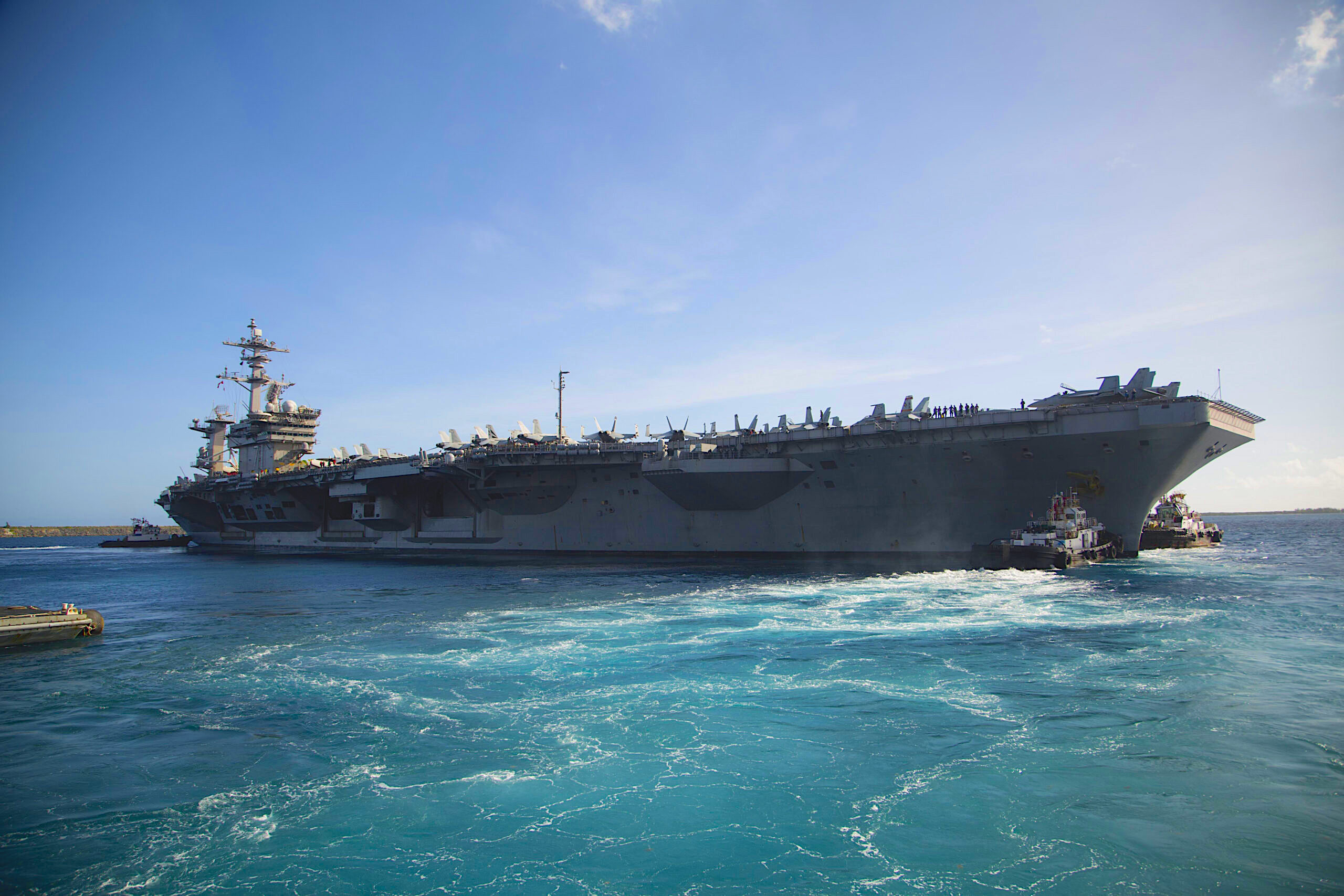 The U.S. military force structure in the Pacific will be changed to meet the National Defense Strategy’s perceived threat from China, beginning with the U.S. Marine Corps creating new infantry battalions that will be smaller to support naval expeditionary warfare and designed to support a fighting concept known as expeditionary advanced base operations.

U.S. Marine forces will be decentralized and distributed across the Pacific on islands or floating barge bases. As the Marine Corps eliminates much of its traditional equipment and  units, the Marines plan to invest in long-range precision fires, reconnaissance and unmanned systems, doubling the number of unmanned squadrons.

To effect this change in strategy, Marine infantry battalions will go down to 21 from 24; artillery batteries will go to five down from two; amphibious vehicle companies will be reduced from six to four’ and F-35B and F-35C Lightning II fighter squadrons will have fewer aircraft per unit, from 16 aircraft down to 10. The Marine Corps will eliminate its law-enforcement battalions, its units that build bridges and will reduce the service personnel by 12,000 in 10 years.

A Hawaii-based unit called a “Marine Littoral Regiment”  is expected to have 1,800 to 2,000 Marines taken from the three infantry battalions based at Kaneohe Marine Base. Most of the companies and firing batteries that will make up a littoral anti-air battalion will come from units not currently stationed in Hawaii.

The U.S. military war games in Europe, “Defender Europe 2020,” is already underway with troops and equipment arriving at European ports. It will cost about $340 million, which is roughly in line with what the U.S. Army is requesting for fiscal year 2021, which begins Oct. 1, for the Pacific version of the Defender series of war maneuvers.

It will take place at Drawsko Pomorskie Training Area in northwest Poland. More than 6,000 U.S. and Polish soldiers will participate the exercise, named Allied Spirit.  It was originally scheduled for May, and is linked with Defender-Europe 2020, the Army’s largest exercise in Europe in decades. Defender-Europe was largely canceled because of the pandemic. 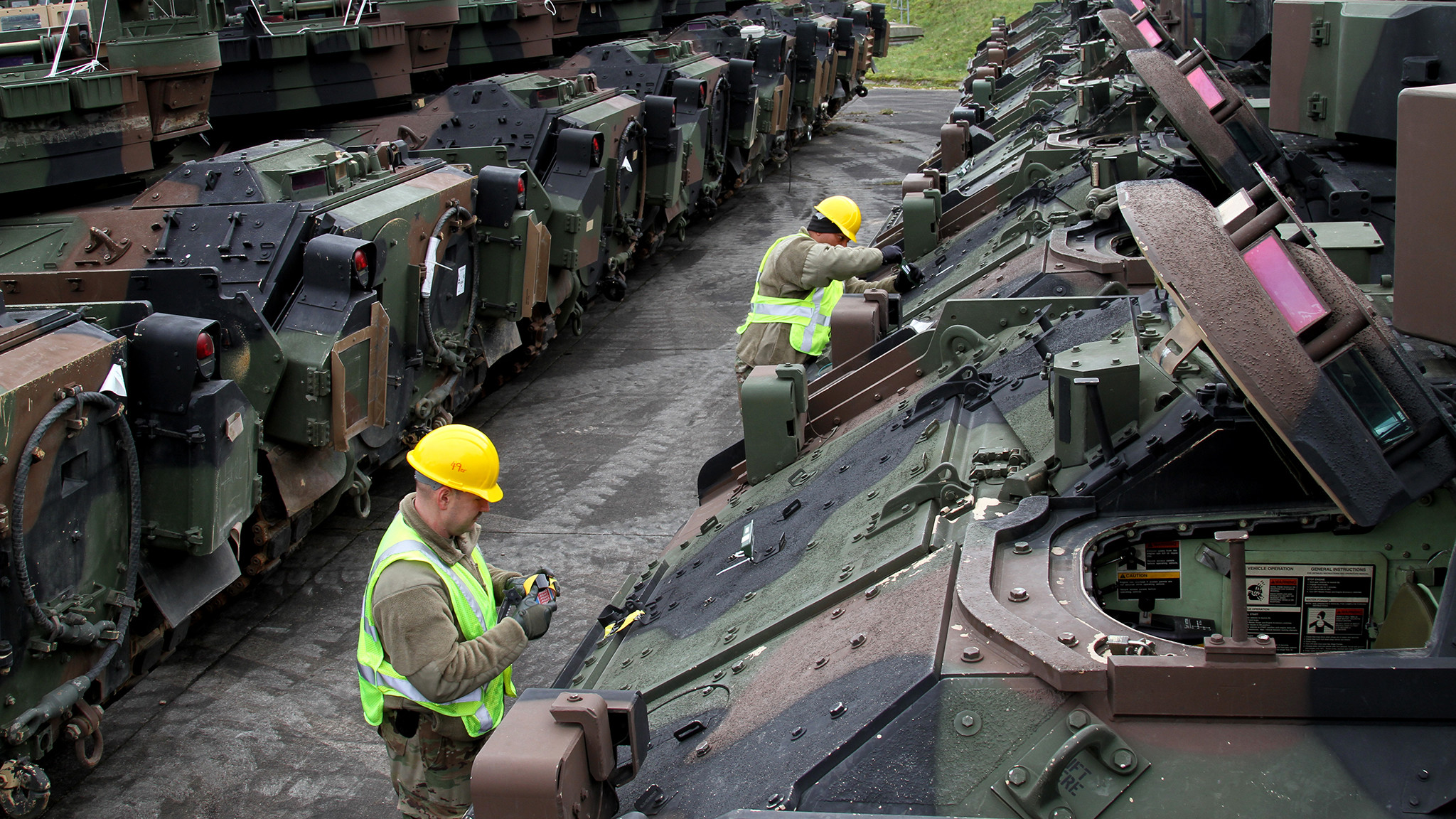 U.S. Army Reserve soldiers check vehicles once they arrive to Fallingbostel, outside of Bergen-Hohne, Germany, in preparation for DEFENDER-Europe 20 on Feb. 8, 2020. (Dod, Joseph Bush)

U.S. Army Europe is planning additional exercises over the coming months focusing on training objectives originally outlined for Defender-Europe, including working with equipment from pre-positioned stocks in Europe and conducting airborne operations in the Balkans and Black Sea region.

In the current 2020 fiscal year, ending Sept. 30, the Army will conduct a smaller version of Defender Pacific while Defender Europe will get more investment and focus. But then attention and dollars will swing over to the Pacific in fiscal-year 2021.  Defender Europe will be scaled back next year. The Army is requesting just $150 million to conduct the exercise in Europe, according to the Army.

The U.S. military has 85,000 troops permanently stationed in the Indo-Pacific region and is expanding its longstanding series of exercises called  Pacific Pathways by extending the time Army units are in countries in Asia and the Pacific, including in the Philippines, Thailand,  Malaysia, Indonesia and Brunei.  A division headquarters and several brigades would have a South China Sea scenario where they will be around the South China Sea and the East China Sea over the course of a 30- to 45-day period.

In 2019, under the Pacific Pathways exercises,  U.S. Army units were in Thailand for three months and four months in the Philippines. The U.S. Army  is in discussions with the Indian government about expanding military exercises from roughly just a few hundred personnel up to 2,500 for a duration of up to six months — which “gives us a presence in the region longer as well without being permanently there,” according to the U.S. Army of the Pacific commanding general.  Breaking from the larger exercise, smaller U.S. Army units will deploy to countries such as Palau and Fiji to participate in exercises or other training events.

In May, 2020, the Australian government announced that a delayed six-month rotation of 2,500 U.S. Marines to a military base in Australia’s northern city of Darwin will go ahead based on strict adherence to Covid-19 measures including a 14-day quarantine. The Marines had been scheduled to arrive in April but their arrival was postponed in March because of the pandemic.

The remote Northern Territory, which had recorded just 30 Covid-19 cases, closed its borders to international and interstate visitors in March, and any arrivals must now undergo mandatory quarantine for 14 days.  U.S. Marine deployments to Australia began in 2012 with 250 personnel and have grown to 2,500.

The Joint U.S. Defense facility Pine Gap— the U.S. Department of Defense, Five Eyes and CIA surveillance facility that pinpoints airstrikes around the world and targets nuclear weapons, among other military and intelligence tasks — was also adapting its policy and procedures to comply with Australian government COVID restrictions.

As the U.S. military expands its presence in Asia and the Pacific, one place it will NOT be returning to is Wuhan, China.  In October 2019, the Pentagon sent 17 teams with more than 280 athletes and other staff members to the Military World Games in Wuhan. Over 100 nations sent a total of 10,000 military personnel to the games in Wuhan last October.

The presence of a large U.S. military contingent in Wuhan just months before the outbreak of the Covid-19 in Wuhan in December 2019, fueled a theory by some Chinese officials that the U.S. military was somehow involved in the outbreak, which now has been used by the Trump administration and its allies in Congress and the media that the Chinese deliberately used the virus to infect the world and adding justification for the U.S. military build-up in the Pacific region.

← COVID-19: China Rises in Ranks of US-Accused Hackers
For a Full Year of Consortium News, Consider Donating the Price of a Single Copy of the Sunday New York Times →

10 comments for “COVID-19: US Military Pursues War Games Amid Contagion”