As the 75th anniversary of  World War II’s end is marked on Friday, few Americans know the Soviet Union’s major role in that victory, making them vulnerable to today’s anti-Russian messaging. 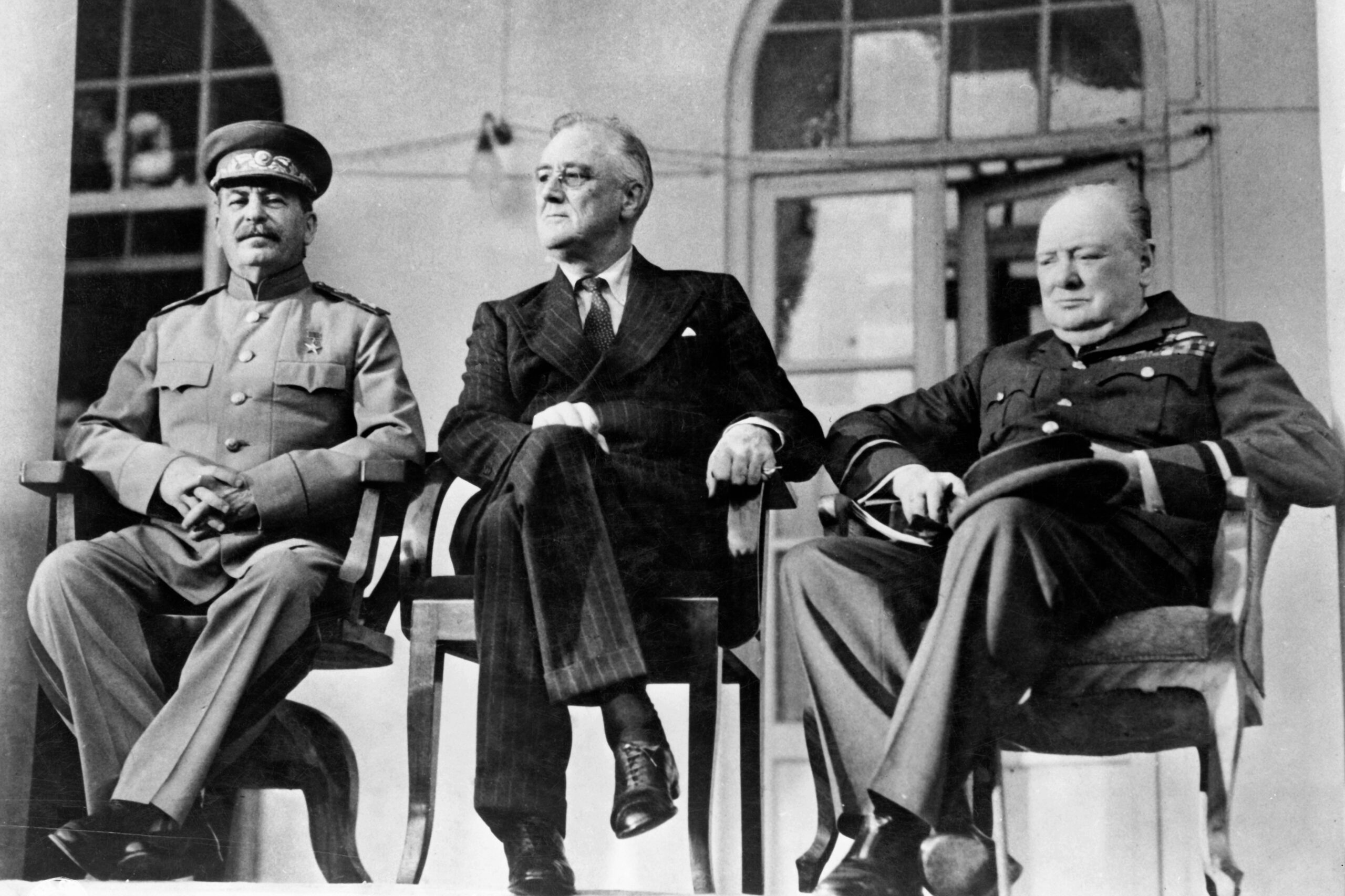 From left to right: Joseph Stalin, Franklin D. Roosevelt, and Winston Churchill on the portico of the Soviet Embassy during the Tehran Conference. (Wikimedia Commons) .

Announcing Germany’s surrender and the end of war in Europe 75 years ago on May 8, 1945, British Prime Minister Winston Churchill was quick to acknowledge the vital role played by the Soviet Union in the Allied victory over Germany: “Today, perhaps, we shall think mostly of ourselves. Tomorrow we shall pay a particular tribute to our Russian comrades, whose prowess in the field has been one of the grand contributions to the general victory.”

Churchill was more colloquial when he addressed the House of Commons in October 1944, stating that the Soviets had “torn the guts out of the filthy Nazis.”  More than 80 percent of the German soldiers killed in World War II died fighting the Red Army.

The Soviets forced the Germans to retreat long before Allied troops invaded Normandy — a reality that today would surprise many Americans.  Before Normandy, the U.S. and Britain were providing the Soviets with key logistical and other support.  But it was the Soviet army that held off and decimated several of the Wehrmacht’s strongest divisions.

While it may stun those who still read the Kremlin-baiting Washington Post, it was still possible five years ago to place in that august newspaper an “other-side-of-the-story” article describing who actually did the heavy lifting to defeat the Nazis.

(Less stunningly, what Churchill called the “grand contributions to the general victory” were reviewed last year in an informal discussion among members of Veteran Intelligence Professionals for Sanity.)

From ‘Growing Trust’ to Very Little

War was averted when the Russians persuaded Assad to give up Syria’s chemical weapons. The stockpiles were eventually destroyed under UN supervision aboard a U.S. ship in the Atlantic outfitted for chemical weapons destruction. The neocons’ outrage at Moscow’s thwarting of their effort to mousetrap Obama into an overt attack on Syria knew no bounds. 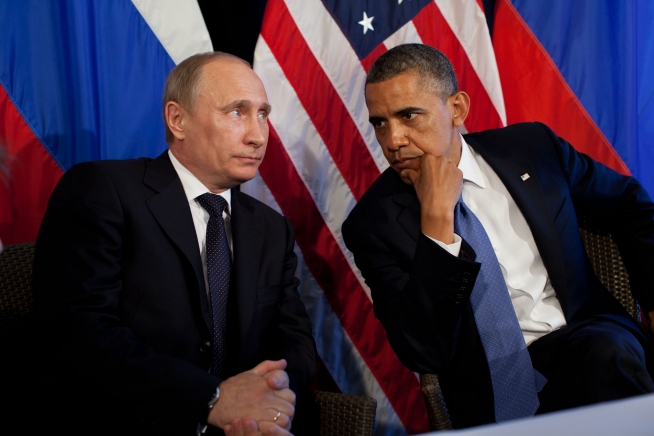 It was a modicum of trust between Obama and Putin that produced that agreement with Syria on Sept. 9, 2013. Two days later, The New York Times ran an op-ed by Putin in which he said that the tumultuous events of the previous few weeks in Syria had “prompted me to speak directly to the American people and their political leaders. It is important to do so at a time of insufficient communication between our societies.”

Putin argued against a U.S. attack on Syria, a position which was still being advocated passionately by Kerry and many neocons.

Regarding the sarin attack of Aug. 21, 2013, which led to Syria giving up its chemical stocks and avoiding a direct U.S. military intervention, Putin wrote:

“No one doubts that poison gas was used in Syria. But there is every reason to believe it was used not by the Syrian Army, but by opposition forces, to provoke intervention by their powerful foreign patrons. …

I welcome the president’s [Obama’s] interest in continuing the dialogue with Russia on Syria. We must work together to keep this hope alive, as we agreed to at the Group of 8 meeting in Lough Erne in Northern Ireland in June, and steer the discussion back toward negotiations.

If we can avoid force against Syria, this will improve the atmosphere in international affairs and strengthen mutual trust. It will be our shared success and open the door to cooperation on other critical issues.”

Putin would echo these words in his offer to the U.S. at the UN General Assembly in September 2015 to jointly intervene in Syria with air strikes against the Islamic State. He invoked the World War II alliance between the Soviet Union and the West to confront a greater threat than each other. “Similar to the anti-Hitler coalition, it could unite a broad range of parties willing to stand firm against those who, just like the Nazis, sow evil and hatred of humankind,” Putin said.

It was an offer the Obama administration would reject. [See: ‘Obama’s Self-Deceit’ republished today.]

‘Exceptionalism’ — the Fly in the Ointment

Putin ended his Times op-ed by saying that, “My working and personal relationship with President Obama is marked by growing trust.”  But then came the caveat:

“I would rather disagree with the case he made [in an earlier speech] on American exceptionalism, stating that the United States’ policy is ‘what makes America different. It’s what makes us exceptional.’  It is extremely dangerous to encourage people to see themselves as exceptional, whatever the motivation.  There are big countries and small countries, rich and poor, those with long democratic traditions and those still finding their way to democracy.  Their policies differ too.  We are all different, but when we ask for the Lord’s blessings, we must not forget that God created us equal.”

At the time, a reliable source told me that Putin had penned that last paragraph himself. Corroboration of a kind came much later, during an unusually comprehensive interview that Putin gave TASS in late February 2020:

Andrey Vandenko (interviewer): “… you did not get along with Obama.  Did somebody put you at odds with him?”

President Putin:“No, it has nothing to do with ‘being at odds’. It’s just that, when a person says that ‘the US is an exceptional nation, with special, exclusive rights in the world, I cannot agree. God created us all equal and gave us equal rights. So, I think it is absolutely ungrounded to say that some people should have exclusive rights to anything.”

Vandenko:“On a scale from one to five, not to make it too complicated, how would you rate Russia’s current relationship with the US?”

Putin:“I would give it a three.”

Putin:“Between a two and a three. More like a three though. Look … we do cooperate on counter-terrorism. …”

Prospects for a Thaw

The joint statement last month of Trump and Putin commemorating the 75th anniversary of the meeting of U.S. and Soviet forces on the Elbe two weeks before the end of WWII provided a glimmer of hope of improvement in relations between Washington and Moscow.

But Putin probably harbors few illusions that any basic improvement in ties is likely.  He and his Kremlin colleagues view Trump as beholden to advisers who, whether they truly believe the U.S. is “exceptional” or not, need an enemy to “justify” obscene amounts of spending on the instruments of war.

The corporate-controlled mainstream media have become a cornerstone of the Military-Industrial-Congressional-Intelligence-Media-Academia-Think-Tank complex, MICIMATT, if you will.

As long as the media echoes inanities from former intelligence chiefs like James Clapper (“Russians typically are almost genetically driven to co-opt, penetrate, gain favor, whatever, which is a typical Russian technique … it’s in their DNA”), and politicians like Nancy Pelosi (“All roads lead to Putin”), the arms profiteers and congressional recipients of their largesse have little to fear.

Throw in the professed views of folks like Rep. Jason Crow (D, CO), who fears that “Putin wakes up every morning and goes to bed every night trying to figure out how to destroy American democracy,” and not many Americans will question U.S. “defense” spending amounting to more than ten times what Moscow allocates for arms.

My nurse friend’s question will go begging: “Why warplanes and not ventilators?”

Ray McGovern works with Tell the Word, a publishing arm of the ecumenical Church of the Saviour in inner-city Washington.  During his 27-year career as a CIA analyst, he led the Soviet Foreign Policy Branch and prepared The President’s Daily Brief for three of the seven presidents under whom he served.  He is a member of Veteran Intelligence Professionals for Sanity (VIPS).

31 comments for “RAY McGOVERN: Once We Were Allies; Then Came MICIMATT”