Mona Ali Khalil says Austrian authorities have moved quickly to contain the virus and extend free services to everyone, including refugees and migrant workers. 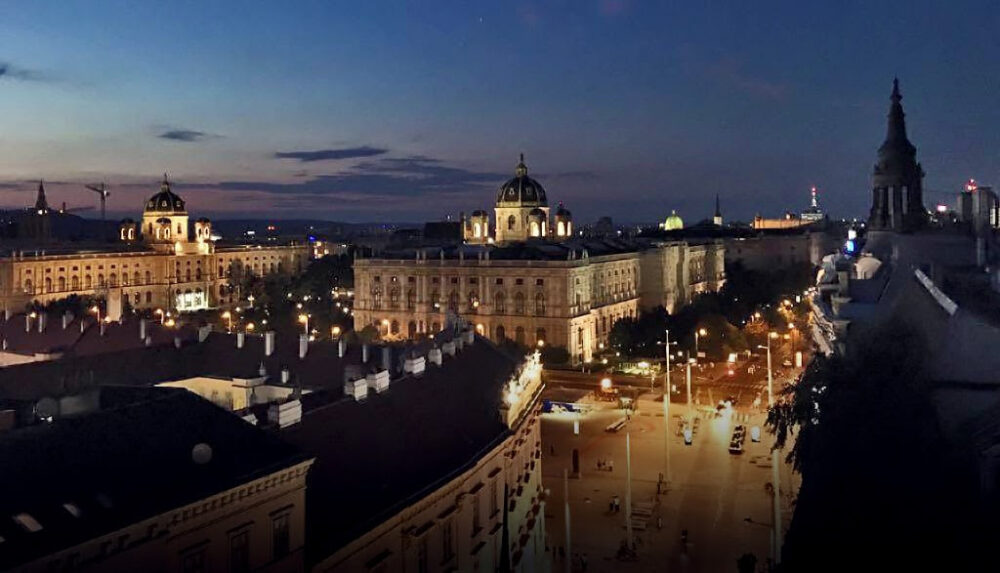 A view of Vienna from the author’s terrace. (Mona Ali Khalil)

Since moving to Austria in 2018, I have enjoyed the comparably high standard of living and relatively low cost of living that the city offers. As a foreigner, I feel at home in this beautiful city, which is also home to the United Nations Office on Drugs and Crime, the International Atomic Energy Agency, the Organization for Security Cooperation in Europe and the Organization of Petroleum Exporting Countries, among other intergovernmental groups.

In 2018 and 2019, Vienna topped the Economist’s Global Liveability Index, earning the title of the world’s most livable city two years in a row. The ranking is the result of The Economist’s analysis of the stability, health care, culture, environment and infrastructure of 140 cities. I did not really understand the full meaning of the phrase “most livable,” however, until the Covid-19 crisis struck.

Bearing in mind that Italy’s population is six times greater than Austria’s population, the toll in Italy has been far greater than six times the toll in Austria so far. The first case in neighboring Italy was reported on Jan. 29. By Feb. 24, when the first case was confirmed in Austria, Italy had 124 confirmed cases and 2 confirmed deaths. As of April 9, Italy had more than 140,000 cases and more than 18,000 deaths, while Austria had fewer than 15,000 cases and less than 300 dead. Italy is thankfully beginning to climb down its steep curve just as Austria, thanks to the measures taken by its federal and local authorities in the past six weeks, seems to have succeeded in flattening its own curve.

Within days of the news of the rapid spread of the virus in Europe, the Austrian authorities issued a travel advisory. On March 10, they closed the border to all but emergency travel to or from Italy. On March 11, they closed schools. By March 15, they closed its other borders, with Croatia, Czech Republic, Germany, Hungary and Switzerland. On March 16, they issued a stay-at-home order and deployed police and imposed administrative penalties to enforce it. By March 17, everything was closed except essential services, food markets and pharmacies.

The Austrian authorities established a nationwide hotline for anyone who showed any of the tell-tale symptoms of the virus. Most of the people who call the hotline are told to self-isolate for 14 days at home and to call back if the symptoms get worse. Those who report advanced symptoms and anyone with whom they had been in contact are immediately visited and tested by agents in hazmat suits and, if necessary, escorted to a hospital where they are quarantined and treated. These measures are available to anyone in the country, including refugees and migrant workers.

The City of Vienna, with about 2 million people, set up other hotlines, such as one to answer questions about the virus and related measures; and another one, even more important, to set up daily delivery of food and medicine to older people and others who need help during the crisis. The fact that these hotlines exist is not unique — the fact that they are always accessible and immediately responsive is extraordinary.

In record time, the Austrian government and parliament incrementally approved $40 billion of financial aid and tax relief. The package includes monthly grants to cover the cost of living for people who are suffering economic losses as a result of the crisis — not only for Austrian citizens but also for refugees and documented workers. The Chamber of Commerce is impressively processing requests for assistance within 24 hours of application.

Here in Vienna, as I watch the daily updates on the status of the sick, the dead and the recovering around the world, I find the forecasts of the magnitude of the potential loss of life — globally and regionally — to be staggering. My heart and mind cannot even fathom what it would be like for the poor of the world. Last week, the UN General Assembly stepped up to meet this moment in human history, and adopted a resolution calling for “intensified international cooperation to contain, mitigate and defeat the pandemic.”

The Security Council was missing in action until Thursday, when it held a closed videoconference to discuss its response to the Covid-19 crisis for the first time.

Nations Must Come Together

While our survival right now requires us as individuals to stay apart, it demands that nations come together to combat the spread and socioeconomic impacts of a virus that does not distinguish between borders and does not discriminate on the basis of nationality, ethnic origin, race, faith, gender or class.

Needless to stay, I am one of the lucky ones. I have the luxury of feeling safe and being grateful. I am safe from the fear of getting sick alone or of losing work. I am grateful for the knowledge that if I do, I have free access to medical care and prompt financial help to cover my basic needs. From my terrace, I can see my city and hear its church bells. I don’t miss the frenzy that defined my status quo ante, and for the time being I am enjoying my own company — reading, dancing and painting, for the first time in a long time. I feel a strange peacefulness despite my powerlessness in this moment of crisis. I am even more determined to live — not just to be alive.

After being home alone for four weeks, I am missing my family and friends and loving them even more than I did a month ago.

Just yesterday, April 8, the Austrian Chancellor, Sebastian Kurz, announced what many people are calling a light at the end of the tunnel. He set out a phased plan to cautiously lift restrictions, starting by reopening small stores and parks on April 14; bigger stores and malls on May 1; and restaurants and cafes by May 15. Each step depends on the success of the previous one and the population’s compliance with the remaining restrictions, including keeping a distance and wearing masks.

Thanks to the efficiency and professionalism of Austria’s federal and city officials; thanks to the bravery and dedication of its doctors and nurses; and thanks to the courage and commitment of Vienna’s grocers, pharmacists and delivery servicepeople, I am grateful to live in the world’s most livable city — every day and especially these days.

Mona Ali Khalil is an internationally recognized public international lawyer with 25 years of UN and other global experience in peacekeeping, sanctions, disarmament and counterterrorism. She holds a B.A. and an M.A. from Harvard University and a master’s degree in foreign service and a juris doctorate from Georgetown University. She is an affiliate of the Harvard Law School Program on International Law and Armed Conflict and is a former senior legal officer in the UN Office of the Legal Counsel. In January 2018, Khalil founded MAKLAW.ORG, an international legal advisory and consulting service, assisting governments and intergovernmental organizations on securing their rights and fulfilling their legal obligations.

5 comments for “COVID-19: Living Through the Pandemic in World’s Most Livable City”