Ben Norton reports on comments by Lula da Silva that have been ignored by English-language media. 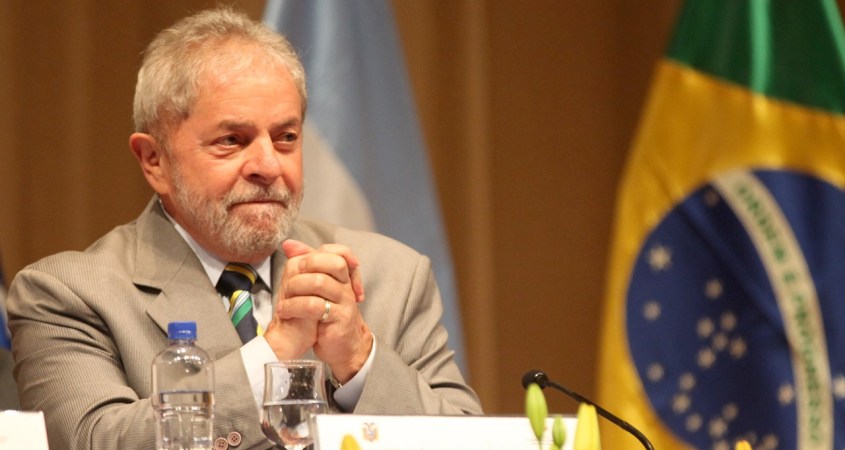 The far-right government of Brazilian President Jair Bolsonaro is one of Washington’s closest allies in Latin America. It has played a major supporting role in the Trump administration’s coup attempt against Venezuela, even supporting a terror plot against the government of President Nicolás Maduro.

Days before the deal was finalized, however, Brazil’s former president, the left-wing labor organizer Lula da Silva, spoke out vociferously against U.S. meddling in Latin America, harshly criticizing Washington’s putsch against Evo Morales in Bolivia and its ongoing coup attempt against Venezuela.

In an interview with Brazilian media that has yet to be covered in the English-language press, Lula condemned U.S.-backed Venezuelan coup leader Juan Guaidó as a warmongering criminal who should be in prison. He went on to emphasize that President Nicolás Maduro is a democratically elected leader who has encouraged peace and diplomacy.

“Europe and the United States can’t recognize a fraud who declares himself to be president,” Lula said, referring to Guaidó. “It is not right. Because if fashion takes over democracy, it is thrown in the garbage, and any scammer can declare themself president. I could declare myself president of Brazil, but where would democracy go?”

Lula was interviewed by Folha de S.Paulo, the most widely circulated Brazilian newspaper, which is owned by an elite family of billionaire media oligarchs.

When the paper pushed back against his comments, calling Maduro a “dictator,” Lula stressed that the Venezuelan president was elected, and has shown the kind of patience and restraint that no other leader would in similar circumstances.

“He [Guaidó] should be in prison,” Lula said. “And Maduro was so democratic and did not arrest him when he went to Colombia to try to instigate an invasion of Venezuela.”

“The one who is taking the initiative to talk is Maduro, not Guaidó,” Lula stated. “Guaidó would like the Americans to invade Venezuela — in fact, he even tried to force it.”

The newspaper pushed back again, saying Maduro has presided over an economic crisis in Venezuela.

“Whether his government is doing well or not, that’s another story. But you aren’t going to attack all of the countries that aren’t doing well,” Lula responded.

These remarks from Lula received virtually no coverage in the English-language press, although they were widely covered in Portuguese- and Spanish-language media.

The Brazilian paper also pushed Lula to denounce Bolivian President Evo Morales, who was overthrown in a U.S.-backed far-right military coup in November 2019.

Folha de S.Paulo noted that Morales had run for a fourth term as president, although the paper failed to mention that Bolivia’s Supreme Court permitted him to do so.

In the first round of the October 2019 election, Morales won with more than a 10 percent margin.

The newspaper falsely claimed that there were irregularities in the election — a myth initially spread by the Organization of American States (OAS) that has subsequently been debunked by numerous investigations by top scholars.

Lula defended Morales and his government against the newspaper’s claims that the Bolivian election was marred by supposed “complications.”

“Wasn’t George Bush complicated in his election against Al Gore? It was complicated, Bush took control of the government for eight years,” Lula replied.

“Was Trump not complicated? It was complicated, and he took power,” he said.

“Was Bolsonaro not complicated? Everyone knows the farce of ‘fake news.’”

US Coups Usher Extreme-Right into Power in Brazil

Remarks like these illustrate why Washington has backed coups and meddled in Brazil’s internal politics in order to overthrow Lula and his left-wing Workers’ Party and prevent them from returning to power.

Lula has not only been one of the most popular politicians in Brazil, he represents a regional buffer against U.S. hegemony. When he left office in 2010, after completing his second term as head of state, he had a staggering 87 percent approval rating — one of the highest in the entire world.

Lula’s successor from the Workers’ Party, President Dilma Rousseff, was ousted in 2016 in a parliamentary coup led by Brazil’s right-wing opposition and a collection of oligarchs that was backed behind the scenes by the United States.

Lula has repeatedly stressed that Washington played a decisive role in the coups in Brazil. “Everything that is happening has the hand of the United States on it,” he said in a 2019 interview.

“The U.S. created the Lava Jato investigation,” Lula added, referring to the supposed “anti-corruption” operation that was used to oust the Workers’ Party and install the far-right administration of Jair Bolsonaro, an extremist who has called for restoring the military dictatorship.

In 2018, Lula was campaigning again for the presidential election, and leading the polls by a huge margin. It was only then that he was imprisoned on false charges of corruption, providing an opening for Bolsonaro to take power.

The judge who oversaw Lava Jato and imprisoned Lula, Sergio Moro, was subsequently rewarded by Bolsonaro with a post as minister of justice.

“No Brazilian president had ever paid a visit to the CIA,” commented Celso Amorim, who served as Foreign Minister under Lula. “This is an explicitly submissive position. Nothing compares to this.”

8 comments for “Brazil’s Ex-President on Venezuela: Maduro is Democratic, Guaidó Should Be in Prison, US Blockade Kills Civilians”