UPDATED: Washington’s indictment of Maduro and members of his inner circle has  backfired and could lead to the arrest of coup leader Juan Guaidó, reports Leonardo Flores.

Editor’s Update:  On Wednesday the U.S. announced it was sending a naval force to the Caribbean supposedly to combat drug trafficking coming from Venezuela. As this piece points out, relatively little drug traffic passes through Venezuela, raising concerns about what the force’s true mission is. In an article written for L’Antidiplomatico on Saturday, Pino Arlacchi, the former executive director of the UN’s  Office for Drug Control and Crime Prevention , wrote:

“I was also dumbfounded because I have been dealing with anti-drugs for forty years, and I have never met Venezuela along my way. Before, during and after my position as UNODC Executive Director (1997-2002), the UN drug program, I have never had the opportunity to visit that country because Venezuela has always been outside the major traffic circuits. of cocaine between Colombia, the main country, producer, and the USA, the main consumer.

Only in the sick fantasy of Trump and associates is there any illegal narcotic trade between Venezuela and the United States. Just consult the two most important sources on the subject, the latest UNODC report on drugs, and the latest document from the DEA, the American drug police, dated December 2019.”

The U.S. Navy is dispatching ships to protect Americans from narco-terrorists taking advantage of the coronavirus crisis. 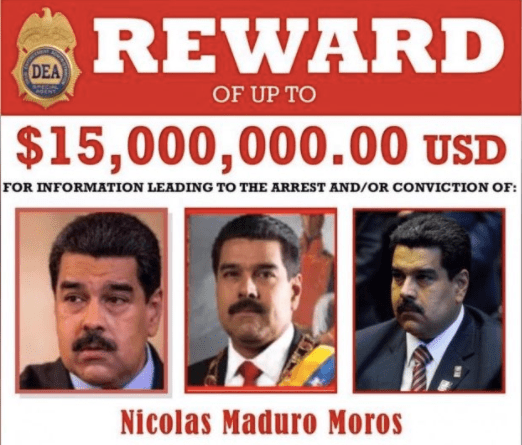 By Leonardo Flores
The Grayzone

For 20 years, right wing extremists in Miami and Washington have been slandering the Venezuelan government, accusing it of drug trafficking and harboring terrorists without offering even a shred of evidence.

The item at the top of their wishlist was fulfilled on March 26, when the U.S. Department of Justice unveiled indictments against President Nicolás Maduro and 13 other current or former members of Venezuela’s government and military.

The indictment has backfired already. Hours after the announcement, Alcalá posted videos online that threaten to cause further splits in the opposition and exposed a violent plot that could result in the arrest of Juan Guaidó. Before going into those details, however, it’s important to understand just how politically biased the charges are against Maduro et al. 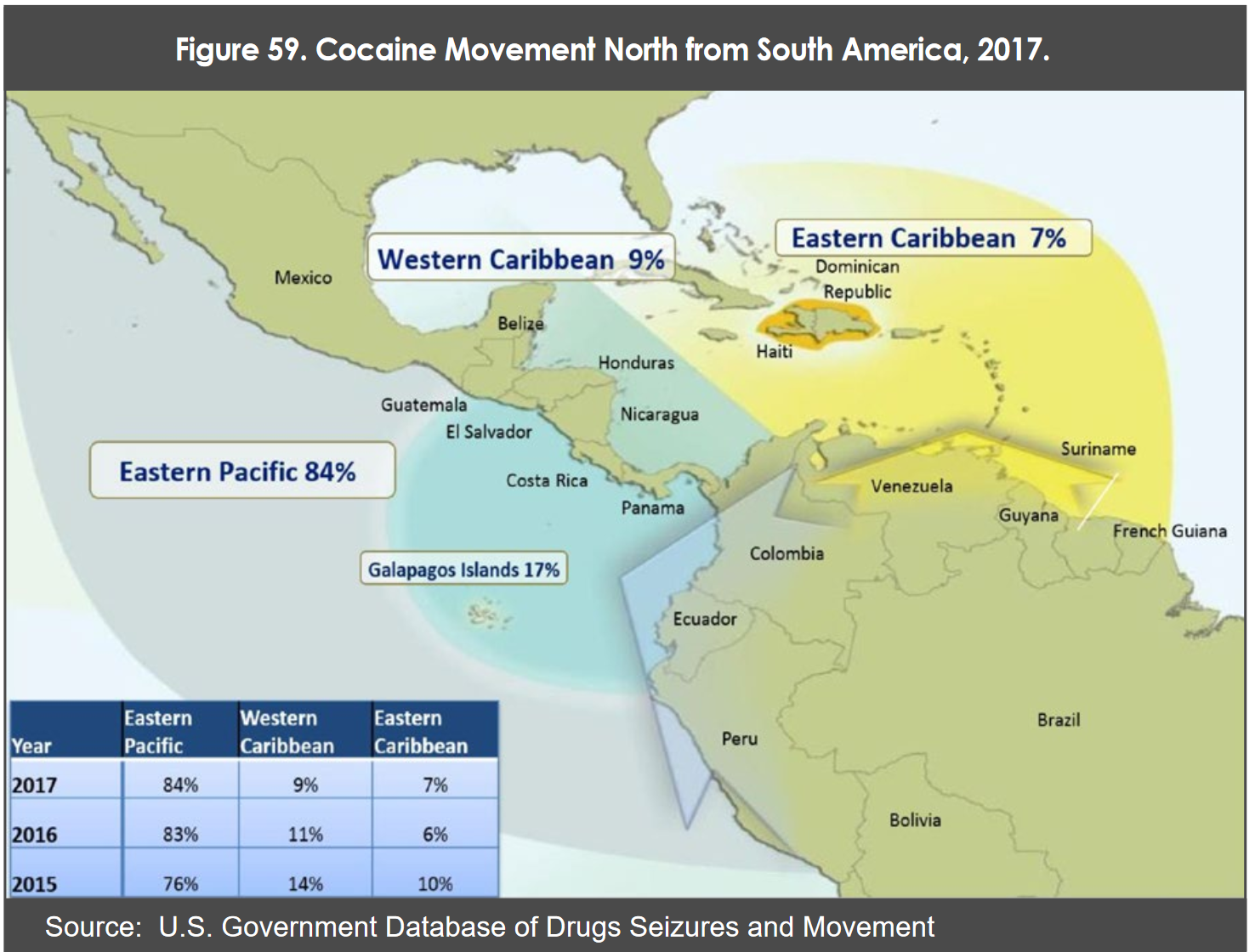 The myth that Venezuela is a narco-state has already been debunked by the Washington Office in Latin America (WOLA), a think tank in Washington that generally supports U.S. regime change operations in the region, as well as by FAIR, 15 y Último, Misión Verdad, Venezuelanalysis and others. It cannot be denied that Venezuela is a transit country for cocaine, but as the maps above and below show, less than 7 percent of total drug movement from South America transits from Venezuela (the Eastern Caribbean region includes Colombia’s Guajira Peninsula). These maps, produced by the Drug Enforcement Agency and U.S. Southern Command, respectively, immediately raise questions as to why Venezuela is the country being targeted. 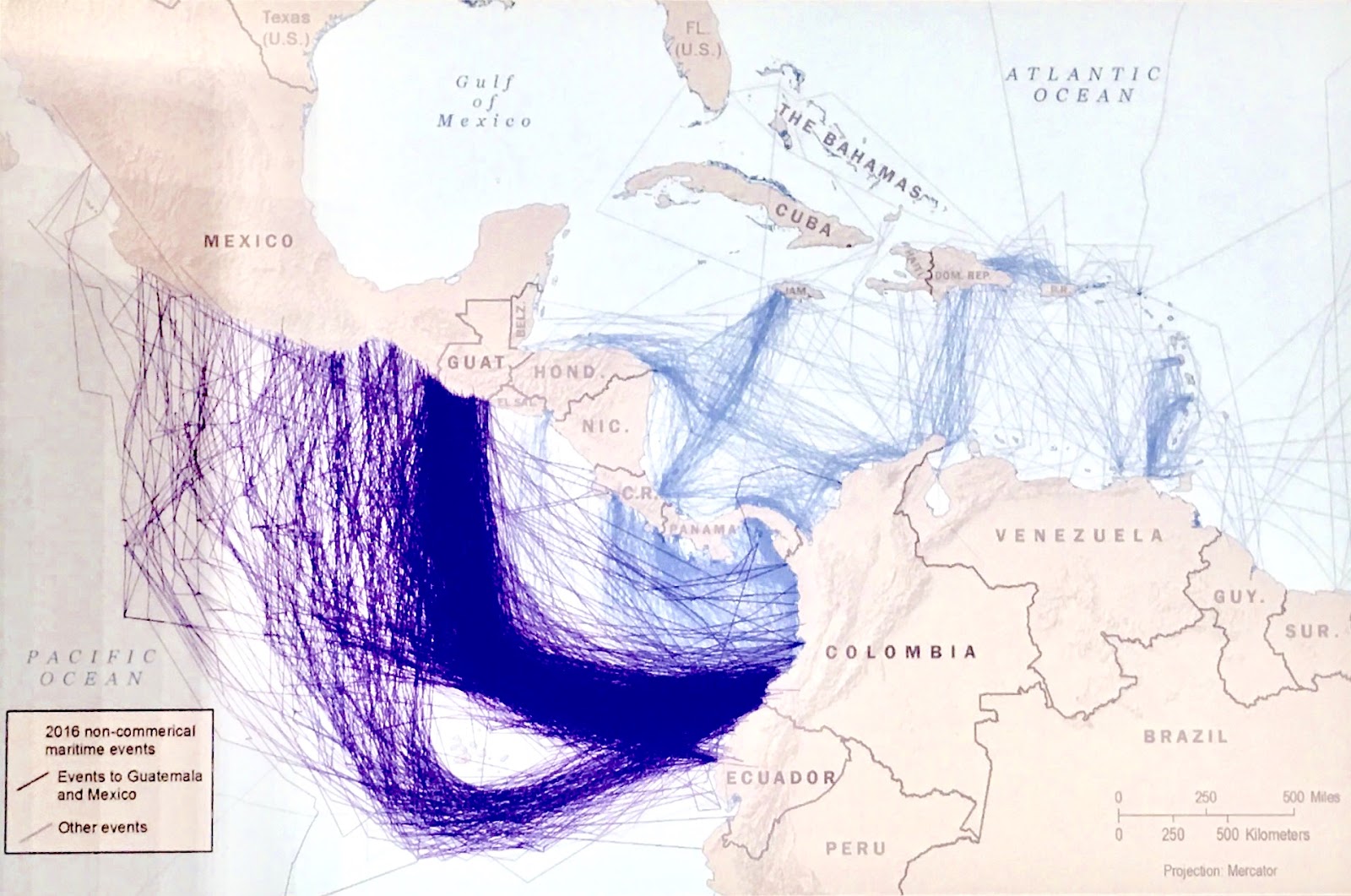 Of course, the charges have nothing to do with the drug trade; they are the latest escalation in the Trump administration’s “maximum pressure March.” The pretext is an alleged plot by the Venezuelan government to flood the United States with “somewhere between 200-250 metric tons of cocaine.” Although that figure might seem high, it’s important to understand the context. The United States is the world’s biggest consumer of cocaine and Colombia is the world’s biggest producer. On the other hand, Venezuela does not cultivate coca, does not produce cocaine and, according to the U.S. government’s own figures, less than 10 percent of global cocaine traffic transits through the country.

For the sake of comparison, the U.S. agencies that provided Barr with the figure of “200-250 tons” also say that an average of nearly 2,400 tons of cocaine flowed through Colombia between 2016 and 2019 (Venezuela averaged 216 tons – 10 times less – in the same period). Colombia’s current president, Iván Duque, is a close ally of the country’s former president, Alvaro Uribe, who himself has been linked to drug trafficking. Almost exactly a year ago, President Donald Trump complained that “more drugs are coming out of Colombia right now than before” Duque was president, yet the U.S. continues giving millions in security aid to Colombia as part of its failed war on drugs.

The U.S double standard about narco-states is not limited to Colombia. Honduras’s U.S.-backed president, Juan Orlando Hernández, was linked to drug trafficking in a U.S. court, yet this news did not warrant a major announcement by the DOJ, presumably because Hernández is a U.S. ally. Another U.S. ally, Guatemala, had six times as much cocaine flow through its territory as Venezuela.

The indictments are another brick in the foundation for a pretext for either a direct U.S. military invasion or a proxy war using Colombian forces. There are obvious comparisons to 1989, when the U.S. put a $1 million bounty on Panamanian president Manuel Noriega, only to subsequently invade the country, causing an estimated 4,000 deaths.

The rewards the U.S. is offering for Maduro and four others are also troubling, as they have already been compared to a bounty. Maduro has survived at least one assassination attempt (in August 2018 when drones laden with explosives detonated prematurely), and the rewards could be interpreted as, at minimum, a “get out of jail free” card should someone succeed in murdering him. On the other hand, the rewards verify what the Venezuelan government has been saying all along: the U.S. is offering millions of dollars for people to turn on the country’s leadership.

Yet the Trump administration appears to have made a serious miscalculation by including the retired General Alcalá in the indictments. A former ally of ex-president Hugo Chávez, Alcalá joined the opposition in 2015 and has been linked to various coup plots and planned terror attacks since 2016. He is the highest profile former officer to turn against Maduro and is considered the “leader of pro-Guaidó military personnel.” Alcalá is now wanted both by the United States and by Venezuela.

Alcalá is implicated in a recent plot to attack the Maduro government. On March 24, Colombian authorities seized a truck full of weapons and military equipment, including 26 assault rifles, worth $500,000. Venezuelan intelligence services linked the weapons to three camps in Colombia where paramilitary groups of Venezuelan deserters and U.S. mercenaries are training to carry out attacks against Venezuela. According to Venezuela’s Communication Minister Jorge Rodríguez, these groups were planning to take advantage of the Covid-19 pandemic to attack military units and plant bombs. He also linked the groups to Alcalá.

These allegations proved to be correct, as Alcalá, in a video he posted online hours after the indictments, admitted that the weapons were under his command. He further admitted that the weapons were purchased with funds given to him by Juan Guaidó, with whom he allegedly signed a contract.  Additionally, Alcala claimed that the operation was planned by U.S. advisers, with whom he supposedly met at least seven times. Aclalá also alleged that Leopoldo López, the founder of Guaidó’s party, Voluntad Popular, who was sprung from house arrest during Guaidó’s April 30 attempted insurrection, had full knowledge of the terror plot.

As a result of these videos, Venezuela’s attorney general has opened an investigation into Juan Guaidó for an attempted coup. Despite Guaidó’s self-proclamation as president in January 2019, his attempted insurrection in April 2019, his repeated calls for sanctions and a military invasion, Venezuelan authorities had refrained from moving against him. The U.S. indictments appear to have caused the Venezuelan government to issue its strongest response to the Trump administration’s and Guaidó’s continued provocations.

Of course, if the Trump administration were truly serious about combating terror, corruption and drug trafficking, the first Venezuelan they should look at ought to be Juan Guaidó. After all, he was photographed with members of the infamous Los Rastrojos drug cartel, who allegedly helped him cross into Colombia in exchange for his turning a blind eye to the cartel’s expansion from Colombia into western Venezuela. Guaidó’s team in Colombia embezzled humanitarian aid funds and now he has been directly implicated in a terror plot, one which presumably used money given to him by the United States (as that is his only source of financing).

The US regime has put a mafia-style bounty on the head of the elected leader of Venezuela and set the stage for a Panama-style intervention.

It seeks to install Juan Guaido, an unelected marionette who has worked hand in glove with the Los Rastrojos narco gang in Colombia. pic.twitter.com/Rt5sg8oN8Q

The revelations about Guaidó’s spending of U.S. funds to buy weapons and his alleged involvement in yet another violent plot are putting pressure on opposition figures and parties that have hinted at wanting to participate in this year’s legislative elections but have yet to fully commit to dialogue. A day before the U.S. indictments were revealed, Maduro invited several of these leaders to join a dialogue in the Apostolic Nuncio (the Vatican’s embassy in Caracas) in order to try to reach consensus over the nation’s response to Covid-19. Now they are faced with the difficult choice of either angering Venezuelan voters (83 percent of whom reject a military option) by continuing to support Guaidó’s violence or angering the United States by working with indicted government officials.

The Trump administration has been sabotaging a negotiated solution to Venezuela’s problems for two years, including in February 2018, when it threatened an oil embargo and support for a coup during negotiations between the government and the opposition in the Dominican Republic, and again in August 2019, when it imposed a full embargo during another attempt at dialogue. These new indictments, which even The New York Timesdescribed as “highly unusual,” seemed timed to sabotage negotiations once again, as earlier in the week members of the moderate opposition, including National Assembly president Luis Parra, had recently urged the U.S. to lift the sanctions due to the coronavirus pandemic.

Yet another blunder with the indictments is that the Trump administration is sending contradictory messages. On the one hand, it has spent three years urging high level Venezuelan government and military officials to defect, promising space to operate politically after a transition government comes into power. On the other, it has indicted the most high-profile member of the military who has defected, Cliver Alcalá, on serious charges of narcoterrorism.

The brazenness of the indictments in attempting to cast Venezuela as a narco-state, the lack of foresight regarding possible repercussions, the attempted sabotage of dialogue and the mixed messaging are all signals that the Trump administration is desperate to ensure its regime change policy shows results. The victims of this policy are the Venezuelan people, who would be much better off with a policy of de-escalation, dialogue and a removal of the deadly sanctions.

Leonardo Flores is a Latin American policy expert and campaigner with CODEPINK.

← COVID-19: What the Virus Might Do to the American Empire
COVID-19: China Banning Trade in Wildlife in Wake of Virus →