When FDR died in 1945, Truman took over as president. Had it been Henry Wallace, history may have taken a much different course, writes Marjorie Cohn. 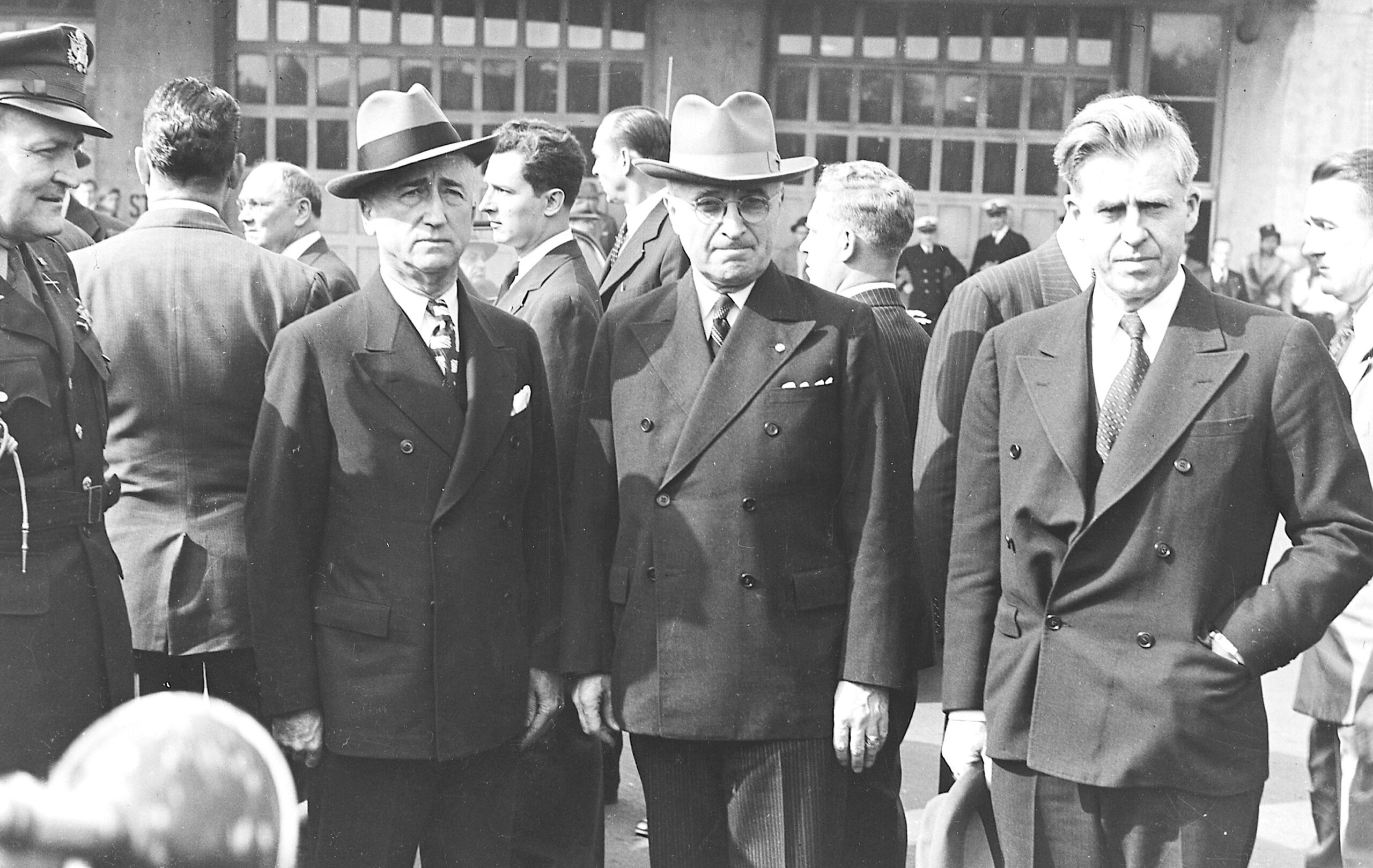 In 1944, the Democratic National Committee (DNC) ensured that socialist Henry Wallace would not succeed Franklin D. Roosevelt (FDR) as president. Is history repeating itself in 2020?

Senator Bernie Sanders, a Democratic socialist, received the most votes in the first three primary elections. After former Vice President Joe Biden, a centrist, scored his first primary win, the DNC consolidated the Democratic Party Establishment around him. Candidates Pete Buttigieg, a former mayor, and Senator Amy Klobuchar immediately dropped out of the race and endorsed Biden. Former U.S. Representative Beto O’Rourke, a former candidate, did the same. Senators Kamala Harris and Cory Booker, who had already quit the primary race, followed suit and New York City’s former Mayor Michael Bloomberg did as well. The party bosses likely wanted to ensure that Sanders would not upend the corporate order.

Wallace, who held many of the same political positions as Sanders, was one of the architects of the New Deal. He served as FDR’s agriculture secretary, vice president and commerce secretary. But the ailing FDR’s 1944 bid to select Wallace as his vice president for what would be his final presidential term was derailed by the corporate party bosses who made sure that Harry Truman would follow FDR as president instead of Wallace.

When FDR died in 1945, Truman became president. Had it been Wallace, “there might have been no atomic bombings, no nuclear arms race, and no Cold War,” Oliver Stone and Peter Kuznick wrote in “The Untold History of the United States.”

There are several parallels between Sanders and Wallace — both in their ideologies and in the opposition they engendered from the leadership of the Democratic Party. In a June 2019 speech, Sanders invoked FDR’s 1944 economic bill of rights, which proposed many policies similar to Sanders’. When he defines himself as a democratic socialist, Sanders said, he means “Economic rights are human rights.” The core of his Medicare for All plan is, “Health care is a human right.”

At the March 15 debate with Biden, Sanders asked the rhetorical question: Where is the power in America?

He then answered, “Who owns the media? Who owns the economy? Who owns the legislative process? Why do we give tax breaks to billionaires and not raise the minimum wage? Why do we pump up the oil industry while a half a million people are homeless in America?”

The debate was framed by the coronavirus pandemic, which, Sanders noted, “exposes the weakness and dysfunctionality of the health care system.” Although we spend twice as much as any other country on health care, Sanders pointed out, we aren’t ready with test kits and ventilators.

“While we work to pass a ‘Medicare for All,’ single-payer system,” Sanders said during a speech from his home in Vermont three days before the debate, “the United States government today must make it clear that in the midst of this emergency, everyone in our country, regardless of income or where they live, must be able to get all of the health care they need without costs.” 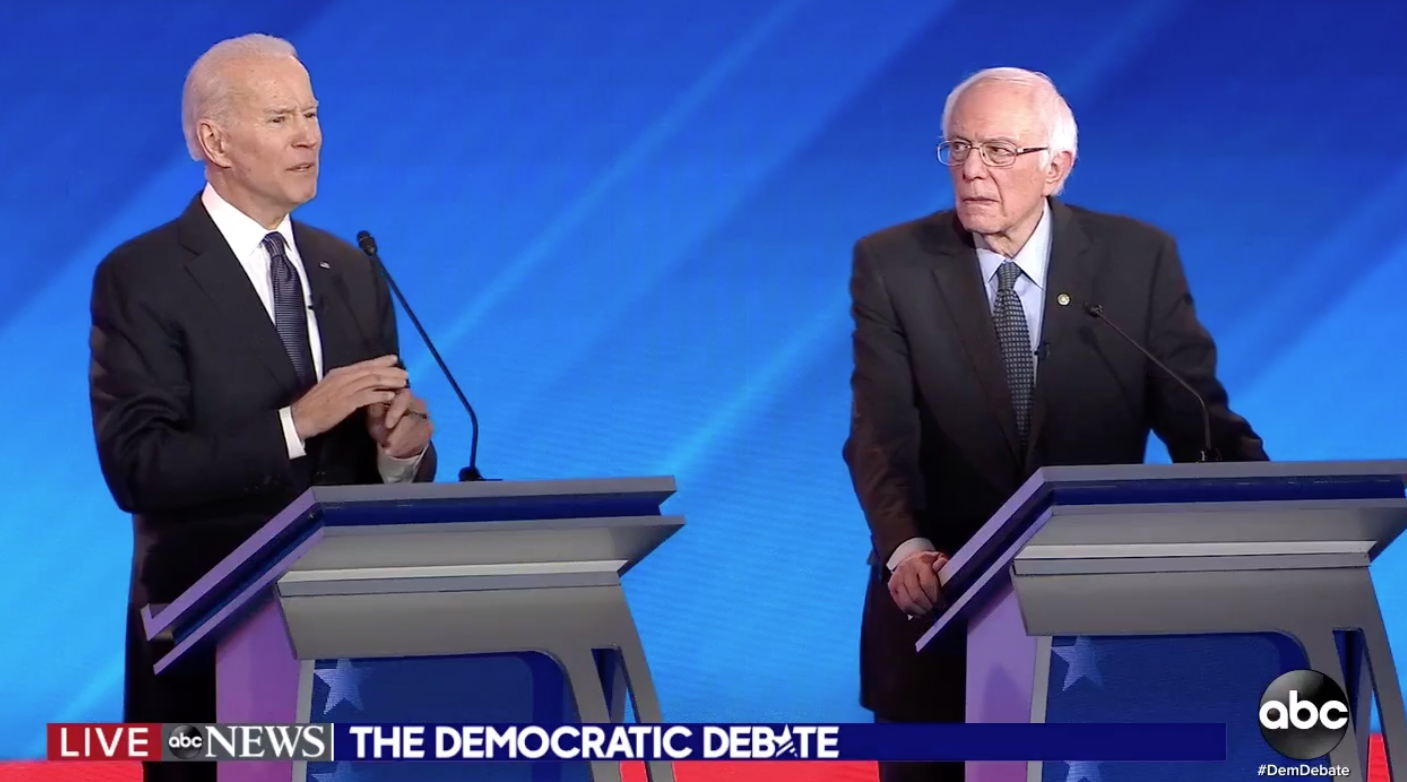 During the debate, Sanders criticized the bipartisan $8.3 billion coronavirus spending bill. It mandates temporary paid sick leave and paid family and medical leave. But, according to The New York Times, various exemptions could potentially exclude millions of workers. Moreover, the exemptions disproportionately hurt low-wage workers. And it contains no limits on the ability of the pharmaceutical companies to profit from the coronavirus. “It’s clear the fingerprints of the business lobby are all over the exclusions in the bill,” said Vicki Shabo, senior fellow at the think tank New America.

Wallace, like Sanders, was a champion of the “common man.” And that also incurred the wrath of the party conservatives.

American farmers were reeling economically from the Great Depression when FDR appointed Wallace as secretary of agriculture in 1933. During the eight years he held that office, Wallace instituted many policies that vastly improved conditions for the nation’s farmers.

“In time he widened his concern beyond commercial farming to subsistence farming and rural poverty. For the urban poor, he provided food stamps and school lunches. He instituted programs for land-use planning, soil conservation and erosion control. And always he promoted research to combat plant and animal diseases, to locate drought-resistant crops and to develop hybrid seeds in order to increase productivity.”

In addition to “his reputation as one of the New Deal visionaries on domestic policy,” Wallace “carved credentials as an outspoken antifascist,” Stone and Kuznick wrote.

When FDR ran for a third term in 1940, he chose Wallace as his running mate. As vice president, Wallace was a strong anti-imperialist — criticizing the British, German, French and American empires alike. “No nations will have the God-given right to exploit other nations . . . there must be neither military nor economic imperialism,” Wallace stated in a 1942 address.

In that speech, widely regarded as one of his most important, Wallace said, “Some have spoken of the ‘American Century.’ I say . . . the century . . . which will come of this war — can and must be the century of the common man.”

Wallace was disliked by the Democratic Party leaders, who were not happy when he called for a global “people’s revolution” and suggested that the United States should work with the Soviet Union. The party conservatives also opposed Wallace’s advocacy for workers, women, Black people and the colonized in European countries. “His enemies included Wall Street bankers and other anti-union business interests, southern segregationists, and defenders of British and French colonialism,” Stone and Kuznick explained.

When FDR ran for his fourth and final term as president, he again sought to put Wallace on the ticket. Wallace was the most popular Democratic candidate, according to a Gallup poll. But in his weakened condition, FDR lacked the energy to fight the party bosses as they manipulated the process to make Truman his vice president. Truman was undistinguished but could be counted on to go along with the corporate program.

After FDR died, Truman succeeded him. In 1946, Wallace urged Truman to tamp down the “armament race” and warned of the dangers of the “atomic bombs.” Wallace would not have used nuclear weapons against Japan. Nor would he have stoked the Cold War as did his successors. Wallace opposed “preventive war,” which violated the then recently adopted United Nations Charter.

Wallace delivered a strong speech at Madison Square Garden in New York City, exhorting the U.S. not to drop atomic bombs on the Soviet Union. He sought to limit the budget for weapons of war. “No nation should be allowed to spend on its military establishment more than perhaps 15 percent of its budget,” Wallace said, endeavoring to halt the impending Cold War with Russia.

Sanders, too, decries the bloated military budget. “Instead of spending $1.8 trillion on weapons of destruction designed to kill each other,” he declared at the March 15 debate, “maybe we should pool our resources and fight our common enemy, which is climate change.”

In 1948, Wallace ran a third-party campaign against Truman. Although Wallace had advocated for civil rights, opposed the poll tax and would not speak in segregated venues, Black people “tended to be wary of his politics, and voted overwhelmingly for Truman,” Alex Ross wrote in The New Yorker.

During the campaign, Wallace was red-baited and accused of being a Soviet operative. Stone and Kuznick analyzed the results of the election: “The Red-baiting, the dismissive treatment of Wallace by the major newspapers, Truman’s move to the left on domestic issues, and a last-minute rush to Truman by Democratic voters who feared a victory by Republican Thomas Dewey resulted in an electoral disaster for the Wallace campaign.” 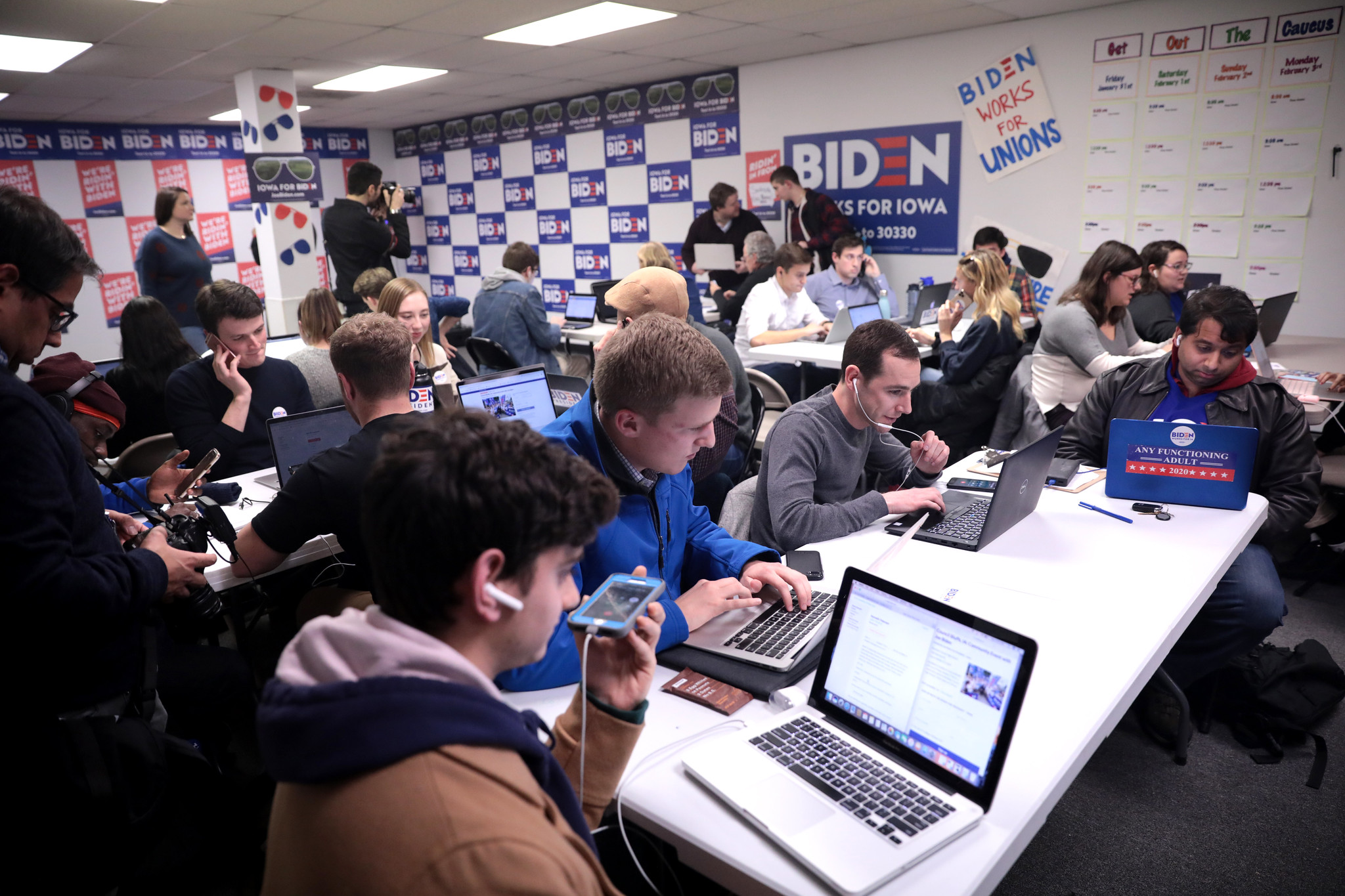 Aided and abetted by the corporate media, the centrists in the Democratic Party are doing their best to ensure that Sanders is not the Democratic candidate. Nearly all former candidates — except Senator Elizabeth Warren, who remains aloof from endorsing either Sanders or Biden — are centrists and support Biden.

The narrative promulgated by centrists and the corporate media and internalized by many Black voters is that Sanders can’t win the presidential election, even though polls have consistently concluded that both he and Biden have an even chance of beating President Donald Trump.

Like Wallace, Sanders has been red-baited and accused of supporting authoritarian governments. In a front-page story, The New York Times painted a sinister — but false — picture of Sanders supporting the Soviet Union when he traveled there in 1988 to establish a sister city program between Burlington, Vermont, and a Russian city.

At their debate, Biden confronted Sanders about his praise for Fidel Castro’s literacy campaign after the 1959 Cuban Revolution. Sanders replied that he opposed authoritarian governments but “it is incorrect to say they never do anything positive.” He cited China’s reduction in poverty. Former President Barack Obama — whom Biden frequently references — went even further than Sanders in praising Cuban achievements when he tried to begin the process of normalizing relations between the U.S. and Cuba.

Biden said it’s one thing to occasionally mention something positive a country has done, but, he added, “the idea of praising a country that is violating human rights around the world…” It is unlikely Biden was referring to the United States, whose officials are being investigated by the International Criminal Court for committing war crimes and crimes against humanity during the “war on terror.” Biden, who was instrumental in securing congressional approval for President George W. Bush’s Iraq War, will be a good steward of the empire.

Although Wallace got few votes and failed to unseat Truman in 1948, he “succeeded in having his ideas adopted, except in the field of foreign affairs,” Stone and Kuznick noted.

Likewise, when he debated Biden, Sanders said, “Joe has won more states than I have, but we’re winning the ideological battle.” Indeed, exit polls on Super Tuesday showed that a majority of voters in Michigan, Missouri and Mississippi — all of which were won by Biden — favored a government medical plan instead of private insurance.

Throughout the primary season, Sanders’s fingerprints have been all over the debates and have permeated the campaigns. Indeed, all of the candidates have embraced some or many of Sanders’s progressive policies. Just before the debate, Biden adopted a version of Sanders’s proposal that students be able to attend public colleges and universities tuition-free.

← COVID-19: The Mutilated World Is Moved by the Nurses and Doctors
COVID-19: Genome Analysis Suggests 2 Viruses May Have Combined →

32 comments for “Is the DNC Repeating History in Derailing a Socialist Candidate?”