With Assange still caged behind bullet-proof glass, lawyers from both sides argued whether international or domestic law would determine whether an extradition can be made for a political crime, as Craig Murray reports.

In Wednesday’s proceedings in court, the prosecution adopted arguments so stark and apparently unreasonable I have been fretting on how to write them up in a way that does not seem like caricature or unfair exaggeration on my part. What has been happening in this court has long moved beyond caricature. All I can do is give you my personal assurance that what I recount actually is what happened.

As usual, I shall deal with procedural matters and Julian’s treatment first, before getting in to a clear account of the legal arguments made.

District Judge Vanessa Baraitser is under a clear instruction to mimic concern by asking, near the end of every session just before we break anyway, if Julian is feeling well and whether he would like a break. She then routinely ignores his response. Yesterday he replied at some length he could not hear properly in his glass box and could not communicate with his lawyers (at some point yesterday they had started preventing him passing notes to his counsel, which I learn was the background to the aggressive prevention of his shaking his Spanish lawyer, Baltasar Garzon’s, hand goodbye).

Baraitser insisted he might only be heard through his counsel, which given he was prevented from instructing them, was a bit rich. This being pointed out, we had a ten minute adjournment while Julian and his counsel were allowed to talk down in the cells – presumably where they could be more conveniently bugged yet again.

On return, attorney Edward Fitzgerald made a formal application for Julian to be allowed to sit beside his lawyers in the court. Julian was “a gentle, intellectual man” and not a terrorist. Baraitser replied that releasing Assange from the dock into the body of the court would mean he was released from custody. To achieve that would require an application for bail. 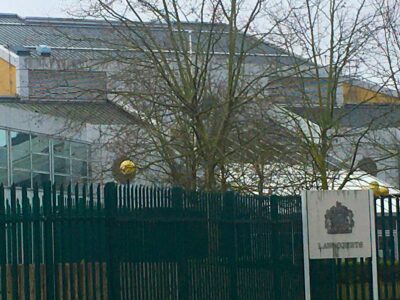 Again, the prosecution counsel James Lewis intervened on the side of the defence to try to make Julian’s treatment less extreme. He was not, he suggested diffidently, quite sure that it was correct that it required bail for Julian to be in the body of the court, or that being in the body of the court accompanied by security officers meant that a prisoner was no longer in custody. Prisoners, even the most dangerous of terrorists, gave evidence from the witness box in the body of the court next to the lawyers and magistrate. In the High Court prisoners frequently sat with their lawyers in extradition hearings, in extreme cases of violent criminals handcuffed to a security officer.

Baraitser replied that Assange might post a danger to the public. It was a question of health and safety. How did Fitzgerald and Lewis think that she had the ability to carry out the necessary risk assessment? It would have to be up to Group 4 to decide if this was possible.

Yes, she really did say that. Group 4 would have to decide.

Baraitser started to throw out jargon like a Dalek when it spins out of control. “Risk assessment” and “health and safety” featured a lot. She started to resemble something worse than a Dalek, a particularly stupid local government officer of a very low grade. “No jurisdiction” – “Up to Group 4”. Recovering slightly, she stated firmly that delivery to custody can only mean delivery to the dock of the court, nowhere else in the room. If the defence wanted him in the courtroom were he could hear proceedings better, they could only apply for bail and his release from custody in general. She then peered at both barristers in the hope this would have sat them down, but both were still on their feet.

In his diffident manner (which I confess is growing on me) Lewis said “the prosecution is neutral on this request, of course but, err, I really don’t think that’s right”. He looked at her like a kindly uncle whose favourite niece has just started drinking tequila from the bottle at a family party.

Baraitser concluded the matter by stating that the Defence should submit written arguments by 10am tomorrow on this point, and she would then hold a separate hearing into the question of Julian’s position in the court.

The day had begun with a very angry Magistrate Baraitser addressing the public gallery. Yesterday, she said, a photo had been taken inside the courtroom. It was a criminal offence to take or attempt to take photographs inside the courtroom. Vanessa Baraitser looked at this point very keen to lock someone up. She also seemed in her anger to be making the unfounded assumption that whoever took the photo from the public gallery on Tuesday was still there on Wednesday; I suspect not. Being angry at the public at random must be very stressful for her. I suspect she shouts a lot on trains. 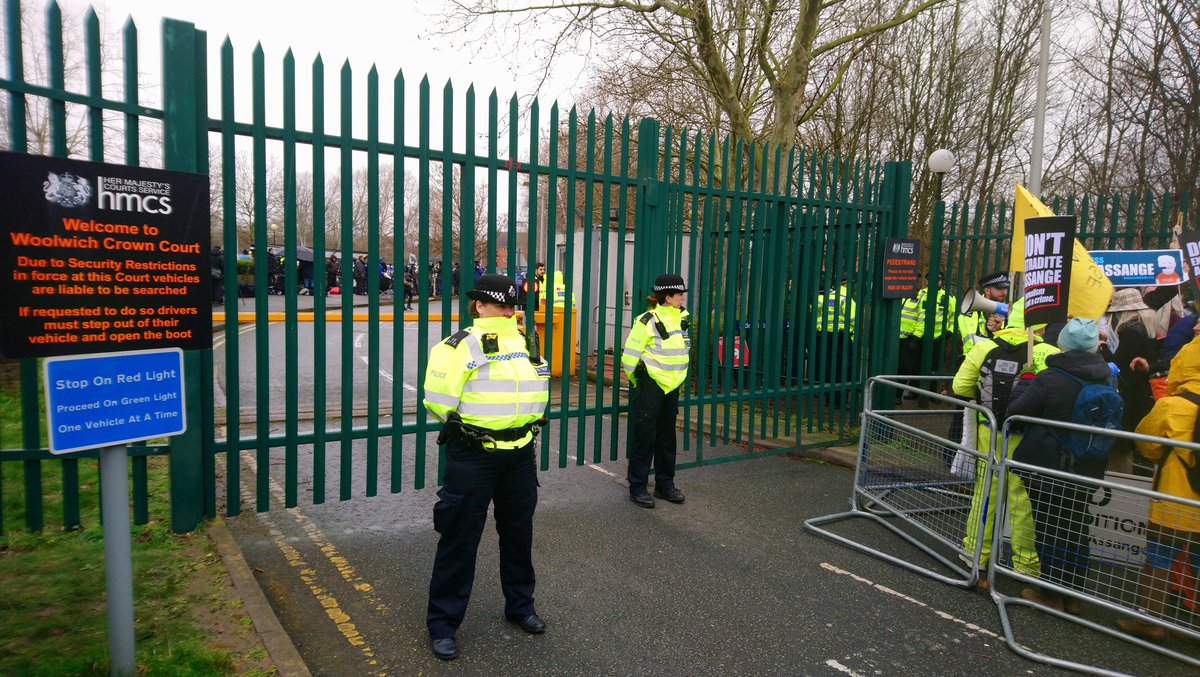 Ms Baraitser is not fond of photography – she appears to be the only public figure in Western Europe with no photo on the internet. Indeed the average proprietor of a rural car wash has left more evidence of their existence and life history on the internet than Vanessa Baraitser. Which is no crime on her part, but I suspect the expunging is not achieved without considerable effort. Somebody suggested to me she might be a hologram, but I think not. Holograms have more empathy.

I was amused by the criminal offence of attempting to take photos in the courtroom. How incompetent would you need to be to attempt to take a photo and fail to do so? And if no photo was taken, how do they prove you were attempting to take one, as opposed to texting your mum? I suppose “attempting to take a photo” is a crime that could catch somebody arriving with a large SLR, tripod and several mounted lighting boxes, but none of those appeared to have made it into the public gallery.

An Act vs. a Treaty

We now come to the consideration of Wednesday’s legal arguments on the extradition request itself. Fortunately, these are basically fairly simple to summarise, because although we had five hours of legal disquisition, it largely consisted of both sides competing in citing scores of “authorities”, eg dead judges, to endorse their point of view, and thus repeating the same points continually with little value from exigesis of the innumerable quotes.

As prefigured yesterday by magistrate Baraitser, the prosecution is arguing that Article 4.1 of the UK/US extradition treaty has no force in law.

Opening his argument, Assange’s attorney Edward Fitzgerald QC argued that the Extradition Act of 2003 alone is not enough to make an actual extradition. The extradition requires two things in place; the general Extradition Act and the Extradition Treaty with the country or countries concerned. “No Treaty, No Extradition” was an unbreakable rule. The Treaty was the very basis of the request. So to say that the extradition was not governed by the terms of the very treaty under which it was made, was to create a legal absurdity and thus an abuse of process. He cited examples of judgements made by the House of Lords and Privy Council where treaty rights were deemed enforceable despite the lack of incorporation into domestic legislation, particularly in order to stop people being extradited to potential execution from British colonies.

Fitzgerald then continued to say that international jurisprudence had accepted for a century or more that you did not extradite political offenders. No political extradition was in the European Convention on Extradition, the Model United Nations Extradition Treaty and the Interpol Convention on Extradition. It was in every single one of the United States’ extradition treaties with other countries, and had been for over a century, at the insistence of the United States. For both the UK and U.S. Governments to say it did not apply was astonishing and would set a terrible precedent that would endanger dissidents and potential political prisoners from China, Russia and regimes all over the world who had escaped to third countries.

In reply Lewis stated that a treaty could not be binding in English law unless specifically incorporated in English law by Parliament. This was a necessary democratic defence. Treaties were made by the executive which could not make law. This went to the sovereignty of Parliament. Lewis quoted many judgements stating that international treaties signed and ratified by the UK could not be enforced in British courts. “It may come as a surprise to other countries that their treaties with the British government can have no legal force” he joked.

Lewis said there was no abuse of process here and thus no rights were invoked under the European Convention. It was just the normal operation of the law that the treaty provision on no extradition for political offences had no legal standing.

Before commenting please read Robert Parry’s Comment Policy. Allegations unsupported by facts, gross or misleading factual errors and ad hominem attacks, and abusive or rude language toward other commenters or our writers will not be published.  If your comment does not immediately appear, please be patient as it is manually reviewed. For security reasons, please refrain from inserting links in your comments.

13 comments for “ASSANGE EXTRADITION: Your Man in Public Gallery – Day No. 3”