Arick Wierson, who is pushing the billionaire’s presidential bid, devoted himself in 2018 to softening the image of Brazil’s extreme-right leader, reports Ben Norton. 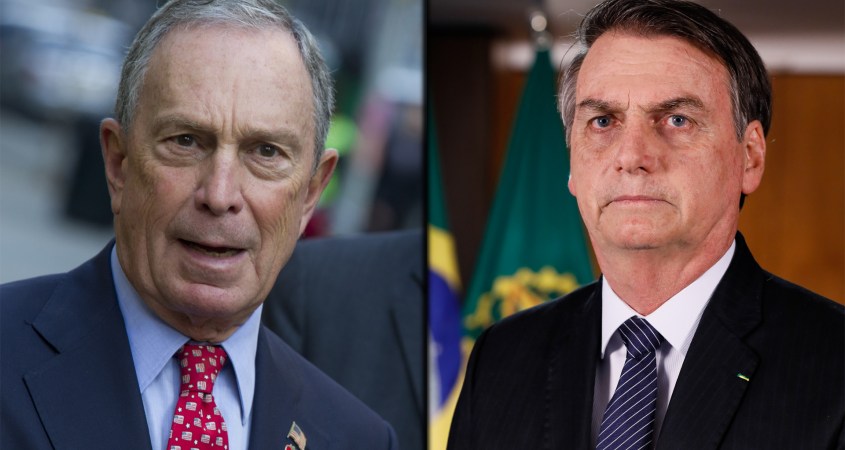 A Michael Bloomberg surrogate pumping up the billionaire’s 2020 campaign for president helped to elect Brazil’s extreme-right leader, Jair Bolsonaro, an open supporter of military dictatorship who frequently threatens violence against his political opponents.

Arick Wierson is a public relations strategist who served as a political aide and the top communications adviser to Bloomberg when the Republican media mogul was mayor of New York City.

Wierson worked with Bloomberg for nearly nine years, he noted, “first as an aide in his 2001 political campaign, and later as his chief media advisor at City Hall.” Wierson is so close with the billionaire he sarcastically refers to himself in his Twitter profile as a “Former Media Hack for Mayor Bloomberg.” 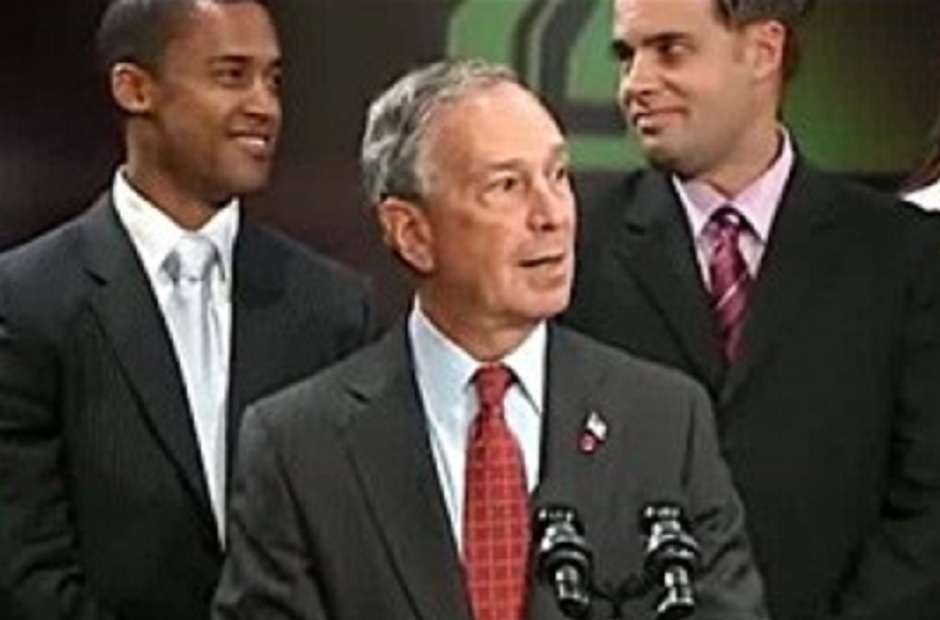 In 2018, Wierson joined Bolsonaro’s presidential campaign, devoting himself to softening the image of the Brazilian demagogue who pledged to imprison or exile leftist rivals and said in a newspaper interview that a congresswoman was not “worth raping; she is very ugly.”

Since coming to power with the help of Bloomberg’s former chief media adviser, Bolsonaro has waged a full frontal assault on Brazil’s political system. He has signaled his real agenda by openly praising Chile’s murderous dictator Augusto Pinochet and taunting the United Nations human rights chief over her father’s torture at the hands of his military junta.

A critic on Twitter asked Wierson, “how hard is it for you to sleep at night knowing you took money to make a fascist like Bolsonaro more ‘likeable’ on a scale of ‘every night i stare into a terrifying void of my own making unable to rest’ to ‘i have no soul and sleep like a baby?’”

The Bloomberg surrogate replied succinctly, “I sleep just fine. thanks for asking.”

I sleep just fine. thanks for asking.

Although Wierson no longer appears to have an official position in the Bloomberg campaign, he is aggressively promoting him and has become a prominent advocate for the billionaire candidate in corporate media.

In his media appearances and on his social media accounts, Wierson has vigorously attacked self-described socialist Senator Bernie Sanders, the most popular presidential candidate in the Democratic primary.

On both Twitter and Facebook, Wierson posts nonstop pro-Bloomberg propaganda. He openly fantasizes about a brokered convention, in which the DNC hands the nomination to the oligarch. A banner on his Facebook profile reads, “I’m with Mike Bloomberg 2020.”

Wierson has found a reliable platform to defend Bloomberg’s candidacy on corporate cable news media. Back in November 2019, he made the early case for the billionaire running for president in a CNN op-ed titled “Michael Bloomberg is the antidote to Donald Trump.” The piece celebrated his “serene disposition and courage” and declared that he “can resurrect America’s standing in the world.”

Then on Feb. 14, Wierson published another column for CNN promoting Bloomberg as “the ideal standard bearer for the party in 2020, representing Democrats’ best chance for taking back the White House from Trump.”

Four days later, Wierson was invited on CNN Newsroom with Brooke Baldwin, where he proclaimed that “Michael Bloomberg represents the Democratic Party’s best chance to take on Donald Trump in 2020.”

Wierson portrayed the Democratic primary as a battle between the billionaire and the self-declared democratic socialist. “As far as I’m concerned, it’s a two-person race: it’s Bernie Sanders and Mike Bloomberg,” he said. 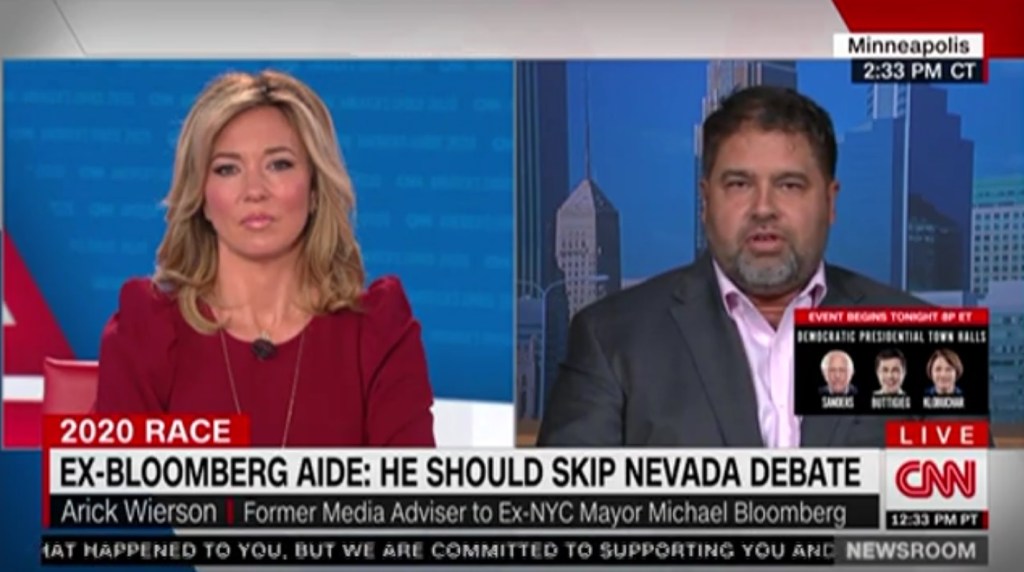 In his CNN appearances, Arick Wierson advised the billionaire to avoid the presidential debates, because “Bloomberg is not exactly a warm and fuzzy guy,” he conceded, and “the chances of him coming off as dry, lacking empathy, and somewhat mechanical loom large.”

Wierson’s role on the Bolsonaro campaign was trumpeted by Bloomberg Media, the billionaire candidate’s personal media empire. In an October 2018 puff piece titled “Bolsonaro’s Message on Love and Peace Tested in Brazil Media,” Bloomberg.com credited Wierson with helping to soften the demagogue’s personality with a heartwarming ad about loving one another and combating hate.

Wierson tweeted out a link to the article at the time, noting that he and his colleagues at the “@jairbolsonaro campaign will be testing some novel tv strategies over next three weeks.”

@jairbolsonaro campaign will be testing some novel tv strategies over next three weeks.#elesim #inovação https://t.co/JFETHYAbOp

Wierson heaped praise on the far-right presidential candidate, writing on social media that Bolsonaro “is going to clarify a lot in the Manifesto. Brazil will be able to sleep in peace.” He even complained that Brazilian journalists were treating Bolsonaro unfairly — while the far-right president has gone on to threaten media outlets that exposed his dirty secrets, particularly his links to the assassination of socialist feminist activist Marielle Franco. 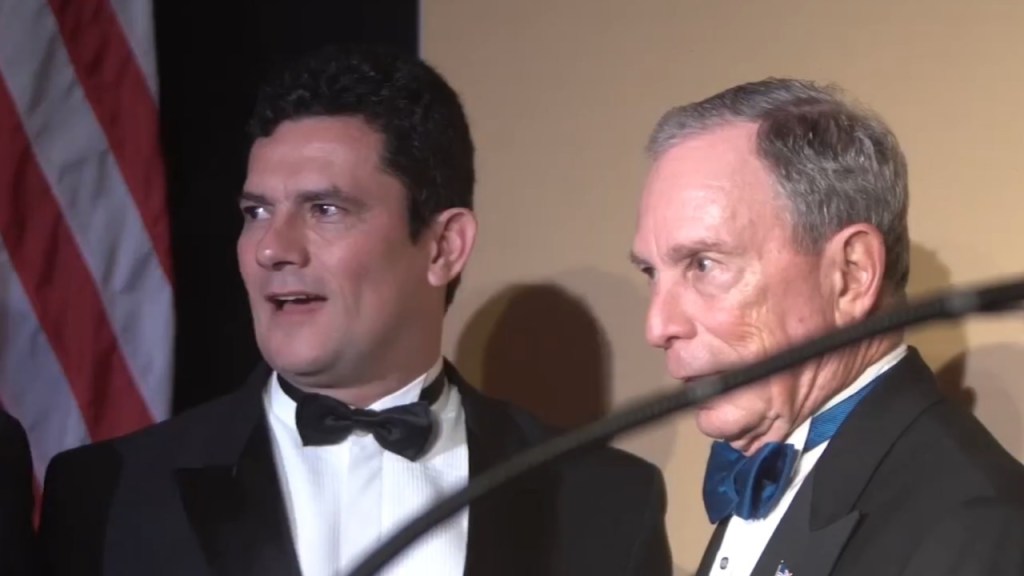 Michael Bloomberg himself has rubbed elbows with Bolsonaro henchmen like Sergio Moro, a mastermind of the political coup against Brazil’s left-wing Workers’ Party government and the jailing of its leader.

In 2018, the Brazilian-American Chamber of Commerce held an opulent gala dinner at which the powerful lobby group gave its top award to both Moro and Bloomberg.

As a senior judge with extensive ties to the U.S. government, Moro oversaw a Washington-backed supposed “anti-corruption” operation, known as Lava Jato, which was used to orchestrate a soft coup against Brazil’s democratically elected President Dilma Rousseff and then imprison Lula da Silva, by far the most popular candidate in Brazil’s 2018 presidential election.

After conspiring with Bolsonaro allies to bring the far-right demagogue to power, Moro was rewarded with a promotion to justice minister. Bolsonaro and Moro immediately proceeded to visit CIA headquarters.

In 2019, the Brazilian-American Chamber of Commerce honored Bolsonaro, selling every one of the $30,000-per-table tickets to its gala. Bolsonaro ended up not attending, however, after LGBTQ activists pressured corporate sponsors to withdraw their support, citing the extremist Brazilian leader’s raging homophobia. (When a journalist asked Bolsonaro about investigations into his son’s alleged corruption in December, the far-right president lashed out. “You have a terribly homosexual face,” he barked at the reporter.)

The links between the Bloomberg camp and Bolsonaro’s allies also reflect the role the billionaire’s own media network has played in shaping both leaders’ images.

Bloomberg Businessweek also honored Moro in 2016 by dubbing him No. 10 in its list of the 50 most influential people of the year.

Many Bloomberg columnists sang the praises of Bolsonaro, celebrating him as the “pro-business candidate.” Among them was Admiral James Stavridis, a former commander of NATO and Bloomberg columnist, who proclaimed that the rise of “Brazil’s Bolsonaro Completes a U.S. Sweep of South America.”

The caption on the featured image did away with any pretense of subtlety: “Yankee come back.” 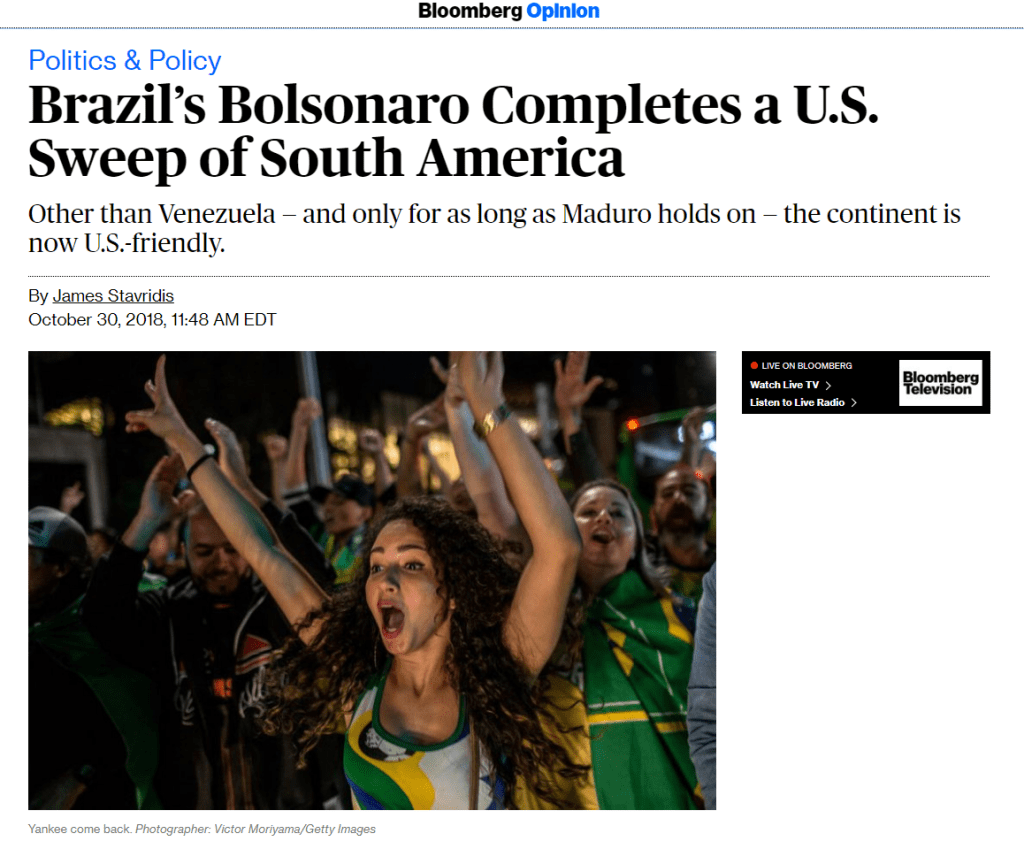 Op-ed for Bolsonaro Without Disclosing Connection

Arick Wierson has charted an unorthodox career path. During Bolsonaro’s presidential campaign, he frequently appeared in Brazilian media outlets, speaking Portuguese, where he was identified as the “political strategist of Michael Bloomberg.” He has even given interviews in Portuguese to Angolan state television.

Wierson writes regular columns for several websites, including Observer, the publication previously known as The New York Observer, which was run by Jared Kushner until his father-in-law Donald Trump was elected president in 2016, at which point Kushner closed down the print newspaper and transferred ownership to his family to assume duties as a White House senior adviser.

Many of Wierson’s Observer columns appear to be sponsored content for companies such as Great Clips, Anytime Fitness, Sezzle, and Revel.

Wierson’s political punditry reads like an extension of his consulting work. In an article in Observer in October 2018, on the eve of Brazil’s election, Wierson downplayed Bolsonaro’s similarities to Trump.

“Despite many attempts by the media to label Trump and Bolsonaro as twins separated at birth, the two men are as different as they are similar,” Wierson wrote. He portrayed the Brazilian demagogue as a hard-working military veteran from a modest background.

Left undisclosed was Wierson’s work as a top adviser to Bolsonaro.

The only conflict of interest revealed in the article came at the end, with the following note: “Full Disclosure: Arick Wierson is a minority shareholder in a Brazilian political consultancy, TZU, quoted in this article.”

In other words, Wierson quoted a firm he partially owns to bolster his own argument.

The consultant closed by predicting “a new ‘golden age’ of U.S – Brazilian relations, which I believe will not only help Brazil’s economy get back on track, but strengthen our mutual security concerns.”

To forge that unshakeable bond with the junta-happy Brazilian leader, Wierson clearly sees his other former boss, Bloomberg, as the perfect candidate.

10 comments for “Bloomberg Surrogate Was PR Guru for Bolsonaro”