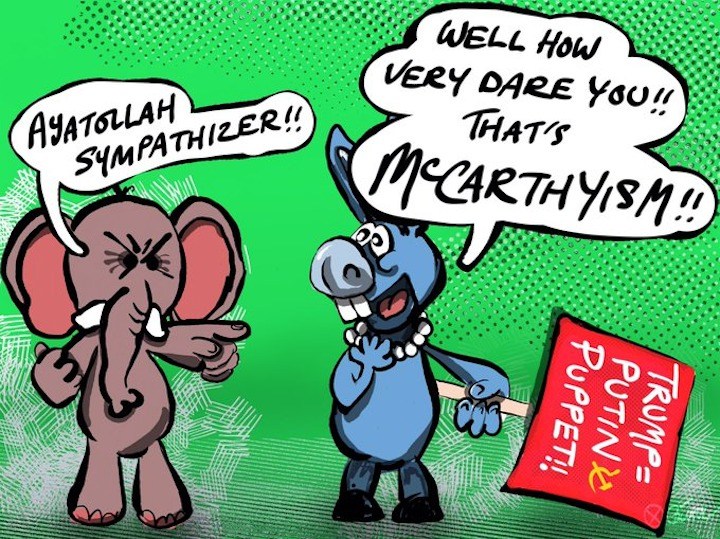 Democratic Party royal family member Chris Cuomo delivered a pearl-clutching, hand-wringing monologue on CNN on Jan. 9 about how appalling and outrageous it is for Republicans to accuse Democrats of having covert loyalties to a foreign government.

Cuomo, who is the son of a Democratic New York Governor and the brother of another Democratic New York Governor, began his “Closing Argument” segment rationally enough, berating the 194 Representatives who voted against opposing Trump’s ability to initiate an Iran war without congressional approval. Obviously the more resistance there is to Mike Pompeo manipulating the highly suggestible commander-in-chief into any more reckless warmongering against Tehran, the better.

But then, without any coherent segue, Prince Fredo began babbling about Republicans leveling baseless accusations about Democrats having loyalties to Iran.

"Shame on you and every Trumper and never-Trumper who voted against this."@ChrisCuomo addresses those who voted against the Iran War Powers resolution and those in the GOP who aim to divide the country when unity is a life and death matter. pic.twitter.com/kNMnXEeTdJ

“They’re in love with terrorists,” we see Republican Representative Doug Collins saying in Cuomo’s clip. “They mourn Soleimani more than they mourn our Gold Star families, who are the ones who suffered under Soleimani. That’s a problem.”

Cuomo also highlighted a tweet by Republican Representative Mark Meadows claiming that “Democrats are falling all over themselves equivocating about a terrorist” (which also drew angry Democratic backlash on the platform), and expressed astonishment at war crime fetishist Nikki Haley’s ridiculous claim that “The only ones that are mourning the loss of Soleimani are our Democrat leadership, and our Democrat presidential candidates.”

“So on the right, stop spreading toxic gossip about who likes terrorists,” Cuomo bloviated in a long-winded conclusion, making no mention at any time of the fact that Democrats have been spouting this exact same sort of “toxic gossip” for more than three years now.

If only we had a word for this — something-ism https://t.co/ubMlhdqGj2

“I never thought there would be a moment in time that the Speaker of the House of Representatives would actually be defending Soleimani,” McCarthy said, adding, “Did you listen to what the Speaker just said? ‘Soleimani was a bad person, but…’ There is no ‘but.’”

“If only we had a word for this — something-ism,” quipped notorious Russiagater Jonathan Chait of McCarthy’s comments. The joke, obviously, being that [Kevin] McCarthy was practicing [Joe] McCarthyism by accusing political rivals of having loyalties to a hostile foreign government.

This would be the same Jonathan Chait who authored what was arguably the single most insane Trump-Russia conspiracy article that ever made it past the editors of the mainstream press in a 2018 New York Magazine masterpiece titled “What If Trump Has Been a Russian Asset Since 1987?,” which was just as crazy and full of baseless speculation as the headline suggests. McCarthyite Russia hysteria was being mainlined into the veins of rank-and-file Democrats so aggressively at the time that Chait was subsequently granted a (serious, non-mocking) interview with Chris Hayes on MSNBC to expound upon his fact-free conspiracy theory.

I somehow forgot to commemorate the recent one-year anniversary of one of the most important journalistic works ever: @jonathanchait’s “What If Trump Has Been a Russian Asset Since 1987?” Shout-out to @chrislhayes for promoting this stellar reporting: https://t.co/05nInIwr1J pic.twitter.com/lVokshKidN

None of this, of course, is to defend any of the vile Republican comments listed above. Accusing political adversaries of being soft toward a targeted government in order to shut down dissent and pressure them to espouse a more militaristic position is absolutely despicable. It’s a very typical right-wing tactic which is designed to shrink the Overton window of acceptable debate into the most hawkish and jingoistic ideological corner of political discourse possible. Which was why anyone to the left of Hillary Clinton found it extremely shocking and creepy when Democrats began making it their entire political strategy after their loss in 2016.

Democrats’ baseless yet relentless accusations of Kremlin loyalty against political opponents, from “Moscow Mitch” McConnell to “Putin Puppet” Trump, have sucked all oxygen out of the room for progressive reform and created political cover for this administration to freely escalate cold war tensions with Russia more aggressively than any president since the fall of the Berlin Wall. So it has been a relief to see Democrats and liberal pundits like Cuomo and Brian Stelter set aside the jingoism and McCarthyism to actively protest the warmongering of this Republican administration.

But I’ll make you a bet right now, and I doubt anyone will take me up on it: I bet you it won’t last.

I bet you that in the coming weeks, after the dust settles from this past week’s horrifying ordeal with Iran, that the Democratic establishment and its allied media narrative managers will pace their herd into forgetting all about opposing the US war machine and set them right back on track with impotent nonsense about Russia, Ukraine, and impeachment proceedings that will never remove Trump from office.

The News Churn Memory Hole: How The MSM Lies Even When Telling The Truth

"It’s not enough to simply expose the truth. You must also fully, repeatedly and consistently expose the ones who are telling lies."https://t.co/OSW6eFQVAn

Mark my words, and mark your memory. Hold on to your memory of how scary this past week was and what a big deal it’s been, and then watch carefully as the narrative managers memory hole the entire thing like it never happened, even as the military situation between the U.S. and Iran remains as precarious as ever. Let the contrast between your memory of what happened and their subsequent behavior inform you of what these people really are, and what they really stand for.

Don’t believe their sudden espousal of anti-war values and skepticism toward establishment war narratives. Ignore their stories about themselves and what they value, and watch their actions instead. It is a very safe bet that their words right now and their actions in the coming weeks will tell two very, very different stories.

Before commenting please read Robert Parry’s Comment Policy. Allegations unsupported by facts, gross or misleading factual errors and ad hominem attacks, and abusive or rude language toward other commenters or our writers will not be published.  If your comment does not immediately appear, please be patient as it is manually reviewed. For security reasons, please refrain from inserting links in your comments, which should not be longer than 300 words

22 comments for “Democrats Outraged at Republican Accusations of Foreign Loyalty”