It is impossible for the U.S. and Iran to de-escalate as long as the U.S. is deliberately attacking Iran’s economy with the goal of igniting a civil war, writes Caitlin Johnstone. 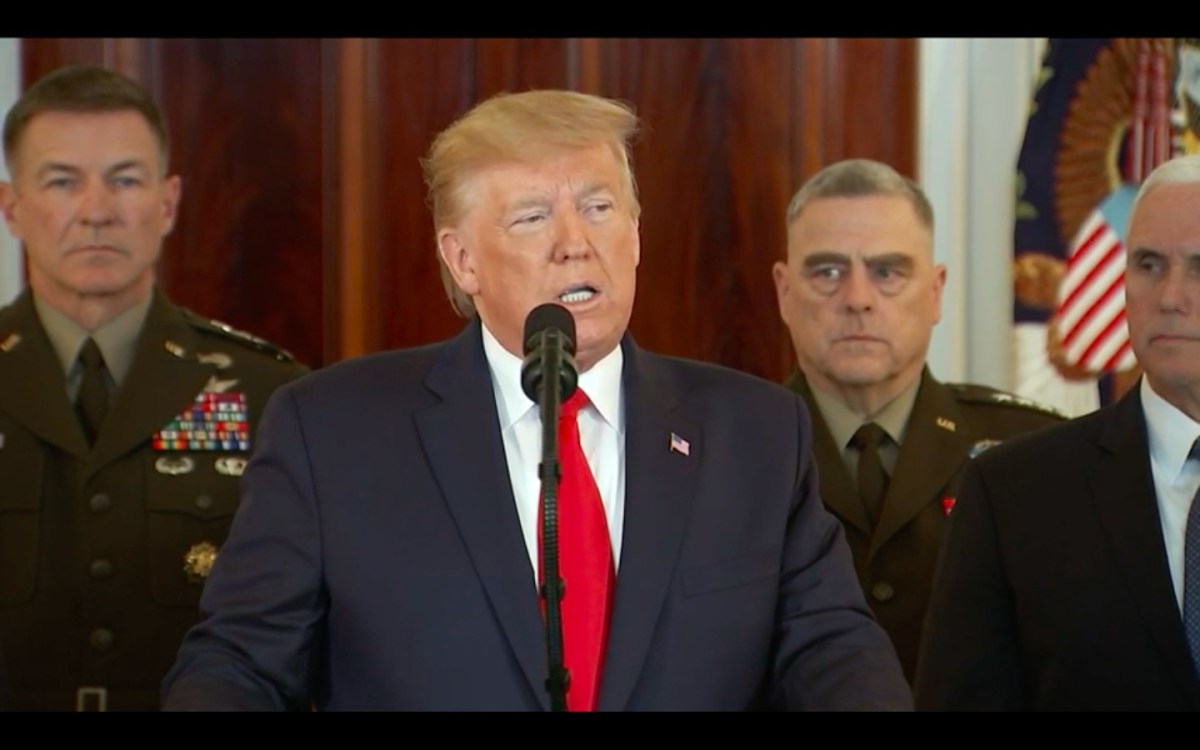 The United States and Iran entered into a direct military exchange for the first time with the drone assassination of General Qassem Soleimani last week and a retaliatory strike from Iran via surface-to-surface missiles upon two U.S. military bases on Wednesday.

As usual it was the less powerful nation that exercised restraint, with Iran skillfully targeting the bases’ military capabilities but taking measures to successfully avoid any casualties. The two nations de-escalated back down to their previous high level of dangerous hostilities with an understanding between them that neither side wants a full-scale war. Both sides played “chicken” and both sides swerved, and they know that about each other now.

So that was a relief. We were all forced to hold our breath and hope against hope that cooler heads would prevail after the senseless assassination of a sovereign nation’s top military official, and they did. A full-scale war that would have dwarfed Iraq and Vietnam in terms of death, destruction and destabilization was averted.

And then President Donald Trump immediately went right back to warmongering.

“As we continue to evaluate options in response to Iranian aggression, the United States will immediately impose additional punishing economic sanctions on the Iranian regime,” Trump said in his speech the morning after the Iranian missile strike. “These powerful sanctions will remain until Iran changes its behavior.”

It is unclear at this time what form these sanctions will take. If they are of the sort being leveled at Iran currently, they will further target Iranian civilians with the goal of making them even more miserable so that they rise up and overthrow their government. This deliberate attempt to foment civil war against Tehran is not speculation; it is a fact, admitted to by the Trump administration itself.

“Last week, Mr. Pompeo acknowledged to Michael J. Morrell, a former acting director of the C.I.A., that the administration’s strategy would not persuade Iranian leaders to change their behavior.

“’I think what can change is the people can change the government,’ he said on a podcast hosted by Mr. Morrell, in what appeared to be an endorsement of regime change.”

It is impossible for the U.S. and Iran to de-escalate from the military powderkeg situation they are in as long as the U.S. is deliberately attacking Iran’s economy with the goal of igniting a civil war in that country. The U.S. government intends to not just continue to escalate this direct assault, but to continue its increasingly intrusive military presence in the region, including the unwelcome occupation of Iraq.

And yet, bizarrely, Trump also claims to want to reach a new nuclear deal with Iran.

“The very defective JCPOA expires shortly anyway and gives Iran a clear and quick path to nuclear breakout,” Trump said. “Iran must abandon its nuclear ambitions and end its support for terrorism. The time has come for the United Kingdom, Germany, France, Russia and China to recognize this reality. They must now break away from the remnants of the Iran deal, or JCPOA. And we must all work together toward making a deal with Iran that makes the world a safer and more peaceful place. We must also make a deal that allows Iran to thrive and prosper and take advantage of its enormous untapped potential.”

This is not going to happen. The U.S. government has already burned Tehran on the JCPOA and it’s not going to enter into a new deal as long as the US continues to inflict aggressions upon it that the US itself wouldn’t tolerate from any other nation.  Iran is going to be much less willing to trust the U.S. government in a new deal now and will require much more assurance and accommodation than it did in the previous one; such a negotiation (assuming the Trump administration even really wants it) would be harder, not easier. This will remain true even after Trump leaves office.

The airstrikes between the US and Iran were the result of the trajectory of escalations Trump initiated by wrongfully withdrawing from the JCPOA in order to smash Iran with sanctions. Heaping even more sanctions on top of those accelerates along that same trajectory toward war. https://t.co/CafcRr13E1

“The President asked the secretary general for NATO to become more involved in the Middle East,” a NATO statement said. “They agreed that NATO could contribute more to regional stability and the fight against international terrorism.”

So, things are only continuing to heat up with Iran, and there is no reason to believe more eruptions like the direct military confrontation we just experienced won’t occur again, with the world perhaps getting a lot less lucky next time. Trump and his supporters are trying to claim the evasion of full-scale war as a victory for both peace and for America, but it is neither.

All of the defenses of Trump’s warmongering that you’ve been seeing are premised upon the unquestioned assumption that it is both reasonable and acceptable for the United States to maintain a military presence in the Middle East, even in nations whose governments don’t want them there like Iraq and Syria. If the US didn’t insist on maintaining an enormous military presence in this one area on the other side of the planet, there would be no debate about the need for America to “defend” itself by attacking the Iranian economy, assassinating government officials, and conducting airstrikes upon Iraqi militias. It would just be another country on the other side of the world, doing its own thing in its own way.

Most Americans haven’t thought very hard about this premise. They are fed some lines about the need to protect American “interests” and some unexplained need to defend Israel, and because those lines are spoken in an authoritative tone of voice most are content to leave it there. But if Americans actually laid out all the facts in front of them and thought deeply about what their government’s Middle Eastern military presence costs them and risks for them compared to what it actually gains them, it would be seen for the insane imperialist power agenda that it so clearly is.

← Lies, the Bethlehem Doctrine & the Illegal Murder of Soleimani
The War in Afghanistan Is a Fraud (and Now We Have Proof) →