Fears of a major war in the Middle East exploded Thursday night with the U.S. assassination of arguably the second most powerful man in Iran.

The U.S. assassination of Iranian Revolutionary Guards Corps Commander Maj. Gen. Qassim Suleimani at Baghdad airport on Thursday night has increased fears of a major Middle East war breaking out between Iran and the United States.

The Pentagon confirmed the attack and said President Donald Trump directed it.  Trump ominously added to the extreme unease with Iran with a tweet after the U.S. drone airstrike on Suleimani’s car.

Suleimani had been head of the Quds Force for 23 years. The Pentagon allegation is that he directed attacks on U.S. military during the U.S. illegal occupation of Iraq after its 2003 invasion. Suleimani was one of the men most responsible for defeating ISIS in Iraq and Syria.

The sudden escalation of unpredictable tension brought about by this assassination came just days after the U.S. struck an Iranian-backed militia, which is part of the Iraqi military, killing more than 20 last week in Iraq.  The U.S. said it was in retaliation for a rocket attack the group allegedly carried out earlier in Kirkuk that killed a U.S. contractor.

In response, protestors breached the gates of the U.S. embassy in Baghdad, burned a building and remained inside for nearly two days before a re-enforcement of U.S. marines teargassed them off the embassy grounds.  While that increased tensions with both Iran and Iraq, which condemned the U.S. air strike on the militia group, the killing of Suleimani brings the crisis into dangerous new territory.

With Suleimani killed by the US, it is extremely difficult to see how this will not escalate into full scale war.

Very hard seeing Iran not retaliating, whether directly or indirectly, whether now or later.

This is going to be inflame the region…
>>

Spoke to a very knowledgeable person about what Iran's response to Soleimani's assassination might be. This would be the equivalent of Iran assassinating Petreus or Mattis, I argued.

No, he responded, this is much bigger than that…

The assassination comes after Trump was impeached and Israeli Prime Minister Benjamin Netanyahu was indicted last year. Both are facing difficult re-election campaigns in 2020 and have long portrayed Iran as the greatest enemy of Israel and the United States.

While Trump last year resisted neoconservatives in his administration, particularly then National Security Adviser John Bolton, in beginning a war with Iran (with just “ten minutes to go”) Trump’s calculus appears to have changed with the ordering of Suleimani’s assassination.

Though he dismissed the anti-Iranian hawk Bolton, both Secretary of State Mike Pompeo and Netanyahu still have his ear on Iran. What has changed politically was his impeachment and impending trial in the Senate ahead of November’s presidential election. Trump clearly understands the value of military conflict to shield a politician in trouble. 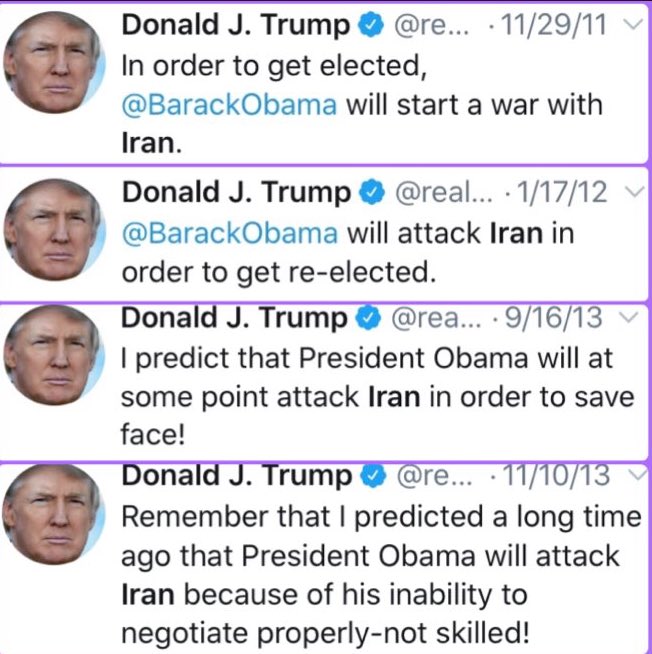 As did Bill Clinton: 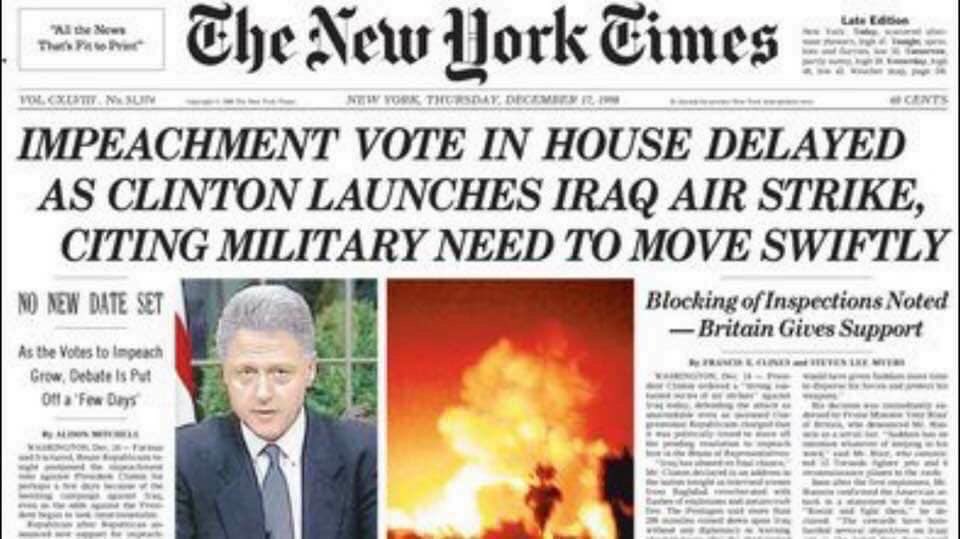 84 comments for “Fear of a Major Mideast War”