Actor John Krasinski is one of the CIA’s biggest fans.

“The CIA is something that we should all not only cherish, but be saying thank you every single day,” he declared.

“The coolest thing ever for me, I mean I totally nerded out when we got to the CIA,” Krasinski effused. “They were the most unbelievably generous, kind, smart people.”

Krasinski’s comments flowed directly from his experience as the star of the second season of the Amazon series “Tom Clancy’s Jack Ryan.”

In a new video analysis of the show (embedded at the end of this article), researcher Tom Secker exposed the show as straightforward U.S. imperial propaganda which was produced in direct collaboration with the CIA and Pentagon.

The editor of the website Spy Culture, Secker has elucidated the role of Hollywood in disseminating propaganda aimed at instilling a militaristic mindset in the public. Through FOIA documents, Secker has methodically demonstrated the role of the Pentagon, CIA and FBI in shaping scripts and setting the agenda of some of the most popular American films and TV shows.

In analyzing Amazon’s Jack Ryan series, Secker revealed that the CIA’s direct role in crafting the show’s content was concealed from viewers.

Even though the show was one of the first to film at the CIA’s Langley base in years, the following disclaimer appeared at the end of each episode: 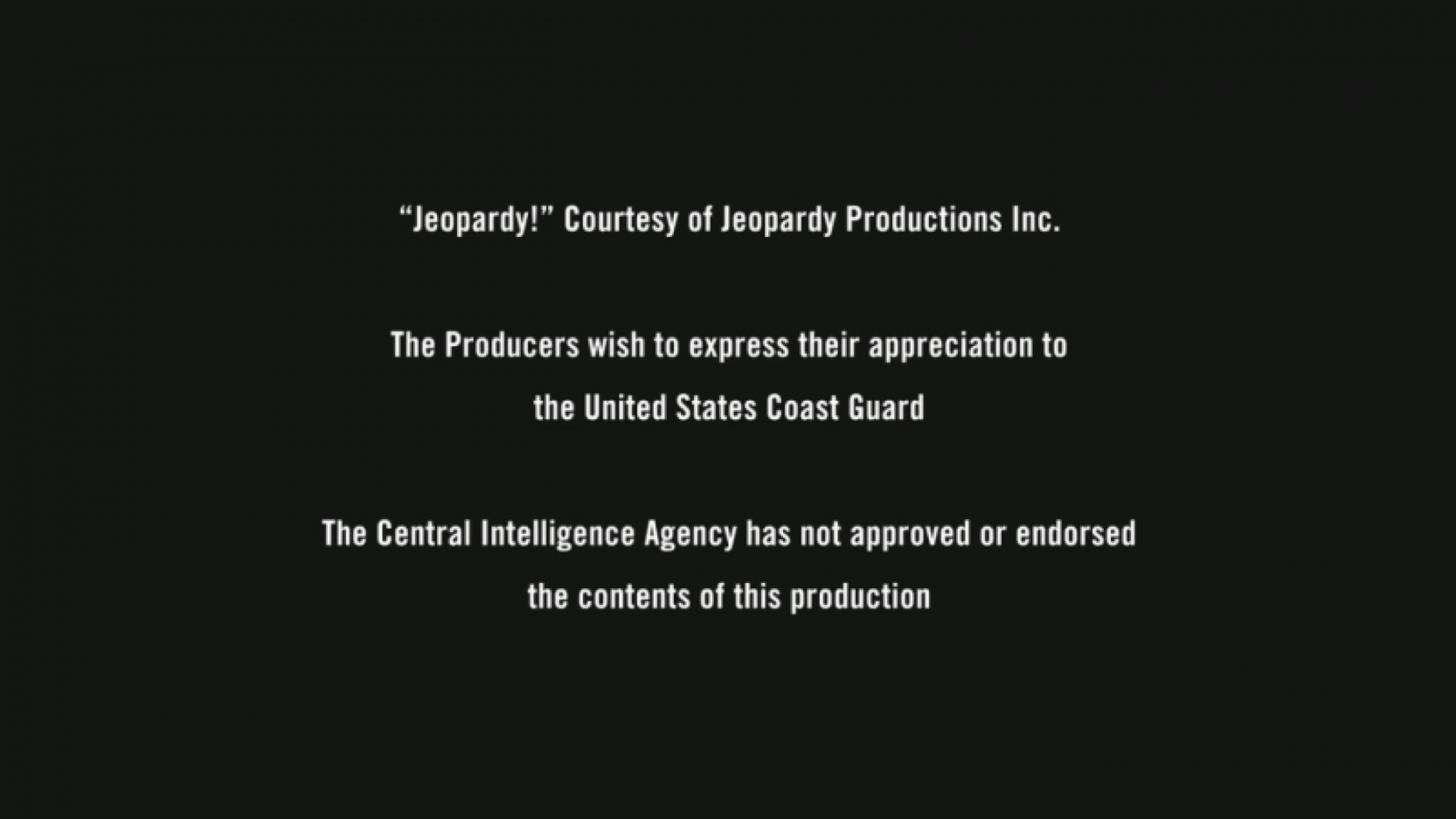 “This is government propaganda conducted in secret without the audience knowing,” Secker stated. “Their aim is to manipulate how you see the world.”

Inspired by the Cold War kitsch of pulp action author Tom Clancy, Amazon’s Jack Ryan series was the product of extensive and direct collaboration between the show’s producers and the CIA.

In off-the-cuff comments during a recent USO tour of military bases, Krasinksi revealed that he was eager to “do a show that would interface more with the military and intel community.” The actor said he requested direct engagement with the CIA, “so we did a lot of conversations about really making Jack Ryan fun as well as to make him relevant.”

Krasinksi revealed that Jack Ryan relied on “so many different consultants and people who are always checking in with us… It’s really just about asking questions and making sure we’re not doing anything too far beyond the pale.”

His co-star, Wendell Pierce, mentioned in a separate interview that he based his character on someone he met during one of the many trips the cast took to the CIA’s headquarters. In fact, many scenes in the show were filmed on the agency’s Langley, Virginia campus.

“They were the most generous, unbelievably giving people,” Krasinski said of the CIA officers he met in Langley. 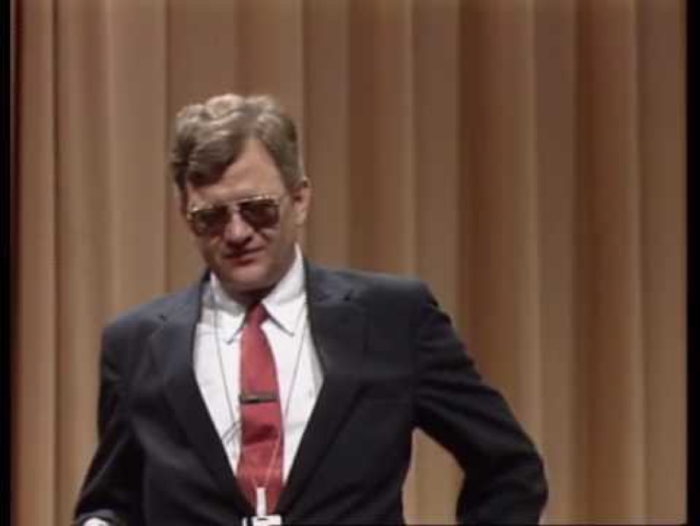 The late Tom Clancy, author of “Jack Ryan,” speaking at the NSA.

Tom Clancy, the late bestselling author of the Jack Ryan series, sold tens of millions of books to a massive fanbase of Cold War-crazed readers during the Reagan era. His pulp novels depicted galavanting U.S. spooks and soldiers playing unheralded roles in undermining the Soviet Union and its proxies on foreign frontiers while keeping the homeland safe.

A lifelong right-wing Republican, he dedicated his book, “Executive Orders,” to then-President Ronald Reagan. Clancy was subsequently invited to speak at the NSA, FBI and Pentagon.

During an appearance at the NSA, Clancy boasted of being taken on a US Navy frigate, then of trundling around in an M1A1 Abrams tank during a tour of an Army base.

The author even volunteered his work to be reviewed by the CIA’s office of public affairs, requesting secrecy in a missive to the agency on the grounds that that his publisher would be displeased if it found out about the exchange.

One of Clancy’s most popular books, “The Hunt for Red October,” was edited by the Pentagon when it was adapted to film.

The Clancy film, “Patriot Games,” was supported by the CIA, which volunteered its Langley headquarters as a shooting location to enhance the public relations value of the film.

His next jingoistic action flick, “A Clear and Present Danger,” was carefully reviewed during an advance screening at Washington DC’s Kennedy Center by a CIA officer.

Jack Ryan: Season One was launched in 2018, five years after Clancy died as a multi-millionaire part-owner of the Baltimore Orioles MLB club.

The show was filmed in Morocco, and was set in the paranoid environment of the so-called war on terror. The Pentagon rejected the show, probably because it depicted the U.S. military guarding CIA black sites and paying off local jihadis in Yemen. But it received support from the U.S. Coast Guard, which offered the producers free usage of its ships and helicopters.

The viewer learns in Jack Ryan: Season Two that Ryan was a former Marine who became the lone survivor when a child suicide bomber killed his entire unit in Afghanistan. The child’s motives are left unexplained.

But the Jack Ryan producers stand reality on its head by depicting Reyes as a deeply unpopular right-wing kleptocrat with close ties to the oligarchy. Meanwhile, the CIA’s white knight, Ryan, enters the country to help Gloria Bonalde, a left-wing feminist depicted as a warrior for “social justice.”

IMAGE: Nicolas Reyes is an oligarchic dictator bizarrely based on Nicolas Maduro, a leftist hated by the oligarchy

As anyone with a basic knowledge of the CIA’s history of subversion knows, Reyes is exactly the kind of character the Agency has supported and propped up across the world in form of right-wing dictators like Augusto Pinochet, Ephraim Rios-Montt, and Shah Reza Pahlavi. Today in Venezuela, the CIA and its cut-outs are supporting Juan Guaido, a figure supported by his country’s upper classes and right-wing governments in the region.

The show was shot in Bogota, Colombia, not Caracas, Venezuela. And as in the previous season, viewers are bombarded with negative stereotypes of The Natives. Venezuelans who appear on screen are depicted as violent protesters, murderers, corrupt officials, evil zombies who support the dictator, and once again, as killer kids.

While touting the role the CIA played in creating Amazon’s regime change fantasy thriller, Krasinski denied advancing any ulterior agenda. “Assumptions were being made that the US was attacking Venezuela,” he said in response to criticism from the Venezuelan government, “but that has nothing to do with our show.”

To Secker, the researcher who so clinically exposed the spooks behind the curtain of the Amazon series, Jack Ryan was designed to indoctrinate viewers into a “paranoid bigoted militarized mind fuck of a world view.”

Max Blumenthal is an award-winning journalist and the author of books including best-selling “Republican Gomorrah,” “Goliath,” “The Fifty One Day War” and “The Management of Savagery.”He has also produced numerous print articles for an array of publications, many video reports and several documentaries including “Killing Gaza” and “Je Ne Suis Pas Charlie.” Blumenthal founded the Grayzone Project in 2015 to shine a journalistic light on America’s state of perpetual war and its dangerous domestic repercussions.