Not only did it happen, it was written up as fact by establishment papers and outlets as varied as Yahoo, Politico and The Financial Times, reports Yasha Levine.

By Yasha Levine
The Grayzone

I know I’ve written about this before, but I feel like I have to address it again — seeing how just about every impeachment witness has repeated the claim that meddling by Ukrainian government officials did not happen in 2016 and that anyone who says otherwise is spreading toxic Russian propaganda. I’ve been dipping into these hearings every now and again and I’ve seen this said over and over. It reminds me of those new age quantum-mind-over-matter types in the “The Secret:” Repeat the mantra often enough and convince yourself it’s true and…it is!

Fiona Hill addressed Republican members of Congress promoting the conspiracy theory that Ukraine interfered in the 2016 election: "This is a fictional narrative that has been perpetrated and propagated by the Russian security services themselves." pic.twitter.com/1czUtCeWVT

Let’s start with a fact: Meddling in the 2016 election by Ukrainian politicians and government agencies happened.

The above is true and no amount of denial is going to change that. What’s more: Ukrainian nationals didn’t just meddle on their own, they also worked with Americans — including Ukrainian-American political operatives on the payroll of the Democratic Party. Not only did all this happen, it was written up as fact by establishment papers and outlets as varied as Yahoo, Politico, and The Financial Times in 2016 on the eve of the election. (See this by me here.)

The involvement of Ukrainian pols and officials in all of this has never been secret. It was acknowledged at the time. The principal actors openly talked and bragged about their exploits in the press. And why not? Back in 2016, no one thought that Trump would win the presidency. So why bother hiding it? 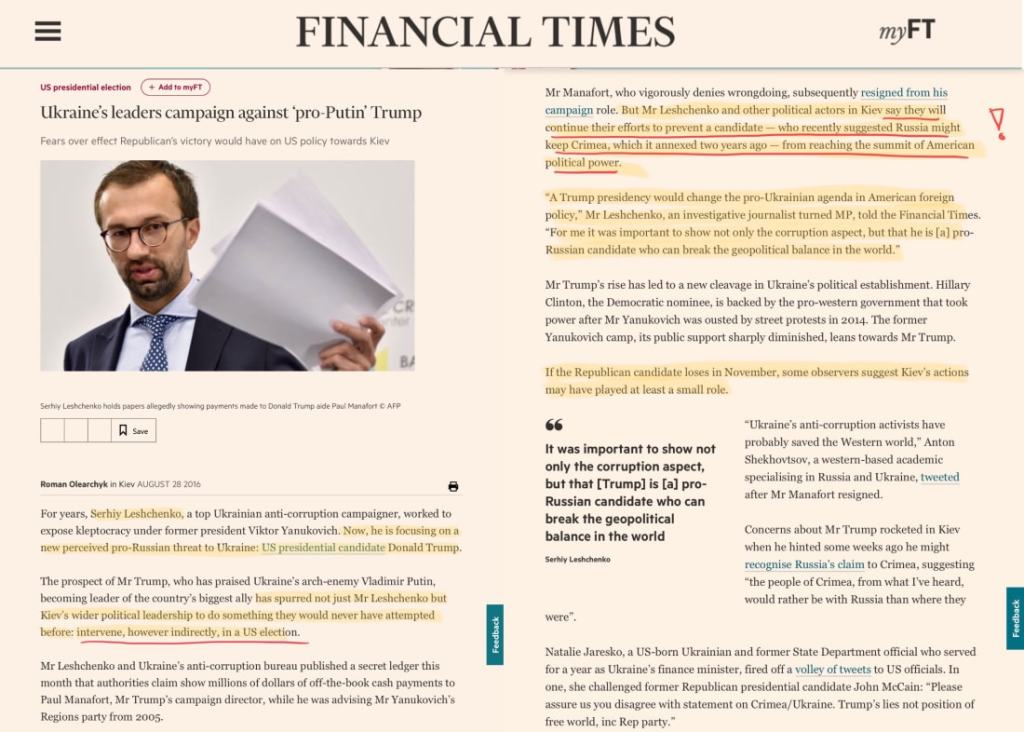 One of the best examples of this is the plot to take down Paul Manafort — the sleazy Republican political consultant who had long worked in Ukraine and who headed Donald’s Trump campaign.

In 2016, Serhiy Leshchenko, a Ukrainian member of parliament and an anti-corruption activist (who got embroiled in his own corruption scandal), coordinated the release of a handwritten ledger. The document purported to show off-the-book payments made to Manafort from the Party of the Regions — the political arm of the Viktor Yanukovich, the Ukrainian president who had been overthrown in a coup-type revolt by a much more Western-friendly political faction. The ledger itself was released by NABU, a Ukrainian government anti-corruption organization set up as result of prodding by the Obama administration and which was run with the backing and financial support of the FBI.

(As an aside: NABU — which also got embroiled into its own political corruption scandal — also happens to be at the heart of an internal Ukrainian political fight that sucked in ex-Ambassador Marie Yovanovitch. But that’s a different and complicated story. And then there’s the weird angle of the FBI being so closely involved with NABU at a time when this Ukrainian anti-corruption agency decided to involve itself in an American election.)

Anyway, Leshchenko — a foreign politician — made clear that his objective at the time was to kill off Trump’s candidacy. That’s a direct admission of meddling. As Oleksiy Kuzmenko has documented so well, Leshchenko repeated this statement in various ways in both English and Ukraine over and over again.

FYI @wiczipedia: Leshchenko “hoped” that release of Manafort info would hurt Trump. Here’s Leshchenko on his 08/19/2016 briefing re “Yanukovych ? for Manafort”: “I think this is the last nail into Manafort’s coffin. Hopefully also that of Trump” https://t.co/F3Bi1sQwDy https://t.co/StGPMXXvmL pic.twitter.com/DPzDyxQKSH

Lev Golinkin explained in The Nation a few months ago that the release of that ledger by Leshchenko and NABU was an important event  —  and a direct intervention in the election. “The story rocked the 2016 election, given Manafort’s position as head of Trump’s campaign. The Hillary Clinton campaign immediately seized on it as proof that Manafort — and therefore Trump —was tied to Yanukovych and the Kremlin,” he wrote. “Manafort was ousted based on handwritten pieces of paper — the story would’ve never gone anywhere without NABU and Leshchenko’s vouching for the ledger’s authenticity. That’s as direct as it gets.”

But three years later, this episode has been wiped from the collective memory of our media and political establishment. What used to be fact is now smeared as either a pro-Trump rightwing conspiracy theory or Russian propaganda — and probably both. But saying that it didn’t happen doesn’t change the historical record.

It’s hard for American hacks to hold 2 thoughts in their heads at once—but Russia meddled *and* Ukraine meddled in 2016. Ukrainians openly bragged about it. Neither side tipped election, but we did learn about real corruption in Trump campaign & DNC https://t.co/2AyK9oXuRh

Mark Ames makes a very good point: All this outside meddling didn’t swing the election, but it did help us learn something useful about our own political process. The hacking of email accounts belonging to the John Podesta and the Democratic National Committee revealed to Americans the corruption of the Democratic Party, including the way that the primaries are run. And leaks about Manafort revealed the corruption inside Trump campaign (if anyone doubted it in the first place) and ultimately sent a corrupt scumbag lobbyist to jail for tax evasion.

But this burst of transparency hasn’t done much good. Instead of reckoning with the fundamental rot in our political establishment and our political culture, all we’ve gotten is this non-stop selective outrage — a spectacle that puts Trump and his cronies and a foreign power at the center of everything that’s wrong domestically in America. But the problems are larger than Trump and they sure are larger than whatever foreign meddling may have occurred — whether from Ukraine, Russia, Turkey, Israel, or any of the other foreign and business interests that are constantly jockeying to sway the world’s most powerful empire.

Yasha Levine is an investigative journalist and a founding editor of The eXiled Online. His latest book is “Surveillance Valley: The Secret Military History of the Internet.”

← Appeal to Archbishop of Canterbury to Support Release of Julian Assange
US Again Complicit in an Illegal Coup, This Time in Bolivia →