Democratic freedoms aside, many nations in the world but particularly the U.S., Britain and China have interests to protect in Hong Kong, writes Mary Beaudoin. 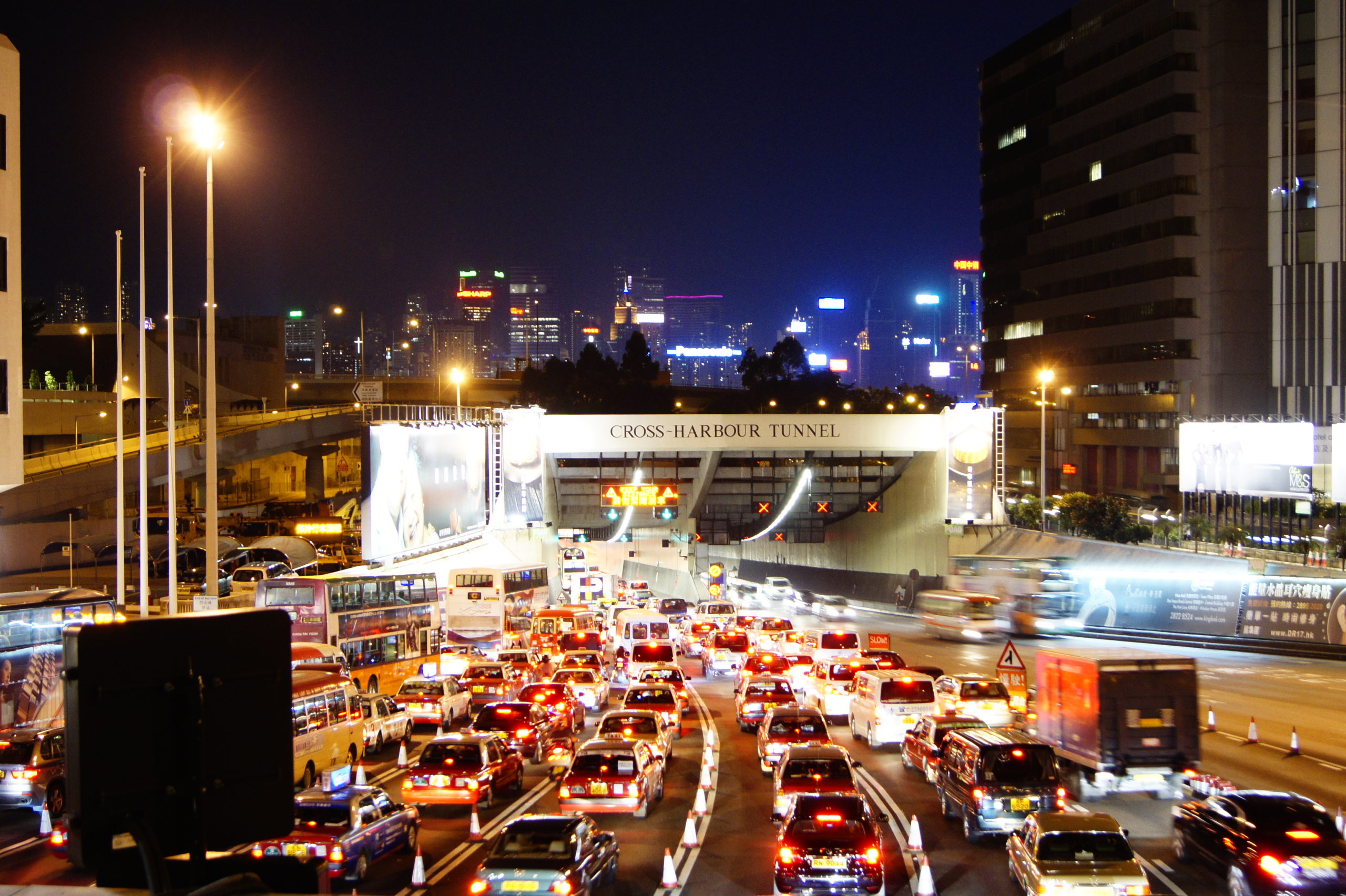 Entrance to the Cross-Harbour Tunnel in Hong Kong. (Hokachung, CC BY 3.0, Wikimedia Commons)

Should peace and justice advocates support pro-democracy efforts whenever they arise in the world? Even some U.S. alternative media identifying as liberal and progressive have joined the chorus, portraying the protests in Hong Kong as the noble pursuit of democratic freedoms, brave resistance to the authoritarian Chinese government oppressing the people.

Democratic freedoms aside, many nations in the world but particularly the U.S., Britain and China have interests to protect in Hong Kong. The island-city is a special administrative district within China with a unique history. It was subject to British colonial rule for approximately 150 years but, under an agreement with the People’s Republic of China, in 1997 it was returned to China and governed as “one country, two systems” with its own legal and administrative systems. Hong Kong’s special status enabled it to become a leading financial center and tax haven for international corporations. Its free market is so free from regulation and accountability that the conservative American think tank, the Heritage Foundation, has consistently ranked the city as No. 1 in its Index of Economic Freedom.

The arrangement has been of mutual benefit to both foreigners and the PRC. As a Reuters primer explains: “China uses Hong Kong’s currency, equity, and debt markets to attract foreign funds, while international companies use Hong Kong as a Launchpad to expand into mainland China.” 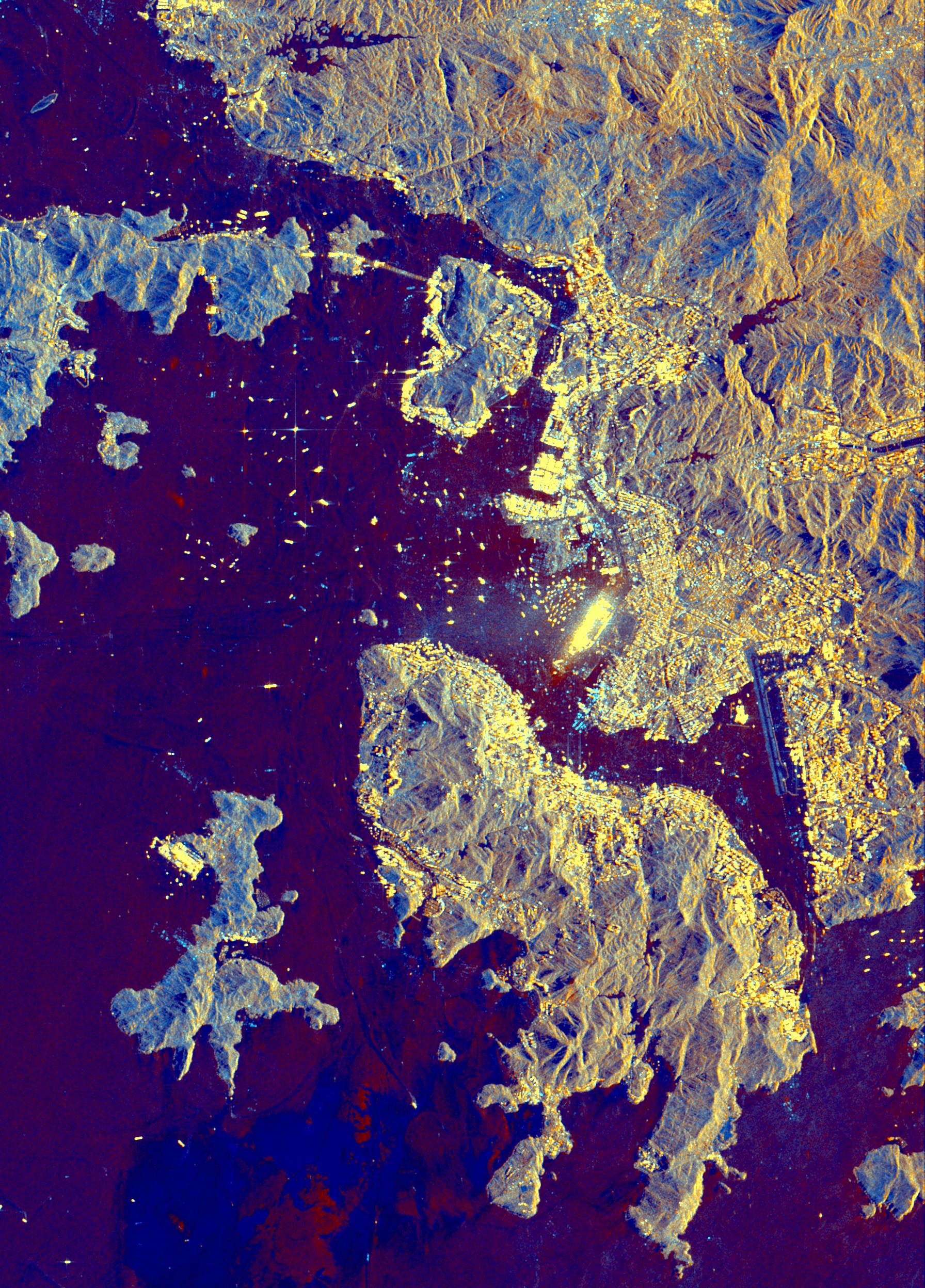 Waters of then-British Hong Kong as viewed from space in 1994. (Wikimedia Commons)

Hong Kong’s particular legal characteristics have not only enabled China to rise as an economic power and shelter foreign corporations from taxes and tariffs but they have also allowed an individual to get away with murder. That’s because Hong Kong lacks an extradition treaty for those who commit crimes in Taiwan and China. When a resident of Hong Kong was alleged to have murdered his pregnant girlfriend while on vacation in Taiwan in 2018, the accused fled back to Hong Kong where he couldn’t be prosecuted. Hong Kong’s administrative government attempted to amend its extradition law as a result of the incident. But protesters claimed extradition would extend to overreach by the People’s Republic and cause Hong Kong citizens to be deprived of their freedoms.

“There are two reasons why they chose the extradition law amendment bill as a turning point in their disruptive Hong Kong strategy. One is their failure to seize Hong Kong’s governing power through their political proxies with ‘true democracy’ as an excuse. The other one is the need to facilitate the U.S. government’s updated global strategy since 2018 that regards China as its main rival.” – Zhou Bajun.

The protesters looked to London to assist them in their cause. Wearing hardhats, they smashed into the Hong Kong legislative chambers and raised the Union Jack. On the street, people could be heard singing the British anthem “God Save the Queen” while waving the flag of their former colonial master.

But it’s not just the British that protesters appealed to for support. American flags were also prominent in street protests. The leader of the Hong Kong activist organization Demosisto, Joshua Wong, called for outside intervention by the U.S., Western Europe and Japan to “liberate Hong Kong.”

With Wong by her side, on Sept. 18, 2019, House Speaker Nancy Pelosi held a press conference in Washington on human rights in Hong Kong. Something not lost on astute observers was that she made a statement reminiscent of one delivered by Undersecretary of State Victoria Nuland in 2013, when, against the backdrop of a Chevron logo, Nuland praised “the brave people of the Maidan” as she encouraged the overthrow of the Ukrainian government in a color revolution. Pelosi welcomed the “very brave champions for democracy, for freedom of expression in Hong Kong,” advocating for the Hong Kong Human Rights and Democracy Act of 2019 (H.R. 3289) “to send an unequivocal message that the protesters of Hong Kong have the full support and backing of the United States in their quest for justice and freedom.”

On Oct. 13, in an interview with CBS “Face the Nation,”Ted Cruz, the U.S. senator from Texas, in a new rad persona, announced from Hong Kong: “I’m here, I’m dressed in all black standing in solidarity with the protesters.” (When asked about reported violence, Cruz later claimed not to have observed any.) 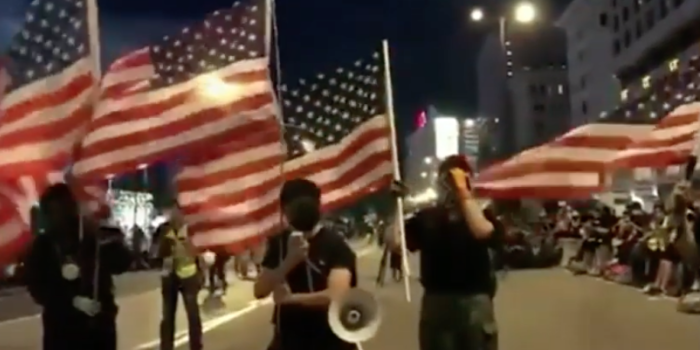 This color revolution is characterized by wearing black clothing. Fewer in number than the masses of protesters in the street were those among them disguised by masks and with helmets protecting their heads, causing mayhem by destroying the commons – subway stations, buses, and the Hong Kong International Airport – as well as local businesses. These actors wielded steel rods, have beaten people considered the opposition, and threw gasoline bombs at police. Asia Times columnist Pepe Escobar, who lived in Hong Kong, describes the destructive acts as black bloc tactics borrowed from anarchist groups but more incendiary than the usual.

Hong Kong protesters douse a man in gasoline and set him on fire only because he disagreed with them. pic.twitter.com/rj1jmHS47f Just like in Venezuela when an opposition mob burned Afro-Venezuelan Orlando Figuera alive for supporting the government. https://t.co/03Y5aCw9ET

Back in the U.S., the House of Representatives passed additional legislation based on the “responsibility to protect,” the humanitarian interventionist policy used to defend people in foreign countries from their own governments on the premise that they need to be protected and the U.S. should do it. The Hong Kong Human Rights and Democracy Act passed the House with bipartisan support on Oct. 15. The House also passed a resolution condemning the Chinese government in Beijing and, in addition, the Protect Hong Kong Act, which restricts non-lethal crowd control equipment exports to Hong Kong. (While in July, the U.S. State Department had approved $2 billion in arms sales to Taiwan and continues, under the 1033 program, to allow local U.S. law enforcement agencies to obtain surplus military equipment.) As of this writing, the Hong Kong bills are expected to pass in the Senate. 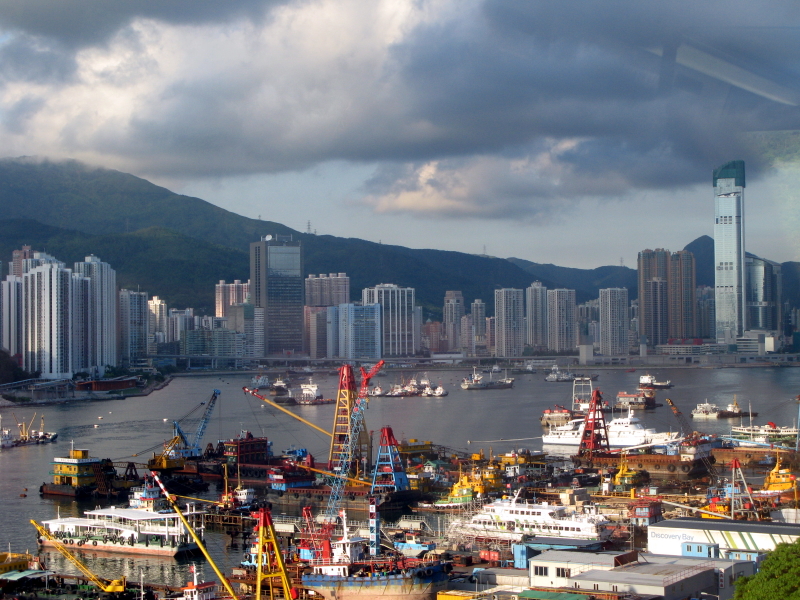 Comparing this to American media and government reactions to our own protests, the China Daily commented: “It’s not hard to imagine the United States’ reaction if Chinese diplomats met leaders of Occupy Wall Street, Black Lives Matter, or Never Trump protesters.”

The ordinary people of Hong Kong do have reason to be angry. The city is the most expensive in the world to live in with the highest rent, according to Deutsche Bank’s 2019 “Mapping the World’s Prices.” Many people experience extreme poverty. But their anger is directed at the Hong Kong city administration and Beijing, not the wealth gap.

Jimmy Lai, the Hong Kong billionaire and media mogul, widely believed to be funding the Hong Kong protests, came to the United States in early July to meet with Vice President Mike Pence, U.S. Secretary of State Mike Pompeo, National Security Advisor John Bolton, and some senators. His visit to Washington was preceded in March by a delegation of Hong Kong “democracy” advocates.

The National Endowment for Democracy (NED) fosters movements in foreign countries. Since its inception during the Reagan administration in 1983, the NED, a private foundation funded by the U.S. government but for which there is no government oversight, has been providing grants to nonprofit organizations, labor, and political parties in foreign countries to influence their populations. It boasts of the ability “to respond quickly where there is a need for political change.” In 1991, Allen Weinstein, NED founder and acting president said, “A lot of what we do today was done 25 years ago by the CIA.” David Ignatius as the foreign editor of the Washington Post, referred approvingly to the NED as “the sugar daddy of overt operations.”

“The NED should be called the “National Endowment for Attacking Democracy,” says Stephen Kinzer, who wrote “America’s Century of Regime Change from Hawaii to Iraq” (Henry Holt & Co., 2007).

In a not to be missed video, Mintpress News Editor Mnar A. Muhawesh pointed out that neo-cons, the notorious Elliot Abrams and Victoria Nuland [her again] sit on the NED board of directors. Muhawesh reports that:

“Since 2014, the year of Hong Kong’s Umbrella protests, the NED has officially poured over $29 million dollars into the island city in order to identify new avenues for democracy and political reform. But as the NED has already identified the Chinese government as despotic and a threat to democracy, this means that much of that money is de facto supporting groups to undermine that government and as Mintpress has previously reported much of that money went to the current groups that organized the protests.”

NOTE: Since this writing there is no longer access to Dimsum Daily through Google. The search engine is reported blocking sites critical of the Hong Kong protests.

Sara Flounders of the New York-based International Action Center, which advocates against war and racism, locates the Hong Kong demonstrations within a true global perspective of empire: “The escalating demonstrations are linked to the U.S. trade war, tariffs and military encirclement of China. Four hundred — half — of the 800 U.S. overseas military bases surround China.

Our antiwar call should be: “U.S. out of Hong Kong and the Asia Pacific!”

Mary Beaudoin is the editor of the “Women Against Military Madness Newsletter.”

This article is from the Women Against Military Madness Newsletter.

← PATRICK LAWRENCE: Now the Interim of US Self-Deception Over Bolivia
Iran’s ‘Only Crime Is We Decided Not to Fold’ →

12 comments for “The Nature of the Hong Kong Protests”