He is caged, and public support for him has been deliberately demolished. The Swedish legal parody did its job, writes Caitlin Johnstone.

Now that WikiLeaks founder Julian Assange is safely locked up in Belmarsh prison awaiting a U.S. extradition hearing, Sweden has, for a third time, dropped its rape investigation.

“After conducting a comprehensive assessment of what has emerged during the course of the preliminary investigation I then make the assessment that the evidence is not strong enough to form the basis for filing an indictment,” said Deputy Chief Prosecutor Eva-Marie Persson at a press conference in Stockholm on Tuesday. 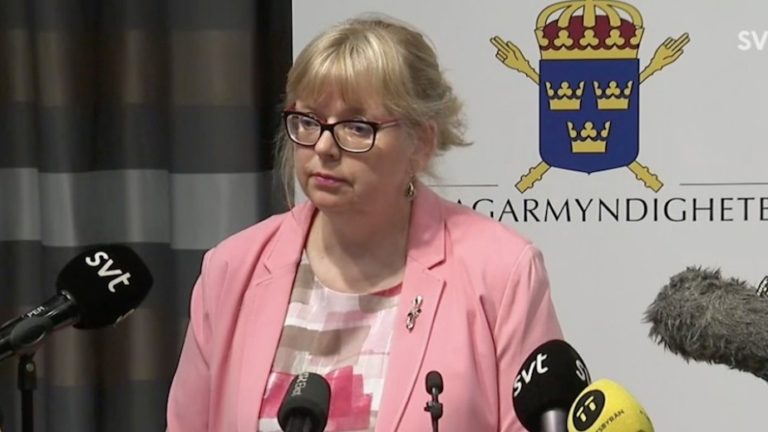 Deputy Chief Prosecutor Eva-Marie Persson at a press conference in Stockholm on Tuesday.

This decision comes days after the UN Special Rapporteur on Torture Nils Melzer began making noise about the Swedish government’s refusal to answer his questions on the many enormous, glaring plot holes in the investigation, which began in 2010. These plot holes include “proactive manipulation of evidence” with the testimony of the alleged victim, a condom provided as evidence that had neither the DNA of Assange nor of the alleged victim on it, complete disregard for confidentiality rules and normal investigative protocol from the earliest moments of the investigation onward, disregard for conflicts of interest, Sweden’s refusal to provide assurance that Assange would not be extradited to the U.S. if he went there to answer questions, statements made by the alleged victims which contradict the allegations, unexplained correspondence between Swedish prosecutors and the FBI, and many others.

#Sweden: FULL PIC of Govt's disappointing response to my detailed & diligent inquiries of 12 Sept & 28 May, flatly refusing:
– to explain its handling of the #Assange case
– to provide the requested information
– to engage in a constructive dialogue with #SRT@SwedenUN
#Torture pic.twitter.com/iqhPKbWfFi

None of which matters anymore. He is caged, and public support for him has been deliberately demolished. The Swedish parody of an “investigation” did its job. Assange took political asylum with the government of Ecuador out of fear of U.S. extradition and was slowly squeezed off from the outside world, his own reputation, and his own physical health while the empire prepared its case against him, keeping him increasingly immobilized, silenced and smeared until he could be forcibly pried from the embassy in April of this year.

Once this was accomplished, all the feigned concern for alleged victims of sexual assault suddenly vanished, lining up perfectly with a 2010 article authored in the early days of the investigation by feminist writer Naomi Wolf who said, “How do I know that Interpol, Britain and Sweden’s treatment of Julian Assange is a form of theater? Because I know what happens in rape accusations against men that don’t involve the embarrassing of powerful governments.”

“In other words: Never in twenty-three years of reporting on and supporting victims of sexual assault around the world have I ever heard of a case of a man sought by two nations, and held in solitary confinement without bail in advance of being questioned — for any alleged rape, even the most brutal or easily proven,” Wolf wrote. “In terms of a case involving the kinds of ambiguities and complexities of the alleged victims’ complaints — sex that began consensually that allegedly became non-consensual when dispute arose around a condom — please find me, anywhere in the world, another man in prison today without bail on charges of anything comparable.”

Everyone who was familiar with sexual assault investigations knew that Assange’s case was being treated wildly different from any other, and anyone with a shred of intellectual honesty knew that this was because his case was different from any other: it was an investigation of a man who had embarrassed powerful governments. That was always what this was about. It was never about protecting women. The fact that the case is being flushed now that the imperialists have gotten what they wanted makes this abundantly clear.

And now he’s locked up for no other reason than a pending U.S. extradition request, exactly as he anticipated and rightly tried to avoid. The ridiculous bail sentence he was serving has already expired, and the rape investigation everyone pretended was so important has been tossed aside like an old gum wrapper. As one reader put it on Twitter today, “So Julian Assange continues to be detained in a high security prison, having completed an extreme sentence for not meeting the bail conditions for a charge that wasn’t and won’t be made. All on top of the rules of asylum being cast aside to net him. This is rule of jackboot not law.”

“Let’s call this for what it is: an outrage,” the Defend Assange account tweeted after the news broke. “The road to Belmarsh and 175-years in prison was paved in Stockholm–and so it will be remembered. The damage done to Assange’s and WikiLeaks’ reputation-outing his name in an ‘investigation’ for which he was never charged-is monstrous.”

Monstrous it is. And monstrous the whole thing remains. They have maneuvered circumstances and narratives in such a way that they are now able to literally imprison a journalist for exposing U.S. war crimes, right in front of us, while telling us we live in a free society. It’s like watching someone who’s supposed to be your friend reach down and start strangling your dog to death while looking you right in the eye and saying “I’m not killing your dog. I would never do that. We’re friends.”

While the world knows Julian's name has been cleared in Sweden, he is sitting in a cell in Belmarsh prison, probably unaware of the news. The Prison cancelled all visits today.
Don´t Extradite Assange! pic.twitter.com/WhhIEGZSyA

But all that means is that now his fate is in our hands. Back when he was strong and bright-eyed and had a voice, it was easy to kid ourselves and say “Eh, he’ll find a way out of this. He’s the smartest guy around!” It was easy to lean on his strength in order to abdicate our responsibility to defend him tooth and claw from a globe-spanning oligarchic empire which seeks to criminalize holding power to account.

We can’t do that anymore. We can’t take comfort in Assange’s power, because he doesn’t have it anymore. His frailty now means we need to be the strong ones. We need to fight for him, because he can’t do it himself. We need to win this battle if we’re ever to have any hope of overturning the status quo that is oppressing us all and shoving us toward greater and greater peril. We can’t afford to lose this one. We need to fight for Assange like the world depends on it. Because, in a very real sense, it does.

21 comments for “With Assange Safely Locked up, Sweden Drops ‘Investigation’”