The tactics used to fight against decolonization are what we call a “hybrid war,” writes Vijay Prashad. As the generals do the dirty work, the aims of international capital are eventually met. 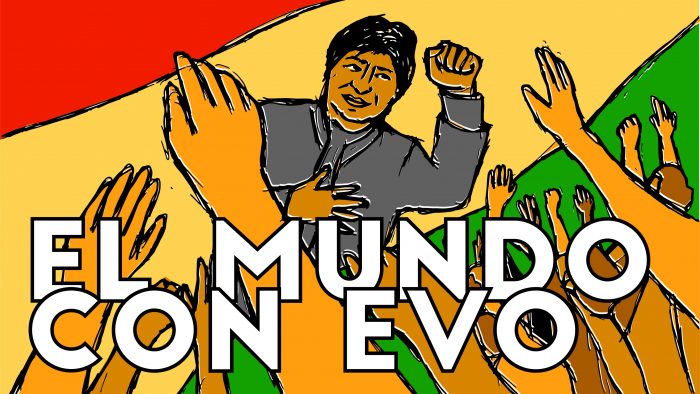 On Nov. 10, Bolivia’s President Evo Morales Ayma was removed from office. Technically Morales resigned, but the conditions for his resignation had been set by the Bolivian oligarchy (egged on for 13 years by the United States government, as Noam Chomsky and I indicated in this statement the day before the coup).

Having won re-election for the fourth time, Morales faced an open insurrection from his opponent — former president Carlos Mesa — who lost the election conclusively. A team from the openly hostile Organization of American States (OAS) arrived and provided legitimacy for the coup with a report on the elections that was long on accusations and short on facts. Using this OAS report — fully backed by the United States — as justification, the police mutinied, and then the army (which had remained neutral) told Morales he had to resign. There was no choice.

A coup is a curious thing. Those who make the coup never admit that they have made the coup. They claim that they are restoring democracy or that they are taking extraordinary means to establish the conditions — eventually — for democracy. This is precisely why the definition of the events are so fraught. But all coups are not the same. There are at least two types of military coups — the General’s Coup and the Colonel’s Coup.

It has been a long time since we have seen a classic Colonel’s Coup, perhaps the last major successful one being in Upper Volta (later Burkina Faso) in 1983 when Captain Thomas Sankara took office. These coups, from that of Egypt in 1952 onwards, are driven by non-commissioned officers who have a close fealty to the working-class, the peasantry, and the urban poor; their coup is often against the oligarchy and in favor of some variety of socialism (the Bolivian National Revolution of 1952 falls into this category).

The General’s Coup, on the other hand, is conducted by commissioned officers who come from the oligarchy or whose interests are closely associated with the oligarchy. These counter-revolutionary coups are the most commonplace (and have been very common in Bolivia — 1964, 1970, 1980 and 2019). General Williams Kaliman, who called on Morales to resign and who was trained by the United States at its notorious Schools of the Americas, has effectively led a General’s Coup against the government of the Movement for Socialism (MAS).

Such events as a coup are merely events of a longer-term structure, a long struggle between the forces of imperialism and of decolonization.

In 1941, the U.S.-based Council on Foreign Relations produced a key document for the U.S. State Department – “Methods of Economic Collaboration: The Role of the Grand Area in American Economic Policy.”

The council defined the “Grand Area” as encompassing the entire Western hemisphere, large parts of Europe, the British Empire, the Dutch East Indies, and the Pacific Rim (including China and Japan). The countries of the Western hemisphere, which included all of the Caribbean and Latin America, would be a “source of raw materials and a market for manufacturers.” This was the 20th century version of the 1823 Monroe Doctrine.

But it was key that the U.S. seek this kind of power without the appearance of colonialism. In 1962, the Kennedy administration underlined this problem. “It is important for the U.S. to remain in the background, and where possible, to limit its support to training, advice, and material, lest it prejudice the local government effort and expose the U.S. unnecessarily to charges of intervention and colonialism.”

The tactics used to fight against decolonization are what we call a hybrid war. Better to let the generals – from Augusto Pinochet in Chile to Kaliman now in Bolivia – do the dirty work, while the U.S. embassy remains unblemished, and as the aims of international capital are eventually met.

Since Morales was first elected in 2006, he has overseen an improvement of the livelihood of the Bolivian people. Two-thirds of Bolivians are – like Evo Morales – from an indigenous background. That he put the well-being of the indigenous majority first rankled the old oligarchy.

‘We Nationalized Our Natural Resources’

At the United Nations this year, Evo Morales said that, since 2006,  Bolivia has cut it poverty rate from 38.2 percent to 15.2 percent, increased its life expectancy rate by nine years, developed a Universal Health Care system, and ensured that over a million women received land tenure. Today, the country is now 100 percent literate and has a parliament where more than 50 percent of the elected officials are women. How did Bolivia do this? “We nationalized our natural resources,” Morales said, “and our strategic companies. We have taken control of our destiny.”
“Bolivia,” Morales said, “has a future.” That future is now in doubt.

Morales and his closest associates had taken refuge in Mexico. As the coup regime began to consolidate power, MAS said that the people of Bolivia “begin the long road of resistance to defend the historical achievements of the first indigenous government.”

As they drafted this text, the coup regime tore the flag of the indigenous – the Wiphala – down from buildings, burned them, and replaced them with the Bolivian national flag.

“Over the coming days,” said the MAS, the “hunting down of our comrades will continue. Our responsibility is to safeguard one another like a family, to rebuild the social fabric, to care for and protect our persecuted leaders. Today is the moment of solidarity. Tomorrow will be the time for reorganization.”

Morales’s great humanity came out in his statement – not even a day after the coup – that “as a human being” he implored health workers and teachers to tend to the population with “warmth and solidarity.” 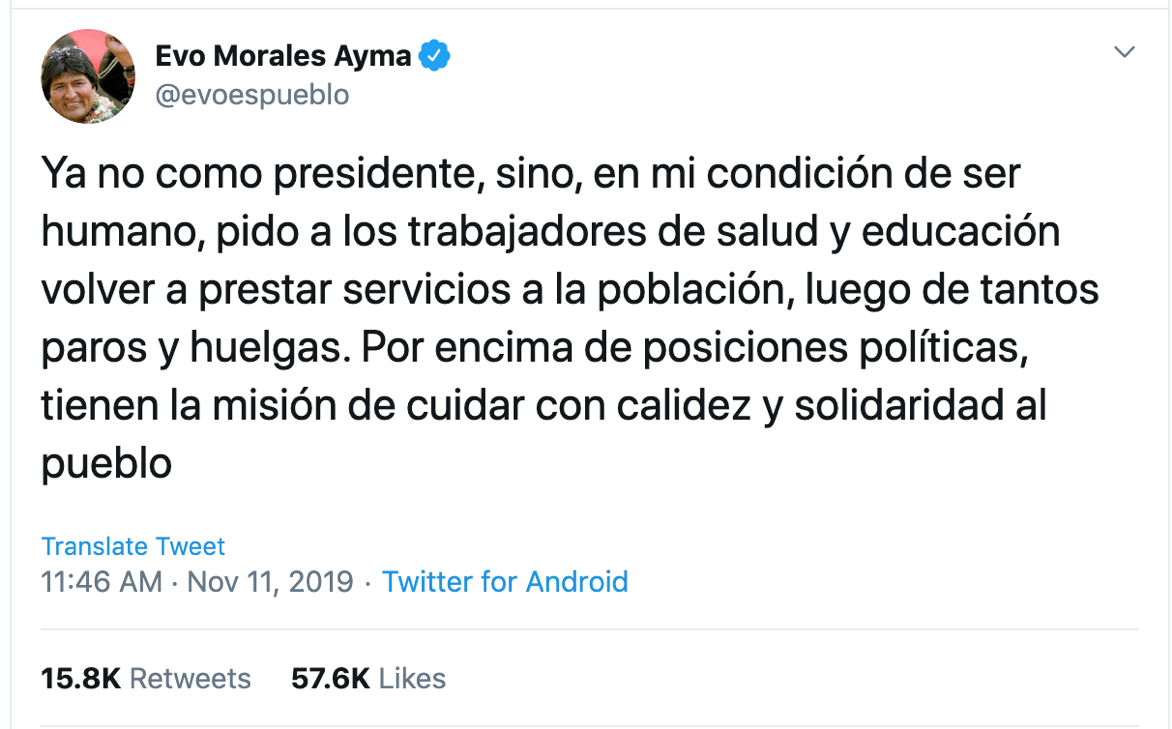 In 1868, Britain’s ambassador insulted General Mariano Melgarejo, Bolivia’s dictator. Melgarejo paraded the ambassador down the streets of La Paz on a donkey. Hearing of this, Britain’s Queen Victoria demanded that the Royal Navy bomb the city. When she was told that La Paz was up in the Andes, she said, “Bolivia does not exist.”

Bolivia might have been erased from the maps, but it remained a major source of silver and tin for trans-national firms from Europe and the United States of America. It continues to remain a major source of tin and today it is home to up to 70 percent of the world’s lithium supply.

The demand for lithium — used for batteries for electric cars and electronic devices such as cell phones — is expected to more than double by 2025. Morales’s government set high standards for its mining partnerships: it demanded that at least half of the control of the mines remain with Bolivia’s national mining firms, and that the profit from the mines be used for social development.

Transnational firms sued Bolivia for breaking its contracts and rejected the new standard set by the Morales government. The only firms that agreed to the Bolivian position came from China. As Morales’s government cut deals with Chinese firms, this aggravated not only the transnational firms but also their governments (the United States, Canada, and the European Union). One aspect of the coup is for these companies to gain control of Bolivia’s natural resources — notably lithium, which is essential to electric cars. 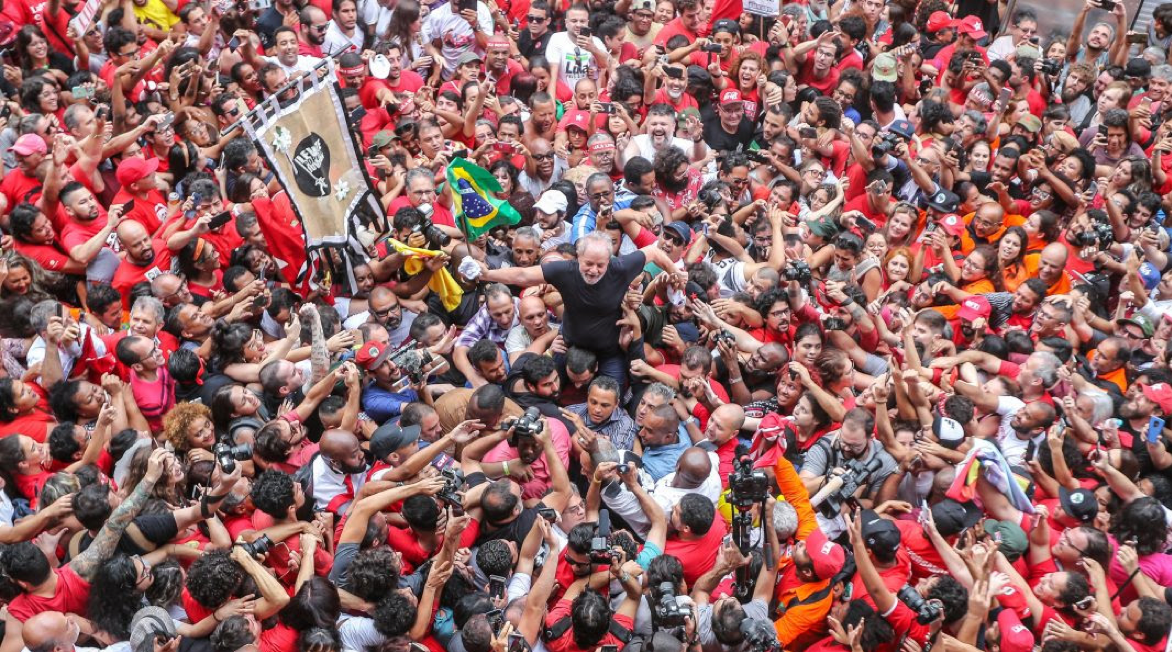 Lula on the streets of São Paulo, November 2019. (Ricardo Stuckert)

Yet another is to remove one more pole of the “turn to the left” in South America, which includes the electoral victory of the Left in Argentina and the release of Brazil’s former president Luis Inacio Lula da Silva, or Lula, from prison. Bolivia’s Vice President Álvaro García Linera’s words are a reminder of the turbulence of class struggle, which finds itself in the brave struggles of the Bolivian people on their streets against this coup:

We have difficult times ahead, but for a revolutionary the difficult times are our force. We live from this, we are strengthened from this, from the difficult times. Were we not those who came from below? Are we not the persecuted, the tortured, the marginalised, of the times of neoliberalism? We have in our bodies the traces and the injuries of struggle from the 1980s and 1990s. And if today, provisionally, temporarily, we have to continue to the struggles of the 1980s, of the 1990s, of the 2000s, then welcome. This is what revolutionaries are for. To struggle, win, fall, get back up, struggle, win, fall, get back up. Until our lives are over, this is our destiny. 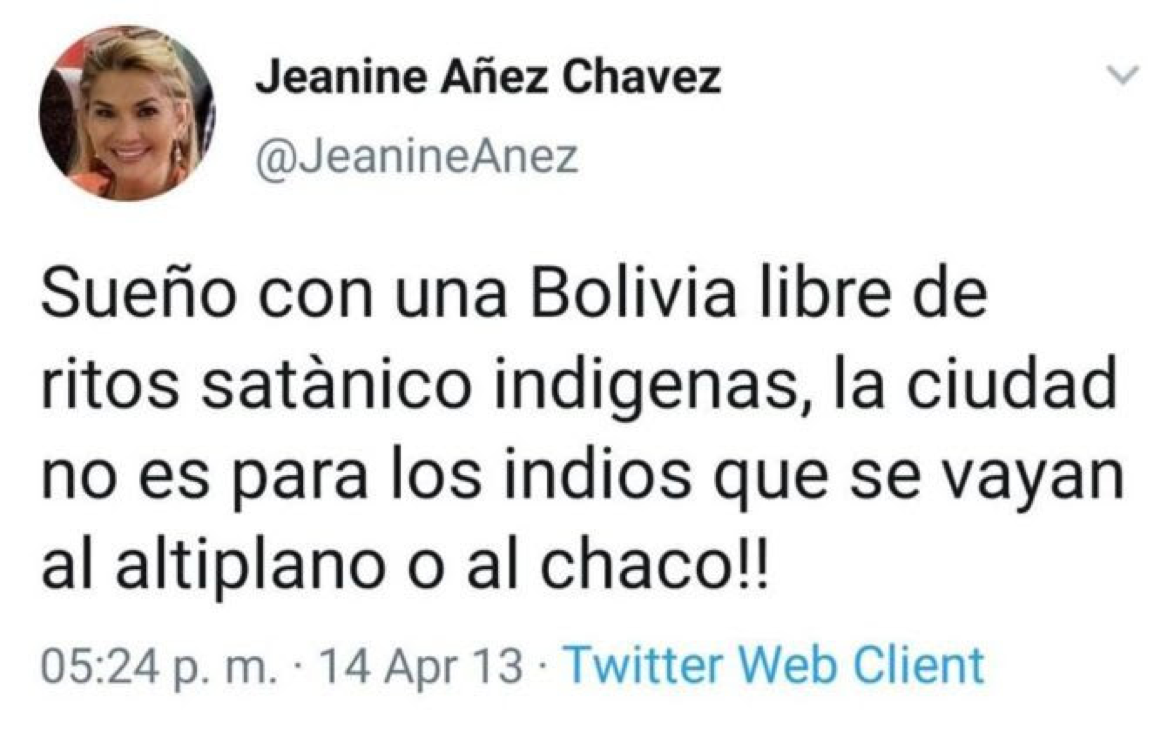 Meanwhile, Bolivia’s self-proclaimed president Jeanine Añez Chavez is on records as having said, “I dream of a Bolivia free of satanic indigenous rites. The city is not for Indians; let them go back to the highlands or the Chaco.” Apart from everything, this was a racist coup.

12 comments for “Bolivia Does Not Exist”