As usual, the mass media’s reporting on this story is in full alignment with the U.S. State Department, writes Caitlin Johnstone. 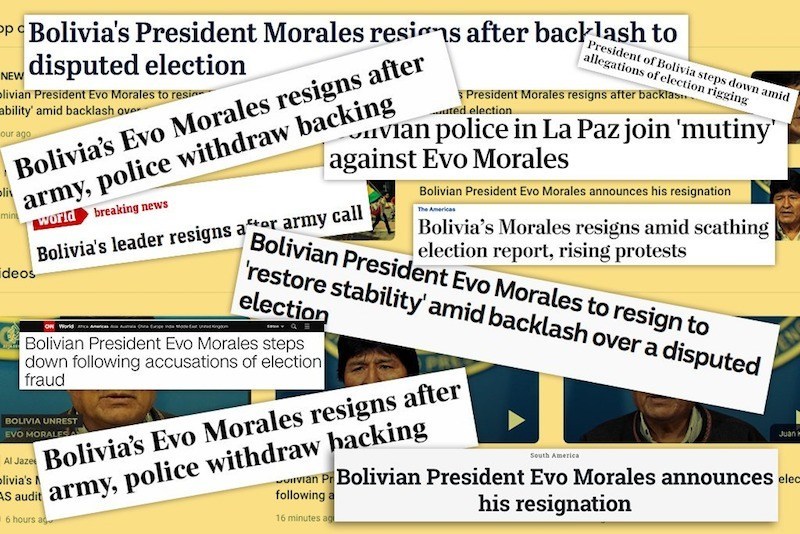 There has been a military coup in Bolivia backed by violent right-wing  rioters and the U.S. government, but you’d hardly know this from any of the mainstream media headlines.

“President of Bolivia steps down amid allegations of election rigging” we are informed by Telegraph.

So, there you have it. The indigenous leader of a socialist South American government which has successfully lifted masses of people out of crushing poverty, which happens to control the world’s largest reserves of lithium (which may one day replace oil as a crucial energy resource due to its use in powering smartphones, laptops, hybrid and electric cars), which has an extensive and well-documented history of being targeted for regime change by the U.S. government, simply stepped down due to some sort of scandal involving a “disputed election.” Nothing to do with the fact that right-wing mobs had been terrorizing this leader’s family, or the fact that the nation’s military literally commanded him to step down and are now currently searching for him to arrest him, leading to ousted government officials being rounded up and held captive by soldiers wearing masks.

All perfectly normal and not suspicious at all.

Fully support the findings of the @OAS_official report recommending new elections in #Bolivia to ensure a truly democratic process representative of the people’s will. The credibility of the electoral system must be restored.

As is usual, mass media’s reporting on this story is in full alignment with the U.S. State Department, with Secretary of State Mike Pompeo also advancing the “disputed election” line in a tweet shortly before the forced resignation of Morales. Pompeo cited the evidence-free and discredited allegation of suspicious vote tallies during Morales’s re-election last month from the Washington-based Organization of American States (OAS). As Mark Weisbrot of the Center for Economic & Policy Research explains in a recent article for The Nation, the OAS receives 60 percent of its funding from Washington, which gives the U.S. tremendous leverage over the supposedly neutral and international body. This ties in interestingly with what we discussed the other day about Washington’s known history of using its disproportionate financial support for the Organization for the Prohibition of Chemical Weapons as leverage to force that supposedly neutral and international body to comply with U.S. agendas.

They never did find any evidence of fraud in the October 20th election, but the media repeated the allegation so many times that it became "true," in this post-truth world. Thread: https://t.co/8oWFNKNebT

The U.S.-centralized empire just keeps throwing coup attempts at unabsorbed governments until they stick. The coup in Venezuela failed in 2002 and again in 2019, but they’ll just keep attempting them until one takes hold. A kickboxer throws strikes in combinations with the understanding that most attacks will miss or do minimal damage against a trained opponent, but eventually one will get through and score the knockout blow. Imperialist regime change agendas employ the same punches-in-bunches philosophy: just keep attacking and undermining at every possible turn, and eventually something will stick.

And the empire can afford to do this. When you have all the power and resources, you can bide your time, knowing that if the current attempt at toppling the government in a sovereign nation fails, there’s always tomorrow.

At a United Nations Security Council meeting last year, Morales summed up the true nature of America’s role in the world very accurately, and, it turns out, very presciently.

“I would like to say to you, frankly and openly here, that in no way is the United States interested in upholding democracy,” Morales said. “If such were the case it would not have financed coups d’etat and supported dictators. It would not have threatened with military intervention democratically elected governments as it has done with Venezuela. The United States could not care less about human rights or justice. If this were the case, it would have signed the international conventions and treaties that have protected human rights. It would not have threatened the investigation mechanism of the International Criminal Court, nor would it promote the use of torture, nor would it have walked away from the Human Rights Council. And nor would it have separated migrant children from their families, nor put them in cages.”

“The United States is not interested in multilateralism,” Morales continued. “If it were interested in multilateralism it would not have withdrawn from the Paris Agreement or given the cold shoulder to the global compact on migration, it would not have launched unilateral attacks, nor have taken decisions such as illegally declaring Jerusalem to be the capital of Israel. This contempt for multilateralism is motivated by the thirst of the United States for political control and for the seizing of natural resources.”

“Each time that the United States invades nations, launches missiles, or finances regime change, it does so behind a propaganda campaign which incessantly repeats the message that it is acting in the course of justice, freedom and democracy, in the cause of human rights or for humanitarian reasons,” Morales also said.

“The responsibility of our generation is to hand over a fairer and more secure world to the following generation,” Morales concluded. “We will only achieve this dream if we work together to consolidate a multipolar world, a world with common rules that are respected by and defended from all the threats ranged against the United Nations.”

Indeed, the only reason the U.S. is able to wage its endless campaign of regime change agendas against unabsorbed governments is because the unipolar world order it rules has allowed it the power, resources and leisure to do so. A multipolar world would enable the citizenry of this planet to have a say in what happens to them in a way that is not dictated by a few sociopaths in and around Washington, DC. A multipolar world is to democracy as a unipolar world is to monarchy. The citizens of the world should oppose this unipolarity.

← VETERAN’S DAY: Watching My Students Turn into Soldiers of Empire
Released Lula in Greatest Fight of His Life →