Issa Sikiti da Silva reports on the struggles for many in the Sahel, the area between the Sahara in the north and the Sudanian Savanna in the south where temperatures are rising faster than anywhere else on Earth. 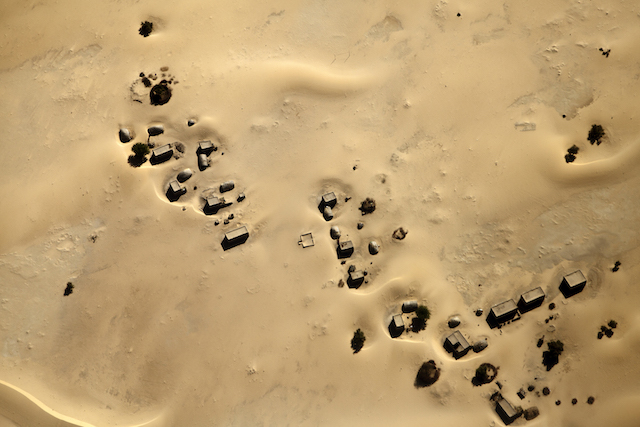 Aerial view of settlements in area of desert near Timbuktu, north of Mali. (UN/Marco Domino)

Abdoulaye Maiga proudly displays an album showing photos of him and his family during happier times when they all lived together in their home in northern Mali. Today, these memories seem distant and painful.

“We lived happily as a big family before the war and ate and drank as much as we could by growing crops and raising livestock,” he tells IPS.

“Then the war broke out and our lives changed forever, pushing us southwards, finally settling in the region of Mopti. Then we went back home in 2013 when the situation stabilized,” Abdoulaye explains.

In 2012, various groups of Tuareg rebels grouped together to form and administer a new northern state called Azawad. The civil strife that resulted drove many from their homes, with communities often fleeing with their livestock, only to compete for scarce natural resources in vulnerable host communities, according to the United Nations.

After the security situation began to improve in 2013, many returned home to rebuild their lives and livelihoods.

But soon it was the turn of the expanding Sahara Desert, drought and land degradation that became the next driver of their displacement.

“As time went by, the land became useless and we found ourselves having no more land to work on. Nothing would come out that could feed us, and our livestock kept dying due the lack of water and grass to eat,” Abdoulaye recalls.

“Drought across the Sahel region, followed by conflict in northern Mali, caused a major slump in the country’s agricultural production, reducing household assets and leaving many of Mali’s poor even more vulnerable,” FAO says.

“We used to move up and down with our livestock, looking for water and grass, but most of the times we found none. Life was unliveable. The Sahara is coming down, very fast,” Abdoulaye says emotionally.

In the end, the Maiga family had to leave their home and broke up; Abdoulaye and his brother Ousmane heading to Benin’s commercial capital Cotonou in 2015, after a brief stint in Burkina Faso, as the rest of their family headed for Mali’s capital, Bamako. 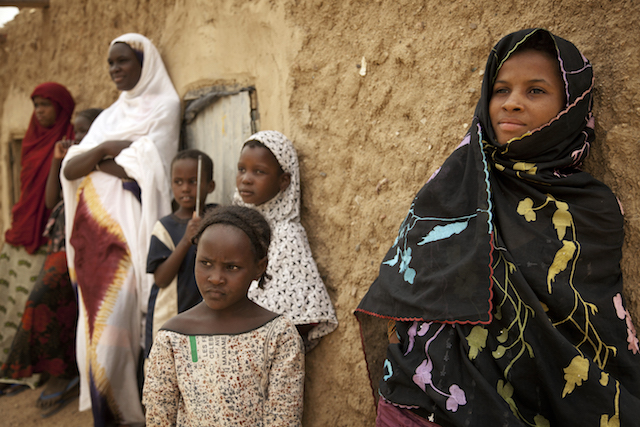 The UN says nearly 98 percent of Mali is threatened with creeping desertification, as a result of nature and human activity. Besides, the Sahara Desert keeps expanding southward at a rate of 48 km a year, further degrading the land and eradicating the already scarce livelihoods of populations, Reuters reported.

The Sahara, an area of 3.5 million square miles, is the largest ‘hot’ desert in the world and home to some 70 species of mammals, 90 species of resident birds and 100 species of reptiles, according to DesertUSA. And it is expanding, its size is registered at 10 percent larger than a century ago, LiveScience reported.

The Sahel, the area between The Sahara in the north and the Sudanian Savanna in the south, is the region where temperatures are rising faster than anywhere else on Earth.

Roughly 40 percent of the world’s degraded land is found in areas with the highest incidence of poverty and directly impacts the health and livelihoods of an estimated 1.5 billion people, according to the UN.

In a country where 6 million tonnes of wood is used per year, reports say Malians are mercilessly smashing their already-fragile landscape, bringing down 4,000 square kilometres of tree cover each year in search for timber and fuel.

Lack of rain has also been making matters worse, especially for the cotton industry, of which the country remains the continent ’s largest producer, with 750,000 tonnes produced in the 2018 to 2019 agriculture season. Environmentalists believe Mali’s average rainfall has dropped by 30 percent since 1998 with droughts becoming longer and more frequent.

“And of course, that may lead a few disenchanted members of the population, particularly young men, to be attracted by alternative livelihood options, including the money that can be offered by trafficking gangs or terrorist groups,” he says.

Ousmane echoes Melly’s sentiments, saying: “The temptation is too much when you live in desertification-hit areas because you don’t get enough food to hit and water to drink.

“That’s where the bad guys start showing up on your door[step] to tell you that if you join them, you will get plenty food, water and pocket money. The solution is to run away, as far as you can to avoid falling into that trap.”

Consequently, Ousmane and Abdoulaye sold the few remaining animals the family had so they could leave the country.

In Burkina Faso they hoped to find work in farming.

However, they were not always welcomed.

“We could feel the resentment from locals, so I told my brother we should leave before it gets ugly because there were already some tensions between local communities over what appeared to be land resources,” he says.

Chatham House’s Melly confirms this: “There is no doubt that the overall context, of increasing pressure on fragile and sometimes degrading natural resources, is a contributory factor to the overall pressures in the region and, thus, potentially, to tension.”

Like elsewhere on the continent, severe environmental degradation appears to be among the root causes of inter-ethnic conflicts.

Using the Darfur region as a case study, the Worldwatch Institute says: “To a considerable extent, the conflict is the result of a slow-onset disaster—creeping desertification and severe droughts that have led to food insecurity and sporadic famine, as well as growing competition for land and water.”

What is Being Done?

Projects such as the UN Convention to Combat Desertification’s Land Degradation Neutrality project aimed at preventing and/or reversing land degradation are some of the interventions to stop the growing desert.

But there remain gaps and many in Mali still remain affected.

“It is not easy to live in these areas. People there face double threats. It is double stress to flee from both armed conflict and desertification. And such people need to be welcomed and assisted, and not be seen as a threat to locals livelihoods.

“That is why we used to preach tolerance and solidarity wherever we went, to avoid a situation whereby local communities would feel that their meagre resources are under threat from newcomers. There should be a dialogue, an honest and frank dialogue when communities take on each other over land and water resources,” he advises.

Against the expanding Sahara, all are equal. Fadimata, an internally displaced person from northern Mali, tells IPS that climate change is affecting everyone in the Sahel, including terrorists.

“I saw with my own eyes how a group of heavily-armed young men came to a village, looking for food.

“They said they wanted to do no harm, but wanted something to eat. Of course, we were very scared, but the villagers ended up putting something together for these poor young men. They sat down and ate, and drank plenty of water and left afterwards. I think it is better that way than to kill villagers and steal their food, livestock and water.”

This article is from  Inter Press Service

← Misogyny, Male Rage & the Words Men Use to Describe Greta Thunberg
Lower Refugee Limits are Weakening Resettlement in US →