The CIA agent who was imprisoned after bringing a racial discrimination case against the agency has written a gripping David-and-Goliath account of being greatly wronged and coming out stronger on the other side.

I had the pleasure this week of introducing CIA whistleblower Jeffrey Sterling upon the launch of his new book, “Unwanted Spy” at an independent bookstore in Washington, D.C.  Sterling was released from prison last year after spending three years there following his unjust conviction on seven espionage charges, ostensibly for leaking classified information to former New York Times reporter James Risen.

Sterling steadfastly maintained his innocence, refusing to ever consider a plea bargain. He believed that as soon as he could get in front of a jury (in the notorious Eastern District of Virginia, and in front of the notorious Judge Leonie Brinkema) they would see how ridiculous the charges were and would acquit him.  But he was wrong.  The fix was in.

Last July, Sterling’s publisher sent me an advance copy of “Unwanted Spy” and asked for a blurb.  I took it with me on a flight to Greece and, having missed a connection in Athens, sat down to read it.  I quite literally couldn’t put it down, and I finished it in one sitting. 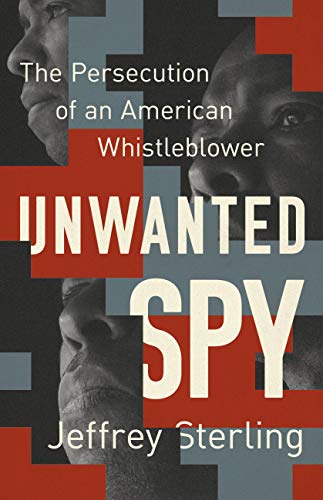 I’ve known Jeffrey Sterling for years.  He was a highly-regarded CIA case officer and Iran expert who was also fluent in Farsi.  He was supposed to be sent to the Middle East to recruit spies to steal secrets, but at the last minute — after his personal effects were put on a ship and sent to his would-be post — his position was withdrawn and he was instead offered a dead-end job in Africa.  He went to his boss to complain.  His talents would go to waste in Africa, he said.  His boss’s response would change the course of Sterling’s life. “We think a big black guy speaking Farsi would look strange.”

“When did you realize I was black?” was Sterling’s response.

Sterling went on to file a racial discrimination suit against the CIA, and Jim Risen was interested in the story for The New York Times.  That’s how Sterling and Risen met.  But the CIA and the Justice Department would later accuse Sterling of revealing top-secret information related to a botched attempt to disrupt the Iranian nuclear program, something called “Operation Merlin,” to Risen.  The government’s case that these conversations were about Iran and not about a racial discrimination suit was based entirely on metadata.  Sterling and Risen held dozens of phone calls over 18 months, the Justice Department said, alleging that the calls were for Sterling to pass Risen classified information.

There was no proof, however, that any such conversations had ever taken place.  And indeed, an early target of the Justice Department’s investigation into the leak, a House Intelligence Committee staff member, was fired during the same period. Why?  For having unauthorized contact with James Risen. Given the existence of other legitimate suspects in the leak, why then did the FBI focus solely on Sterling? It was because he had aired the CIA’s dirty laundry.  He had revealed the secret.  The CIA has a history of racism.  There was still discrimination against African-Americans.

The government did what it does well. It chose a target, a victim, and set out to ruin him.  That was Jeffrey Sterling.  As in the cases of NSA whistleblowers Tom Drake, Bill Binney, and Kirk Weibe, and in my own whistleblowing case, the purpose was not necessarily to send Sterling to prison for the rest of his life, or even for a long time.  It was to frighten any other would-be whistleblower, anybody considering bringing to light evidence of waste, fraud, abuse, illegality, or threats to the public health or public safety.  Scott Shane, a reporter for The New York Times, said that on the day of my arrest, for example, every one of the Times’s national security sources went completely silent.  That was the goal.

But Jeffrey Sterling would not remain silent. It may sound like a cliché, but it’s true:  They thought they could break him and they failed.  It was Sterling and his whistleblowing who inspired Terry Albury, the FBI agent who went to The Intercept with evidence of racial discrimination at the FBI.  It was Sterling who showed the country that the CIA had a history of racial discrimination that it continues to deny. It was Sterling who refused to be bowed by the weight of the CIA and the FBI coming down on his head.  He won’t just go away quietly.

“Unwanted Spy” is a gripping and eminently readable David and Goliath account of a man being wronged by the government, by the “deep state,” and coming out stronger on the other side.  You’re going to want to read this book.  It’s a life lesson for all of us.

← THE ANGRY ARAB: Trump & the Turkish Invasion of Northern Syria
US Democrats Cultivated the Barbarism of ISIS →