A judge at a hearing in London has denied the WikiLeaks’ publisher more time to prepare his defense, while a group of Australian politicians coalesce around a demand to return Julian Assange home.

The judge in Julian Assange’s extradition process on Monday denied his lawyer’s appeal for more time to prepare his case as the imprisoned WikiLeaks publisher weakly told the court he was unable to “research anything” in the conditions under which he is being held in high-security Belmarsh Prison.

Assange appeared in person at Westminster Magistrate’s Court in London Monday morning for a case management hearing on the request by the United States for Assange to be sent to Virginia to face 18 charges, including allegedly violating the U.S. Espionage Act for possessing and disseminating classified information that revealed prima facie evidence of U.S. war crimes.

Mark Summers, Assange’s lawyer, told the court the charges were “a political attempt” by the U.S. “to signal to journalists the consequences of publishing information.” The Espionage Act indictment against Assange by the Trump Administration is the first time a journalist has been charged under the 1917 Act for publishing classified material.

“It is legally unprecedented,” Summers told Judge Vanessa Baraitser. He argued that President Donald Trump was politically motivated by the 2020 election to pursue Assange.

Summers also argued before Baraitser that the U.S. “has been actively engaged in intruding into privileged discussions between Assange and his lawyers.” It was revealed this month that the Central Intelligence Agency was given access to surveillance video shot by a private Spanish company of all interactions Assange had with lawyers, doctors and visitors.

“This is part of an avowed war on whistleblowers to include investigative journalists and publishers,” Summers said. “The American state has been actively engaged in intruding on privileged discussions between Mr Assange and his lawyer.”

Because of this surveillance, including “unlawful copying of their telephones and computers” as well as “hooded men breaking into offices,” Assange’s lawyers needed more time to prepare his defense, Summers argued. But Baraitser refused the request, and ordered Assange back in court for a second management hearing on Dec. 19. The full extradition hearing is scheduled to begin on Feb. 25 next year. 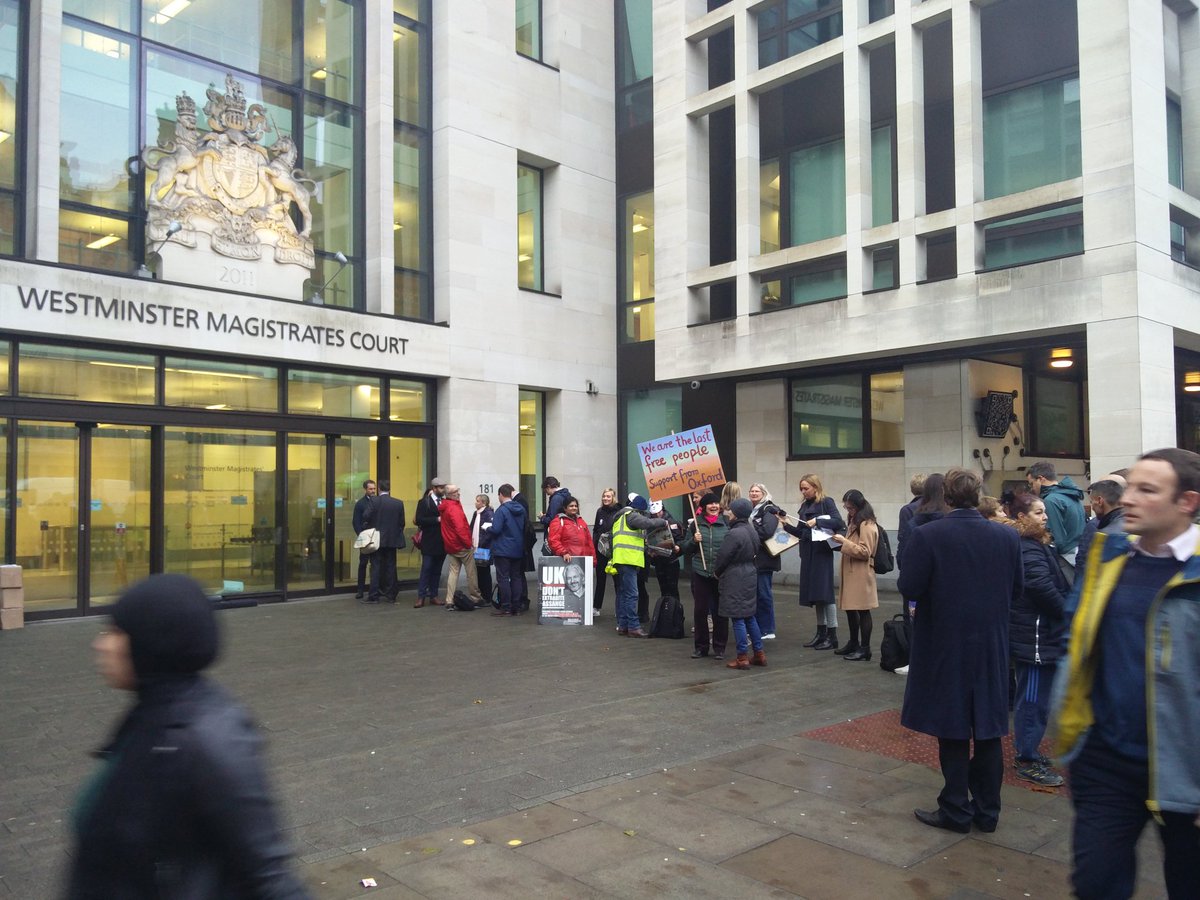 As the hearing ended Monday, Baraitser asked Assange if he understood what had just transpired. “Not really. I can’t think properly,” he said.

“I don’t understand how this is equitable. This superpower had 10 years to prepare for this case and I can’t access my writings. It’s very difficult where I am to do anything but these people have unlimited resources. They are saying journalists and whistleblowers are enemies of the people. They have unfair advantages dealing with documents. They [know] the interior of my life with my psychologist. They steal my children’s DNA. This is not equitable what is happening here.”

The Guardian quoted WikiLeaks Editor-in-Chief Kristinn Hrafnsson as saying that Assange’s case should be thrown out because of interference with preparing his defense. “Not only is it illegal on the face of the treaty, the U.S. has conducted illegal operations against Assange and his lawyers which are the subject of a major investigation in Spain,” Hrafnsson said.

According to witnesses in the courtroom, Assange appeared physically and mentally enfeebled after months in isolation in prison. Tristan Kirk, correspondent for the London Evening Standard, tweeted: “Julian Assange struggled to say his own name and date of birth as he appeared in the dock. He claimed to have not understood what happened in the case management hearing, and was holding back tears as he said: ‘I can’t think properly.’”

In response to Kirk’s message, Assange’s mother, Christine Assange, tweeted: “This breaks my heart! They are breaking my beautiful bright, brave journalist son, the corrupt bastards!”

This breaks my heart!

They are breaking my beautiful bright, brave journalist son, the corrupt bastards!#STOPtheTORTURE#FreeAssangeNOW#NoUSExtradition https://t.co/4xV7d8g3I4

Assange’s supporters swarmed the van in which Assange was driven away from the courthouse back to his dreary isolation in the hospital ward at Belmarsh.

Assange's supporters converge on van thought to be returning the Wikileaks founder to Belmarsh prison pic.twitter.com/qaHzM4tBA7

Speaking outside the courthouse after the hearing, journalist John Pilger called the legal assault on Assange a “deliberate action of a rogue state, a state that ignores its own laws and international law.”

John Pilger outside Westminster court denounced the brutal treatment of Assange as the actions of a "rogue state"@SEP_Britain#DontExtraditeAssange pic.twitter.com/mhOnvu62NL

“There were people crying in the gallery,” said Assange supporter Emmy Butlin. “He is like a ghost. He could hardly talk. He’s dying.”

Meanwhile in Assange’s native Australia, members of Parliament have demanded that Assange be returned to his country.

MP Andrew Wilkie told the House of Representatives last week that Assange is “an Australian citizen and must be treated like any other Australian. He was not in the U.S. when he provided evidence of U.S. war crimes in Iraq. He can’t possibly have broken their laws.”

If Assange is extradited, Wilkie said he

“faces serious human rights violations including exposure to torture and a dodgy trial. And this has serious implications for freedom of speech and freedom of the press here in Australia, because if we allow a foreign country to charge an Australian citizen for revealing war crimes, then no Australian journalist or publisher can ever be confident that the same thing won’t happen to them. Put simply, he must be allowed to return to Australia.”

Wilkie, an Australian former intelligence officer who resigned because of the falsehoods about WMD in Iraq before the 2003 invasion, is reportedly working to set up a parliamentary committee that crosses party lines to demand that the Liberal government of Prime Minister Scott Morrison opposes Assange’s extradition.

The Australian TV program “The Project” reported on Sunday that up to 10 politicians were ready to join the committee.

“It’s important that parliamentarians learn the facts of this matter,” Wilkie told the program. “There’s so much naiveté and ignorance and disinformation swirling around that it’s no wonder that a lot of people are wary or even dislike Julian, but I reckon that when people find out the facts of the matter they will get behind him.

“This is about the right of person not to be extradited to another country based on a whim or the politics of it. The whole thing stinks quite frankly, I think he should be allowed to come to Australia.”

Julian Assange returns to court in London tomorrow – where his lawyers will outline their case against his extradition to the United States, on spying charges.
As he sits in a cell, Aussie MPs from across the political spectrum are banding together, in a bid to bring him home. pic.twitter.com/SdwKu2yBRH

Wilkie called the ability for Morrison to stand up to Trump, with whom he’s said to be close, “a test for the prime minister.”

“It’s one thing to be mates with someone, but it’s another thing entirely to agree to do something which is entirely improper. I mean ScoMo is the prime minister of Australia, he’s not the vice president of the United States I hope. And this is an opportunity for Australia to say we stand for the rule of law and we stand behind people who stand up and speak about war crimes. Australian politicians kowtow to the U.S. all the time without realizing that our alliance would be even stronger if sometimes we said, ‘No.’ Because if ScoMo just rolls over on this and is happy for Julian Assange to be extradited from Belmarsh Prison in the UK to the U.S., well that just means Australia can be taken for granted. You actually lose leverage bizarrely by having a really close relationship that Scott Morrison seems to have with Donald Trump. Rather than putting Australia in a better position it can put Australia in a weaker position because the U.S. knows it can be taken for granted.”

Wilkie joined right-wing MP Barnaby Joyce who the previous week came out in Assange’s defense. “Whether you like a person or not, they should be afforded the proper rights and protections and the process of justice,” Joyce said.

Wilkie told “The Project,” “When someone like Barnaby Joyce thinks there’s an issue here then people should pay attention.”