New data from Turkey reveals almost all the mercenary force of “Arab militias” getting slammed by former and current U.S. officials were armed and trained in the past by the CIA and Pentagon, reports Max Blumenthal.

In The Washington Post, a U.S. official condemned the militias as a “crazy and unreliable.” Another official called them “thugs and bandits and pirates that should be wiped off the face of the earth.” Meanwhile, former Secretary of State Hillary Clinton described the scene as a “sickening horror,” blaming President Donald Trump exclusively for the atrocities.

But the fighters involved in the atrocities in northern Syria were not just random tribesmen assembled into an ad hoc army. In fact, many were former members of the Free Syrian Army, the force once armed by the CIA and Pentagon and branded as “moderate rebels.” This disturbing context was conveniently omitted from the breathless denunciations made by U.S. officials and Western pundits.

Left: The late Sen. John McCain with then-FSA chief Salim Idriss, on his right, in 2013; Right: Salim Idriss, in center, in October, announcing the establishment of the National Front for Liberation, the Turkish mercenary army that has invaded northern Syria.

According to a research paper published this October by the pro-government Turkish think tank, SETA, “Out of the 28 factions [in the Turkish mercenary force], 21 were previously supported by the United States, three of them via the Pentagon’s program to combat DAESH. Eighteen of these factions were supplied by the CIA via the MOM Operations Room in Turkey, a joint intelligence operation room of the ‘Friends of Syria’ to support the armed opposition. Fourteen factions of the 28 were also recipients of the U.S.-supplied TOW anti-tank guided missiles.” (A graph by SETA naming the various militias and the type of U.S. support they received is at the end of this article).

In other words, virtually the entire apparatus of  insurgents arrayed against President Bashar al-Assad’s regime — and armed and equipped under the Obama administration — has been repurposed by the Turkish military to serve as the spearhead of its brutal invasion of northern Syria. The leader of this force is Salim Idriss, now the “defense minister” of Syria’s Turkish-backed “interim government.” He’s the same figure who hosted John McCain when the late senator made his infamous 2013 incursion into Syria.

The “sickening horror” this collection of extremists is carrying out against Kurds is, in fact, the same one it imposed on Syrians across the country for the past seven years. Before, when their goal was regime change in Damascus, they had the blessing and wholehearted support of official Washington. But now that they are slaughtering members of a much more loyal U.S. proxy force, their former patrons and enablers are rushing to denounce them as “bandits and pirates.”

Turkey employed anti-Assad insurgents against the Kurdish YPG for the first time in March 2018, when it invaded the northern Syrian city of Afrin during Operation Olive Branch. That onslaught saw an array of heinous atrocities, from the vandalism of the corpse of a female Kurdish fighter to the looting of Afrin. These war crimes were committed largely by fighters of the defunct Free Syrian Army – the collection of “moderate rebels” once armed by the CIA.

In a video message, one of the invading fighters promised mass ethnic cleansing if Kurds in the area refused to convert to his Wahhabi strain of Sunni Islam. “By Allah,” the fighter declared, “if you repent and come back to Allah, then know that you are our brothers. But if you refuse, then we see that your heads are ripe, and that it’s time for us to pluck them.”

Also present in Afrin were the White Helmets, the supposed civil defense outfit that was nominated for a Nobel Prize, celebrated by the Western media as life-saving rescuers, and heavily funded by the U.S. and U.K. governments. The White Helmets had arrived as auxiliaries of the Islamist mercenary forces, and were operating as Turkish proxies themselves.

Kurdish media: "The White Helmets in Afrin have drawn backlash from some residents who are accusing the group of whitewashing Turkey’s occupation of the northwestern Syrian Kurdish enclave" https://t.co/Y27hVkvwE1

Hevrin Khalaf, a Syrian Kurdish legislator, was pulled from her car by the militiamen and executed along with her driver. Other Kurds, including two unarmed captives, were filmed as they were murdered by the Turkish proxies. The mercenary gangs went on to deliberately free ISIS captives from unguarded prisons, releasing hundreds of their ideological soulmates to the battlefield.

The most shocking footage allegedly showed the Turkish mercenaries sawing the heads off of Kurdish fighters they had killed. For those familiar with Nour al-Din al-Zinki, a participant in the Turkish invasion that was formerly supplied by the CIA, and which beheaded a captive Palestinian-Syrian fighter on camera in 2016, this behavior was not surprising.

Left out of the coverage of these horrors was the fact that none of them would have been possible if Washington had not spent several years and billions of dollars subsidizing Syria’s armed opposition.

When the Turkish military and its proxy force overwhelmed the Kurdish YPG this October, Hillary Clinton angrily denounced their brutality.

Back in 2012, however, when Clinton was secretary of state, she junketed to Istanbul to rally support for those very same militias during a “Friends of Syria” conference convened by Turkey’s Recep Erdogan.

She later remarked, “The hard men with the guns are going to be the more likely actors in any political transition than those on the outside just talking. And therefore we needed to figure out how we could support them on the ground, better equip them…”

One of those “hard men” is Salim Idriss, today the “defense minister” of Syria’s non-existent “provisional government” and de facto leader of the mercenary forces dispatched by Turkey into northern Syria. He has pledged, “We will fight against all terror organizations led by the PYD/PKK.”

Back in 2013, however, Idriss was lionized in Washington and hyped as a future leader of Syria.

When the later Sen. John McCain made his notorious surprise visit to the Turkish-Syrian border in May 2013, hoping to inspire a U.S. military intervention, he was warmly welcomed by Idriss, the then-leader of the US-backed Free Syrian Army.

“What we want from the U.S. government is to take the decision to support the Syrian revolution with weapons and ammunition, anti-tank missiles and anti-aircraft weapons,” Idris told Josh Rogin, a reporter and neoconservative booster of regime change in Syria.

Though Idriss and his allies never got the full-scale intervention they sought from the Obama administration, they did receive shipments of heavy weapons, including hundreds of anti-tank TOW missiles.

They were also showered with adulation by droves of hyper-ambitious foreign correspondents from corporate Western outlets. 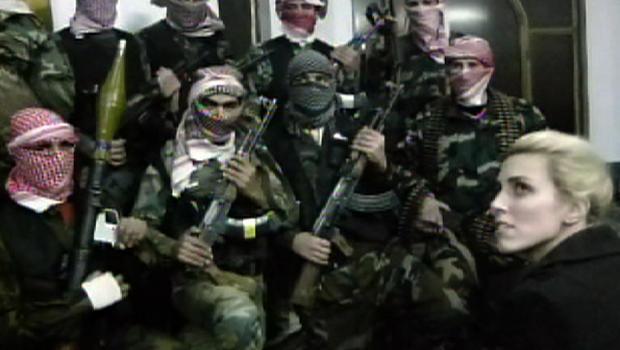 CNN’s Clarissa Ward was an especially enthusiastic promoter of the FSA, embedding with its fighters, painting them as a heroic resistance. When she returned to Syria years later, she used a top mouthpiece of Syria’s local Al Qaeda affiliate as a fixer for her unequivocally pro-opposition “Inside Aleppo” series.

Danny Gold was also among the flocks of Western reporters who embedded with the armed opposition during the height of the insurgency against Damascus. In 2013, he churned around a piece for Vice on “chatting about ‘Game of Thrones’” with a group of fighters from Jabhat al-Nusra, Al Qaeda’s local franchise.

Gold and a clique of rabid online regime change zealots spent the rest of their time clamoring for U.S. intervention in the country and viciously denigrating anyone who disagreed. Gold has, for instance, likened The Grayzone’s factual coverage of Syria to Nazi propaganda.

This October, when the Turkish invasion of northern Syria began, Gold reported that one of the FSA fighters he embedded with back in 2013 was taking part in the assault on Kurdish positions.

opened up facebook to see a fighter I had embedded with in 2013 is active in one of the Turkish backed groups attacking northeast Syria right now. He's from Ras Al Ayn, was originally in a mixed kurd/arab FSA group that fought the YPG there in 2013.

Like Hillary Clinton and the rest of the Islamist fighters’ former boosters, Gold was clearly struggling with a case of cognitive dissonance. Unable to take responsibility for promoting these extremists as they rampaged across Syria for years, or for smearing anyone who forcefully opposed the regime change agenda, he lashed out at his critics: “Almost as if war is complicated and doesn’t fit into the neat little box the anime teens in my mentions don’t realize,” he tweeted.

As members of a former U.S. proxy ruthlessly prey on a present day U.S. proxy, Western pundits and politicians are hoping that no one notices that they spent the past seven years celebrating the former group. They are initiating a cover-up, not only of the blowback unfolding in northern Syria, but of their own records.

This band of hacks is now fully exposed for foisting a bloody scam on the public, marketing some of the most brutal fanatics on the planet as revolutionaries and “moderate rebels” while they destabilized an entire region. Like the extremists they once promoted, most have somehow managed to evade accountability and remain employed.

Below is SETA’s list of Turkish “national army” militias, outlining the type of U.S, support each one received over the years: 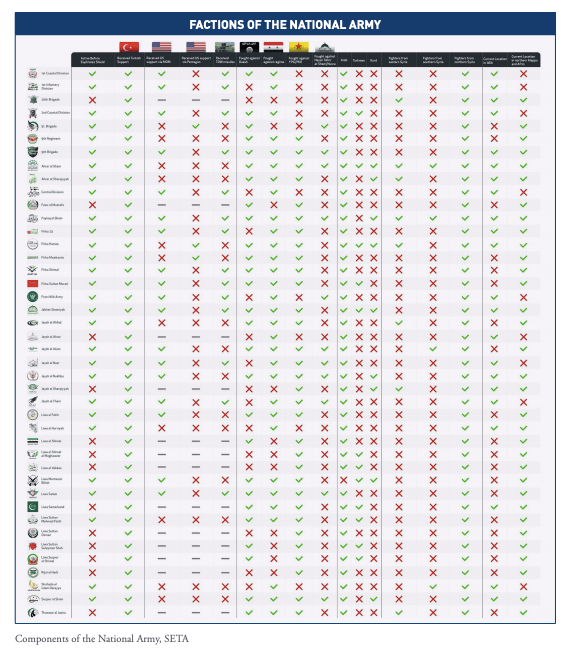 ← PEPE ESCOBAR: The Road to Damascus: How the Syria War was Won
WATCH: Episode 14 CN Live!–Impeachment and Syria →