In need of a “collusion” connection, top FBI officials have now been shown to be behind the false portrayal of an unregistered lobbyist as a spy.

Much has been written about Maria Butina, the Russian “spy” who was accused of seeking to infiltrate the National Rifle Association and other organizations to try to gain a foothold in the Trump campaign and, later, in the White House. Much of it turned out to be nonsense. Butina wasn’t a spy. She wasn’t charged with spying. She wasn’t accused of being a spy. But that’s how the media branded her. The important thing is that there actually were spies around her. And they weren’t who you might have thought.

In the Butina case, the FBI and the Justice Department needed a scalp in the midst of the frenzy about the ultimaely unproven collusion theory of “Russiagate,” and so Butina was charged and convicted of “conspiracy to fail to register as an agent of a foreign government.” Seriously. Let me explain what that means. The Foreign Agents Registration Act (FARA) was passed into law in 1938. It “requires persons acting as agents of foreign principals in a political or quasi-political capacity to make periodic public disclosure of their relationship with the foreign principal, as well as activities, receipts, and disbursements in support of those activities.” The law, the registration, and the database are meant to keep track of foreign lobbyists. Nothing more. 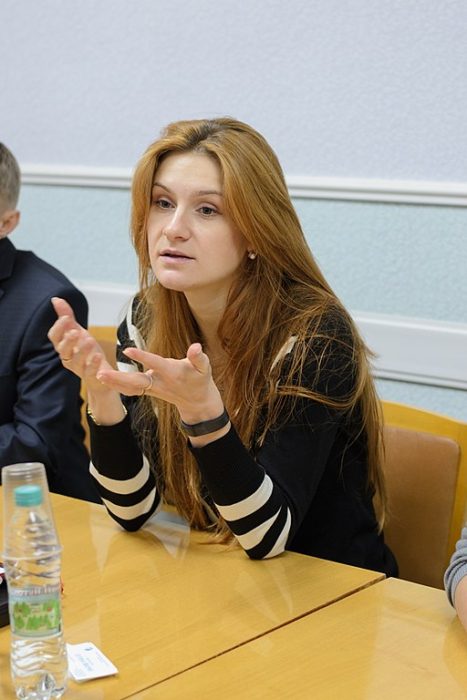 In realistic terms it means this: In 2008, I was hired by the Abu Dhabi Chamber of Commerce to write a series of op-eds in support of doing business in the city. I wrote four op-eds and they paid me a fee. But I had to go to the Justice Department’s FARA website and register as a “foreign agent,” meaning that I was being paid by a foreign government. No problem. It didn’t mean that I was a “secret agent” for Abu Dhabi. It just meant that I was temporarily in the employ of a foreign government.

Anybody can go to the FARA website and do a records search. I did one for the purpose of this article to search for people I know—attorneys, friends, acquaintances—and found many of them taking money from the governments of Libya, Chad, Jordan, Saudi Arabia (lots of them), Greece and other countries. It’s no big deal. It’s just a paperwork exercise.

In the case of Maria Butina, though, the paperwork was the hook to arrest her and to use her failure to register under FARA as leverage to get her to testify about her “work.” The problem, at least for the FBI, was that she wasn’t a spy. As things turned out, she really was just an overly-aggressive Russian grad student at American University who really, really loved guns and was trying to ingratiate herself with the NRA. But the Justice Department came down on her like a ton of bricks, forced her into taking a plea, and sentenced HER to 18 months in a federal prison: for conspiring to fail to fill out a form. The federal sentencing guidelines for a first-time offender violating this law is 0-6 months in a minimum-security work camp and a fine of up to $5,000. That, apparently, was never an option for Butina.

Forgive me if this is burying the lede, but I also want to talk about how Maria Butina got into this predicament in the first place. We know that she was very active in the gun rights movement in both Russia and the U.S. and that she sought to improve contact between gun groups in both countries. We also know that she met and began dating Patrick Byrne, the founder and CEO of Overstock.com. We learned recently, thanks to Byrne himself, that he was a longtime FBI source and that the FBI directed him to begin dating Butina. He did so. And he reported back to the FBI that she was simply a graduate student. That wasn’t good enough for the FBI, though and, according to Byrne, he was instructed to go back to Butina, to begin a sexual relationship with her, and to again report back to the FBI. He did that, too.

In the end, the Justice Department accused her publicly of “trading sexual favors” for access, an accusation that prosecutors had to withdraw. It was patently untrue. But that didn’t stop them from accusing her in the press of being a Russian spy, which she was not. And it didn’t stop the judge from giving her three times the maximum sentence called for by the sentencing guidelines.

I will ask your forgiveness again if I sound like a broken record. But this is how the FBI makes their cases. They entrap people. I’ve written extensively about how the FBI brazenly carried out a sting operation against me (unsuccessfully) that could have resulted in an espionage conviction and as much as 30 years in prison. They did the same thing to Butina.

Butina wasn’t committing a crime, so they just made something up, leaked it to the press, allowed it to influence the public and the judge, and hoped she would cave and take a plea. She did. Byrne went on CNN last week to say that two of the three people who instructed him to do all of this were James Comey, Peter Strzok, and another as-yet-unnamed individual. The operation was hatched at the top. The whole story sickens me.

With the deck stacked the way it was, there was probably nothing that Butina or her attorneys could have done to save her. The fix was in. I wish I had been able to convey to her something that one of my attorneys said to me on the day that I finally took a plea to a greatly reduced charge in 2012: “Do you know what your problem is? Your problem is that you think this is about justice. It’s not about justice. It’s about mitigating damage.” Nice system we have.

88 comments for “JOHN KIRIAKOU: In Search of a Russiagate Scalp: The Entrapment of Maria Butina”